“But now farewell. I am going a long way

With these thou seëst—if indeed I go

(For all my mind is clouded with a doubt)—

Where falls not hail, or rain, or any snow,

Nor ever wind blows loudly; but it lies

Where I will heal me of my grievous wound.”

—Idylls of the King: The Passing of Arthur, Alfred, Lord Tennyson

Such is the way Lord Tennyson describes Avalon, the mystical island where King Arthur’s sword Excalibur was forged and where Arthur would go after his final battle. Etta M. Whitney used the poem to name the city when her brother, realtor George R. Shatto, developed Avalon in the late 1880s. Of course this is Santa Catalina Island, the town is Avalon, and the wind can blow very hard (and loudly) at times. Nevertheless, it truly can be a mystical, magical island at times. 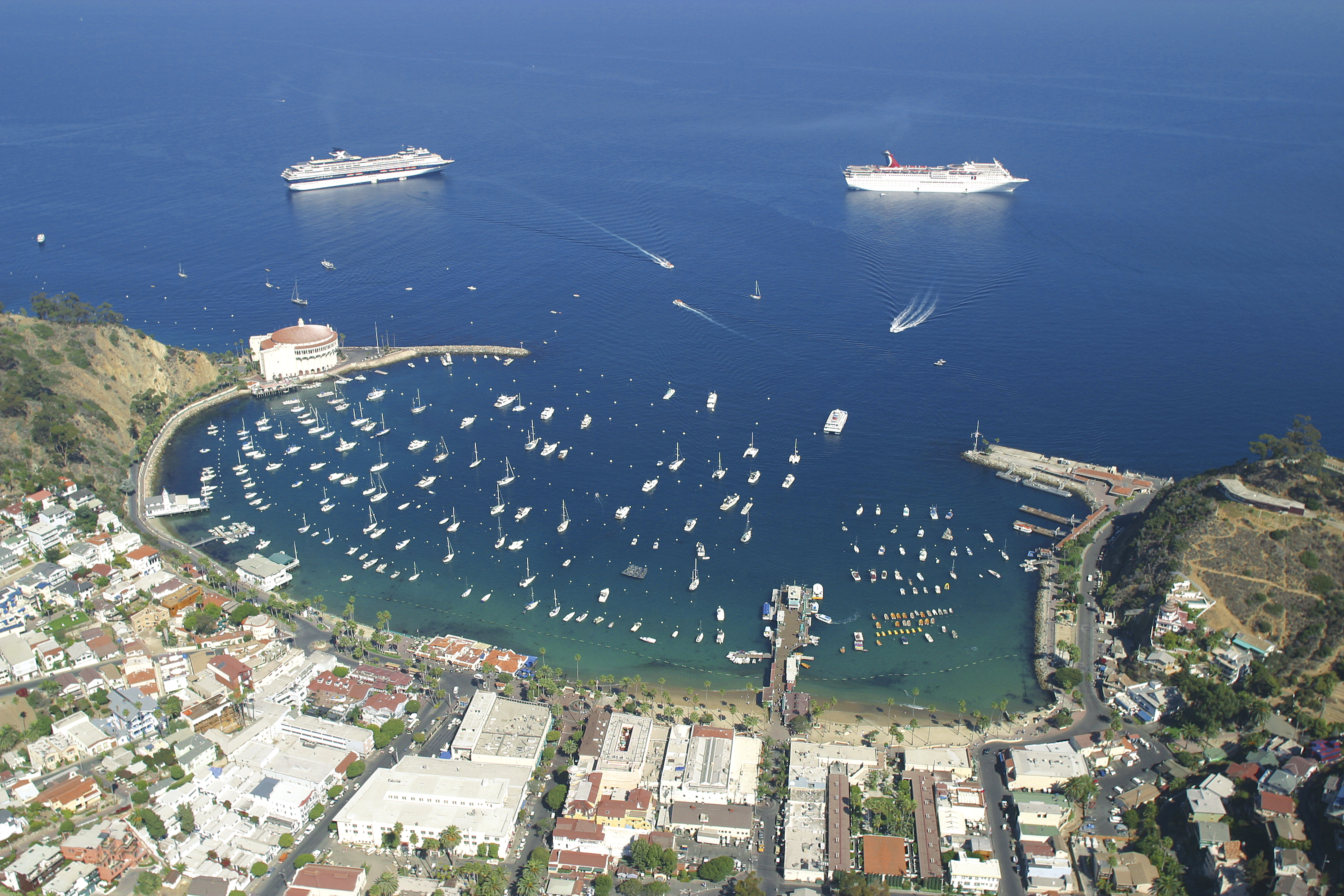 Imagine yourself just arrived at Santa Catalina Island and the romantic city of Avalon. Just twenty-two miles from Long Beach, the short, one-hour ride on the high-speed catamaran ferry was smooth and, as you neared the island, a vast school of dolphin surrounded the ferry. They followed you nearly into the bay and seemed to be offering a greeting to your arrival. The landing itself was almost anti-climatic. You haul your bags up the plank from the ferry and see, upon touching dry ground, a group of anglers directly across from you.

Intrigued, you amble the hundred or so feet over to where they are reeling in fish and are startled by the sight. Straight down from the railing is deep, crystalline water, water so clear that the image presented is that of an aquarium rather than being at the edge of a Pacific island.

In that water is a forest, a kelp forest, and amidst the tidal surge the leaf-like glades of the giant kelp are pushed into your view, leaves several yards long and attached to a plant whose size would seem to rival that of Jack-in-the-Beanstalk fame. And while the leaves reach up and kiss the surface of the water, the main body of the plant disappears down to the bottom of the sea more than 20 feet below. 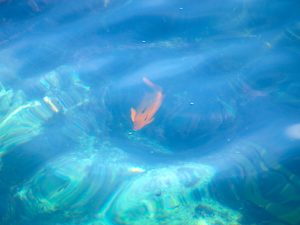 Soon you spot the fish as they languidly swim from frond to frond: beautiful, bright, orange-colored garibaldi, blue-colored halfmoon and greenish-blue opaleye. 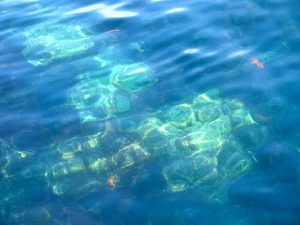 If you’re lucky you might even spot the amber-colored kelp bass, kelp perch and kelpfish whose colors so closely mimic the brownish-gold colors of the kelp and are nearly indistinguishable from the vegetation itself. Sometimes those species are found in the dense canopy that can form near the surface, sometimes they’re hanging out on the bottom just a little out of sight. 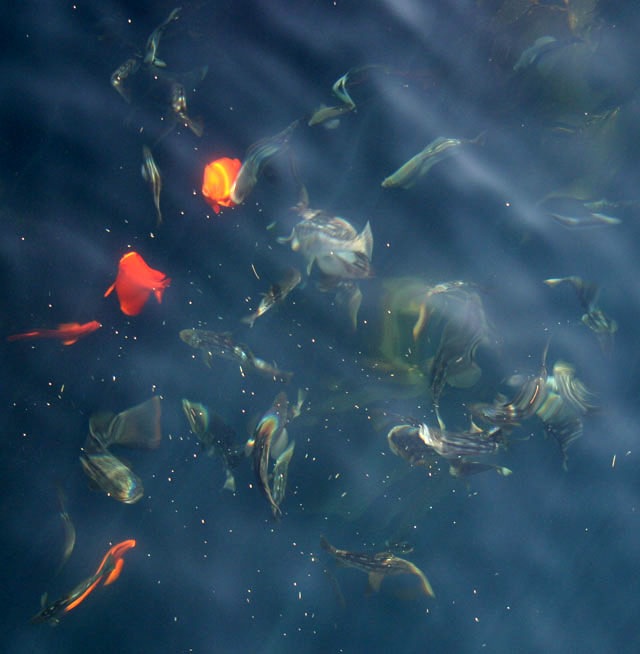 Rarely is a California angler presented such a sight, especially a California “pier rat,” but here that view is the norm. Rare is the time when Catalina’s waters aren’t clear and the fish not present in somewhat unbelievable numbers. 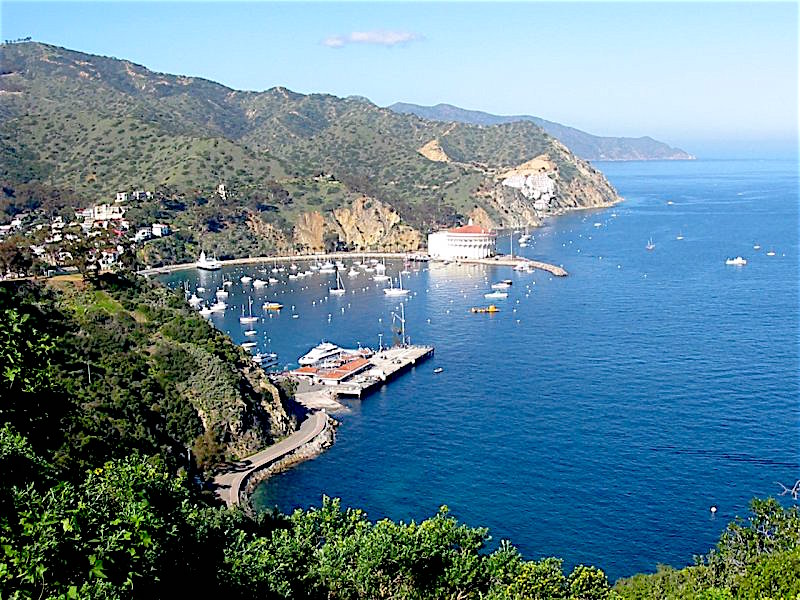 A road winds along the shoreline from Pebble Beach to Avalon Bay, past the Mole, and into the city.

Environment. In the late 1960s Avalon decided to tear down the old “Steamer Pier” that had been used for over 60 years to unload passengers from the S. S. Catalina (and other ships). The pier, located near the Green Pleasure Pier, was old, in need of repair, and took up too much space —  space on the small beach that could be used by bathers; space in the bay’s waters that could be used for additional yacht moorings.

Instead a Mole (basically a jetty or breakwater) would be built at the southwest corner of the bay. A concrete pier would then be placed over the Mole, which would be the new “pier” for landings. The S. S. Catalina would tie up on the ocean side of the Mole and disembark passengers directly onto the pier. That was the plan! However, almost from day one, the landings were both difficult and, at times, unsafe. 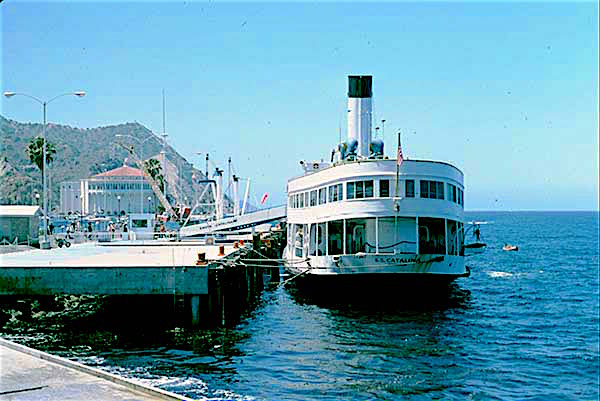 A scene at the Mole

Members of the Avalon City Council, cringing after viewing damage to their new $2 million steamer dock caused by two accidents in the past 11 days, are perturbed by the prediction, “the worst is yet to come.”… On July 19 as the 299-foot cross-channel cruise ship was tied up at the new wharf surging seas shoved the vessel against the pilings, causing nine of them to snap like matches. Fearing for his ship, Capt. Lloyd Fredgren ordered crewmen to use a fire axe to chop the eight-inch nylon stern line as so he could head for the comparative safety of the open sea. —Long Beach Independent, July 28, 1969

The piles were fixed but the problems continued. What to do? The Steamer Pier was now gone but the city still had the Mole. Why not make the landings on the inside or bay side of the Mole since the Mole provided protection against wave and surge? 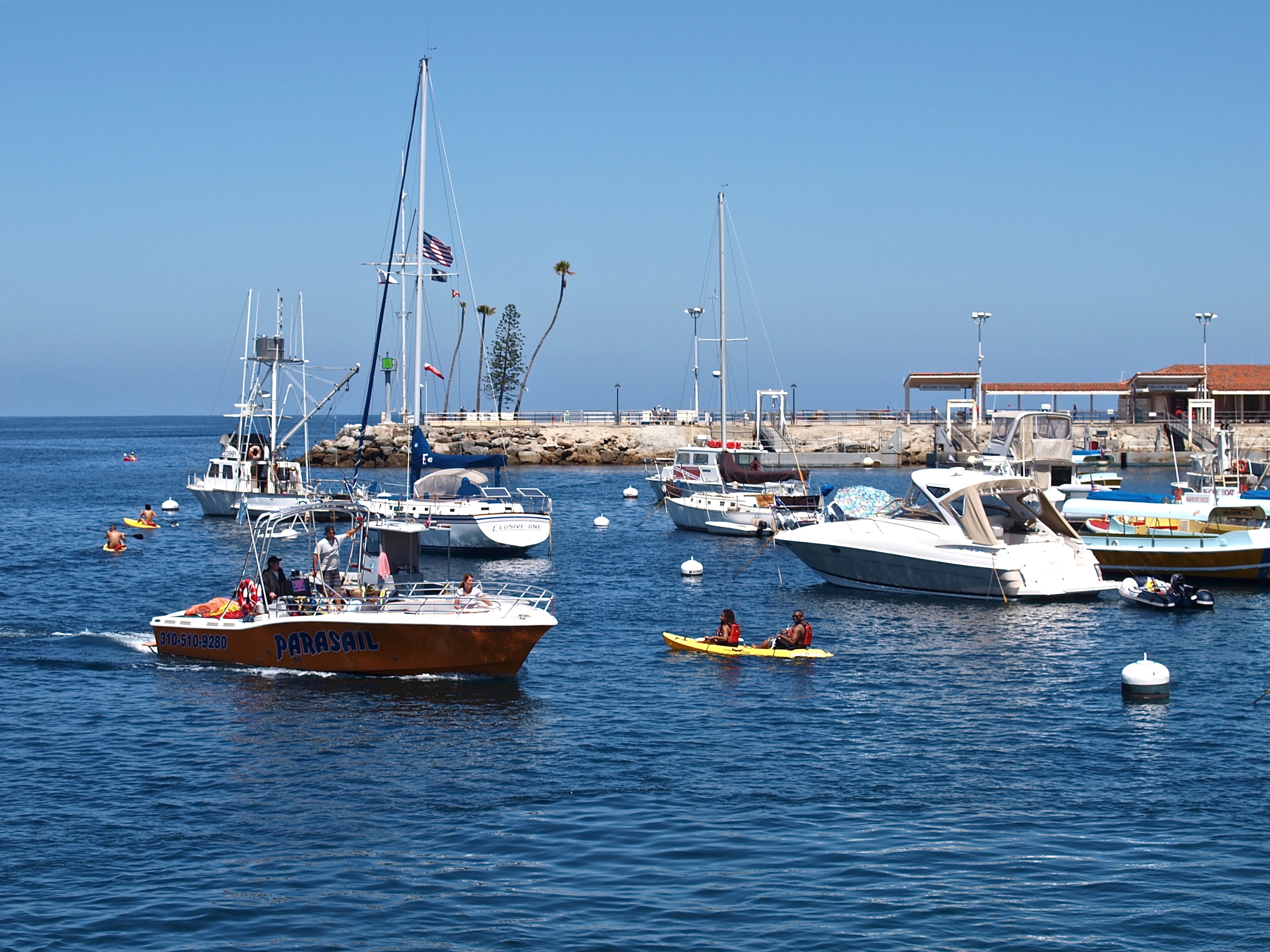 The Mole’s backside as seen from the Green Pleasure Pier. Landings for the various ferries are on the inside of the Mole.

Ultimately a number of landings (floating docks) were constructed just inside the Mole—which is what is seen today. They vary in size and can handle all of the various ferries and landing craft that are too big for the Green Pleasure Pier.

The Cabrillo Mole is still used by passengers on the largest ferries (since the main and largest landing is adjacent to the Mole). Well-kept restrooms, storage lockers, ticket offices, and a snack shop are all located on the Mole.

Most important for our story is the fact that the ocean side of the Mole, the part deemed unusable for boats, offers great public access for recreational fishing—in an environment unique for a California pier. A bonus for both in-state and out-of-state visitors is the fact that the pier is considered a public pier and no license is required. 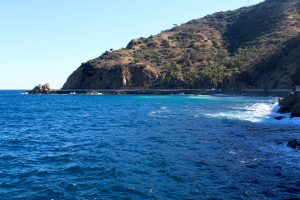 To the right of the Mole (when looking seaward), just a short distance away, sits Lover’s Cove; a long established state reserve (and now marine protected area) filled with an abundance of sea life—fish, anemones, sea stars, nudibranchs, etc. It runs to Abalone Point.

The cove is the favored home for the glass bottom boats and the so-called submarines that travel out from the Green Pleasure Pier. The favorite fish of these craft is the brightly colored garibaldi, the goldfish of the sea, fish that are easily spotted in the water by the tourists. Large sheephead and bass are also often spotted along with myriads of smaller species. 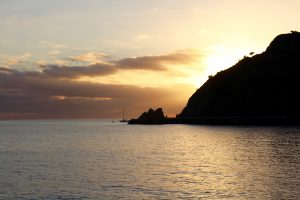 The fish are stuffed! Stuffed? No they aren’t artificial fish placed there to fool the tourists. No, they are simply stuffed with food. The glass bottom boats have tubes that allow passengers to drop fish pellets down to the fish. The fish also get a steady diet of goodies, especially peas, courtesy of the snorkelers who have made the cove their favorite spot. The daily feedings tends to concentrate fish in the area and helps explain the numbers of fish at the nearby Mole, it also explains why peas are readily accepted as bait for so many species at the Mole.

Many a visitor will wet his or her fishing line and hopefully, if the fish like what they see, they will grab one of the angler’s baits or lures. Of course then you have to keep the fish, line, and sinker out of the kelp, a nearly impossible task at times. It depends on the area you are fishing, the direction of the current (which affects the way the kelp is laying), the surge, the size of your fish, and the strength of your line, but it can be done—sometimes.

As in real estate, the key to the Mole’s success is location. Catalina Island has from its earliest days been a mecca for California saltwater anglers. The island is close to deep water and closer than the mainland to currents flowing north from Baja. Although water temperatures mimic those found along the coast, the “cleaner” water and associated currents seem to provide a beneficial home to many species, both resident and non-resident species. Thus a greater number of the more southerly pelagic species, i.e., bonito, barracuda and yellowtail show up at the island and some venture close in to shore (and the Mole). Occasionally, the warmer water may even attract a species that’s traveled north during an El Niño year and settled into the island’s environment (i.e., largemouth blenny). You just never know. 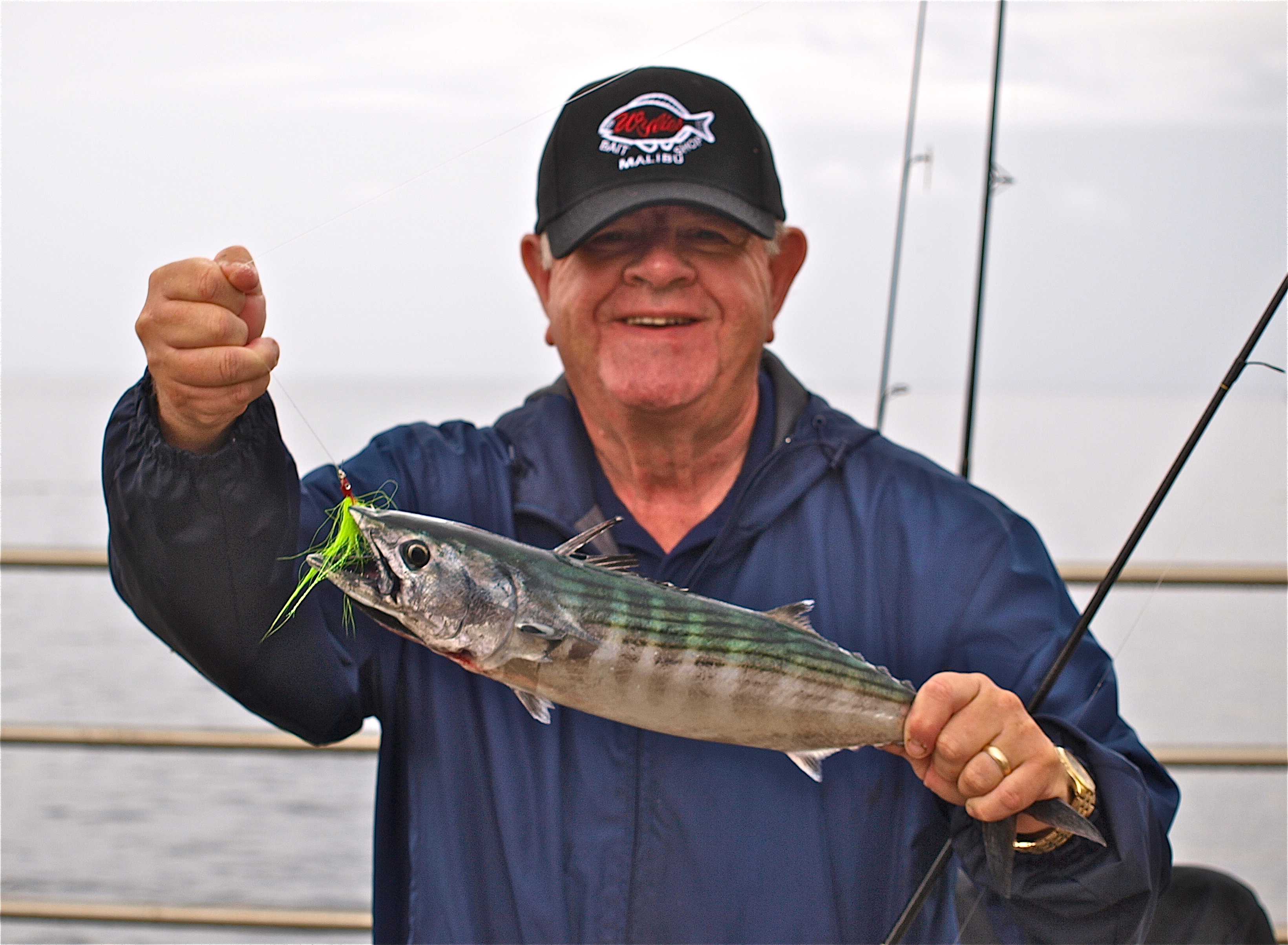 Important is the rocky shoreline structure under the Mole and the kelp that typically surrounds the Mole. The rocks attract rock-frequenting species while the kelp environment itself attracts many different species. Few mainland piers are built over or even next to rocks and none of the mainland piers see the numbers of opaleye, halfmoon, sheephead, ocean whitefish, kelp bass and several other species seen at the Mole. 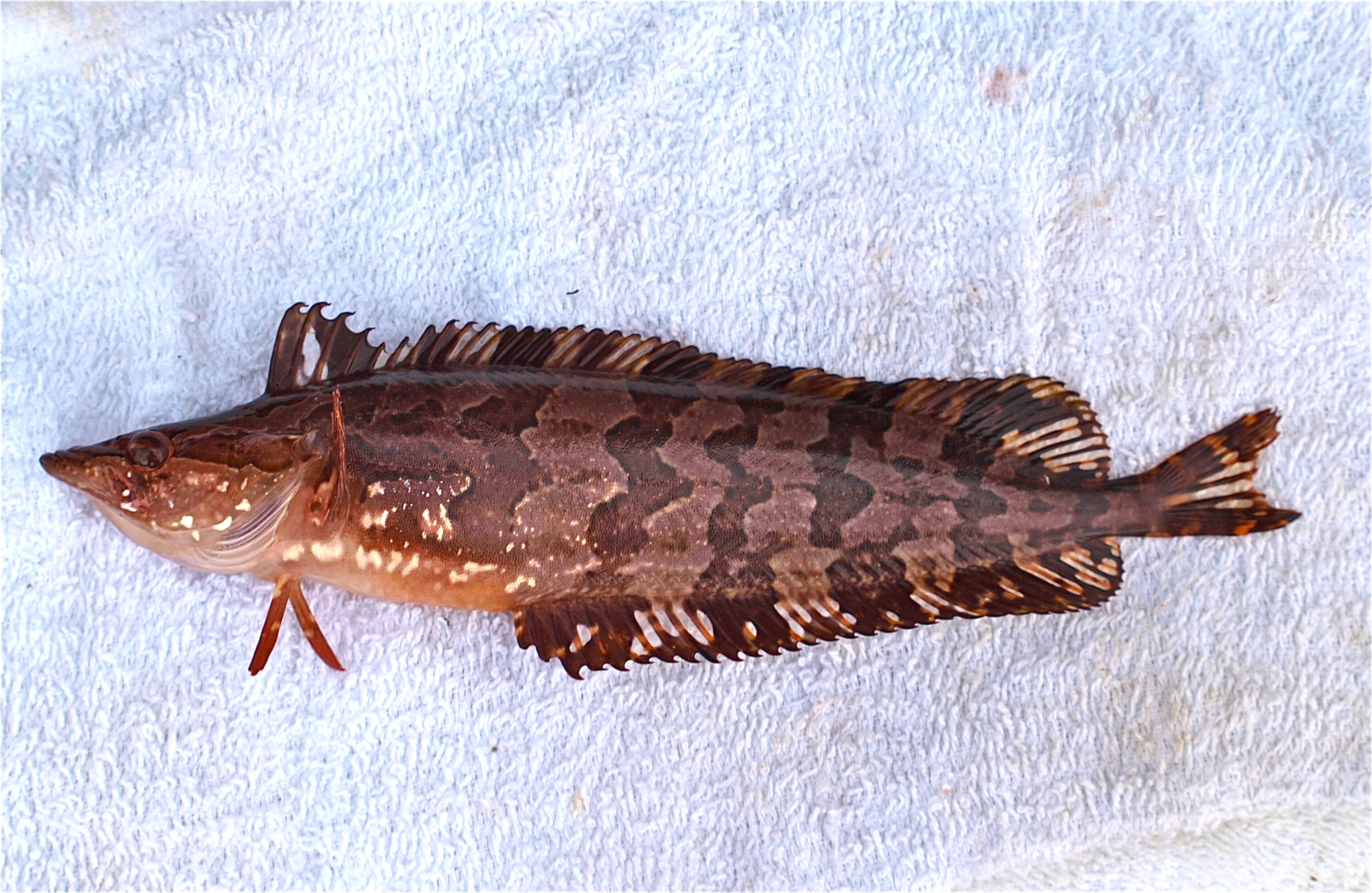 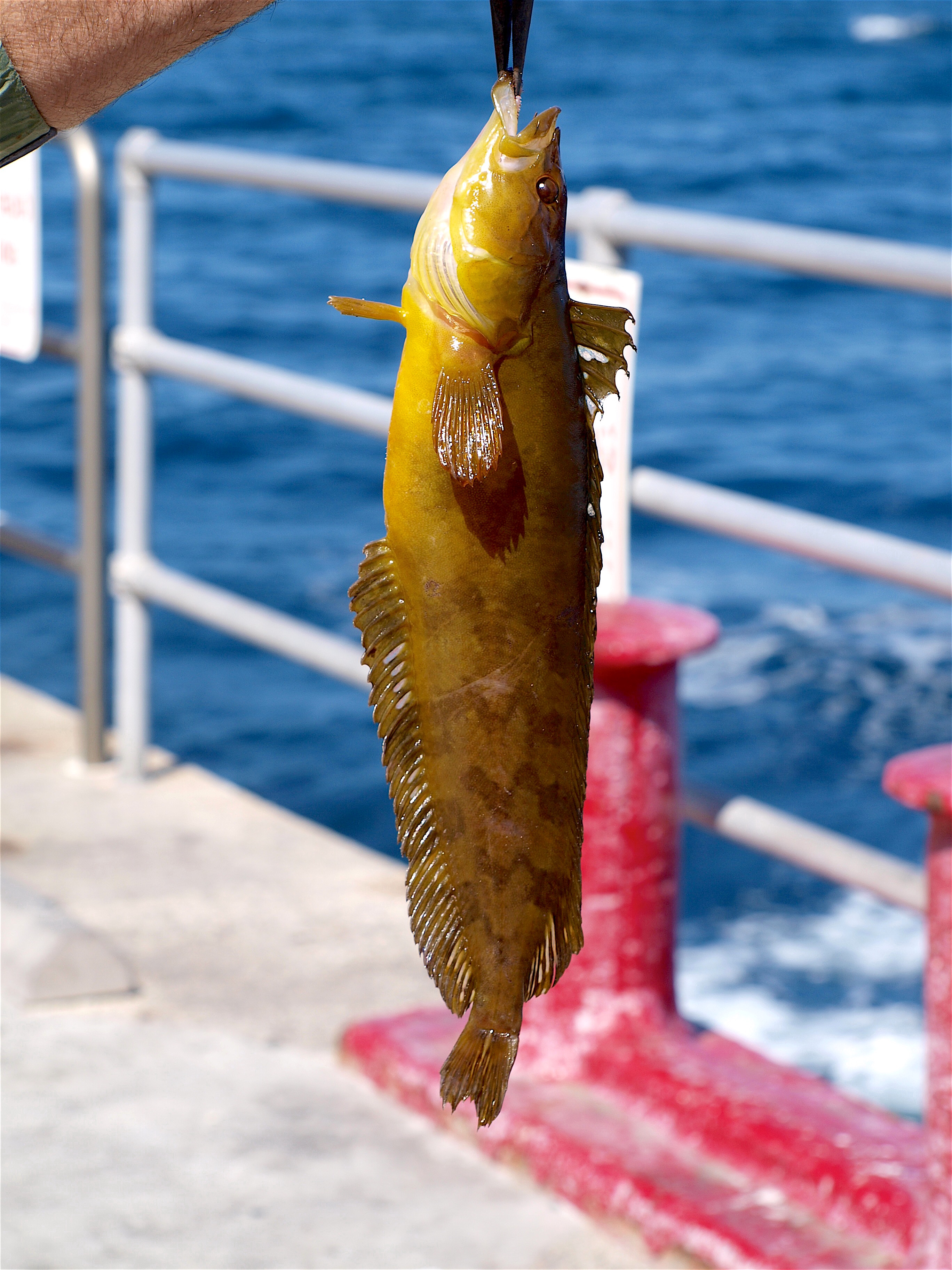 Lastly is water depth and while the bottom around the Mole is fairly shallow, Catalina is an island and sees a quick drop-off in depth. Water depth tends to be around 20 feet deep at the Mole and ranges between 20-30 feet deep in Lover’s Cove, between the Mole and Abalone Point. But, the depth drops to 70 feet and then to over a hundred feet deep not too distant offshore. If looking at the channel leading into Avalon Bay, the mid-point between the Mole and Casino shows a depth of 96 feet.

One result can be good runs of pelagic species and occasional sightings of the bigger species. Giant sea bass are common to the area and during 2015, an El Niño, warm-water year, two wahoo were spotted in the cove from one of the Catalina submarines. Unverified reports said a dorado (aka dolphinfish or mahi mahi) was also seen. Squid can spawn in nearby waters and when they do the white seabass may show in an early morning visit. Again, you just never know.

The fact that the Mole sits on a tourist island also yields an ambiance that is hard to describe but easy to feel. During the day it can be a crowded ocean. Passing through the Mole’s waters will be glass-bottom boats, the semi-submersible submarines (yellow and red), kayakers, and yachts of every size and shape. 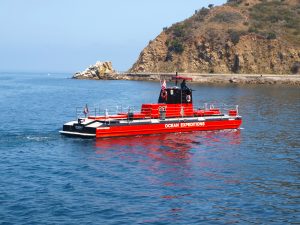 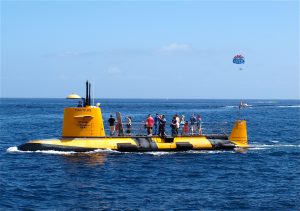 Up in the sky, often high in the sky, will be adventurous people hanging from their brightly colored parasails. 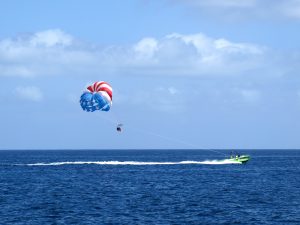 On cruise ship days, the large ships will be anchored slightly offshore. Eventually a flotilla of small craft (tenders) will invade the harbor, tie up to the smaller landings by the Mole, and the hoards will stream ashore. Soon the shops and restaurants along Crescent Avenue will be filled with happy visitors and smiling entrepreneurs. 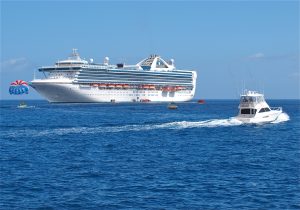 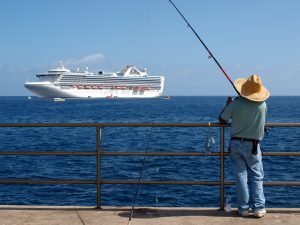 At the Mole there will be a parade of ferries coming into and leaving the bay. With them will be what at times seems to be a never-ending group of visitors to the island. Inevitably some of the visitors will wander over and ask a question or two. How’s fishing? What do you catch here? What’s that orange-colored fish? What equipment do you need? Most will be courteous. 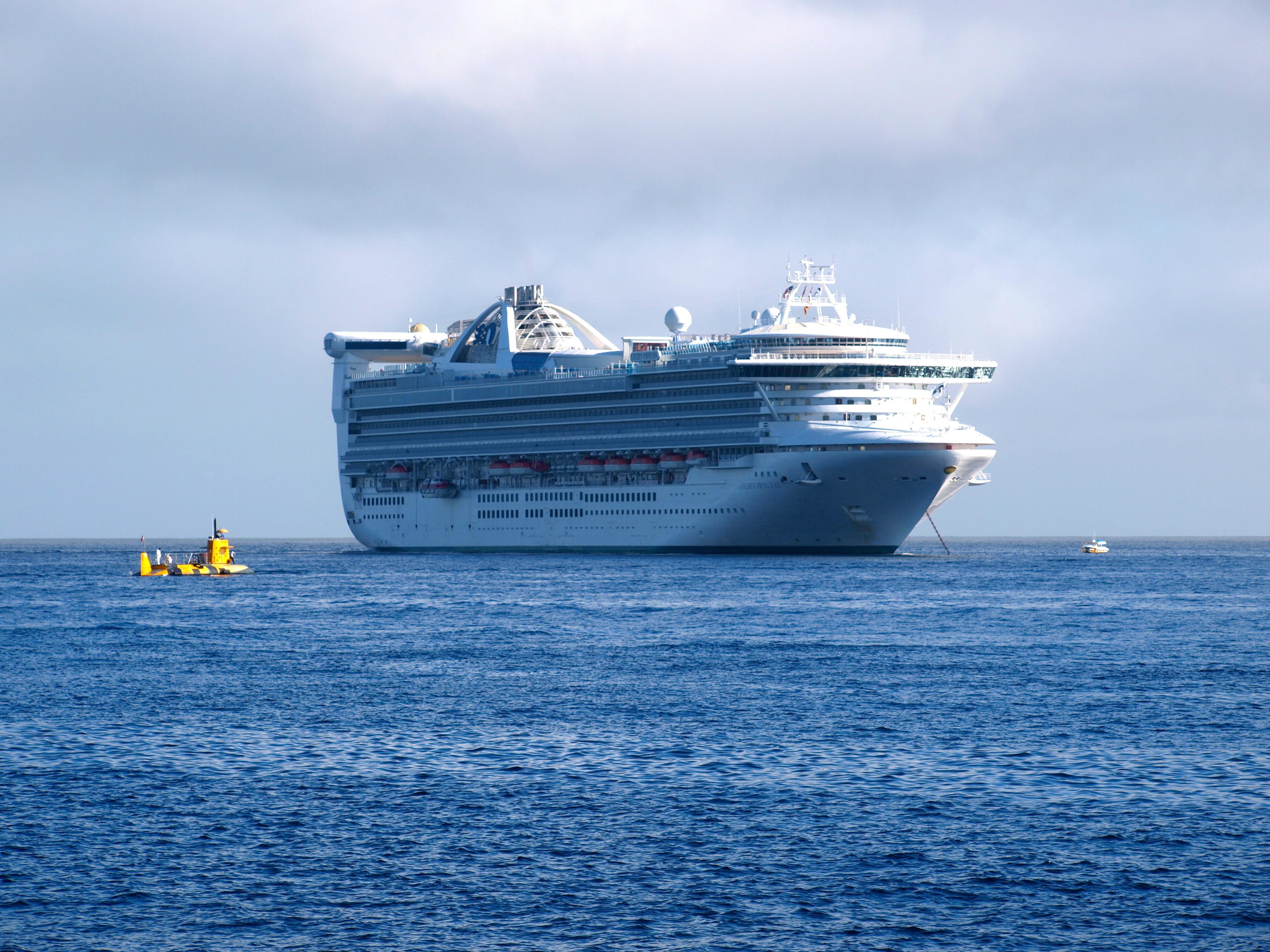 I hope the sub doesn’t try to sink the ship!

Luckily at night you’re usually alone or at least mostly alone. You’ll have the ocean to yourself, the stars in the night sky, and the lights surrounding the crescent-shaped bay to keep you company.