Species:   Heteropriacanthus carolinus  (Cuvier, 1829); from  the Greek heteros (different), prion (saw), and akantha (thorn) and the Latin carolinus (in reference to geographic area).

Size: Most that are seen are around 8 inches in length; maximum length about 20 inches.

Range: Circumglobal in tropical and tropically influenced seas. Common in island habitats throughout the central Pacific. In the Eastern Pacific found along island habitats from off Baja California to the Galapagoes; probably uncommon along coast of Mexico, Central and South America, questionably to Chile. 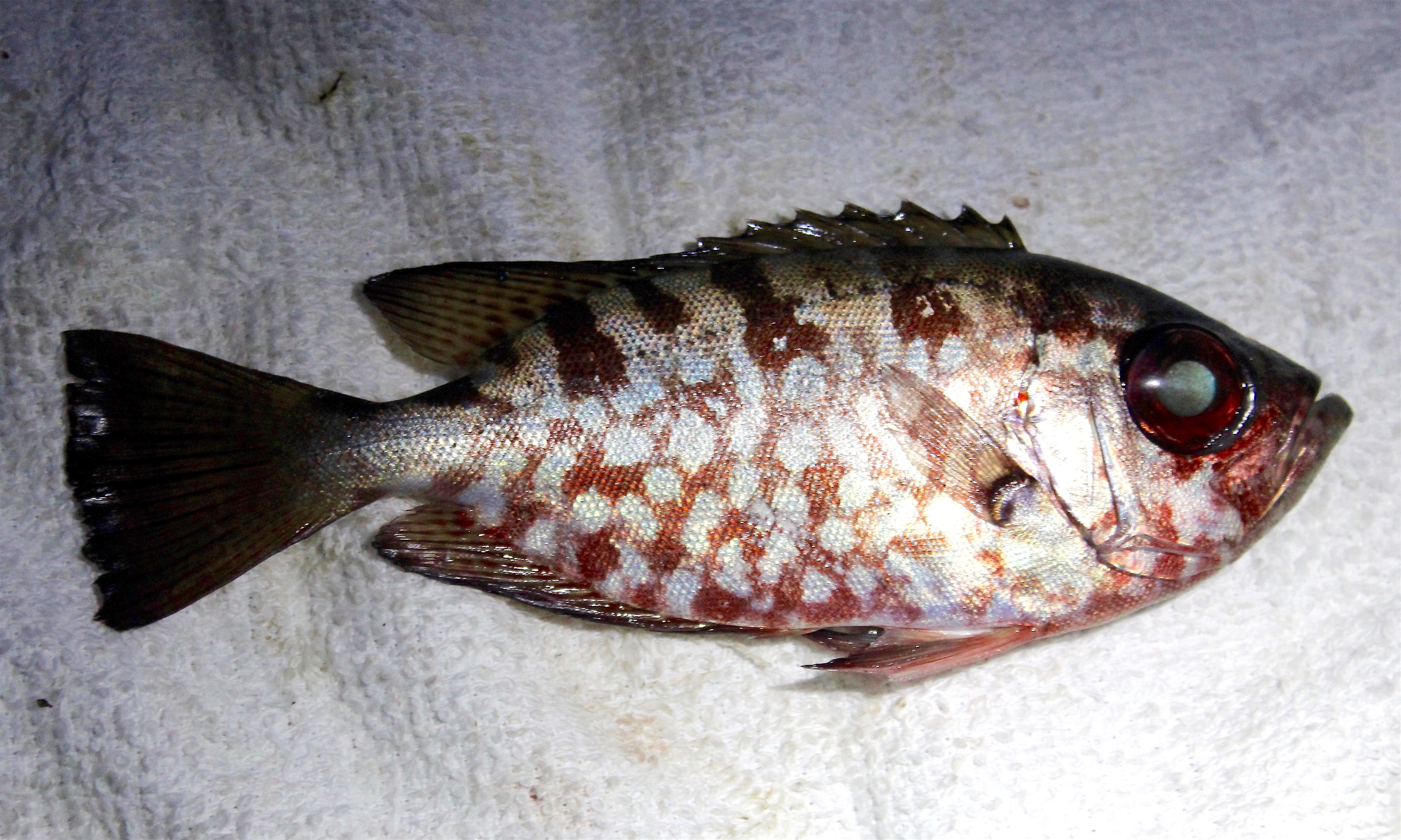 Stressed fish prior to release

Habitat: Common in lagoon and seaward reefs, primarily around islands. Typically found in water 10 to 100 feet in depth although recorded to a depth of about 900 feet. Under or near ledges by day.   Nocturnal, feeding mainly on octopi, pelagic shrimp, stomatopods, crabs, small fish, and polychaetes . Solitary, during the day usually occurring singly or in small groups; at dusk it may gather in large numbers. Known to produce sound.

Piers: In California, only recorded at the Cabrillo Mole, Avalon, Catalina Island.

Shoreline: Not recorded in California.

Boats: Not recorded in California.

Bait and Tackle: The one caught was at night on a piece of shrimp.

Food Value: Marketed in fresh fish markets although some reports of ciguatera poisoning

Comments: In December 2017, I made a trip to Avalon on Catalina Island. The last afternoon was spent fishing on the Cabrillo Mole with the usual species being caught. At 5:30, with darkness descending, I stopped fishing and headed over to get a cup of hot chocolate. Upon my return I packed up the gear and sat down to relax and wait for the last ferry back to the mainland.

My rest was interrupted when I saw a nearby angler pull in a fish. I walked over to see what he had caught which, I expected, would be a type of rockfish or a salema, both of which hit well at the Mole after it is dark.

However, the fish turned out to be a species that was new to me (and a quick check of my reference book did not reveal a picture). My first thought had been of a juvenile giant sea bass (it was only 5-6 inches long) but the fin structure was wrong. My next thought was of a popeye catalufa, the fin structure was about right but the color was wrong. My friend Hashem and I talked the angler into letting us take a couple of quick photos before returning the fish to the water.  Since I am always seeking out new species, that fish, even though I didn’t catch it, put the final cap on the trip.

Upon returning home I sent a copy of the pictures to Milton Love at UC Santa Barbara for identification but he said he’s never seen it before. He said he would send the pictures out to a network of experts who should be able to identify it. It took a while but eventually it was decided that the fish was probably a  Pacific glasseye, Heteropriacanthus carolinus, a fish more common to Indo-Pacific waters like Hawaii and Australia.

Unfortunately, we had returned the fish to the water which Mr. Love let me know is generally good but in this case might have provided a definitive answer to the species (me bad!). Nevertheless, it may be the first recorded sighting of the fish in California.

“The glasseye fish Heteropriacanthus, previously known as a monotypic genus, is now divided into three species based on morphological and genetic features. After examination on the type specimens and literature, herein we resurrect two junior binomens, H. carolinus (Cuvier, 1829) from the Indo-Pacific Ocean and H. fulgens (Lowe, 1838) from the northeastern Atlantic Ocean. Heteropriacanthus cruentatus (Lacepède, 1801) is now considered to be restricted to the Atlantic and southwestern Indian oceans. In light of these observations we discuss the evolutionary history of the genus.”

“Glasseyes or glass bigeyes (Heteropriacanthus) are a genus of the bigeye family found in all tropical seas around the world. It occasionally makes its way into the aquarium trade. It grows to a size of 50.7 cm (20.0 in) in total length…  All glasseyes used to classified in a single species, Heteropriacanthus cruentatus…but recent morphological and genetic analysis indicates that glasseyes should be divided into three species: Heteropriacanthus cruentatus (Atlantic Ocean and southwest Indian Ocean), H. fulgens (northeastern Atlantic), and H. carolinus (Indo-Pacific).“