I know I have practically zero fishing experience at Dumbarton. But I can’t deny physics. No animal would want to withstand the current without assistance of structure or by leveraging the isoclines where the relative motion of water is slower. Has anyone tried this?

Maybe this short summary makes a little more sense. A boater’s approach to getting sturgeon. I come down searching an area Dumbarton pier for example right where your line is cast. It is the incoming tide the middle current is really strong. I see some fish hugging the side of the channel on the fishfinder. Instead of stopping and anchoring where I see the marks I’ll go past it with a tide an estimated distance to where I can anchor prepare my baits and get them in hopefully by the time the sturgeon travel through. I guess to sum it up, the bottom line is they are always moving in the direction of the tide.  Jason “bayrunner”

One thing about it — the mouth [of a sturgeon] is not designed to feed in suspension. The vacuum tube is on the bottom, definitely making this creature pick stuff up from the floor of the bay. I just can’t even picture a sturgeon picking something up that’s even 2 feet off the bottom… Also, these giants cruise with minimal effort, sort of like a big whale when it’s just cruising. Damn they have power though and you feel it when you hook one. I’ve never had any fish come close since that day.

Jason: Don’t worry about the wording. I understood just fine. What you’re saying is that the sturgeon are constantly on the move with the tide and never hit suspended and Stinky says it’s because of mouth geometry. According to DFG, sturgeon do hit floating food, and they found sturgeon feasting on a float sack of onions in the delta!

Energy-wise, moving with the tide makes lots of sense, but that means the window for foraging is relatively small and coincides with the transition from strong tide to slack tides.

One thing I don’t understand is -when- they eat at Dumbarton. If they are eating these small bottom crustaceans, then feeding time must coincide with the emergence of critters in the Bay flats. The small shrimp must be burrowed during dry times (extremely low tides) and during torrents when there is large undertow (i.e. during outgoing tides with southerly winds). The little guys come back out to feed on the bottom at the beginning of a slack tide and that’s when the sturgeon must come through.

But what about the times when the tides are unfavorable? A big sturgeon needs to eat a lot of food to maintain energy to swim in these waters. Can we catch them during the “off times” or do they not even bite during those times?

Here’s my guess. Assume that a 20-lb sturgeon (and growing) needs to eat at least 1 lb per day of shrimp or other food. That’s about 100 morsels per day for these small ones. If a sturgeon can find a morsel every 10 sq. ft of bottom area, to get 100 morsels means covering a 1000 sq. ft of area for each sturgeon. That’s not that big, just a 33 x 30 patch of water per sturgeon. That can be covered in less than 15 minutes…

Okay, so the numbers do compute sort of. This is a waiting game. The sturgeon can eat enough just in foraging during transitional tides to survive. Even if food is more scarce they can still forage during the transitional tides and eat enough to get fat. This means that the best way is to use a multi-hook rig with lots of tasty morsels on the bottom. Do you guys ever use weighted hooks to keep the bait on the bottom?  Gyozadude

Date: September 19, 2001; To; PFIC Message Board; From: Jason chin;Subject: Dumbarton

I tell you man keep going to Dumbarton. That pier will pay off. It is one of the best piers anywhere around here for sturgeon. Put in those few hours there would be your best bet. I only went to that pier for I’d say about two years rarely fishing any other spots before I had a boat. I’ve landed more sturgeon consistently there than any other spot from shore or pier. Jason “bayrunner” 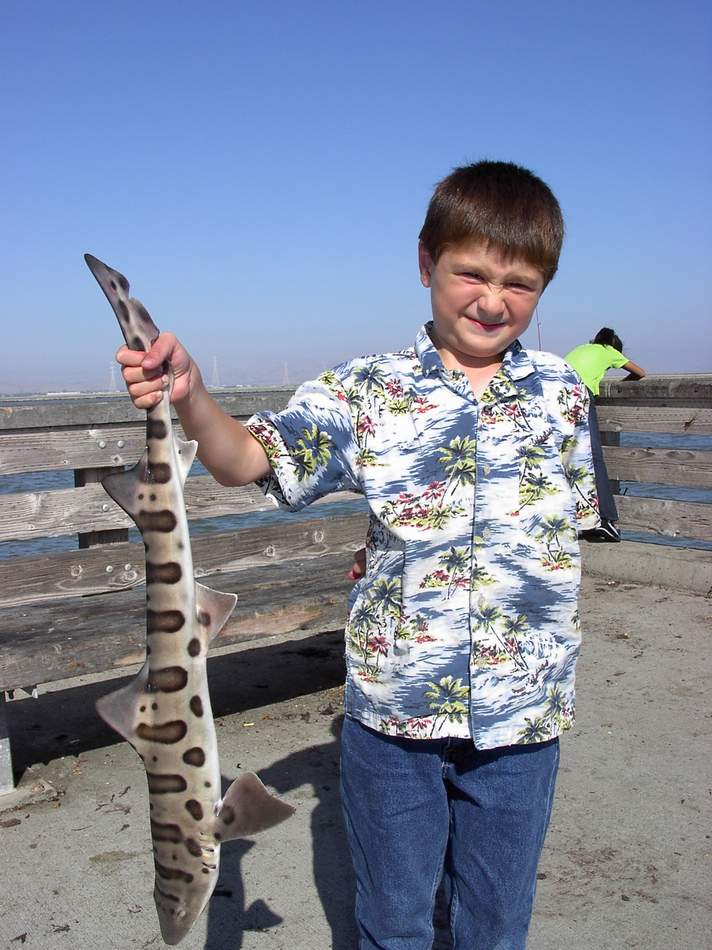 Dumbarton pier seems to produce some consistent catches of leopards. Every time I’ve gone, I’ve seen someone hauling up a leopard or two or three, usually near the end of the pier. A legal keeper might be few and far between, but there are quite a few caught and quite a few keepers as well. Live grass shrimp, fresh grass shrimp, squid, cut mackerel or anchovy are all good baits if you can find them. Getting enough bait on a big 7/0 hook is one thing. Another is to cast it as far off the end as you can “into the channel” everyone talks about. Another thing is timing. The best times seem to be in the hour just before or after the top or bottom of a high or low tide.

Arrived at my usual time of high noon. Blustery day, threatening clouds, but stayed dry! There was a wide-open bite of 7-gill in the morning, according to some others. Saw 8 of them walk off the pier with their proud owners. Didn’t measure them myself, but they seemed to be up to 3 feet in length. Saw a just-undersized leopard shark caught. The outgoing tide was creating a very strong current, flood tide… Most people were using ghost shrimp, but a few were using mackerel chunks and squid. Not sure what caught the 7-gills…

Myself? I was totally prepared for “the skunk.” It seems that most of the decent fish are caught in the mornings at Dumbarton… I lost one of my wire sturgeon rigs to a snag. Used my last rig with some ghost shrimp. After about half-hour, I decided to check bait and noticed slack. As I reeled in, the line stopped and rod started to bend. I assumed that I snagged so just kept reeling. Then line started peeling out with my pole bent hard. Fish was about 40 feet out and started to circle…. Everyone around me started giving conflicting advice. “Sturgeon!” “Let it run.” “Bring it in!”.. I didn’t think it was a sturgie, because it was circling instead of just swimming straight out.

Anyway, after a 10 minute battle, it turned out to be a large bat ray. The current was so strong that even though I had him at the surface and unable to swim, the pole was bent hard! Whew!!!! Unfortunately, I left the crab net in the car assuming someone else had one…sigh… Another pier rat had a rope with a hook on it and managed to snag my wire leader… About a 33” wingspan. Weighed it at home and it came to about 25 lbs. Is this about right? I was using a postage meter and it was very difficult to get an accurate reading. Fried some up… Wonderful texture, but the taste was a bit ‘fishy’. I’ll read the archives for some tips on cooking… I did bleed it and ice it right away, though… For the record, that’s the last bat ray I intend to keep. They are just such a beautiful creature, I was feeling bad later…especially when I found out they don’t taste like halibut!!! 🙂 Cheers, Aaron

Nice Report Yes, the 33″ and 25# are on the mark. Bat rays are amazing. I’m constantly surprised when I reel in a monster after a good fight: it’s usually smaller than I’d fantasized. Currents really can step up the action and the challenge. I’ve experienced rays that rested while riding the current. I’m still fighting and they’re taking a break. At Fort Baker, three of those in a row will have you thinking about calling it a day. Seems like Dumbarton is the place to be for a good battle these days. Ah, that south bay mud! 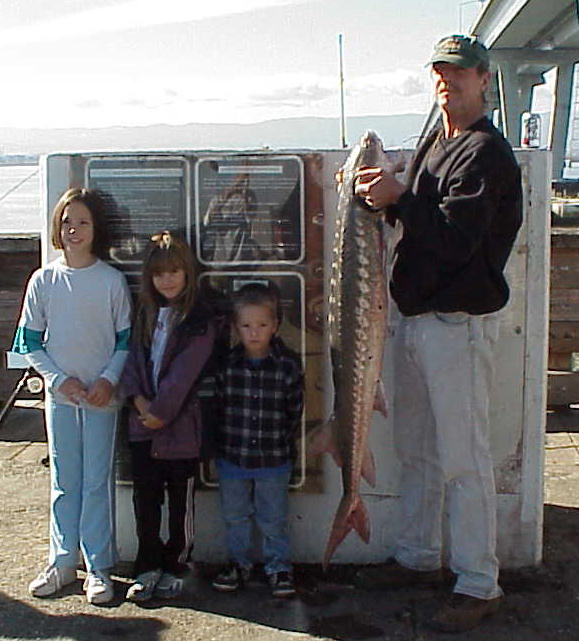 Landing sturgeon from a pier/platform. The pier is by far the hardest place to land large sturgeon. Barnacle covered pilings, weaving in and out of lines, and a strong current on top of everything else. Couple of things I noticed: The braided lines in this situation I believe prevail over mono. Heavy braid 65 and up is great in this situation because at the last minute you can really put a stop to that fish from going under. I save the light tackle for the boat. You just can’t stop em’ sometimes from going under but this will help.

Snaring fish. The only way I’ll try to get any sturgeon 46” on up off a pier is with a snare on a rope. Like striperkiller is describing, mine consists of a lasso made from a bike lock-up cable. One end goes through a loop so if you pull it cinches down. A heavy-duty paper-clip attached keeps the loop open while I drop it down before I’m ready to set it. So know sturgy is laying down at the edge of the pier looking like he/she is ready to be hoisted up. Too many times have I seen the snare go down and the instant it hits the fishes nose disaster, the fish thrashes a little more and now you have a tangled line crossed around a snare that you have to fix while your chances look slimmer and slimmer. I drop it down first before I lace it around the pole and get that shock out of em’ let them do there thing and then it’s time. Slide it around the butt of your rod and just like Joe said once it’s pass the first fins set it. Loosen your drag so in case it slips out on the way up you still have a chance. Which has happened to me with my drag locked down and oops SNAP. One time we had one around 65” off Dumbarton and the first snare went down but the fish moved and it was too late it was snared around the tail. This is not a good way to hoist em’ up because the weight of the belly hanging down could make ‘em slip out. Not to worry we dropped another one down and got that one around the head and pulled ‘em up with two snares.

Fished Dumbarton from 1pm till 5:40pm. Catch: 1 skate on Pile Shrimp. Other anglers catch: two skates, one 54” Sturgeon on squid which I landed with my new sturgeon snare (home made at OSH). Heard of two other sturgeon caught the day before on squid as well (both shakers) along with the sturgeon caught on squid next to me on Christmas Eve. Must be a big school of squid in for some reason it seems to be the hot bait out there. Slider rig with sturgeon leader. Not sure if it was whole are partial squid. I have been making my own sturgeon/shark leaders for some time now and it’s much cheaper and stronger than any other store bought rig. Not to mention it’s very easy. Nufo

An average of one stugeon a day for the entire pier. Best bait has been squid but don’t count out herring or shrimp. Sharking has been slow with a few skates still being caught. I believe Dumbarton is a good bet right now and fishing off the end and casting towards the channel seems to be the best. Make sure you bring a sturgeon snare. Nufo