I’m not sure if the music was punk, grunge or something altogether different, but it was corybantic, loud, obnoxious to these old ears and terribly off key (I think). Yet it somehow seemed perfectly suited for the area. There I was in this industrial, dirty and usually unnoticed area sharing the space with about fifty or so green-haired, purple-haired, and spike-haired teenagers. Most were simply standing around watching but a few had guitars with LOUD amplifiers. Occasionally a so-called musician would blast off with some strange concoction—including a truly bad copy of Jimmy Hendrix’s rendition of the national anthem.

Still, it all seemed to fit the locale. The small pier was heavily covered with graffiti, the small park at the foot of the pier was unkempt, and the old streetcars in the lot across the cove had been painted in ’60s-style psychedelic colors and patterns. Neither the land and pier itself, nor the shoreline area (and water) which was littered with broken pieces of concrete structures, old barrels, supermarket carts and other debris, seemed to offer much to attract anglers. But surprisingly it did because of its lack of wind and the fact that it sometimes offered surprisingly good fishing. When the winds would disrupt fishing in other areas, the pier would become an alternative site for those fishermen familiar with its location. The water was almost always calm and fishermen themselves were rarely disturbed by high winds.

Unfortunately, the visit described above did not present good fishing: the tide was too low (I was basically staring down into a mud flat) and the fish were in deeper water. Little did I know that it would be my last chance to fish the pier. Soon after, the pier was once again vandalized, the pier was once again set on fire, and this time the fire destroyed the pier. Blackened pilings were all that gave evidence that a pier had even existed on the spot.

Environment. The two-acre Warm Water Park, in San Francisco’s  Central Waterfront area (between China Basin and Candlestick Point) was part of what San Francisco considered its “Blue Greenway,” the southern part of the Bay Water Trail. The park opened in 1976, the same year the small pier was built (56 feet long with a t-shaped end).

Unfortunately, almost from the opening day, the park began to attract the homeless as well as drug users and graffiti “artists.” The park became base camp for several homeless encampments and eventually even a Sunday service was held in the “Homeless Church Bus.” The park’s tables, benches and pier suffered numerous fires.

In 2002 the SF Planning Department’s central Waterfront Neighborhood Plan noted that the park should be improved (duh!). In 2004 the Port installed accessible and unburnable concrete picnic tables and new signage. In 2007 it was reported that the Port’s maintenance department and the San Francisco Police Department were monitoring the park on a daily basis and that the homeless count had gone down from 40 people to one. The semi-buried tires had been removed and the graffiti painted over (once again). New long term plans called  for reestablishing a park and invited meetings with dog owners, skate boarders, and others (including artists and musicians). In 2012 money was allocated for several of the “Blue Greenway” projects. Never mentioned was the inclusion of angling groups in the planning stage nor does there appear to be any plans to rebuild the pier. It’s too bad.

Fish and Fishing. Fishermen who were able to fish from the pier when it was in good condition found the fishing good — although they also kept an eye out for what was happening around them.

The bottom here was mud, the pilings had some growth on them (primarily barnacles), and there was considerable grass (it looked like eel grass) in the main part of the channel leading into the cove.All that was normal for many areas along the bay.

What made the cove special were two items deriving from the adjacent power plant owned by the Mirant Corporation (formerly the Pacific Gas and Electric Company’s Potrero Power Plant). (1) As the name implies, the water here is slightly warmer than water outside the cove. The cove is adjacent to the power plant that takes cold bay water into the plant and then discharges it back, slightly warmed, into the cove. This warmer water would attract fish. (2) Secondly, the water discharged into the cove was often full of fish food that have been drawn in and then spit back out in the plant’s discharge of water.

The result was above-average fishing, especially during those months when striped bass were in the area. A negative aspect was that at low tide the angler was usually faced with (as mentioned) basically a mud flat, an embarrassing shoreline area, and little water with few fish. Nevertheless, the benefits outweighed the drawbacks, especially on windy days. 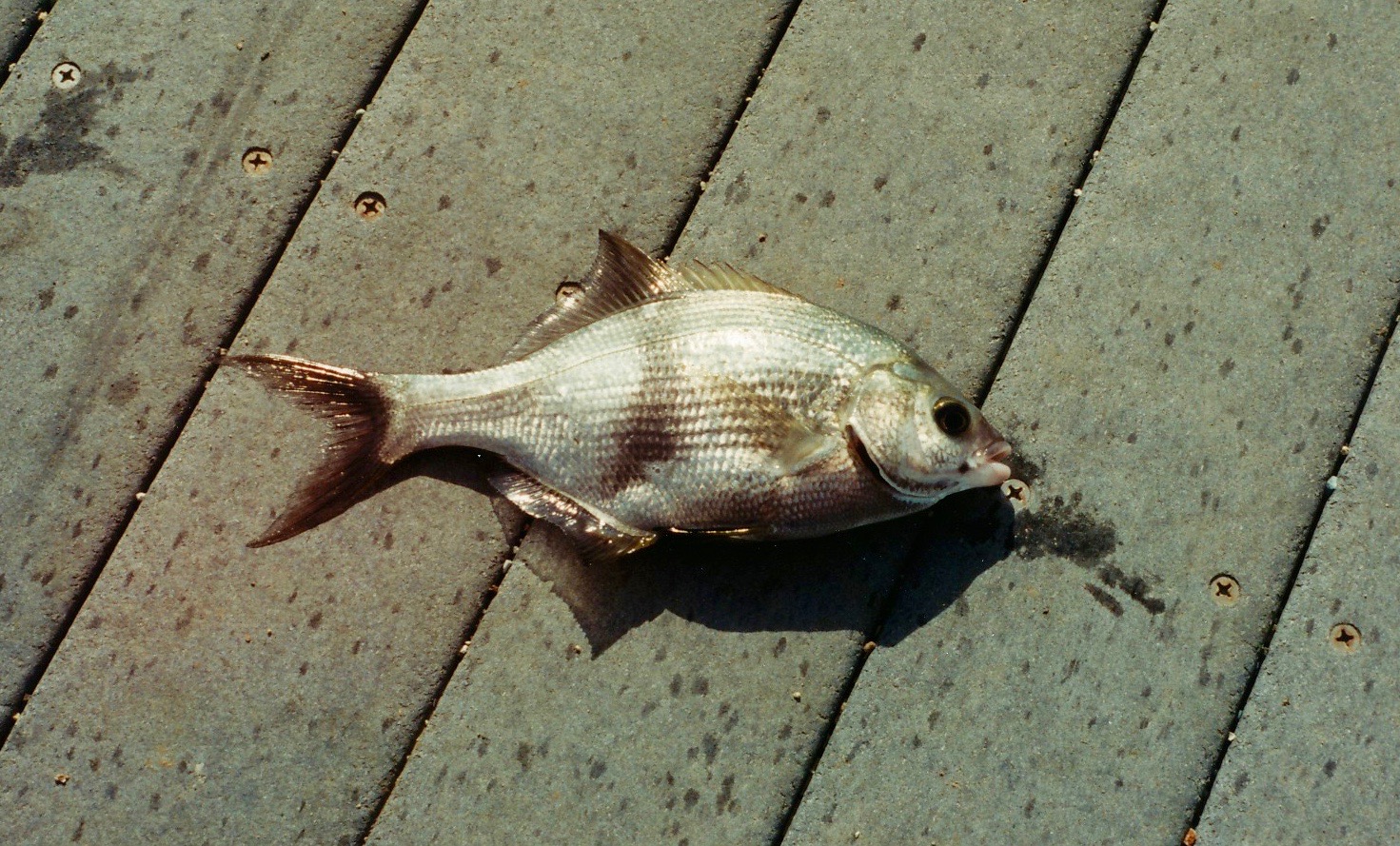 This was also a fairly good spot for perch and flounder in late winter or spring and it was a good spot for sharks and rays during the summer and fall. May though September yielded stripers to anglers using live midshipmen, bullheads or shiners. Since anglers were close to the water many also tried artificial lures with fairly decent results. Sharks and rays could also be caught. Nighttime was of course the best time for sharks and rays but not too many fished the pier at night (unless in a group). There were simply too many strange, wacky and sometimes dangerous characters in the area (and it’s gotten worse over the years).

<*}}}}}}}}}>< — I found the following write-ups for a music festival entertaining not because of the music but the description they give the area.

This ghetto vista on SF’s so-far-neglected shoreline in the Dogpatch neighborhood provides views of the Bay, military dry docks, a broken-down MUNI tram yard, homeless people chilling, and a constant rotation of (quite beautiful) graffiti tags and throw-ups along the fence lines. Just don’t go there at night.

THOUGH I’M SURE it’s been going on forever, it seems like over the past decade there’s been an upsurge of free, local open-air music events all over town. From remote industrial spaces to tucked-away neighborhood parks, every weird, and not-so-weird, band has had an outdoor showcase of some sort. It’s a positive, community-building use of public space in a world of co-opted “dead areas” full of billboards and parking lots… Warm Water Cove is one such treasure, nestled among heaved-up slabs of cracked and crumbling concrete, perched on the edge of the bay with a stellar view of the Port of Oakland across the blue rippling water and bordered by huge mounds of bulldozed gravel and the burned-out shells of heavily graffitied warehouses. It’s the perfect place for extremely loud musical performances. There’s nary a neighbor in earshot to call the gendarmes, save for the occasional non-telephone-equipped vehicular residence.

The kids call it Toxic Beach, and for good reason. Many a scribe has compared the place to what the world will look like after the cataclysmic fall of humankind. Wend your bicycle through the broken glass and shattered pavement and marvel at the contrasts – a glimpse up the skirt of Mother Nature, glorious hints of natural beauty perversely hidden by the rough, uncomfortable artifacts of civilization. Seabirds circle and call above the half-sunk post piles and rocky landfill shoreline. Trees and flowers sprout amid the wood chips and asphalt. It’s tempting to forget the Superfund sites and nuclear waste in the vicinity. But then again – are those muddy puddles from the park’s sprinkler system? Or seepage from a leaking underground storage tank full of some vile cancerous brew?

How To Get There: The pier was located at the end of 24th Street. From Highway 101 take Third Street to 23rd Street, turn right on Illinois and proceed a short distance to 24th Street.