Sometimes it’s hard to fight for a pier when you hear ongoing, almost non-stop stories of people (anglers and non-anglers alike) vandalizing and committing a variety of crimes at the pier. Eventually the poor behavior and crimes seen at this pier helped define the pier itself and would lead to an early closure of the pier.

This pier, like the San Mateo Pier to the north, was a reincarnation of an old bridge. In this case, the older bridge was the original Dumbarton Bridge, an iconic bridge that opened in 1927 but was replaced by a new, larger Dumbarton Bridge in 1984.

It seemed a no brainer, converting the old bridge into fishing piers and it was — for a period of time. Both piers provided easily accessible angling opportunities and were heavily used. But while the Dumbarton Pier remains open, the Ravenswood Pier was closed for an indefinite period of time in 1994, less than a decade after opening, and now is gone forever.

Repeated vandalism and fires, together with several incidents of violence (including a possible murder) convinced local authorities to close the popular pier. Once again a few knuckleheads, and in this case perhaps more than a few, ruined it for everyone else.

What was it like when open? Although the pier was nearly 2,000 feet long, the majority of the pier was over shallow water. There was some growth around both the pilings and adjacent bridge supports, and there are some rocks along the shoreline. However, for the most part, anglers were fishing over a typical bay mud bottom and concentrating on striped bass, sharks and rays. Fishing tended to be hit or miss here and it was a lucky fisherman who was fishing when schools of fish showed up.

During winter and spring, schools of pileperch, black seaperch, rubberlip seaperch, and even redtail surfperch would sometimes show up, as well as starry flounder.

Late winter and spring was usually the best time for sturgeon, and it could be a fairly decent pier for sturgeon although it rarely was as good as the San Mateo Pier to the north. Pesky staghorn sculpin, sharks, and bat rays were seen year round.

Wise fishermen geared tackle and bait to the time of year they were fishing. During the winter and spring they tried the inshore area for perch and jacksmelt. Pile worms on the bottom yielded perch; pile worms fished under a float near the top yielded jacksmelt. During the same time, while fishing worms, grass shrimp or cut bait on the bottom, a lucky angler might be rewarded with a starry flounder. Heavier gear baited with grass shrimp, ghost shrimp or mud shrimp was used for the sturgeon.

Summer and fall was the best time for sharks and bat rays and almost any bait on the bottom might yield a fish. Optimum baits for the sharks remained cut bait, i.e., oily sardines or bloody mackerel, but small live fish (shinerperch, midshipmen, staghorn sculpin or mudsuckers) sometimes yielded the bigger sharks. Squid was generally the best bait for the bat rays. Most of the sharks landed were brown smoothhound sharks but an occasional and usually larger leopard shark or 7-gill shark would bring a few thrills.

Striped bass also frequent these waters May through October with September and October being the prime months. Live bait such as shinerperch or staghorn sculpin caught most of the fish but many stripers were also landed on cut bait and a few were landed on lures. 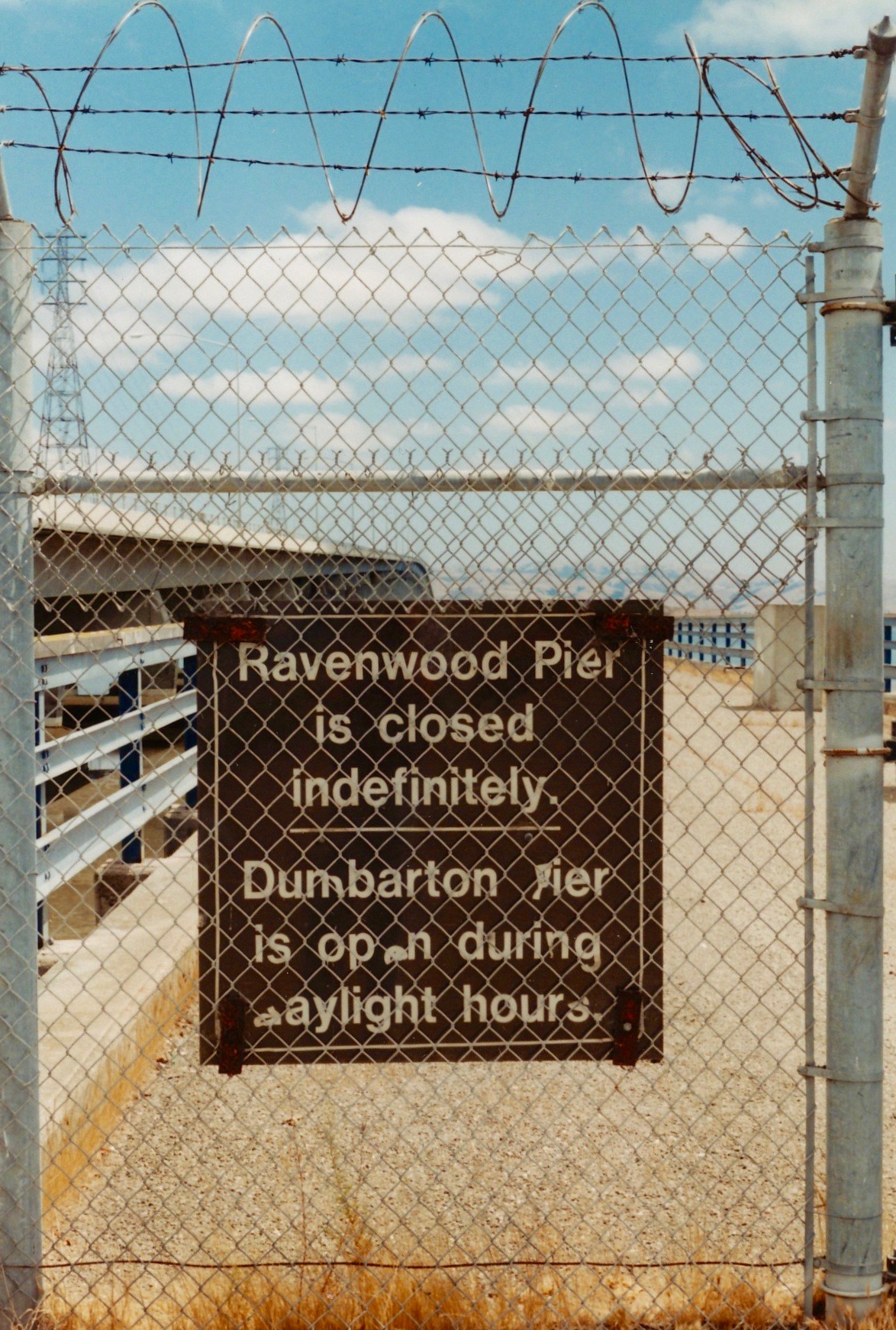 History Note. The name Ravenswood is adopted from that of the town that was established in this area in 1853. Impetus for the original development came from the need for a good site on the bay from which to ship lumber and soon a costly and extensive wharf was built out into the bay’s deeper waters. Lots were sold, houses were erected, and a store was opened.

Unfortunately for those who had bought houses or lots other sites proved more attractive as ports for shipping. When the Central Pacific Railroad Company failed to choose this site for a bridge across the bay, the town was abandoned. However, Cooley’s Landing (named after new owner L.P. Cooley), and located on the site of the old wharf, continued in use for many years.

If you look south of today’s bridge you will see the old Southern Pacific Dumbarton Cutoff Railroad Trestle Bridge. You will also see the Hetch Hetchy aqueduct that brings fresh water from the Sierras to San Francisco.

What you will no longer see looking south of the bridge is the Ravenswood Pier. In 2011-2012 the pier was used as a base while work took place to retrofit the Dumbarton Bridge. After completion of the retrofit the pier was removed.

History Note No. 2. The original “Dumbarton Bridge” was the Dumbarton Cutoff Railroad Trestle Bridge. The train bridge was constructed between 1908 and 1909 at the shallow part of the bay between Dumbarton Point and the Palo Alto area. It was the first bridge across the bay and carried six to eight freight trains daily between 1910 and 1982.

However, the real “Dumbarton Bridge,” the one that served as the precursor to today’s Dumbarton Bridge—and this pier—was an iconic bridge that opened on January 15, 1927. It was the first bridge to allow automobiles to cross San Francisco Bay and was, until 1929 when the San Mateo Bridge opened, the longest highway bridge in the world. Unfortunately, the bridge was only two lanes wide, was built close to the water, and was a drawbridge. As with most drawbridges, long backups in traffic could occur when a boat decided to travel under the bridge. It was also a toll bridge with users paying the grand sum 40¢ each way.

Built by private funds (the Dumbarton Bridge Company), the bridge was partially rebuilt in the 1940s to deal with increased traffic. In 1951 the state bought the bridge for $2.26 million dollars.

By the ‘60s, it was obvious that the old bridge needing either an expansion or needed to be rebuilt as a larger bridge. The latter option proved more feasible and in the ‘70s the state began planning a new bridge.

In December 1984 a new Dumbarton Bridge opened (at a cost of 74 million dollars), one that was four lanes wide and high off the water. The bottlenecks seemed at an end. Users now paid a toll 75¢ to help defray the costs of the bridge.

In 1989, as a result of the temporary closing of the San Francisco—Oakland Bay Bridge (due to the Loma Prieta earthquake), the bridge was restriped to accommodate six lanes of traffic. Unfortunately the widening of the approaches wasn’t completed until July 2003 (at a cost of $200 million); one result was new traffic congestion, especially during rush hours. The toll, westbound only, as of 2010 was $5.