Species: Tetronarce californica; (Ayres, 1855); from the Greek word torpedo (for numbness—from the electric shock) and californica (for California, where the first specimens were taken). Formerly Torpedo californica.

Identification: An oval disk that is thick and flabby; the tail is short, stocky, with two dorsal fins and a large symmetrical caudal fin. No spines or prickles. Eyes small and round; mouth moderate in size with 4 or 5 rows of teeth in each jaw. Coloring is blue-black to drak gray above; white to slate gray below; often with black spotting. 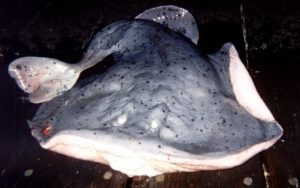 Size: Reported to 55.1 inches in length and 90 pounds. Typical size at piers is from two and a half to three and a half feet.

Habitat:  Generally in shallow coastal waters (surf zone) but reported to a depth of 1,079 feet. During the day they will often partially bury themselves in sand before ambushing unsuspecting victims that come a little too close. They capture their prey (fish, invertebrates, cephalopods) by suddenly lunging their heads upwards and simultaneously delivering an electric shock (of up to 45 volts). At night they like to swim mid-level and attack fish that have settled near the bottom in a quiescent state. It’s reported that when “a prey fish enters range, the ray lunges forward and folds the anterior and lateral margins of its pectoral fins over it. It then envelops the prey further by making short kicks with its tail, sometimes performing somersaults and/or barrel rolls, while incapacitating it with electric shocks. .The stunned fish is then passed to the weak but flexible mouth with undulations of the disc, and swallowed head-first.” When vision is limited (night or turbid water) they mayfind their prey by picking up electrical cues with their ampullae of Lorenzini. 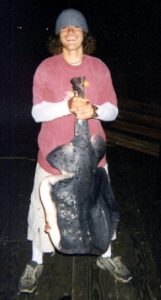 Bait and Tackle: Since this is one of the larger fish pier anglers will encounter, you should use at least medium saltwater tackle—twenty pound test line and size 2 to 4/0 hooks. Most electric rays have been taken on cut bait such as mackerel and sardines or on squid.

Food Value: Apparently they are quite tasty (at least according to the French who savor electric rays). 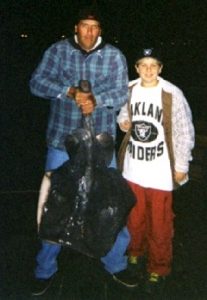 Comments: Milton Love reports that they “hover over the potential tidbits, then stun them with a jolt that can reach at least 45 volts.” These rays are generally a surprise catch on a pier and often the angler is shocked (literally) by the catch. If you must pick them up, do so by their tails; the shocks are produced in organs located in the disk on each side of the ray.