These news items paled in comparison to what took place in 1939. In September of that year the pier (including the T-shaped end) was virtually destroyed by a Mexican chubasco (hurricane) that hit Southern California. Soon after on October 23 a special meeting of the city council was held regarding the rebuilding and financing of both the Newport and Balboa piers. A petition representing 643 signatures was given to the board. On December 4 voters went to the ballot booth to vote on a bond issue allowing $130,000 for the construction of the two piers. The next day newspapers announced the results.

$130,000 Pier Bonds Voted By Harbor Area On Tuesday—Newport Beach, Dec. 6—A bond issue of $130,000 was voted Tuesday by harbor area residents for the reconstruction of the Newport Beach and Balboa piers destroyed by the forceful storm of last September. Ballots totaled 1,707 with 1,198 yes and 509 no votes cast. The two-thirds majority necessary for the success of the bond issue was attained by but 60 votes. Twenty-three absentee ballots are yet to be received… Officials will begin immediately preparation for advertising of the bonds and for bids for the work, which may run concurrently. It is expected construction will begin in late February or early March with the piers ready for the use by the summer season. Preliminary plans for the Balboa project show a structure 920 feet long to start at a point 233 feet southerly of the Ocean Front walk. The end of the pier, which will cost approximately $64,700 would extend to a depth of 30 feet of water at low tide. Estimated cost of the Newport wharf is $64,200 with $1,100 added by the city council for the construction of a bait house. Preliminary plans cover a pier, which will be 1,083 feet in length extending to 30 feet of water at low tide.

In addition, both piers would also see improvements to the approaches to the piers including upgraded street and curbs, benches, additional lights, and additional palm trees. The additional work brought the contract price to $124,370, an increase over the originally contract of $124,370 but still under the original $130,000 bond.

Work was soon under way and by June the papers were ready to announce the dedication of the Balboa Pier—June 23, 1940. The papers said it would be a “gigantic” celebration with a variety of events including a fishing contest and “thrilling” kayak races.

“As thousands of visitors jammed the oceanfront, beautiful girls representing the 20 cities aided in dedicating a “Court of Friendship” which fronts the new structure. Twenty palm trees were placed around the court…as more trees are added to the court, additional cities will be honored.”

“Opening the program was a marine fashion show, in which a number of Balboa’s most beautiful girls exhibited the latest styles for beach, yachting and general sports wear.”

“Another attraction which brought scores of visitors here was an amateur photography contest, with camera experts offering a large number of prizes.”

It sounded like a fun time but I am not too sure today’s reporters would report things in quite the same manner.

Although the Balboa Pier never experienced problems as severe as those seen at the Newport Pier, it falls under the same city jurisdiction and unfortunately suffered the same fate as its sister pier when hours were cut back by the city in 1996 (a story outlined in more depth in the article on Newport Pier).

Council Scheduled to Vote on Plan to Limit Pier Hours

A proposal to close the city’s Newport and Balboa piers from midnight to 5 a.m. is scheduled for a vote at Monday’s City Council meeting.

Murphy’s office is also recommending the installation of video cameras to monitor illegal activity, working closely with the piers’ concession owners to ensure maintenance and stepping up police enforcement.

For two years, merchants and homeowners in the area have been at odds with Newport Pier anglers over how to keep people from cleaning fish on the benches and casting their lines overhead.

“I feel they are trying to railroad the poor guys out of the city,” said Joe Imbriano, a fishing enthusiast and activist.

Others, such as Ted Post, an Orange resident who has been fishing in Newport Beach for 45 years, said the recommendations are sound. “Everything was fine for 43 years until the policing was reduced,” he said. “We’ve been asking to bring it back to normal. This will help keep the drunks off the pier at night.”

Balboa Pier Will Now Be Closed at Midnight

Beginning today, the city will close Balboa Pier from midnight to 5 a.m., imposing the same curfew set in June for Newport Pier.

The city’s goal is to curb crime and reduce litter, City Manager Kevin J. Murphy said in a written statement.

Though adopted in February, the curfew had not been enforced at Balboa Pier because signs and a gate had not been installed. Now that is done, officials said.

When the Newport Pier curfew took effect, it drew a mixed response from anglers. But city officials say the new policy has yielded positive results.

Since the Newport Pier closure, Murphy said, “there has been a significant drop in vandalism.” The city expects the same results at Balboa Pier, he said.

Anglers had feared that they would be banished from two of the best fishing spots in the state during prime hours.

A group of fishing enthusiasts organized a campaign to urge other anglers to clean up after themselves to thwart city action but were unsuccessful.

City officials sided with pier-area merchants and residents, who complained that fish bait and remains left behind by anglers were unsightly and discouraged tourism.

Officials had also said there was a growing problem with graffiti, other kinds of vandalism and public drunkenness.

After a several months of study by the city staff, policy-makers decided in February to reduce fishing hours.

City crews now clean up the Newport Beach piers while they are closed during the early morning hours, a policy similar to that in San Clemente, where the pier is closed from midnight to 4 a.m.

As at all piers, occasional damage seems to almost be a byproduct of winter storm (especially the warm-water El Niño storms). Same here as seen in 1998 when one corner partially collapsed following damage to a piling. The damage was quickly fixed but given the nearly 60 years since the 1939 construction, the city decided to take a look at both the Balboa and Newport piers. The result was fairly major repairs in 2001.

Shoring Up Two Landmarks Along the O.C. Coastline

Beaches: To ensure the stability of Newport and Balboa piers for 20 years, $3 million will be used to replace decks, pilings

Newport Beach’s two landmark piers are about to get their most extensive face-lifts in 60 years, as workers replace both decks in hopes of protecting the structures against pounding waves that proved too tough for some neighboring piers.

The Newport and Balboa piers have been battered by decades of heavy surf, to the point that engineers said both structures could suffer fatal blows in the event of a major storm. While the piers are still safe for public use, officials said immediate repairs are needed to protect the structures for the next 20 years.

The city will spend nearly $3 million to replace the boardwalks of each pier, painstakingly removing battered concrete and weathered wood. Some eroded piling also will be replaced.

The piers are “suffering big time,” said Lloyd Dalton, design engineer for the city who is supervising the work. “With all the deterioration and pounding from the ocean they have taken over the years, they’re not nearly as strong as they were in 1940.”

Waves are not the only thing threatening the piers. Ship worms and limnoria, wood-eating insects, have found their way into the timber. Trucks driving across the boardwalk to deliver food and supplies to restaurants at the piers’ ends are also undermining the wood-and-concrete supports.

Both piers were built in 1940. The current Newport Pier replaced the famed McFadden’s Wharf, a center of pre-World War II commerce that was bisected by trolley-car tracks. The area around the pier was a top fishing spot, and the trolley brought produce, food and other goods.

The wharf was destroyed on Sept. 24, 1939, when a tropical storm with 60-mph winds and 30-foot waves smashed through.

The old Balboa Pier—built in 1906 to lure residents to the then-deserted spot–was also destroyed by the same storm.

They’ve stood up to much pounding since 1940, faring better than others along the coast.

The Seal Beach Pier was severely damaged during the 1983 El Nino storms and had to be rebuilt. A 1998 storm destabilized the Aliso Pier in South Laguna Beach. County officials demolished the pier but said there wasn’t enough money to rebuild it.

“Typically, when these piers are damaged, the wave heights exceed the design waves and they start hitting the main structure of the pier as opposed to the piles,” said McCarthy, an engineer with Moffatt & Nichol Engineers, a national firm that specializes in waterfront structures.

Both piers have wood superstructures, which support cement decks. The decks are cracking and will be pulled out. Workers will also replace the eroded wood bracing and metal bolts that connect the decks to the structures.

The city will use its portion of the settlement from the 1990 American Trader oil spill to pay for the repairs.

When the work is complete, the city will take steps to protect from further damage. Trucks heavier than 3.8 tons will be prohibited from using the piers to deliver goods to the restaurants. Currently, trucks up to 5 tons are allowed to use the deck for deliveries.

Balboa reopened in the spring of 2002 with new railings, a new concrete deck, reinforced pilings, and new restrooms near the front of the pier.

Unexpected damage from a different source occurred in 2013 when a 55-foot-long private boat lost power and drifted into the pier’s piling. The pier was closed for a short period of time but reopened after the city engineers declared the pier was structurally safe.

Today the pier seems in great shape—and it looks beautiful. 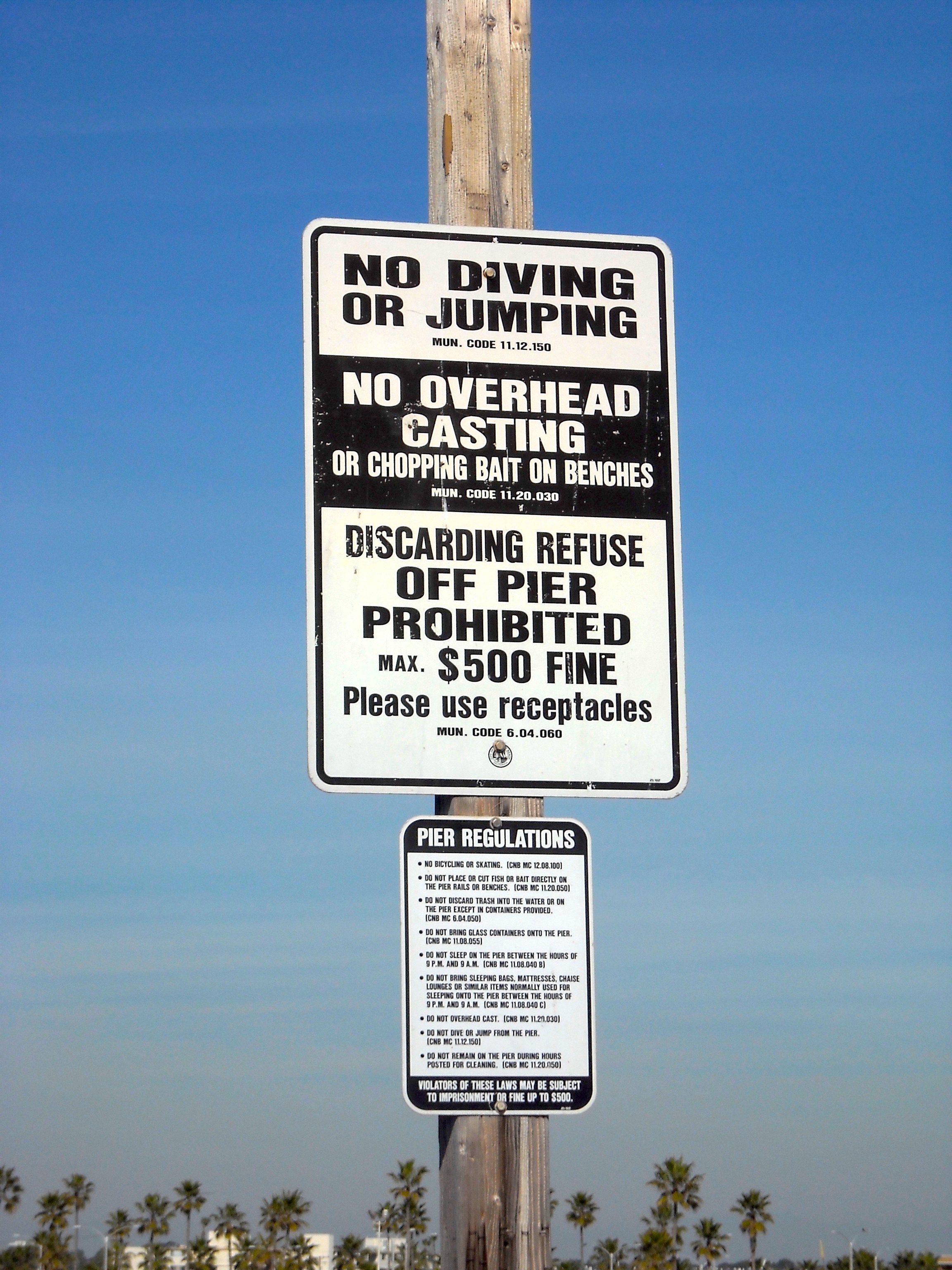 Hours: Open from 5 A.M. till midnight.

Facilities: Restrooms are located near the entrance to the pier. There are lights, some benches, and fish-cleaning stations on the pier. There’s a Ruby’s Diner restaurant at the end with its candy-striper waitresses and ‘50s decor. Ruby’s restaurant sits out at the end of the pier. There is currently no bait and tackle facilities. Parking spaces can be nearly impossible to find so I recommend the parking lot adjacent to the pier even though the cost is $1.50 an hour (with a maximum of $7). If the kids are seeking entertainment they can find it nearby at the Balboa Fun Zone near the Pavilion. They’ll find a small Ferris Wheel and some arcade games.