Miscellaneous Bottom fish — Kingfish (white croaker) are the main fish landed and they are landed year round. Best rigging is a high/low rigging with size 6-4 hooks. Best bait is a small strip of piece of anchovy or mackerel, a piece of pile worm, or a strip of squid. The kingfish will often hit on the drop. Cast out, let the bait sink to the bottom, and immediately tighten the line. Often you will feel a hit as soon as the line in taunt. Strike and if the strike is missed start to slowly retrieve the line. The kingfish will often follow the bait all the way to the pier and, in fact, will often hit the bait as it begins the upward trajectory to the pier. They aren’t much in the way of “fighter class” fish but provide some action when the more sporting fish are missing in action. 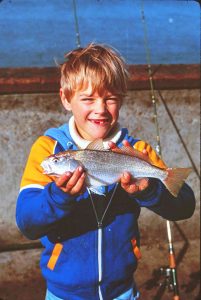 My son Mike with a kingfish (white croaker)

Everything said on the kingfish can be applied to Pacific tomcod with the exception of numbers. They are a schooling species and if the school decides to visit the pier’s waters they will be caught. But when will they visit the pier? It’s hard to say since I have caught them sporadically throughout the year with no discernible pattern.

Staghorn sculpin are another year round species and can be caught in almost the same fashion as the kingfish (although they just as soon will hit a bait resting peacefully on the bottom). If they are around, they will find your bait. Some people will switch to somewhat bigger bait when they are present but that doesn’t seem to stop them, I’ve seen the small sculpin grab baits that would barely fit in their mouths.

As for the rocky-shore species—lingcod, cabezon, greenling and rockfish; all will be caught around the pilings and the best rigging appears to be a high/low rig outfitted with size 4 or 2 hooks. Bait up with pile worms, fresh mussels, or pieces of shrimp, and fish close to the pilings on the bottom. Be careful! You must hold your rod at all times and “feel” where the bait is sitting (or being swept). You will probably still lose a rig or two but one of these nice fish is worth the effort if you can catch a legal-size fish.

Mid-water and Top-water Schooling Species — Jacksmelt can show up almost any month and since they are usually in large schools if you catch one you will probably catch more. Most will be caught on bait rigs but I prefer to use my two-hook high/low rigging. They are a hard fighting fish and one or two on a line are much more fin to catch than a half dozen fighting almost against one another. 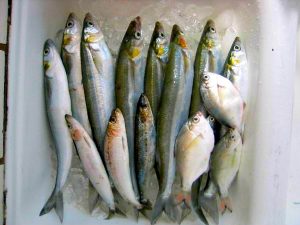 Jacksmelt are a mid-water species, often 4-6 feet below the surface, so anglers using Sabiki-type bait rigs will employ a variety of devices to keep their baits at near the surface. Some use balloons (a bad idea for the environment), some use big bobbers, some use a piece of Styrofoam and all will work. Generally the big smelt (to around 14-15 inches) prefer a piece of pile worm for bait although at times they will hit nothing but pieces of shrimp, strips of squid, or pieces of anchovy/mackerel. They can be finicky at times; at other times it is wide open anything goes action.

Some years may also see Pacific mackerel and/or Spanish mackerel (mackerel jack). If they are present the same rigs and same baits will work as for jacksmelt. One thing to note is that a Sabiki rig filled with a whirling dervish mix of four-six mackerel often means a complete mess and a loss of the tangled leader. It’s one reason I stick to my two-hook high/low rig, which also seems more sporting. Plus, why do you need to catch a half dozen mackerel at a time? Are you really going to eat that bucket full of fish?

Pacific sardines are a fish that showed increasing numbers in the ‘90s and diminishing numbers after about 2008. However, they seem to be increasing again and if/when they show at the pier they can be caught in huge numbers, 4-6 at a time, with unbaited bait rigs. Simply cast out the Sabiki or Lucky Lura utilizing a torpedo sinker heavy enough to cast through the wind, let the rig sink midway to the bottom and begin a retrieve. Some times a fast retrieve is needed, sometimes a herky-jerky retrieve is better (it seems to vary) but once you get the technique you should catch fish. They are good eating and they make great bait.

If the sardines show up during the striper season (spring to fall), knowledgeable anglers will put a live sardine on a trolley line rig near the surfline. Oftentimes a striper will be the result.

Everything said about the sardine can be applied to Pacific herring although the herring will generally make a wintertime visit if they decide to make a stop at Pacifica on their way to San Francisco Bay. As such they aren’t utilized for live bait unless an angler is really hopeful. But, they still are good eating and good frozen bait.

Northern anchovy also make great bait and sometimes seem to cover the pier’s waters. When present, bait rigs can be employed but use a smaller-size hook than that used for the larger fish. Typically a steady retrieve is all that is needed to hook the small bait fish. Pizza anyone?

Do be cautious. One trip saw me jigging with a Lucky Lura leader for some live bait (to use on my heavier salmon rig). Unfortunately, the water was thick with smolts (baby salmon) about the size of herring. After hooking and releasing about a dozen of the small fish, I decided to call it quits with the leader. Unfortunately not all the anglers that day looked at things the same way and too many of the small fish were kept and killed. These small, illegal fish need to be left alone by anglers. Enough of these fish will be eaten by other predators before reaching adult size so don’t complicate their lives any more than necessary. 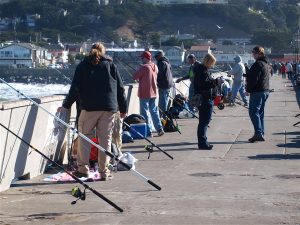 Flatfish—Four main flatfish are caught and each require different rigging.

Two sanddab species show at the pier, speckled sanddab and Pacific sanddab. The speckled are a small species too small to keep as food and never, at least to my satisfaction, proven to be decent bait. The speckled sanddab are an incidental fish caught year round and showing up unexpectedly whenever a small hook baited with food is left on the ocean floor.

Pacific sanddab are larger (although not big) and provide good table fare if enough are caught — and that’s rarely a problem. The fish are a schooling species and when present are caught in large numbers. Use a two-hook high/low with size 6 or 4 hooks and you’ll probably get two fish. Use a six-hook bait rig and you might get six fish.

Cast out the line, let it sit on the bottom until you start to feel the nibblings of the ‘dabs and then begin a slow retrieve. Whatever hooks are still empty may be grabbed by a fish. Baits vary but I’ve had the best results using pile worms. But when they are hungry they will hit almost anything—pieces of anchovy, small pieces of shrimp, or small strips of squid.

Unfortunately they do not make a showing ever year and when they do show they usually only make a short December-January appearance. In addition, my records show that almost all of my sanddab catch at the pier was made early in the morning, right at daybreak and all the fish were caught out at the end. Anglers fishing mid-pier caught few if any sanddab and those coming later in the day never saw a single sanddab.

Sand sole are an interesting mid-sized flatfish that is both attractive and good eating. Luckily for Pacifica anglers, the pier is probably the best in the state for the sole. They are most commonly caught in the mid-pier area and can be encountered in almost any month of the year (although summertime, especially June and July, is the peak season for the fish). The largest I have caught at the pier was a 19 3/4-inch sand sole caught during my first visit to the pier in September 1975.

As to rigging and bait, I’ve caught them on both high/low rigging’s and on a sliding live bait leader. Best baits include pile worms, cut bait—anchovy, sardine or even squid, and shrimp. Unfortunately many anglers do not recognize sand sole for what they are, they think they are halibut, and release the fish as under-sized. Know your fish!

Fishing the same area may also attract another mid-sized flatfish — starry flounder. They’ve been reported to 12 pounds at the pier although the largest I’ve caught was a July ’78 fish measuring 17 3/4-inches.

Best luck for these is with (a) one of the traditional Bay Area sliding live bait leaders (plastic that attaches to a sinker while the line goes through the plastic) or (b) a Carolina-type live bait leader (line through a hollow egg sinker before attachment to a swivel and then a 2-3 foot leader. attached to. Live bait, a small smelt or small perch works well as does pile worm and cut bait—anchovy, sardine, squid, etc.

California halibut are the prize flatfish at the pier. They’re primarily caught from May until September and fish to 32 pounds have been landed. They’re found mid-pier out to the end (although it’s hard to fish for them at the end if a salmon run is on).

Almost all halibut are caught on live bait — anchovies, small smelt, small perch, or sardines, and some type of live bait leader is used. The plastic Bay Area variety works as well as the Carolina rigging although some people try the same sliding “trolley” leader used for salmon. Although artificial lures are one of the most efficient ways to land halibut in SoCal, and “trolling the pier” in the depressions between the pilings might produce fish, the sheer number of anglers, combined with the vicious tides and current sometimes found at the pier, make artificial lures an “iffy” proposition.

If fishing for the halibut make sure to use at least 20-pound test line and be sure to have a hoop net to bring the halibut up to the pier. 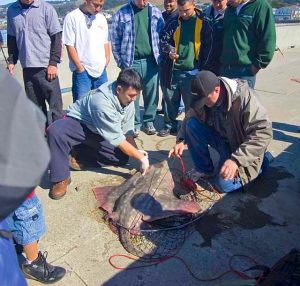 Sharks and rays—As mentioned, the pier is not noted for sharks or rays. Nevertheless some sharks are caught, mostly leopard sharks or brown smoothhounds. In addition, a few “shark anglers” still give thresher sharks a try if the pier isn’t too crowded.

Leopards and smoothhounds are common from almost the tideline to the end but most are hooked in the mid-pier area. They can be hooked on high/low rigs as well as Carolina-type rigs. If using a Carolina rig try baiting up with a small perch—walleyes, silvers and spotfins, or sardines (if they are running).  For high/low rigging’s use cut bait—anchovies, sardines, mackerel or squid.

Thresher sharks are the favorite of anglers and threshers to 10-feet in length have been recorded (although much of that was the long tail). For those seeking out the large sharks the equipment is usually a fairly heavy 9-12 foot rod, a large reel equipped with 50-100 pound line, and a sliding live bait leader. A 5-7 ounce sinker is cast out as far as possible and then the sliding leader is snapped onto the line before sliding the leader down the line. The leader is fairly long with a float of some type (big bobber or Styrofoam) located mid-way down the leader to keep the rig near the surface. Another 6-8 feet of leader is under the float terminating in a large hook and lively bait. Treble hooks are favored by many anglers since threshers will often swat the bait with its tail before biting it bit some anglers simply use a large hook.