The question of what is the best pier in the state is one that I have been asked fairly frequently over the years. Given that the answer depends on a number of factors (including the personal affection which anglers have for their own piers), I always hesitate to give an answer. However, when the first edition of Pier Fishing In California was published (in 1992) I named this pier the number one pier in the state. Why? The answer was that no other pier in the state yielded the number of fish, nor the quality of fish, that was seen at the Pacifica Pier (aka the Rev. Herschel Harkins Memorial Pier).

My answer though was nuanced. There were the headlines and there were my own personal experiences, records and opinions. I had begun to fish the pier starting in September 1975 and quickly discovered that it yielded a high number of fish and a nice variety of fish. By the late 1970s I had already judged it one of the best piers in the state even though I had rarely seen a salmon taken from the pier. 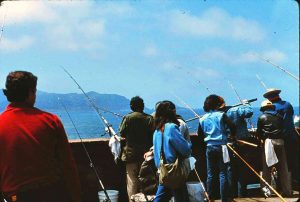 But the salmon did show up and the number of salmon taken, together with the number of fishermen responding to the salmon, is what made the pier famous (or infamous depending upon your viewpoint).

The salmon, mostly king salmon, began to show up in the early ‘80s and reached a crescendo-shattering peak in 1995. When the salmon were running the pier was filled with anglers hell bent on catching one of the good-sized, good fighting, and good eating fish. In ‘95 the anglers would be joined by reporters and cameramen sent to film the frenzied scene. Almost all of the Bay Area television stations, and newspapers in and outside the state, had stories about the salmon being caught at the Pacifica Pier. Accompanying pictures showed large salmon being hauled onto the pier and anglers lined up elbow-to-elbow along the railing. In addition, some less-than-accurate articles appeared in fishing magazines. 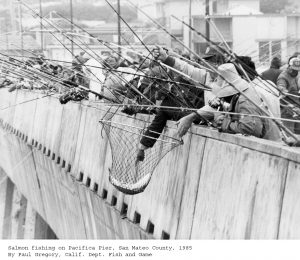 Photo courtesy of the California Department of Fish and Game

A natural result of all this publicity was that more and more anglers flocked to the pier and it became even more crowded (especially in the coveted spot at the end—“Little Manila”). The crowding caused new problems including tangled lines, shortened tempers, occasional arguments, and a general thrashing of the pier. Although the pier had become famous for the salmon, many viewed the pier as a place to be avoided because of the crowds and the other problems experienced at the pier (one critic noting “garbage everywhere” and the “sickening smell of urine along the further reaches and L of the pier”). Most agreed the pier was a zoo during the prime salmon season and many saw little piscatorial pleasure in such surroundings. Eventually one angler gave it a new name — Pathetica Pier.

There were alternative views. One angler said, “All the negative aspects seem insignificant when anglers start to pull up salmon and stripers.” Another PFIC regular, thecrw, said, “I pose this rhetorical question: Is it Fanatical Fishing or a Hard Earned Fish? At first glance, the crowded pier and tangle lines may put many of us off from fishing for salmon at Pacifica. But, like banging around in a Mosh Pit, it could be fun for a select few. Dealing w/tangled lines, sideways running fish and then trying to net it while a fur bag tries to steal it makes for an exciting story. I haven’t participated in this mayhem, but hope to, just to say I was there.” The arguments raged on—as did the publicity.

Unfortunately, the picture presented by the media was a little misleading, at least if you are trying to tell the full story of a pier. But that was never the intent. If you’re going to make the evening news you need an exciting story — you need something to grab the viewer’s attention! A crowded pier filled with anglers jostling for space (or lamenting a lack of space), animated fishermen fighting fish, onlookers yelling advice in a half dozen languages, bloody trophy fish being hauled up to the pier, and crowds gawking in appreciation and jealousy presented that excitement. There was always an eager angler willing to show his or her fish and to present his or her story. Coming up on the 11 o’clock news—big crowds and big fish at Pacifica! It definitely was an exciting time at the pier. 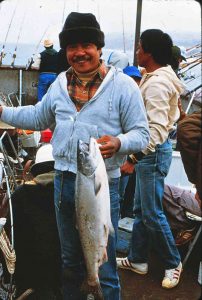 Lost amidst the excitement were the quiet times when the crowds were gone but fishing remained good. But pictures of a nearly empty pier are not going to grab attention—or help the ratings.

But it was those quiet times that had early on convinced me that the pier was one of the best in the state. My visits during the pre-salmon, less crowded years, produced an average of more than 23.2 fish per trip and 6.33 fish per hour, both among the best averages for me on any pier in California (at that time).

In addition, I caught fish year round, not just during the main June-August salmon months. In fact, one of the best times to fish the pier was in the winter. As example, 1978 saw me visit the pier five times during February and March. I totaled 198 fish in those five trips. Included in the mix were 14 large redtail surfperch, 12 large barred surfperch, 3 large calico surfperch, 43 walleye surfperch, 106 silver surfperch, a 38-inch leopard shark, and a plethora of other species including Pacific tomcod and jacksmelt.

Given those numbers, what was most interesting was that the pier was virtually deserted, almost empty of people because fishing was “so slow.” Wintertime trips would also often yield Pacific sanddab; one chilly, early-morning trip in January yielded 35 sanddab out of a 60-fish catch.

This second story, not of salmon or crowds, but of excellent fishing for small and medium-sized pan fish together with moderate crowds, was, in my mind, at least as important as the first. But a news story that is balanced, thorough, or devoid of sensationalism was as rare in those days as it is today.

Unfortunately those early results, both for the smaller pan fish and the larger salmon, are rarely duplicated today. There are still occasional runs of smaller fish—surfperch, jacksmelt or baitfish such as sardines, and occasional runs of salmon, but day in and day out it’s become a very average pier. In fact, the number one activity at the pier, at least during the months of November-June is now the pursuit of crabs, namely Dungeness crabs. 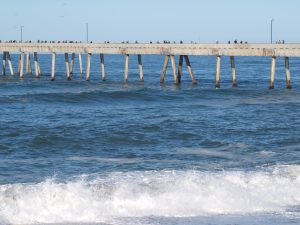 Environment. The L-shaped pier, most commonly called the Pacifica Pier or Sharp Park Pier, is officially titled the Rev. Herschell Harkins Memorial Pier. But, it also at times has earned the somewhat derisive nickname “Elbow-to-Elbow Pier.” It’s a sobriquet richly earned during the salmon runs when the salmon are fighting over the bait and anglers are fighting over space at the railings.

The pier is 1,140-foot-long, 19-1/2 feet wide for most of its length, and 138 feet wide at the end. It’s an all-concrete pier that fronts directly on Sharp Park State Beach and both the beach and pier can see strong winds and huge, huge punishing waves.

The bottom around the pier is primarily sand while the hexagonal pilings are heavily encrusted with invertebrates—California mussels, stalked barnacles, and ochre sea stars. A mélange, which, in turn, is home to small crabs, shrimp and other fish attracting critters. The sand is home to mainly sandy-shore species while the pilings rarely fail to attract fish looking for food.

Looking north you see a sandy shoreline (incorporating several different beaches) that runs for miles. The beaches were once famous for striped bass. Western striped bass anglers would come, year after year, to confront some of the largest stripers in America. Unfortunately, the glory years seem, for the most part, a thing of the past. Although there are still some exceptional seasons (like 1995) most years see far fewer fish, especially the large 30+ pound fish once taken on a regular basis. Nevertheless, regulars with the proper knowledge and technique still rack up some pretty impressive fish. 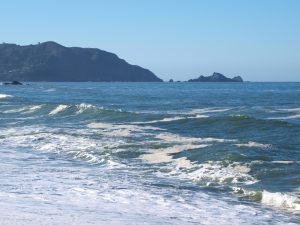 Looking southward you’ll spot Mori Point, a great fishing spot on its own, and Rockaway Beach. A little further down the coast sees San Pedro Beach and picturesque San Pedro Point, another fishing spot of note.

The wind can often make the pier uncomfortable, while fog and drippy dew can be a constant companion during the summer months. Pier-shaking waves, that sometimes break over the pier and drench the pier, can lead to closures. But sometimes the sun makes a visit and the coastline presents itself in all its glory. When the whales, dolphins and seabirds make an appearance, the fish cooperate, and the pier isn’t too crowded, you can almost imagine you’re in paradise. 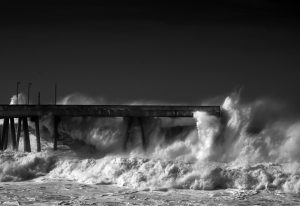 Perch—As an avid perch fisherman, one who has sometimes been called “The Perch Master,” they of course have a special place in my heart. Luckily, I always considered the pier’s perch fishery to not only be among the best in the state but also unique. It is one of the few places where an angler can see an overlap in California’s three “big” surfperch species: barred surfperch from the south, the calico surfperch of central California, and the redtail surfperch of northern waters. Many times I have had the pleasure of hitting a “trifecta” on these fish, the only pier where I have seen this happen. Surprisingly, the redtail surfperch lead the list of those fish followed by barred and calico surfperch.

The smaller surfperch though were always the bread and butter fish with very high numbers of silver and walleye surfperch followed by high numbers of spotfin surfperch. Shinerperch were also numerous but virtually every California perch species was seen—pileperch, whiteperch, sharpnose perch, blackperch striped perch, rainbow perch and even a few rubberlip perch. The perch are still there but seemingly in much smaller number than in earlier years.

Miscellaneous Bottom Fish — Several small, bottom-dwelling species are found in the waters out from the pier. By far, the number one fish numerically is kingfish (white croaker), a fish that is much maligned throughout the state. In many areas it’s considered inedible since the flesh may contain toxins caused by their feeding habits. The small croakers like nothing better than feeding on the small organisms that live on the bottom, organisms such as seaworms and clams, that themselves contain toxins from living in toxin-infused areas. Most of the concern is from urban areas and bays (like San Francisco bay) where benthic (bottom) areas are often saturated with toxins. The white croakers at Pacifica are, as far as I know, much safer to eat. Of course the fact that they may grab bait intended for more prized fish or the fact that they are feeble fighters at best, are separate questions.