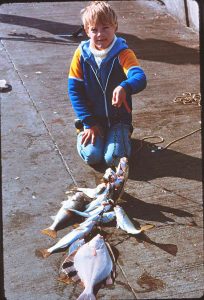 A second fish is Pacific tomcod, a fish that seems to be rarely identified correctly. Due to its size it is an easily overlooked fish but Pacifica is one of the few piers in California where they have been caught. There is a question as to if their numbers have decreased or if few are reported due to this incorrect identification.

Far too common are the bait-stealing staghorn sculpin (bullhead), which are much despised (but which also make good striper bait).  No one admits to liking the small sculpins although I’ve had a few people tell me they are actually tasty.

Surprisingly, a few rocky-shore species also show up at this mostly sandy-bottom pier.  Many lingcod have been landed (including a 28-incher in August 2006) as well as large and small cabezon (to over 20 inches). Kelp greenling included a 14-inch fish caught by PFIC member West Coast Dave in March 2005. Rockfish will also make an occasional appearance, most often a grass or brown rockfish although small, juvenile bocaccio sometimes enter into the mix. None of these are common but a few will be landed each year, generally down at the base of the pilings where the mussels act as attractants. 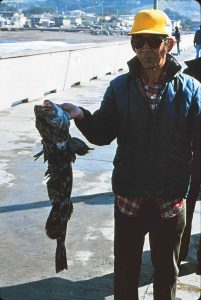 Mid-water and Top-water Schooling Species — Jacksmelt and topsmelt are common throughout the year. Top-water baitfish come and go with Pacific sardines and northern anchovies most common. Occasionally schools of Pacific herring make a showing (generally in winter or spring while occasionally Pacific butterfish (pompano) are also seen.

Flatfish — Flatfish include good numbers of Pacific sanddab (generally during the winter months), quite a few sand sole (Pacifica is one of the best piers in the state for these), and an occasional starry flounder. Anglers who make the effort, proper rigs and live bait, may also encounter an occasional California halibut during the May through September season. 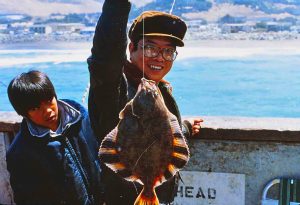 Sharks and Rays — As for sharays, the sharks and rays, occasional fish are taken but rarely in large numbers considering the plethora of anglers who fish the pier. To be fair though, few anglers seem to specifically target the sharks, most are too busy fishing for striped bass and salmon. Leopard sharks probably lead the hit parade of sharks followed by brown smoothhound sharks and an occasional thresher shark.

I’ve taken leopard sharks and brown smoothhounds but seen few of the larger sharks. Dogfish to 40-inches have been reported at times while PFIC regular Red Fish took a 45” soupfin shark in 2017. Thresher sharks do seem to show up most years, usually during the summer if the salmon are around, and a few will be taken (including a 10-foot-long thresher in August of 2010). It’s not clear if they are chasing salmon or the same baitfish the salmon are chasing but they generally appear about the same time. Some anglers do fish for the longtails but the numbers rarely justify targeting them specifically.

Bat rays (aka mud marlin) are also encountered, including some of the big old mama rays, but again the numbers rarely justify an expedition specifically for the rays. If you want mud marlin head to piers inside San Francisco Bay.

Skate too show up. Most will be big skates and they do reach a big size. One estimated to weigh at least 80 pounds was caught in 2006. 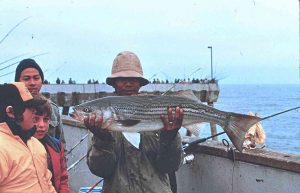 Salmon — Pacifica became famous in the ‘90s as the state’s number one producer of pier-caught salmon. During one weekend alone, July 8-9, 1995, over a thousand salmon were landed on the pier. In fact, July 8 may have seen as many as 1,000 salmon landed on that single day. After a while, most people gave up on trying to keep an accurate count of the fish (although regulars tend to agree that it was over 800 fish). So many fish were landed in fact that the Fish and Game deputies finally came out to the pier to check on the action. Most notable was the citation to one angler who had caught 17 salmon all by his lonesome self, a figure that is (if my math is correct) about 850% of the 2-fish limit.

I argued one day that Pacifica had seen a decline and it just didn’t see as many salmon any longer. Not all anglers agreed. Longtime PFIC regular Calrat replied (May 8, 2007): “I often contact regulars at Pacifica that also fish other areas with me and they have had phenomenal salmon takes every year thus far. People say that the Pacifica salmon take is down only because a small percentage of people still catch them. Sure, they’re not seeing half the pier take off with numbers anymore but the guys who have been out there over a vast number of years (like the Filipino Mafia) are still going out there landing a great many.”

In response, I decided to check the PFIC Message Board. It showed he was right—to some extent. July 11, 1998—over 200 salmon taken to 25 pounds. July/August 1999—many salmon taken on most days. August 2001—many salmon with some days seeing as many as 40 landed including fish over 30 pounds. July 2002—a lot of salmon showing up. July 2003—salmon to 29 pounds have arrived. June 2004—Many salmon limits being taken of salmon but most are under 20 pounds; on June 30 over a hundred salmon landed. July 2004—the pier is packed; saw over 50 salmon landed and people were leaving with limits by 11’ish. A lot of baitfish in the water—sardines, anchovies and shiners. One later reports said one day saw 300 salmon were caught in one day. No year has matched or surpassed those 1995 numbers but some years did still see some pretty good numbers of salmon.

Rare today is the angling seen in the ‘90s but some years do see conditions that seem ripe for good fishing (and the answer is usually bait in the water, bait usually attracted by plankton). A report by Danthefisherman on October 11, 2006, a period of good fishing for mackerel said: “Miles and miles of bait. People were filling their buckets with anchovies… five at a time. The anchovies went on as far as you could see. There were a few whales hanging out on the horizon as well, probably cashing in on the bait. As the sun was setting, there was so much bait jumping, it looked like it was raining. They were average size, but there were a few waves of 8-9” ‘chovies. The word on the pier is that the mackerel come in after the anchovies.” 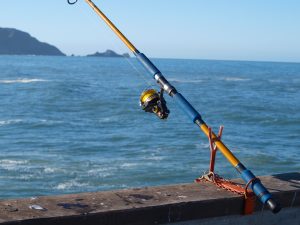 Anomalies.  Sometimes uncommon or rare fish show up at a pier and sometimes there isn’t any appreciable reason. Sometimes there is.A change in water temperature is most often the cause. El Niño years that see warm-water being pushed north along the coast is a primary factor for fish migration. The warm waters often bring more southerly SoCal and Mexican species with them. The La Niña, cold–water years seem to have far less impact but may bring a few more northerly species south. Of course the water temperature also ties in with bait fish, aka food for the larger fish, that also respond to the different water temperatures. Fish go where there is food and if bait fish (food) moves north or south many of the larger fish will follow.

When the warm El Niño waters reach the Bay Area it’s almost inevitable that a few of the more southerly fish will be caught at Pacifica. As such, the fish are anomalies and not something an angler should plan to catch.

An example is white seabass (actually a large croaker) that for most of the late 20thcentury (1960-2000) was considered an uncommon, almost rare catch in San Francisco Bay. It’s an interesting statistic because there was a time when white seabass spawned in Tomales Bay every year and were caught annually by both sport and commercial fishermen. They declined due in large part to the gill nets employed by commercial fishermen but appear to be making a comeback. Luckily, they are still common in Monterey Bay (so not too far south). 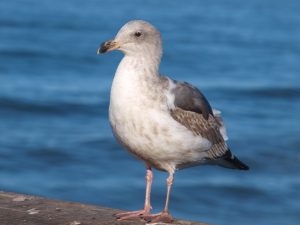 Barracuda are a species rarely seen this far north. Nevertheless barracuda were reported from the pier in 1992, a strong El Niño year. Barracuda showed up again in August of ’99 and September of 2001 when a 39-inch barracuda was reported from the pier. Surprisingly, the latter two years were not El Niño years (in fact 1999 was considered a strong.La Niña or cold-water year.

Some years will also see Pacific mackerel make an appearance. Reports in August and September of 2006 saw “mackerel everywhere along the pier” and told anglers to bring their Sabiki rigs. 2009, a moderate El Niño year, saw another big run of mackerel.

And, I’ve even heard tell of two giant (black) sea bass, both seen in 1999. Apparently one, a youngster, was estimated to weigh about 40 pounds, the second, a monster, was guesstimated to weigh at least 200 pounds. However, I have been unable to substantiate either of these catches.

A species seen once in a blue moon (why not a blood moon or super moon?) is Pacific hake. More common to deep water, they often rise to the surface at night. Infrequently they may decide to partake of the offering of a Pacifica angler who has gotten up and is on the pier at the crack of dawn. If immediately put on ice, or, even better, if filleted and put on ice, the fish is fairly good eating. If not put on ice it’s a mushy inedible fish. They carry a parasitic protozoan (Kudoa paniformis) in their muscle that produces an enzyme that liquefies the muscle tissue after death.