The date was August 25, 1966, just nine days before my bride and I would tie the knot. The plans were finished and hopefully everything was ready to go. It was time to relax and this would be a day for fishing, a passionate sport that my future wife Pat had already learned would be the “significant other” in our marriage.

It was my first visit to the Oceanside Pier and my hopes were high. Unfortunately, the fishing was slow, really slow, and I only caught one lone fish. Subsequent trips were much better but it showed that there is never a guarantee when it comes to fishing, success can ebb and flow and change with the years.

Oceanside too has seemed to ebb and flow over the years. In 1966 the town was a fairly inexpensive place to live and was certainly a “Marine town” with all the obligatory shops catering to the needs of young men lonely and perhaps a long way from home. At the time the main street through town reminded me of lower Broadway in San Diego with its shops that provided low cost rings, tattoos and other goodies for men in the Navy. It was the Vietnam era and a different time. 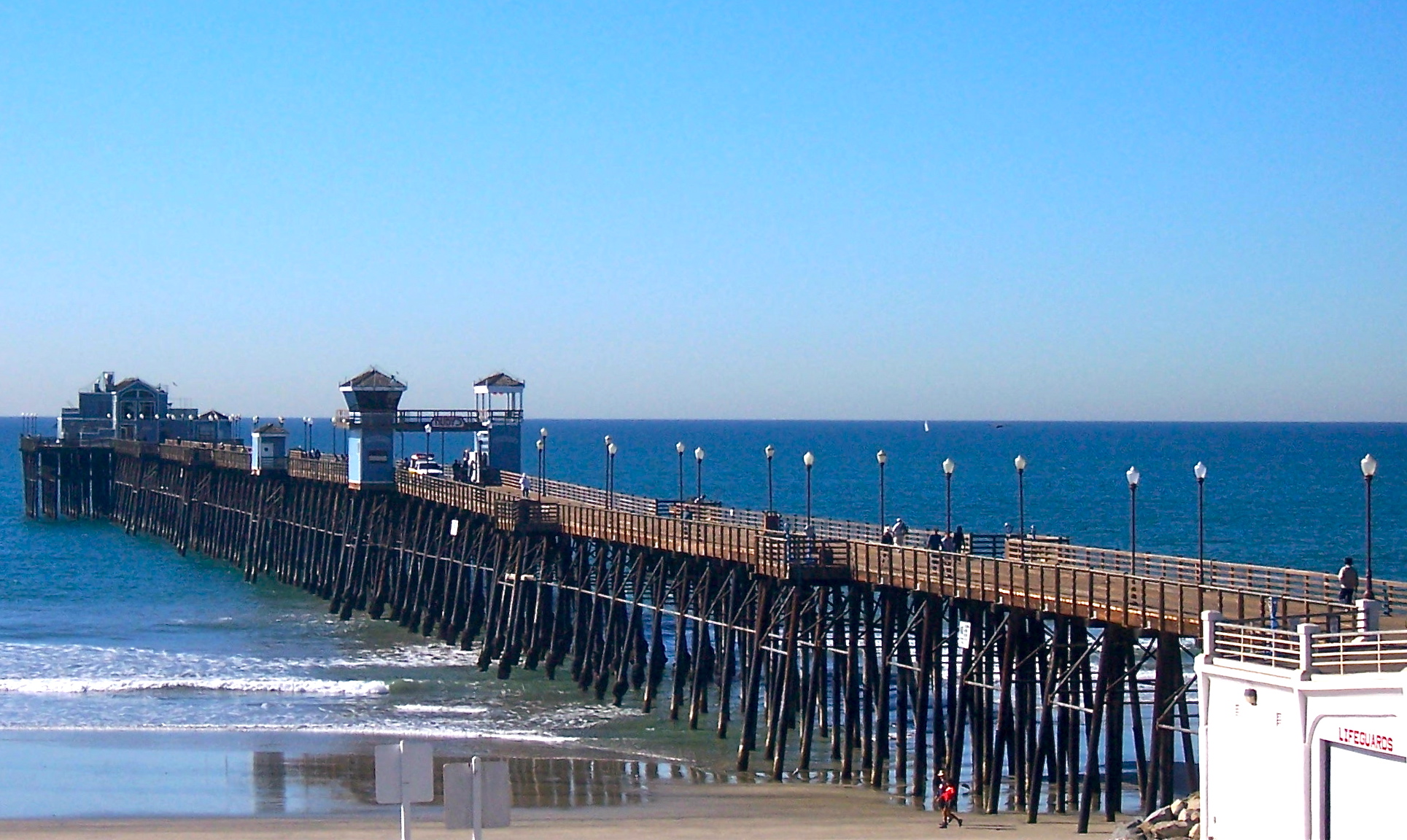 Today Oceanside is expensive, perhaps not as much as other “North County” towns to the south, but it’s getting there. Today the shoreline is becoming home to luxury hotels, nice places to stay but different from the cheap motels that once lined the old Pacific Coast Highway (PCH). Today the city seemingly wants to upgrade the image of Oceanside (as if it is really needed).

One thing that hasn’t changed is the importance of the Oceanside Pier to the city. In 1888 the city of Oceanside was officially incorporated and that same year a wharf company was formed. Money was raised, work began, and by late summer the wharf had reached 1,340 feet into the Pacific before the money, and the work, slowed. The wharf would be finished in 1889 but would simply be the first of Oceanside’s wharves/piers to suffer damage from storms and eventually be replaced. Time after time citizens recognized the importance of the pier, both in attracting tourists to Oceanside and in providing recreation for city residents, and time after time they voted to fix or rebuild the various piers. Today’s pier is the sixth pier and is as important as ever. A 2013 economic study for Oceanside found 74 percent of people visited the city because of the pier.

Hopefully the future will be bright. The pier is certainly one of the finest on the coast and one of the most visited. The pier itself is 1,942 feet long, which makes it the second longest wooden pier on the coast, exceeded only by the Ventura Pier at 1,958 feet in length (the Santa Cruz Wharf is 2,745 feet long but more of a commercial wharf than a pier mainly built for fishing).

It is also one of the most visited. A Fish and Game survey in 1990 listed the various piers and their annual attendance. The list was led by the big commercial wharves/piers that offer a plethora of commercial shops and restaurants—Redondo Beach at 4 million, the Santa Cruz Wharf at 3-4 million, Santa Monica at 2.5-3 million and Stearns Wharf in Santa Barbara at 1.6 million. The highest number seen at a fishing pier was Pismo Beach at 1.5 million. Oceanside was not listed due to the fact that the pier was under reconstruction when the survey was being done.

However, I have visited and fished every public pier in California multiple times and in my opinion none see the numbers of people that are seen at the Oceanside Pier. There may be times, usually during the winter months when fishing has slowed and the weather is iffy, when the crowds thin out. But visit the pier during the spring to fall months and it is often crowded from 6 A.M. until midnight (and later). 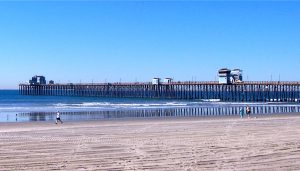 Of course the main attraction has always been the fishing. In fact, this was once considered a two-sack pier! That bit of knowledge was learned during a visit to the pier in July 1990.  The story came from a regular, a gentleman of a youthful 78 years of age, and one who fished about 350 days a year. He said, “Back in the thirties you needed to bring two gunnysacks with you when you visited the pier because of the barracuda. Back then we called them logs, you know, big fish about 10 or 12 pounds each, and you could only get about five in a sack lengthwise. You fished until you loaded a couple of sacks then you stopped, no sense overdoing it. Of course you might need a little help carrying the sacks off the pier.” How accurate that memory was after more than fifty years can only be speculated. There is no doubt however, that fishing can be very good at Oceanside and that it probably was outstanding  “back then.”

In fact, old pictures and faded newspaper stories that once sat under glass near the lifeguard tower gave evidence of how fishing was “back then.” Several pictures of large black sea bass (giant sea bass) that were caught from the pier highlight the pictures; one was of a 286-pound fish taken in 1936. Another picture was of a 200+pound hammerhead shark taken by Max Gray on September 8, 1949. A third showed a 42 lb. 1 oz. yellowtail taken from the pier in July of 1955 by Elmo Nealoff. Stories tell of an 11 3/4-pound bonito and a 10 3/4-pound lobster taken from the pier—both evidently records for the pier.

Of course the big pier is more than just a place to fish. For residents and visitors   alike it’s a place to gather, to see what’s going on, and a place to be seen. Even when the railings are lined with anglers, some people will be heading out to Ruby’s Restaurant at the end to have a bite to eat while some will simply be strolling the pier sampling the sights and sounds of the pier and ocean at night. 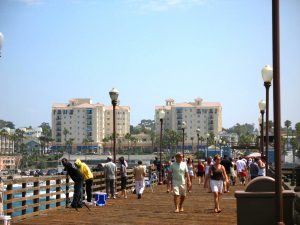 The mackerel gang at the end may be in a frenzy. A “mac attack” is on and the anglers are hooking one, two, three or more fish on every cast. Once hooked, the mackerel and the lines, affixed with bright glow sticks, are headed in every which direction. In response, the anglers are yelling in a polyglot mix of languages trying to keep their lines from being tangled. Or, increasingly, a sea lion is trying to nab the macks before they are pulled from the water; who will win the race? Once up to the pier mackerel are flying in every direction, some may be playing a Mr. Bojangles tune on the deck with their tails; others are in buckets that are overflowing with bloody water.  Down the railing an angler may have hooked a big shark or ray and crowds will gather to see if the fight ends in success. Maybe a lobster is pulled from the depth, or an octopus, or a squirming moray eel; all will quickly see an audience of interested onlookers.

Nature itself may be the star. Waves may be slapping the pier’s pilings and the pier may seem to shake. The winds may seem to be playing a harpsichordial tune on the wires and flags at the pier. If it’s a rough sea the ocean may actually seem aglow, phosphorescence created by billions of tiny bioluminescent dinoflagellates in the water.

Then there’s the people themselves, a sometimes-intriguing mix of locals and visitors. One such night I witnessed a group of teenagers huddled around three young men getting ready to dive from the end of the pier near Ruby’s. The three got up on the railing where the leader announced he would do a reverse tuck (I believe). The other two were satisfied to do a simple dive. With cell phone cameras ready to record the action they called out three, two, one, and jumped. The dives were successful and a cheer went up from their friends (as well as more than just a few interested spectators). Soon the young men had climbed the nearby ladder back up to the pier. Last I saw of them was one peering boldly into the back door of Ruby’s. It looked like he was seeking out one of the red-and-white, pinstriped waitresses. 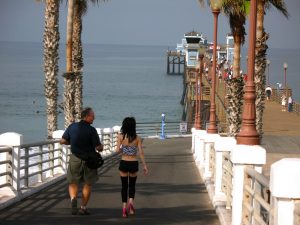 Nearby stood two ravishing young ladies shooting pictures of each other near the pier railings. Around the corner came a buxom platinum blond decked out in Hollywood chic and holding an all white miniature poodle. Next to me stood Jimmy and Eddie, two construction workers from Fort Smith, Arkansas who were taking in the whole scene. They commented that they just didn’t have this action back home. Such is California in the new century—and it can be an intoxicating mix at times.

The Environment. The pier sits over the Oceanside City Beach (a.k.a. Oceanside Pier Beach) a stretch of sand that once was one of the best beaches in southern California. That situation changed in the early ‘60s when a beach and dune area north of the main beach was turned into the Oceanside Harbor. The jetty for the harbor changed current directions and caused a loss of sand to the beaches to the south; eventually the rocky base of the beach was almost bare of sand and it remained a problem for many years.

Today the situation seems to have been somewhat corrected. The beach adjacent to the south of the harbor entrance, Harbor Beach, is given a regular replenishment of sand dredged from the harbor and in turn part of that sand drifts south. Today Oceanside City Beach is wide and sandy. Some even say that a few of the once abundant Pismo clams have returned; things are good. 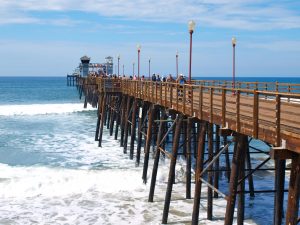 Even better, the pier seems to be about as productive today as when I first fished it in the ‘60s, although quantity is more common than quality. A lot of fish can still be caught but relatively few of the “trophy” fish (i.e., legal-size halibut) that were somewhat common in years past.

The Fish. The fish typically caught here are the normal sandy-shore, long-pier variety but water temperature can have a measurable affect on each year’s catch. As example, the Fish and Game angler surveys done in 2004 showed bonito as the second main catch at the pier (sandwiched between the number one sardines and number three mackerel. However, bonito did not show up in the 2005-2009 surveys; mackerel did not show up in the 2006; sardines did not show up in 2006 or 2008. Granted the surveys were limited but they give an idea of how things can change year to year. Bonito normally show up in warm water years while sardines have had drastic up and down cycles.