Recent reports indicate the pier is now closed for repair and possible reconstruction.

Although the stories vary somewhat, striped bass were introduced into California waters near Martinez in 1879. Some accounts say the fish were dumped into the water at Martinez, other accounts place the actual site near Port Costa, a short distance to the west. In either case, stripers flourished in these brackish waters and to this day they are one of the main species of fish sought after by local anglers. Since angling effort seems to concentrate on stripers and sturgeon, it is not surprising that these are the two main species landed. However, there are several other species available to those anglers willing to give them a little attention. 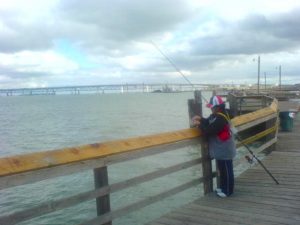 The pier sits in an attractive setting adjacent to the Martinez Shoreline Park and has long been popular by shore-bound anglers, casual strollers, and families that want to combine a little fishing with the other amenities offered in the park—benches and picnic areas.

Environment. The pier itself sits in relatively shallow water but offers decent water depth with a decent cast. Pilings are lightly encrusted with barnacles and the bottom here is a combination of mud and grass. Parallel to the pier runs an AT&T telephone cable that  likes to snag anglers’ lines. Dependent upon the season, waters can be fairly muddy and throughout the year currents and wind can be strong (or even very strong—see the e-mail note below). Originally this was a ferry landing wharf built back in the 1920s but in 1968 it began its conversion into a fishing pier, and several additions and changes have taken place in the years since then. 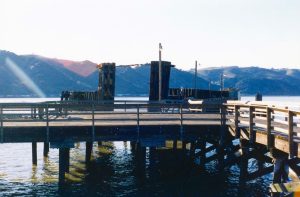 Today, the 1,200-foot-long wooden pier meanders off into different directions but primarily offers fishing at the t-shaped end. Deepest water seems to be at the left end, with shallower water and the entrance into the Martinez Marina at the right end. In addition, under the right end of the pier, is a barrier built to protect surge from entering the marina. This prevents fish from swimming through that area but does present two distinct offerings of water; the deeper and rougher water out from the pier and calm protected water on the inner side of the barrier.

As mentioned, the main fish that are caught here are striped bass and sturgeon (white sturgeon)  and both of these are generally caught straight out from the end of the pier. Summertime will usually see quite a few bullheads (staghorn sculpin) while late summer to fall can see saltier water and an infusion of saltwater perch. Most of the perch will be shinerperch but occasionally other species may also show up. Most of these will be landed on grass shrimp and pile worms. Jacksmelt and an occasional shark and ray may also show during these saltier conditions. 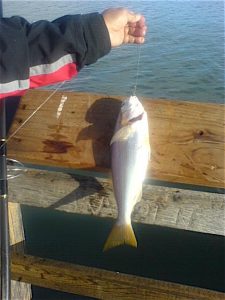 Until the mid-80s, this was also an excellent area to catch starry flounder during the winter and early spring. However, fewer and fewer flounder seem to be caught, as is true to a degree also with the larger stripers.

Every winter will also see a few steelhead trout caught and almost all are caught in the quiet inner waters near the marina.

One species that was a problem for anglers for much of the early 2000s, but one that now seems to have largely disappeared, was the Chinese mitten crab. For years the bothersome creatures seemed to multiply in numbers and  it was, at times, almost impossible to keep bait on the bottom when they were around. But that has changed and hopefully they will not return. 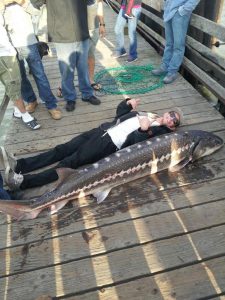 Fishing Tips. Since large stripers and sturgeon are fairly common in these waters, come prepared with your heavier gear. A medium action rod and reel will work but have at least 25 pound test line, and even heavier if you are specifically after sturgeon. Both white and green sturgeon can be caught here but by far the larger whites are the fish you will catch. Unfortunately, you will catch ten shakers (those under 48 inches) for every keeper but trophy fish are always a possibility.

The best baits for the sturgeon are generally ghost shrimp and mud shrimp with grass shrimp coming in third (although the stomachs more often than not are full of crabs and clams). Fish all of these baits with a double hook, sturgeon-style leader and a sliding sinker rigging; do remember to be patient when Mr. (or Mrs.) Diamondback starts to play with your bait. Sturgeon can be caught year-round but traditionally the winter season with its muddy water seemed to offer the best fishing. However, during the late ’80s and early ’90s (perhaps due to the drought), summertime offered fantastic sturgeon fishing. In particular, July always seemed to show a lot of sturgeon being landed at the pier. Time of day doesn’t seem to make much difference but a fairly strong tide is best for the big fish.  Some regulars report that fishing from the east end (Chevron sign) or the west end are the best places to fish. There are many snags near the center of the pier.

White Sturgeon caught by “stinkyfingers” in 2005

Stripers are more nocturnal with best fishing often being in the early evening and they too seem to like muddy water. The stripers like shrimp but also go for live bullheads (staghorn sculpin) and shiners. They also often prefer a nice slab of anchovy, sardine or shad. When the water is the muddiest is when many anglers swear on the smellier fish bait. They feel that at those times the stripers are really using their sense of smell instead of sight, and they’re probably right. An additional approach here would be to use fish attractants on your bait for an even stronger appeal.

Although some striped bass will be caught here year-round, the peak period is between April and September. One final note on stripers is on the use of artificials. Although most boat anglers use artificials, few people at the piers seem to use them. Casting with Cordell Spots, Hair Raiser jigs, or wormtail jigs, will often produce a striper in these waters. 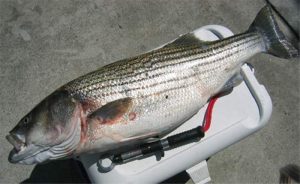 As mentioned, steelhead can be caught here most years, winter through spring. The best bait seems to simply be a nightcrawler or pile worm fished under a bobber in the inner-harbor water. An alternative is to try spinners or small spoons but these don’t seem to catch as many fish as the simple worm riggings.

Finally, if flounder are around, fish for them on the bottom using a sliding sinker rigging, size 4 hooks and grass shrimp, pile worms, or cut anchovy for bait. Generally these will be caught late winter to spring if they are around.

Although some sharks and rays may show late summer to fall they’re always an unexpected, incidental catch. Biggest I’ve heard of was an almost hundred pound bat ray that was hooked, fought, landed, and weighed in late August ’09.

Although caught in far fewer numbers than white sturgeon, the smaller green sturgeon is also sometimes seen. Although once considered a viable fish to be caught, it is today listed as a  “threatened” species under the Endangered Species Act and California regulations are strict — “(a) Green sturgeon may not be taken or possessed. (b) Green sturgeon may not be removed from the water and shall be released immediately.” Obviously a sturgeon hooked from a pier is different than one hooked from a boat when it comes to removing the hook and releasing the fish. One option is to simply cut the line but most feel that is not good for the fish. A better option may be to carefully bring the fish up to the pier in a hoop net, remove the hook, and immediately lower the fish back down into the water via the net. We have heard different opinions on how wardens would react to this option. 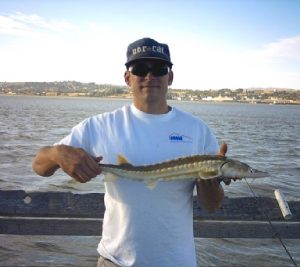 The rules have changed since this green sturgeon was taken by John Mason in 2004. 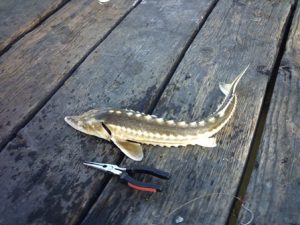 History Note. By the time the Central Pacific Railroad connected through Martinez in 1879, it was apparent that the deep waters of the Carquinez Strait could become a major port area. River craft and railroads could bring in grain from the rich Central Valley, while ocean vessels could easily tie up here and load for a mostly overseas market. By 1884, just five years later, piers and grain wharfs covered nearly all of the shoreline along the strait between Martinez and Port Costa (a distance of over five miles) and the area had become the leading site for grain shipments on the West Coast. Today most of these piers are gone but pilings still exist here and there to remind one of those more prosperous days.

Just off the Alhambra exit from Highway 4 sits the former home of John Muir; today it is a National Historic Site. It is an interesting visit for those who are conservation minded.

Facilities: Lights, a few benches and a fish cleaning station is found on the pier. (Courtesy of Mark Grim) If you are a baseball fan, you might like to take a moment to stop by the boat “Joltin’ Joe.”  It is on display near the bait shop adjacent to the foot of the fishing pier. The boat belonged to Joe Dimaggio and features a plaque at its base that gives a brief history of the boat and its famous owner. He was a native of Martinez and an avid sturgeon fisherman.