An unusual catch in July 2017 was made by PFIC veteran Robert Gardner (Red Fish) who caught a queenfish, a small croaker more common to SoCal waters.

A fish that is not limited to warm-water years, but one that is often seen and occasionally caught, is the common mola, also known as the ocean sunfish. These huge creatures, some of which can weigh over a ton, will occasionally be seen swimming near the pier (if swimming is the correct term since they usually seem to be floating on their side). Although I have never seen an angler actually hook (in the mouth) one of the fish, I have seen several anglers break out their jigs and snag the hopeless-acting creatures. Generally the fish were brought into the pier and then the problem became how to get it up onto the pier. A couple of times treble-hook gaffs did the trick and the anglers returned home with their unusual prize. I’ve never heard how they tasted although the Bible on molas is that they are pretty much inedible. Not surprising since they mainly subsist on jellyfish.

Several anglers at this pier have also “hooked a whale.” California gray whales migrate through this area each year and several have made the mistake of passing beneath the pier and becoming entangled in the lines of startled fishermen. It is usually a short fight, only long enough for the reel to become spooled or the hook to break loose. But, when it happens it provides a story that will be told again and again. 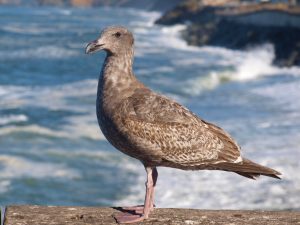 Great White Sharks— A species that is increasingly being seen, from San Diego to the Bay Area (and beyond), is great white sharks, the apex predator among sharks and one that is illegal to target or to keep if hooked accidentally (which doesn’t stop morons, knuckleheads, dunderheads, knuckle-draggers and self-proclaimed “Quints” from seeking them out.

The first report I saw of a great white at Pacifica was a message from PFIC regular Red Fish (Robert Gardner) who reported seeing a great white during the height of the salmon season in (about) 1991. Apparently the fish decided to grab a ten-pound or so salmon that an angler had hooked. Unfortunately for the angler, the shark was just a little more skillful at grabbing the salmon than the angler was at keeping it away from Mr. Sharkie.

As reported by Red Fish: “The guy moved the salmon out of the way once by moving his line. The shark made a quick, aerodynamic turn and lunged into the fisherman’s line severing the salmon from the head down. A stream of red, red blood immediately spurted across the top of the water emanating a small ring of blood. Up came a fishing line and a head of a salmon still breathing. Identification was kind of rough for me with my vision from 50 feet up where salmon look like trout.” Anglers guessed the white’s length at 12 feet and weight at 700 pounds but such guesstimates are almost always too high (and Robert guessed 9 feet as the length). Whatever the size, it must have been quite a spectacle.

Several additional sightings have been given on the PFIC Message Board over the years, a fact not unexpected considering that Pacifica’s waters are within the so-called “red triangle” area populated by great whites (Bodega Bay, north of San Francisco, out to the Farallon Islands, and south to the Big Sur region, south of Monterey).

Making the “news” in 2015 was a “cluster” of some 20 great whites that was spotted swimming together about 100 yards offshore of Pacifica’s beach. They were spotted by a Coast Guard helicopter that said most were between 10 and 15 feet long with a couple about 18 feet long. The news spread and people rushed to the pier for a look but none were hooked and they soon disappeared from the area.

Red Fish also mentioned that the old Pacifica bait shop, circa early ‘90s, had pictures on its wall of what were labeled an oceanic whitetip shark (weighing approximately 250 pounds) and a large blue shark, both supposedly taken from the pier. The blue shark sounds plausible, the more tropical whitetip a little doubtful. I’ve tried to track down the pictures but to date had no luck. But who knows?

Crustaceans.  While the pier today rarely sees the impressive number of fish seen in earlier years, it does yield good numbers of Dungeness crab. In fact, more Dungeness are caught at this pier than any other pier in the state. 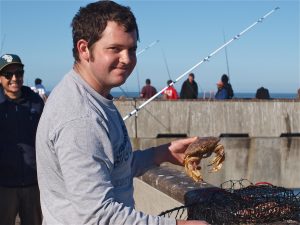 In part, this reflects the fact that it is illegal to keep Dungeness crabs caught from piers in San Francisco Bay. Rock crabs are just fine but Dungeness crabs are a no no since the Bay is considered a nursery area for Dungeness.

But, it is perfectly legal to keep Dungeness at this oceanfront pier and the pier is often jammed with crabbers seeking out the delicious crabs during the November-June Dungeness crab season—at least when the weather, tides and currents cooperate.  Of course the trio do not always cooperate. Pacifica is famous for strong winds and heavy, pounding waves. One PFIC report, in November 2007 said there were 15’ waves at Pacifica and that the crabbers had gone home (although a few misguided surfers were still in the water). The next day saw huge 27-foot waves crashing over the pier and both crabbing and surfing was called off. Terra firma was just a little bit safer than the concrete pier. Big waves and crabbing do not mix.

Still, good weather and tides do not guarantee good crabbing at Pacifica. It simply means Pacifica sees more crabbers than any other pier and a sufficient number of crabs are caught to keep the people coming back. 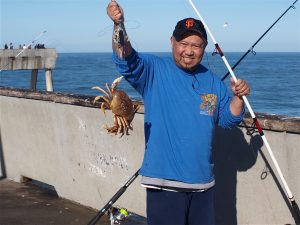 Rock crabs are also found at the pier, and can be kept year round, but Dungeness are the special crabs prized by most (although some prefer the slightly sweeter meat of the rock crabs). Crabbing does seem to have become more and more popular and at times, when the crabbers are out in force, fishing for actual fish is almost non-existent.

Fishing Tips. As at most piers, the key is deciding the type of fish you want to catch. Once you decide that the other key questions can be answered: what area to fish, what tackle to use, and what bait or lures to use? The only question that remains will be if you can find a spot on the railing.

As for myself, when I fish Pacifica I like to try for variety—some small fish quantity and some bigger fish quality. With that in mind I usually use two rods and several types of bait and riggings. One rod will be fairly light and rigged for perch; the second will be a medium action rod/reel that can be used for something a little bigger.

Perch —I have taken eight different kinds of perch at the pier and they fall into three general groups. The first group, and my favorite, is the large surfperch (redtail, calico and barred) that are found in the first third of the pier, from the breakers to about halfway out on the main stem of the pier. For all three species a high/low leader with two hooks above the sinker on short dropper leaders works best. I like to use torpedo sinkers but if the current is strong use a pyramid or triangle-type sinker that will grab the sand on the bottom. Hooks should be size 6 or 4 baitholder hooks. Use live sand crabs (if you can find them), pile worms, fresh mussels, or small pieces of shrimp or clams as bait.

All three species may be found year round but he winter months are the best for the large surfperch. 79% of the redtail surfperch, 91% of the barred surfperch, and 67% of the calico surfperch I have taken from the pier have been caught December-February even though only 31% of my trips to the pier were during those months.

The second group of perch is the smaller schooling surfperch. Walleye, silver and spotfin surfperch provide most of this action. Although most anglers like to fish for these with bait rigs, usually Sabiki rigs, I prefer a high/low rigging with a torpedo sinker at the bottom. However I switch to size 8 or 6 baitholder hooks. Small pieces of bait finish the presentation.

These perch tend to be found in the mid-level area of the water and what I do is drop the rig to the bottom and then move the bait up a couple of feet at a time. When I begin to feel bites, that’s the area I fish. Sometimes schools of walleye seem to be under schools of silvers and spotfins (but often they are mixed).

But, to be honest, some people refuse to use anything but bait rigs; they swear by them, I swear at them. They work and are easy to use. You can use a commercial six-hook bait rig like a Sabiki or Lucky Lura, or make your own leader with three or more size 8 (or smaller) hooks tied directly onto the line. Given the amount of $2-4 Sabikis seen tangled in the pilings or hanging from the pier, I would suggest making your own.

Most of the time when using a bait rig you do not need any bait on your hooks, a simple up and down jigging motion will hook the fish. However, if you sweeten a couple of the hooks with a small piece of bait, more fish may be attracted to your line. Sometimes though you need bait with the above-mentioned bait being best and, as with the high/low rig, simply drop the line to the bottom and slowly reel to the top until you find the fish.

When using pile worms or shrimp, you may also find yourself catching Pacific butterfish aka pompano. They are a small fish considered to be delicious eating. However, most are so small they seem to deserve being released.

The third group of perch is the seaperch—striped, rainbow, rubberlip, black, white and sharpnose. The first four typically are found down around the base of the pilings. Bait and tackle is similar to the first grouping of large perch (high/low, size 6 or 4 hooks, and a small torpedo sinker). Fishing for them requires care since you want to keep the rig near the mussel-covered pilings without getting snagged on the pilings. I always give it a try just to see if any of the seaperch are around but usually move on to the search for other species at some point.

White seaperch are encountered on the bottom areas away from the pier. Most are an incidental catch by those fishing “for anything” on high/low rigs baited with pile worms or pieces of shrimp.

Sharpnose seaperch are sort of an in-between species of perch sometimes caught on the bottom and sometimes caught mid-depth. A high/low rig with size 8 or 6 hooks baited with pile worms or small pieces of shrimp offer the best chance for the elusive perch that are only caught at a few piers (most in Monterey Bay).