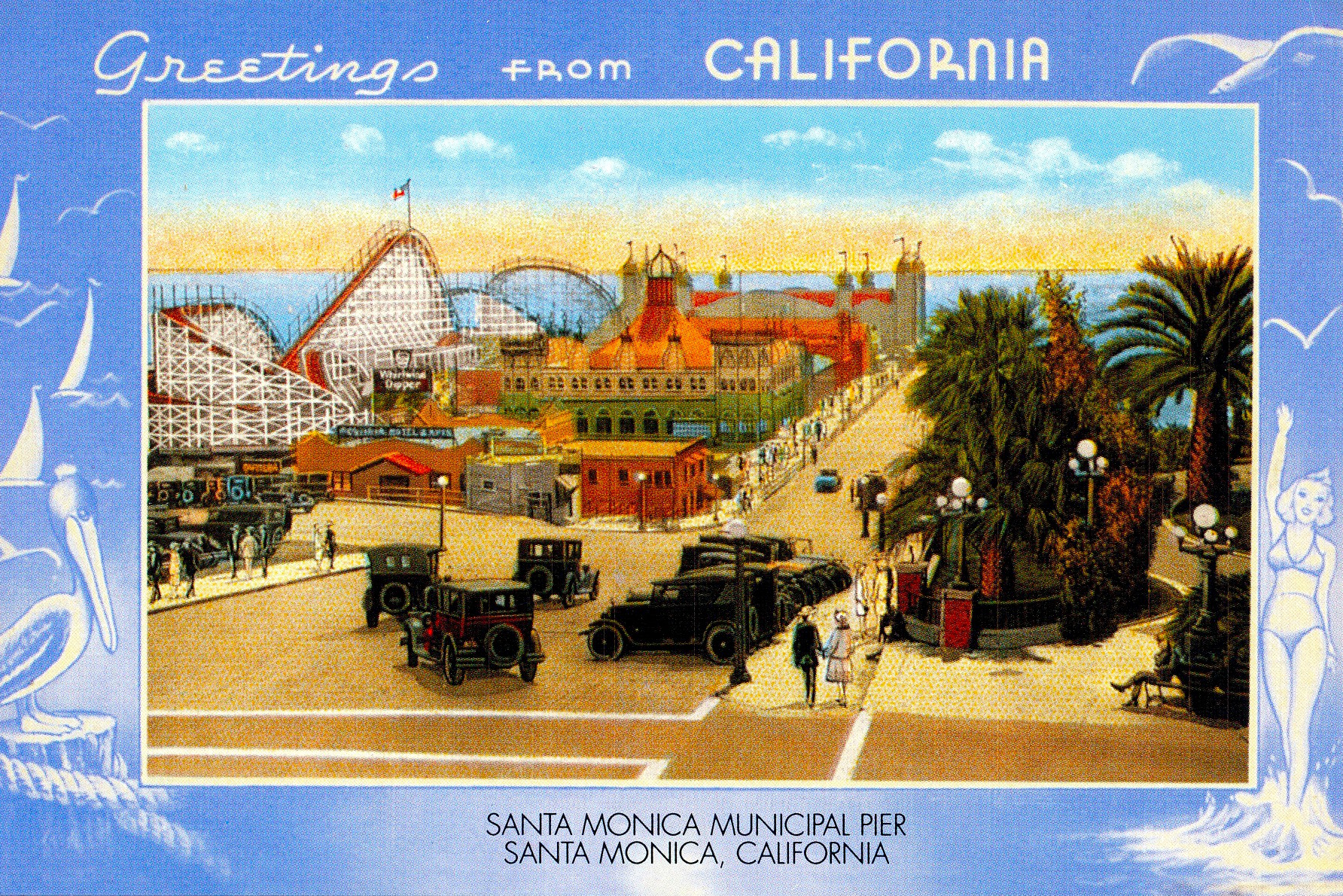 In the 1920s fishing became an even bigger attraction at the Municipal Pier. In 1921, T.J. Morris first began his Sportfishing operation. By 1925, his Morris Pleasure Fishing Company operated five boats from the pier of which three were regular Sportfishing boats: the Palisades, the Ameco and the Wiko; the Myle and Lark were charter boats. The Norwahl, a fishing barge, was anchored a short distance from the pier. Competition existed on the pier. A.A. Hernage operated two boats—the Colleen and Freedom. The Owl Boat Company operated the Guilio, Cesar, Virginia and Kitty A. By 1928, the barge fishing fleet had expanded to four boats—the Fox, Minnie A Caine, Charlie Brown and the Norwahl.

“My brother Todd and I used to wake up at 4 am and hurry to the pier to get on a bait boat and haul bait. When we turned 14 or 15, in the summer, we could go out on fishing boats and help the crew with the customers. We could also fish and later sell our fish and the crew’s catch. After school at the John Adams Junior High School, we would haul fish for passengers from the pier landing to the parking lot by the La Monica Ballroom. We used a heavy hand truck and got 10 cents a sack.

Fish were so plentiful you could catch a Black Sea Bass from the end of the Pier. Once in a while we would get picked up by the police for fishing without license. The police would put our fish on the back of their trucks and take us down to the station. There they would lecture us and finally let us go, but our box of fish would be empty.

On Labor Day, a fishing boat called Amico capsized, and 16 people drowned. I was supposed to go out on that boat, but it was so full, a buddy and I went home and learned about the accident later. We raced down to the Pier, and I stood with a brick in each hand to stop the curiosity-seekers from blocking the ambulances. A big cop named Chris Christianson walked by and said, ‘Nice job kid.’ My brother gave all his clothes to survivors, but ended up in overalls. He also gave artificial respiration to a young lady, but she didn’t make it. The boat Freedom rescued many survivors without lifejackets, but also became dangerously overloaded. Other boats from the pier raced to help other survivors.

I washed dishes at the Fishnet Restaurant on the Pier, the fishing barges Minnie a Caine and Charlie Brown (owned by Olaf Olson) for a $1/day and all I could eat.”

A huge storm in February of 1926 destroyed the landing stage at the end of the Municipal Pier and soon wrecked the end of the Looff Wharf by the La Monica Ballroom (pilings were first pulled loose from the bottom and then hammered into other pilings). Then, in April a new storm tore loose most of the boats moored to the Municipal Pier. The ballroom and pier were soon rebuilt but as a result of the storms, plans began to be developed for a breakwater to be built 2,100 feet offshore. It would provide protection for the pier and provide a safe anchorage for boats.

For ordinary fishing purposes… the Santa Monica municipal pier waters have a vast quantity of bass, barracuda, yellowtail, halibut, sea trout and other small catches. The fishes average from three to eight pounds. Those with the greatest appetites, to judge from recent hauls, are the barracuda. They are coming in larger numbers than bills at the first of each month.

On September 11, 1931, voters approved a Breakwater Bond Measure but it would be nearly three years later, not until August 5, 1934, that the breakwater and harbor would be officially dedicated. 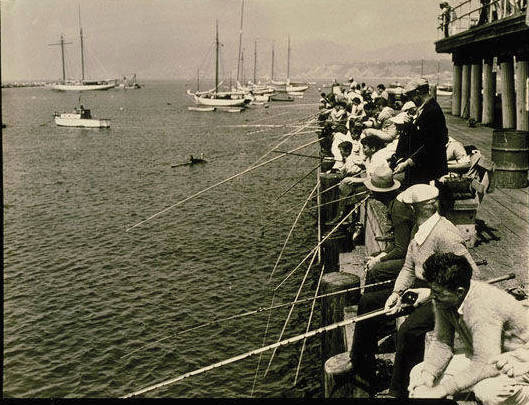 In 1928 the Looff Pier was sold once again. The new owners then asked for a 200-foot extension to the pier and permission to base the Santa Monica Yacht and Motorboat Club on the pier. Over the objections of the Sportfishing interests on the Municipal Pier, permission was given with the stipulation that 197 feet of free public fishing space had to be reserved for anglers.

In May of 1930 several incidents prompted officials to question regulation of the sportfishing fleet. Soon a new loan franchise was offered by the city and it was granted to Captain Olaf C. Olson who also had a small landing on the Looff Pier. He subleased space to the Owl Boat Company, the Hernage family, and to the Morris Fishing Fleet. Late that year they were joined by Charles Arnold, who converted his 300-foot-long Kinelworth into the fishing barge Star of Scotland. He soon operated water taxi service from both the Santa Monica Pier and Ocean Park Pier to his fishing barge. (The Star of Scotland would later gain a more notorious reputation when it was converted into the gambling ship Rex. The infamous war of 1939, between the state and the gambling ships anchored three miles offshore, was finally resolved after a nine-day siege of the Rex by a flotilla of Fish and Game boats.)

In 1934, at the same time the new breakwater and harbor were being finished, the Municipal Pier was refurbished. 125 new piles were placed to enlarge the pier’s ‘T’ to 140-feet, a new lower deck was built for boat landings, and the pier’s top was resurfaced.

The Depression years of the thirties were rough years for the local amusement piers although visitors had their choice of pier fishing, Sportfishing from boats, amusements on the Looff Pier, water taxis to the fishing barges (and later to the gambling ships), and boating activities in the harbor. In the summer of 1934, Security First National Bank foreclosed on the Santa Monica Amusement Company. Later that year the city leased the La Monica Ballroom and converted it into a convention center and offices. By the spring of 1935 the amusement company filed for bankruptcy. In 1936 the bank, city and old amusement company were all in the courts and no one seemed to have a clear cut case for solution of the pier’s bills or various leases. So, off and on for a number of years, the bank would find itself in control of the pier. One result was conversion of the ballroom in 1937 into a roller rink. 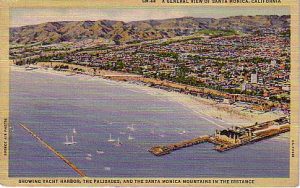 1938 saw a new Sportfishing operation begin with the arrival of Bob Lamai and Preacher Scott Hume. Their boats included the Faith, Freedom and Pali, a small barge, Miss Dianna, and a charter boat Chi-Camoi.

In 1939 a new group of investors took over the Looff Pier. They were granted a 25-year lease by the city and began to order changes for the pier with the most drastic being a new carousel. By 1940 this group too would find the pier unprofitable, default on their mortgage and the bank would once again gain control of the franchise.

1939 was the year that construction of the 650-foot bridge connecting Colorado Avenue to the Municipal Pier began. It was opened on June 17, 1940. That same spring the pier was redecked as a WPA project. In 1941 the Santa Monica Pier Businessmen’s Association installed the arched neon sign at the entrance to the bridge that still welcomes today’s visitors. 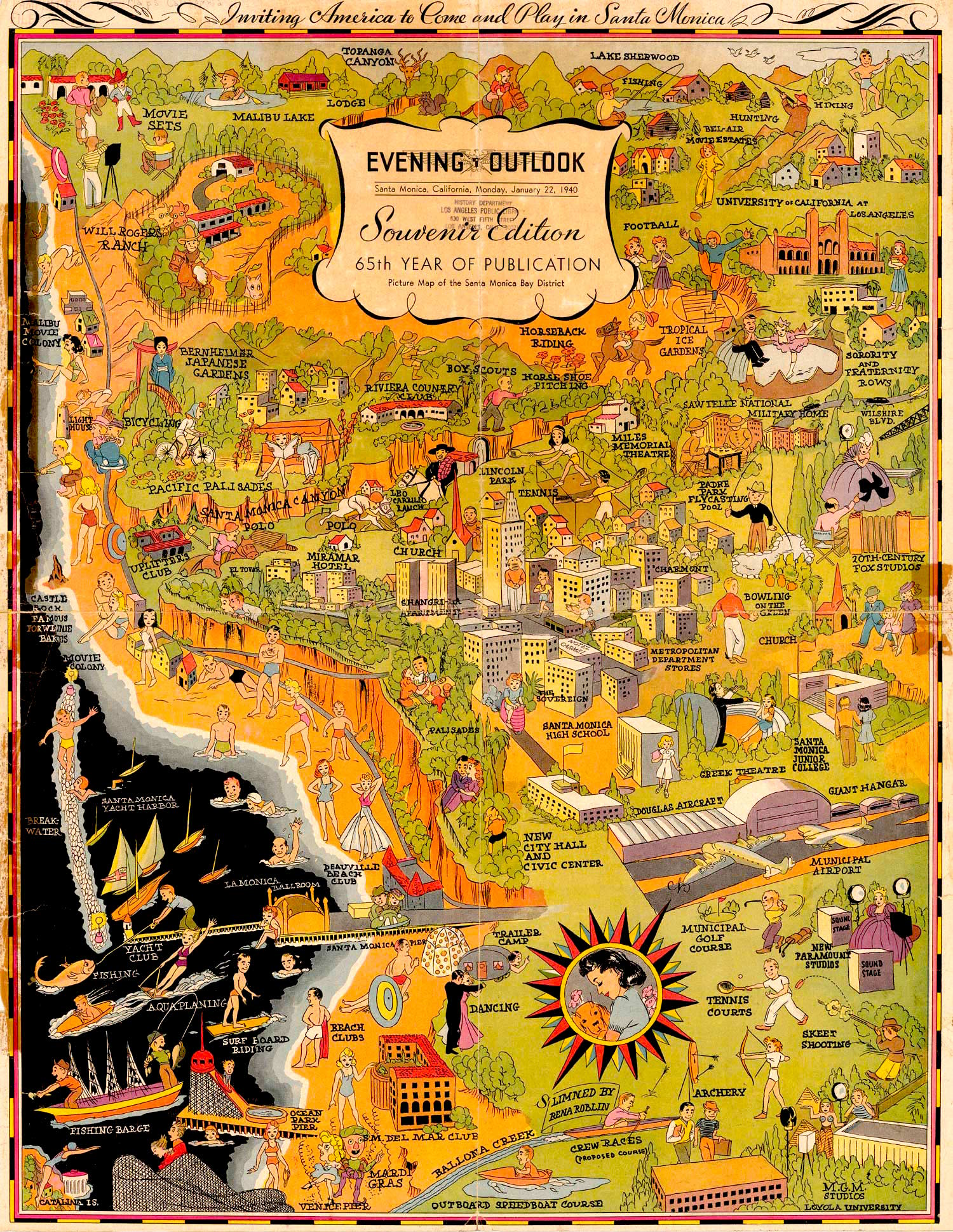 In 1940 Charles Arnold reopened his fishing barge. It was a sort of reverse osmosis when he bought the ex-gambling ship Texas. He soon gave it the same name as his former barge, Star of Scotland. However, the 261-foot-long boat sank off the pier during World War II.

The war years saw reduced activity at the pier although the mackerel fleet remained active in providing food for the war effort. However, in 1943, winter storms wrecked a number of fishing boats including the Sportfishing boat Palisades.

That same year also saw the bank sell the Santa Monica Pleasure Pier to Walter Newcomb the man who had taken over management of the pier at the start of the war. It now became the Newcomb Pier. At the time there were fifty-five businesses on the pier. In the spring of 1944, the La Monica Auditorium reopened as the Palisades Dance Hall but it soon closed. It could never gain the following of the La Monica Ballroom.

A frequent visitor to the pier was Johnny Weissmuller (Tarzan in the movies) who had been a lifeguard and enjoyed spending his afternoons paddleboard racing. His most memorable visit was on August 6, 1943, when he leaped from the pier and rescued a fifteen-year-old boy who was drowning.

The La Monica Ballroom finally reopened to large crowds at the end of the war when Spade Cooley the “King of Western Swing” rented it for his popular country-western band and began to use it for his live television program. By 1950 his show was the second most popular Los Angeles television program and he continued at the pier until 1954.

In 1946 Newcomb brought his 1922 Philadelphia Tobaggan carousel, PTC #62, to the pier after the Venice Pier closed. After renovation, it opened on June 27, 1947. 1946, also saw the first Santa Monica Fiesta at the Municipal Pier. Events included a Miss Santa Monica bathing beauty contest, paddleboard races, swimming exhibitions, acrobatics and gymnastic exhibitions. The latter had been held annually at Muscle Beach each Memorial Day weekend since 1935. In 1947 the event was enlarged with a large parade, and a Muscle Matinee complete with Mr. Santa Monica and Miss Muscle Beach titles.

In 1954 Lamia left and soon after Versal Schuler’s Santa Monica Sportfishing began to operate its fleet from the end of the pier. Schuler had previously operated out of the Ocean Park Pier. His boats included the Bright 1, Indiana, Maiden 1 & 2, Delaware, Jesabel, Pegasus and Kiaora.

Overall, the ‘50s seemed to generally be an era of decline for the piers, especially the Newcomb Pier after Walter Newcomb died in 1954. His widow continued to run the pier but few new attractions were added and some of the most famous features had lost their appeal. In 1955 the La Monica Ballroom became the Hollywood Autocade housing over 100 unusual cars. In 1963 the building was demolished.

$653,000 in repairs to the Municipal Pier (including replacing fifty-eight pilings, new decking, lighting, handrails and a new restroom were made in 1957. Then, in January of 1959 storms wrecked much of the remaining harbor and part of the pier; in May an additional storm damaged the Newcomb Pier.

In 1973 the city council voted to demolish both piers (since they were in need of expensive repair and seemingly had few amusements). It was a mistake by the council. A “Friends of the Santa Monica Pier” group was formed by merchants on the pier. They were soon joined by a citizens group, “Save Santa Monica Pier Citizen’s Committee.” The groups joined forces to defeat three of the council members who had voted against the pier and they were able to get the council to change its vote. Santa Monica took over operation of the Newcomb Pier in June of 1974. That same year saw a fire on the Newcomb Pier and a city authorization of $280,000 for Municipal Pier repairs. In 1975 voters passed a proposition that assured both piers would be preserved and on May 18, the Santa Monica Pier was dedicated as an official L.A. County Historical Landmark on Pier Day.

In January of 1976 work on restoration of the Newcomb Pier began (including replacing many of the pilings). Plans for several new restaurants were announced and the city bought the merry-go-round. But the late ’70s saw many of the plans put on hold due to delays caused by the Coastal Commission and the high interest rates of those years. Although the city spent $3.1 million on the pier between 1975 and 1980, plans were announced in 1981 to spend an additional $7.9 million for repairs and new attractions.