The pier though is quite safe, manned as it is by the Santa Monica Harbor Patrol, 24 hours. Says husky Harbor Patrolman Wayne Salkoski, himself a dedicated off-duty sport fisherman. “We’re in constant radio contact with the police.” The problem, as Salkoski sees it, is that a man—or woman or child—can get totally hooked on the alleged sport. The hooker as hookee. “It’s mesmerizing,” he says. “It’s relaxing. The ocean is a big pacificer. Especially under the moon, when they’re biting.”

Under the moon on a Saturday night, the Shark Slayer of North Hollywood pursues his esoteric craft with a single-mindness that blacks out the green-haired groupies who’ve clustered around him in an attitude approaching awe. Daniel Farmer his name is, known from Palos Verdes to Zuma, and his habits are ingrained. He catches mackerel in Redondo on one night, then uses them as shark bait the next night, in Santa Monica. “I don’t eat mackerel myself,” Farmer says. “Too oily. But the sharks love ’em.” Farmer hurtles a weighted line far out to sea, then slides slabs of mackerel down the line to the precise spot he’s chosen. “I’m setting up for a big something,” he says. “A shark, hopefully. A hundred-pounder. Got two 40s two nights ago. Best eating there is.”

Next to Farmer, Robert Khoury, 14, and Joseph Altin, 40-ish, unconsciously epitomize the unspoken bond among those who probe the sea for secrets. Khoury is using a simple, utilitarian pole baited with musssels, hauls in a perch, bass, mackerel—many of which he gives away (“If I see somebody needy”). He is a fishing fool, and his bucket overfloweth, but he is sometimes more eager than expert. Altin, on the other hand, has the best equipment, and a majorleague arm that enables him to fling his bait halfway to Japan. He is after sea bass, but has been known to land truly Brondingnagian bat rays. He is, by and large, sildent, adept, amused. Khourey is Lebanese. Altin is a former officer in the Israeli army.

Buford (Buff) Dantler, in vain quest for halibut several hours, decides instead on a fish dinner down the pier. “Wanna use my rig?” he asks the Wimp. The Wimp eagerly takes over Dantler’s vigil for an hour. He has heard that night fishing is the best. He catches nothing. 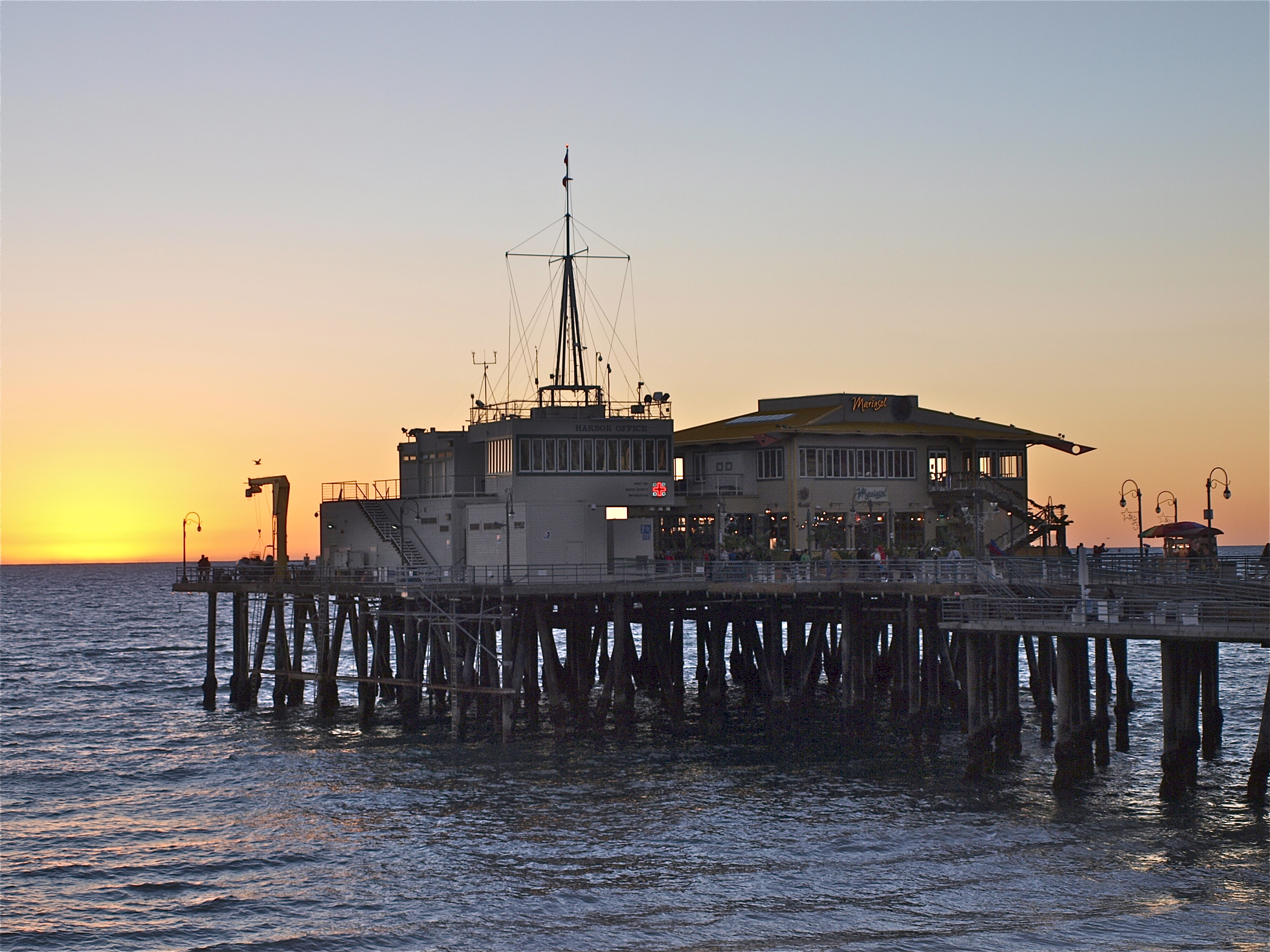 Unfortunately, the beach area itself can be nearly choked with people on a hot weekend day (especially in the summer). Parking can quickly become a problem and by mid-morning often becomes virtually non-existent. Traffic on the adjoining PCH (Pacific Coast Highway) can be stalled—for several miles.

Luckily, there is usually parking up on the pier. It’s a little expensive but no one seems to mind as long as there is a parking space. However, sometimes even the pier parking lots can be filled which makes it hard for anglers needing to tote their equipment out to the end of the pier. There have been some days when the signs said “parking lots filled’ and I’ve simply moved on to another pier. Such is life in a city and state that becomes more crowded each year.

By the way, if you visit the pier at night and partake of the scenic view up the coast you’re seeing “The Queen’s Necklace,” so called for the lights that line the curved shoreline from the pier to the beach at Topanga Canyon. Some claim it is one of the most romantic views on the West Coast although I would argue that the same could be said for a plethora of views from piers along the along the coast. 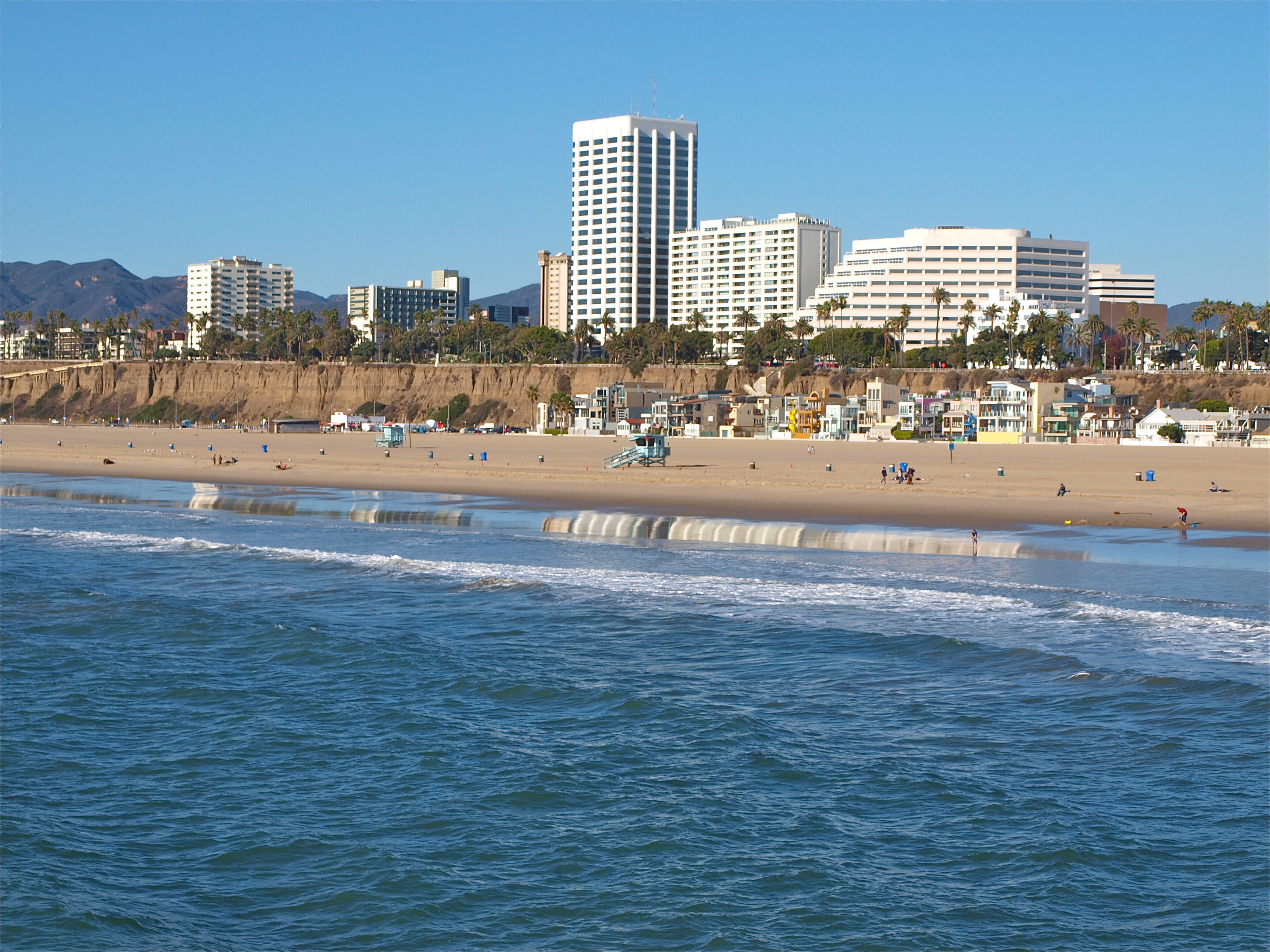 The Fish. There is also a diversity of fish although the species are basically the same seen at most SoCal, sandy-beach piers. 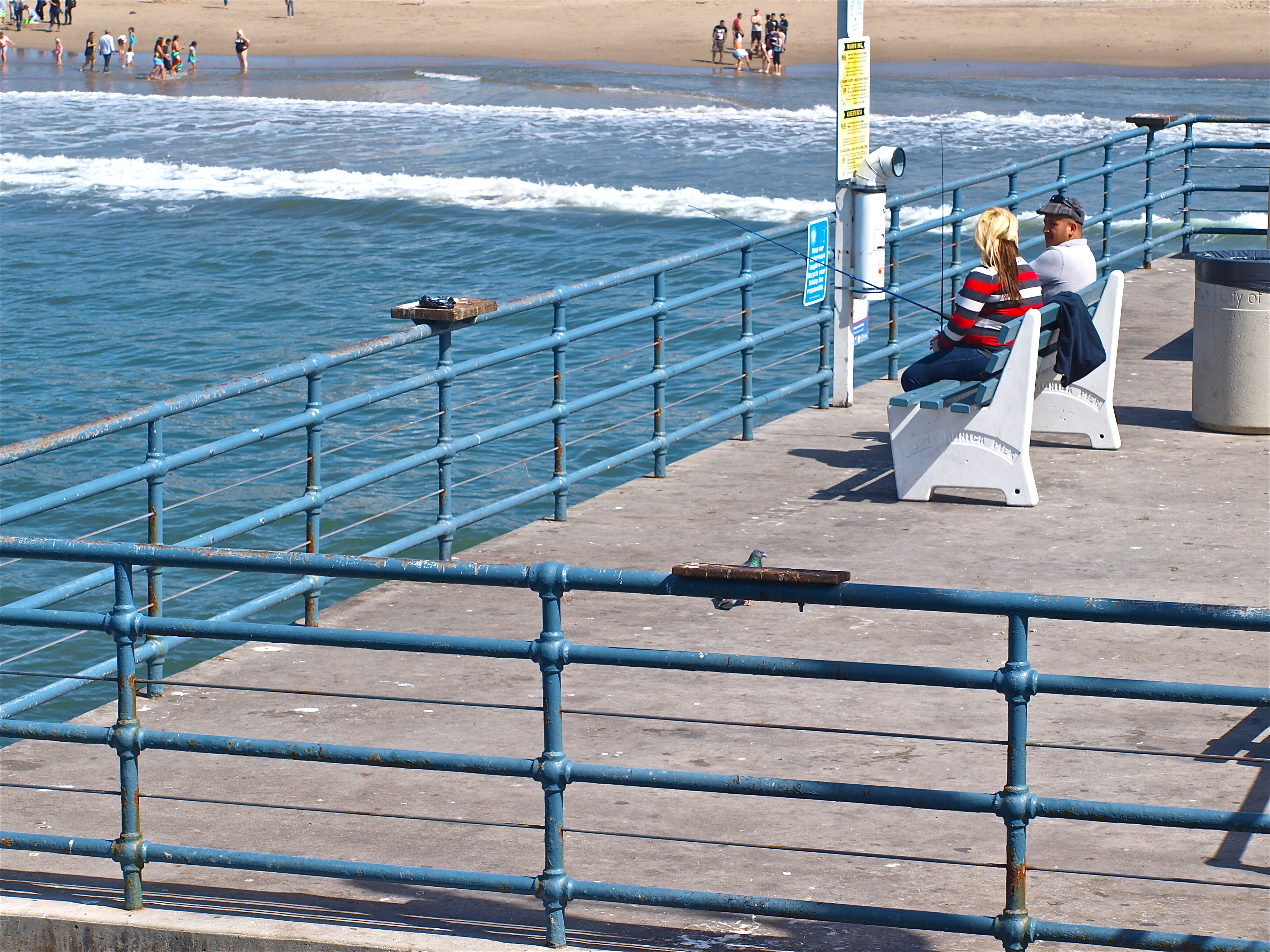 In the shallow waters will be found corbina and their various croaker relatives (especially yellowfin and spotfin croaker). So too will be seen some small rays and sharks including round stingrays, thornback rays, an occasional bat ray and smaller leopard sharks and gray smoothhound sharks.

Mid-pier waters see some of those same fish but also see more jacksmelt and mackerel in the top waters, smaller white croakers (tomcod) and queenfish (herring) on the bottom. A few bass start to show up as well as an occasional scorpionfish (sculpin). Mid-pier also sees more shovelnose sharks (guitarfish) show up as well as more of the larger bat rays. Most important, mid-pier is usually the best spot for halibut (although many will also be taken out at the end).

Fishing under the pier, a fishery made possible by the unique walkways that were built during the pier’s reconstruction, allows access to fishing by the pilings and it is here where the larger perch hang out along with several perch-like species and the large sargo.

At the end, in the deepest water, are found the largest number of mackerel, bonito (when they decide to show up), and the larger sharks and bat rays. 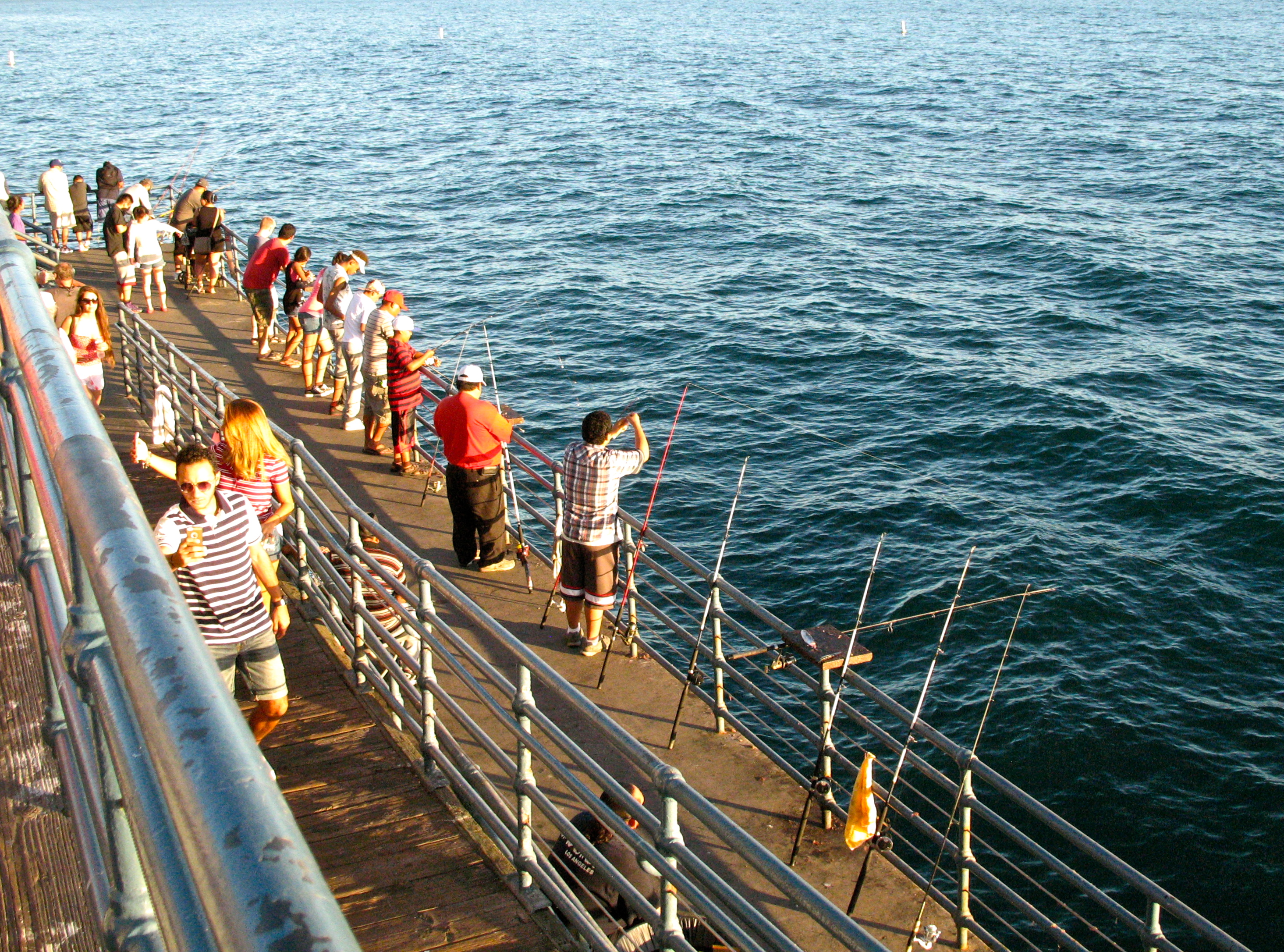 Unfortunately, because of the pollution in this vast metropolitan area, the Department of Fish & Wildlife recommends against eating an excess of fish from the area.

Fishing Tips. Anglers are offered different areas to fish. Some inshore waters are available from the outer railings of the Newcomb Pier and Municipal Pier (by Pacific Park) but because of the businesses at the shore end of the pier, fishing is restricted to the south side of the pier. Nevertheless these limited areas are the best area for several surf species. Many fishing areas are available mid-pier and at the end and these are heavily fished.

I have fished most of these sections of the pier at different times of the year and had roughly similar results so I’m not really sure where the hot spot is. Action does seem slightly better at the end and on the north side of the pier but this is only conjecture. My favorite fishing spot is on the walkways that allow one to fish next to the pilings. My specialty has always been perch and it’s rare when one can fish pilings for perch in such a manner. But not everyone wants perch.

At the mid-pier and the end, I have had my best results simply using cut anchovies on the bottom with a high/low leader. A variety of fish have been caught—including halibut. I often use only the last half of the anchovy and cut a diagonal angle from the bottom to the top of the fish. Although this runs contrary to normal halibut methods, I have caught more halibut here using high/low rigging than live bait leaders. As for the remainder of the anchovy, it is chopped up and used for chum.

However, most locals (and they normally know best) use live brown bait (small queenfish or white croaker), or live shinerperch (locally called 7/11 perch), and fish straight down in the depressions between the pilings. Quite a few halibut in the 22-37” range are hooked with these live baits. A few regulars also “drag” for the halibut. They put a long-shanked hook into a headless anchovy and then pull it along the bottom. If crowded, cast out and retrieve slowly. If it isn’t too crowded, you can walk your bait along the edge of the pier, always alert for the soft mouthing of the halibut. By the way, some of these local techniques were supplied by the good folks at the Santa Monica Bait and Tackle Shop out at the end of the pier. So thanks to Bob, John, Manny and the other “Santa Monica Pier Rats.” 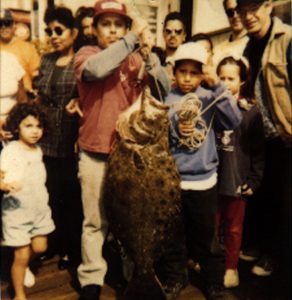 More common than halibut are white croaker (tom cod), queenfish (herring), walleye surfperch, scorpionfish (sculpin), kelp and sand bass, Pacific mackerel, Jack mackerel (Spanish mackerel), and bonito. Occasionally, barracuda, white seabass and even yellowtail will show up, most often out at the end of the pier in deeper water. The most common method used for the mackerel is to fish a light line with little or no weight and a single hook baited with a small strip of squid or a piece of mackerel. This of course works best on the areas nearest to the water so get down by the water. The bonito are generally taken on live bait or bubbles with a feather. 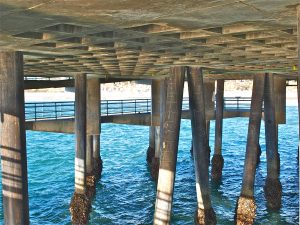 My favorite place to fish!

During the winter and spring, try around the pilings or fish under the pier (it’s possible because of the way the lower level platforms on the pier are designed) with bloodworms, mussels or sidewinder crabs (called “long arms” by some). The result might be a few pileperch, rubberlip perch or black seaperch. In addition, an occasional cabezon, bass or rockfish my show up when fishing at the bottom of the pilings. Fishing at night, especially during the winter months, may yield California scorpionfish aka sculpins. Smaller walleye surfperch are fairly common year round (although regulars report the best bite is from November to March). Most walleyes are caught on small pieces of anchovy fished mid-depth from the mid-section of the pier to the end. 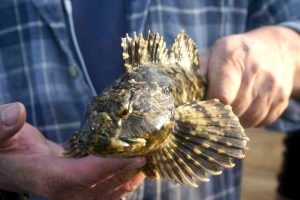 Increasingly however, anglers are also using artificial lures for the walleye. Sabiki and Lucky Lura-type bait leaders with size 8 or 6 hooks can be deadly and will also catch queenfish and other small fish. A few truly knowledgeable anglers also use crappie jigs. 1/64-ounce size jigs with mini skirts in chartreuse, hot pink, white, clear or root beer colors seem to do the trick. Remember, when using the jigs, a slow retrieve works best. (On an April visit in 2002, I fished the waters under the pier using three bare, size 6 hooks with a slow retrieve. The result was 58 fish—queenfish, jacksmelt, Pacific sardine and walleye surfperch in just over an hour. Non-stop action without using any bait. Although I tried some of the queenfish as live bait for a halibut, the only fish I got that day were the small variety.) 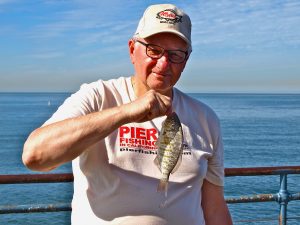 Inshore, use fresh mussels, bloodworms, soft-shelled sand crabs or ghost shrimp for barred surfperch, yellowfin croaker and an occasional spotfin croaker or corbina. Corbina up to six pounds are caught, mostly while using light tackle (6-8 pound line), size 4-2 hooks, and soft shelled sand crabs—the bigger the crab the better. The spotfins by the way can be large. The pier saw a fairly long run of spotfins during March of 2007 with anglers catching limits of fish up to and exceeding five pounds (with most being landed on ghost shrimp).

A trick used by some locals for the larger barred surfperch (up to 3 pounds) is to use a fresh mussel still in its shells. The shell is opened and then three size 8 hooks are put into the soft meat and the rind.

This same rigging can be used on the larger pileperch, rubberlip perch, and black seaperch (buttermouth) further out on the pier. A favorite technique used by locals fishing under the pier for the large pileperch, a fish that likes to circle the pilings just a couple of feet below the surface, is to use a light line, a bobber, a split-shot sinker, and a live sidewinder crab that they’ve caught from the inshore pilings. 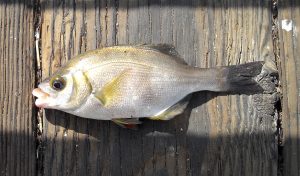 A number of opaleye, zebraperch and sargo are also caught. The opaleye (up to 5-6 pounds) and zebraperch prefer green moss but will also hit on frozen peas and fresh mussel. The sargo prefer soft shell sand crabs and fresh mussel. Most of these are caught in the mid-pier section of the pier out to the end, most are caught down around the pilings, and all seem to prefer the evening hours. A sargo, by the way, weighing 3.5 pound won the annual Father’s Day Tournament several years ago.