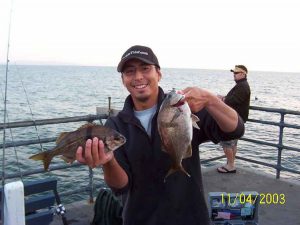 Quite a few sharks and rays are also caught on the pier; in fact, it is a pretty sizable fishery in the evening hours. The favored shark is a thresher shark. Most are caught out at the end of the pier but mid-pier to the end, on the south side, will see rods lined up for the sharks. Typical tackle is a sliding live bait leader with a 6/0 to 8/0 hooks and 120 pound steel leader. The line is cast out and then a live Pacific or Spanish mackerel is slid down to the water to await the sharks. This was a common technique using live anchovies back in the sixties but a technique rarely seen on piers today. 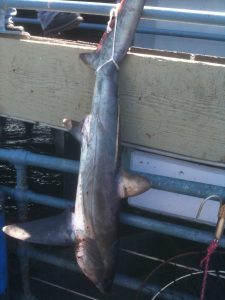 Species of sharks include soupfin sharks (a 5 ½ footer was taken in September 2007), leopard sharks (to 50 pounds), gray smoothhound sharks, horn sharks, thresher sharks and even blue sharks. I’ve heard stories of hammerheads and bonito sharks (shortfin mako, Isurus oxyrinchus), but I want to see the pictures. A run of thresher sharks took place in October 2007 that saw many sharks landed and though most averaged 40-60 pounds one was estimated by all concerned to be over 100 pounds. Reported catches have also included a sevengill shark (Notorynchus maculatus) that weighed an estimated 185 pounds (1996), a soupfin shark weighing an estimated 90 pounds, and an angel shark estimated to weigh 40-50 pounds (2000). On the wall of the pier bait and tackle shop is a picture of a 230-pound sevengill shark landed near, but not on, the pier in June of 1995. 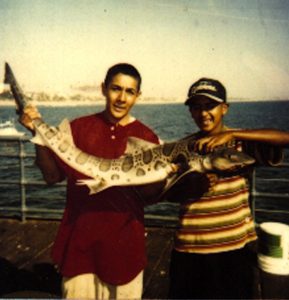 Together with the sharks will be a number of rays, especially bat rays and many big old mama bat rays near to or exceeding a hundred pounds in weight have been landed (including an estimated 150-pounder in May of 2002). May 2008 saw a run of BIG bat rays hooked, fish estimated at over 150 pounds in weight. In several cases they simply spooled the veteran anglers who were fishing for them. 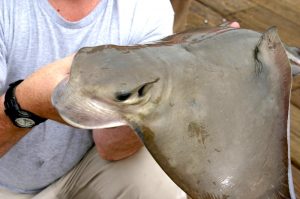 Joining the bat rays will be shovelnose sharks (guitarfish) and the smaller thornback rays. 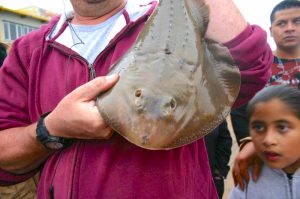 It’s also a notable locale for poachers, especially those seeking out the lobsters aka bugs. Although there are strict season, size and method of capture regulations on the bugs none seem to be followed by many locales. If a undersized lobster is snagged on a fishing line (instead of taken in a hoop) out of season many will still keep them. Then there are the guys who come armed with heavy rods and reels and big treble hooks. As soon as it’s dark and there is a little more privacy they may be out there trying to snag Mr. and Mrs. Lobster. Occasionally there are sting operations on the pier to thwart the poachers but there are never enough to stop the poaching.

As for the crabs there are rarely enough caught to go over the limit although it does happen occasionally. Most are caught in hoop nets but once again some of the creatures, especially the spider crabs, like to grab a bait and rarely do they want to let it go. What you thought was a big “something” (since there is little fight) become an ugly-looking crab that can be covered in all kinds odd detritus. But, they are good eating (even if a little difficult to clean). 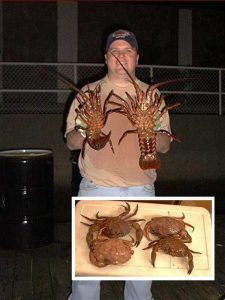 Adam Cassidy with lobsters and crabs 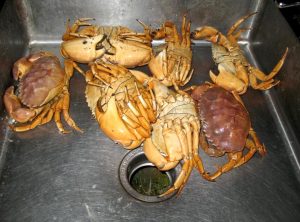 <*}}}}}}}}}>< — New friends, conversation and interesting stories are bonuses when I visit California’s piers. One such story was provided by an angler sharing the rail at the Elephant Rock Pier in Tiburon, up in San Francisco Bay. He had grown up in Santa Monica and related how, as a teenager, he would go out at night to the Santa Monica Pier to go fishing. According to him, there were a number of Chinese fishermen who made a regular habit of snagging crabs with large treble hooks. Not much of a story there except that they evidently kept a fire going under a large pot filled with seawater. As they caught a crab it went into the pot and an ongoing communal sort of crab feast was the result. He said he would sneak a bottle of wine from his parent’s larder and he and the Chinamen (his words) would fish and feast (a.k.a. party) most of the night. This was supposed to have occurred back in the ‘60s. Today you would probably need to bring some crusty sourdough bread, the proper cheese, and a good Cabernet if you wanted to do it right (although a proletarian Zinfandel seems more appropriate for a pier)!

<*}}}}}}}}}>< — Another story concerning crabs at the pier was sent into PFIC by Neil E. Dixon — Why were there so many crabs under the Santa Monica Pier?

In the early 1960s my family moved close enough to the Santa Monica Pier that I could walk the two miles to the pier in about half an hour. I spent many summer days fishing and trying to hustle enough money to pay for a ticket on the ½ day boat Kiaora with Capt. Curt or a full day trip on the Indiana with Capt. Bill Pelton. One summer day in the 1960’s, on the lower deck of the Santa Monica Pier, people were catching more rock crabs than usual. Several of us “pier rats” got our hoop nets over the side and started to bring up lots of rock crabs.
We started selling our crabs to pier visitors for 25 cents each. We had to dig in trashcans for bags and boxes so that the tourists could carry their crabs’ home for the traditional crab boil. The abundance of the crabs on the lower deck of the pier went on for days and many of us “pier rats” amassed over $20 each selling the rock crabs. At the end of the week income came to an abrupt end early one evening when someone with a grappling hook and a strong rope hauled up what had sent the hundreds of rock crabs to feast under the pier. The heavy tug of the grappling hook on the rope revealed a horrible sight. On the surface of the water, suspended by the grappling hook, was a pale-faced man with long red hair and a large spider tattoo on his hairy chest. His chest was criss-crossed by a length of chain and two cinder blocks were attached on each side of his body. The crab feast ended when the Santa Monica Police and the Los Angeles Coroner sent this man to his final last resting place—which was not under the Santa Monica Pier.

<*}}}}}}}}}>< — In 2013 the pier was named one of the top ten piers in the nation by Coastal Living Magazine. It commented: “Southern California leads the country in cool piers. Most started as cargo/passenger terminals. The coastline provides few close-to-shore anchorages, so shippers built their own. From its start in 1916, the Santa Monica Pier has never bothered with practicality. It’s all about fun: an arcade, an amusement park, an aquarium, shops, restaurants, and a 1922-vintage carousel.” Other California piers making the list were Crystal Pier in San Diego, the Santa Cruz Wharf, and Pier 7 in San Francisco. Non-California piers were: Chelsea Piers, New York, New York, Morey’s Piers, Wildwoods, New Jersey, Ocean City Pier, Ocean City, Maryland, Cocoa Beach Pier, Cocoa Beach, Florida, The Pier, St. Petersburg, Florida, and the Bell Street Pier, Seattle, Washington. My list might have been a little different but it’s still quite an honor to be named one of the top ten piers in the nation.

<*}}}}}}}}}>< — Most piers, sooner or later, will have a super run of fish that will be forever etched in the minds of local anglers. Santa Monica, because of its location and size has had several of these. The most famous took place back in 1957 (some sources say 1959) when the waters around the pier were invaded by schools of marauding white seabass. They were in the deep waters of the pier, the mid-pier areas and even the surf. More important, they seemed to hit almost any bait or lure (although the regulars, who would snag a sardine and lower it to the water using a live bait leader, had the best success). Early morning and evening were the best times but fish hit all day. One single afternoon saw 200 of the fifteen to forty-two pound fish landed, and the run lasted for nearly two weeks. To put it mildly, Santa Monica Pier was humming, and jammed with anglers seeking the prize fish.

That same El Niño year saw barracuda swarm into local waters. Pier fishermen and surf casters had an easy time limiting out on the normally deeper-water fish. The local tackle shop also had a run, a run on every type of lure that might attract the toothy invaders. Legend has it that one exasperated angler, unable to buy a lure, made his own out of a beer can opener and had to give away his over-the-limit fish. As in the case of the white seabass, the pier was jammed and the tackle shop owner was whistling a happy ($) tune.

A louvar (Luxarus imperialis) was also seen in those warm waters. The fish, an uncommon mesopelagic species usually seen out in deeper waters, was taken in the surf in October 1959.

The warm-water El Niño year of 1997 saw several unusual fish landed at the pier but the most improbable was a 25-pound beak-nosed king salmon that had apparently lost its way from its normal cold-water home. It seems the fish would have moved farther north for colder water instead of heading into the increasingly warm waters to the south.

That year also saw several triggerfish caught at the pier but it isn’t clear that their presence was due to the El Niño conditions. Quite a few of the triggerfish, an exotic species that is more common to the warm waters of Baja, have been taken from the pier (even in non-El Niño years) and it’s speculated that there is a local population that has settled into the rocky remains of the jetty that sits out from the pier. The triggerfish are probably finescale triggerfish (Balistes polylepis), and only a few dozen have ever even been reported from California. This pier, and the Redondo piers, may be the best places to chance a catch of the seldom-seen fish.

Rare and unusual fish do show up even in non-El Niño years. One of most unusual catches was two kelp greenling that were taken from the pier on March 19, 1953. The bait that was used was mussels and it was the first recorded record of the fish south of Point Conception.

Another long-ways-from-home fish was a two-foot-long American shad taken in August of 2006. More common to streams in the Sacramento Valley, the fish was identified by the aquarium under the pier.

A somewhat perplexing story about the pier was told to me by “D,” one of the main men at the pier’s bait shop. The story concerned the occasional instances of red tide at the pier. This particular time (I think it was in ’98 or ’99) the red tide lasted almost three months and, of course, really put a crimp in the fishing. What was interesting was the good fishing immediately following the red tide. Seems “D” had a commercial license at the time and he would fish when he wasn’t working at the shop. He had great success after the red tide—culminating in a one-day catch of 208 opaleye perch and sargo. Putting the ethics of catching so many fish aside for the moment (it was, after all, a commercial catch), it challenges some assumptions about red tide. If local organisms had been killed during the red tide, why would the fish return with such a vengeance? What food was available to attract them back to the pier in such numbers? Did the red tide not affect the mussels and other creatures on the pilings?