The first time I visited this pier was in 1982; the pier was crowded, live bait was available, and anglers were catching yellowtail. That fact may seem trivial or insignificant to the uninformed, but it seemed pretty amazing to me. Yellowtail are one of the most prized sportfish in southern California and are commonly caught out on the party boats. They are far less common on piers. In fact, they are relatively rare to most piers. However, several of the muscular fish were on the deck of the pier that day. Later, I found out that more than 200 yellowtail were caught on the pier that year, most between July and September. One of the regulars, a true “Hermosa Pier Rat,” had landed 33 of the prized fish himself; his “best” day had seen him land seven small yellowtail in the 7-10 pound range together with a 14-pound white seabass. 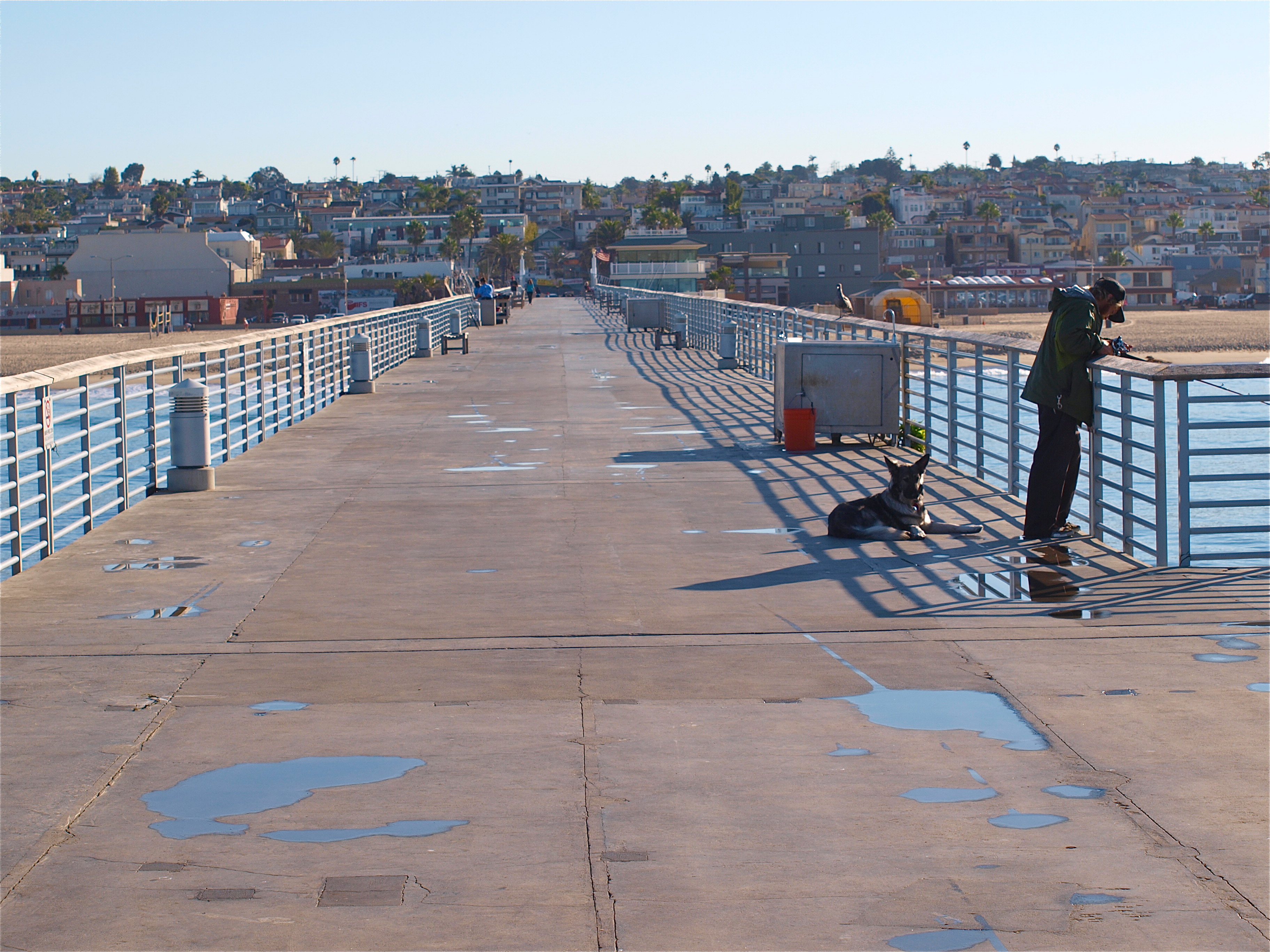 In addition, several hundred “keeper” halibut and many large white seabass were also landed that year. When these “large” gamefish were mixed in with the more common pier varieties, it indicated quality, quantity, and diversity rarely seen on most piers. It also meant that this pier was worthy of being included among the best in the state. 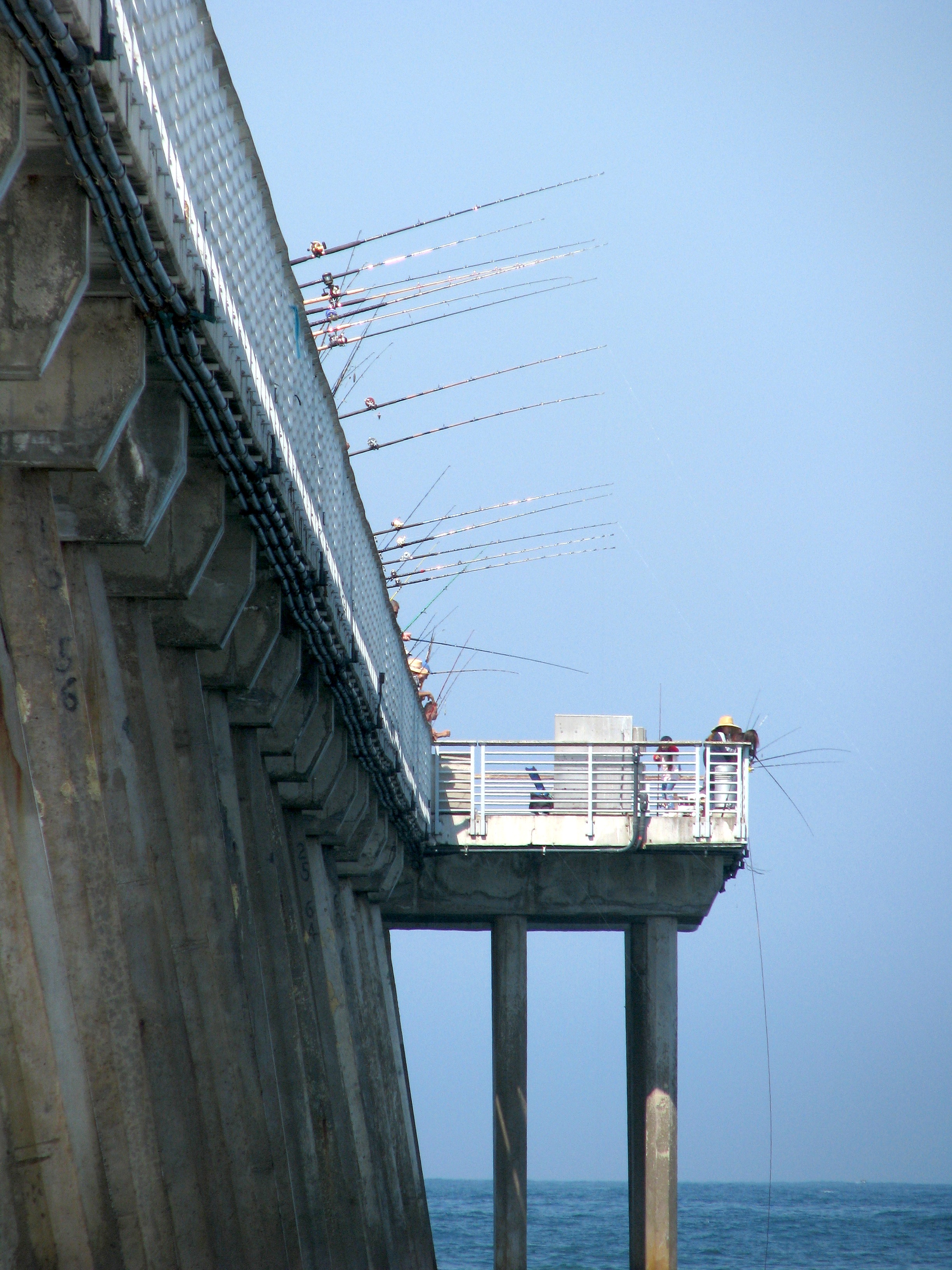 The only question in my mind was if the results reflected a fairly typical year? My visits since then have given an answer to the question, to wit, a resounding no. The ’82-83 season was during an El Niño period and the warm water in those years undoubtedly had a lot to do with the larger game fish showing up at the pier. No year since has seen the yellowtail or white seabass seen during those years and the number of halibut, especially legal-size halibut has taken a nose dive. Not every visit sees great or even good fishing. Nevertheless, most years seem to yield quite a few fish decent-sized fish and the pier remains one of the best in the southland area. 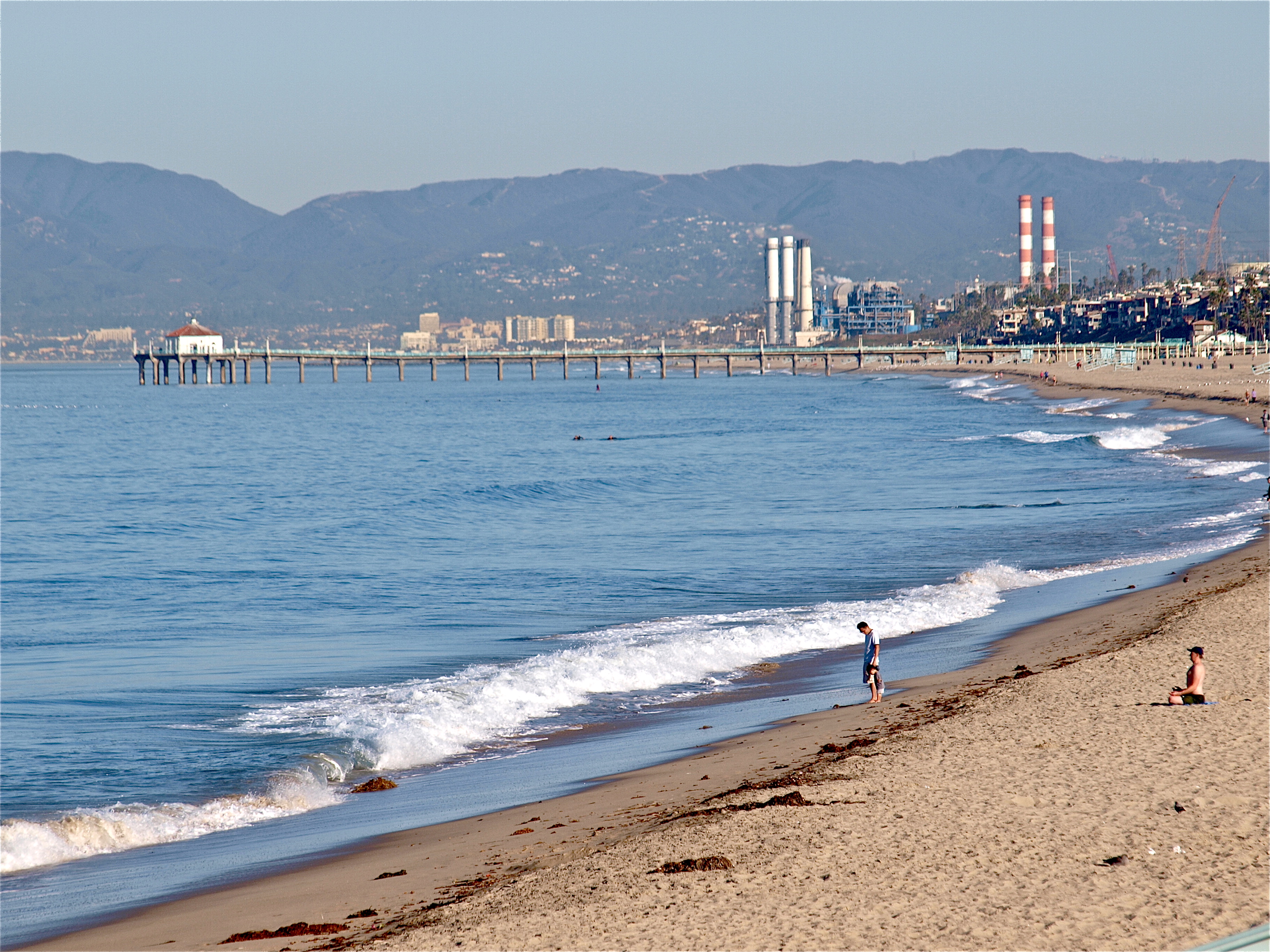 Environment and Fish. The pier itself is relatively small, only 1,140-foot-long (although one source says 1,228 feet and another says 1,168 feet), 20 feet wide, and it has a 50-by-58-foot platform at the end. The bottom is primarily sand, and pilings have a heavy growth of mussels. There is often kelp and seaweed near the end of the pier by late summer. In addition, an artificial 3,000-ton quarry rock reef surrounds the last 650 feet of the pier, approximately 65 feet from the edge of the pier. The sandy beach provides good surf action and the reef acts as an attractant for both additional species and larger fish further out on the pier. 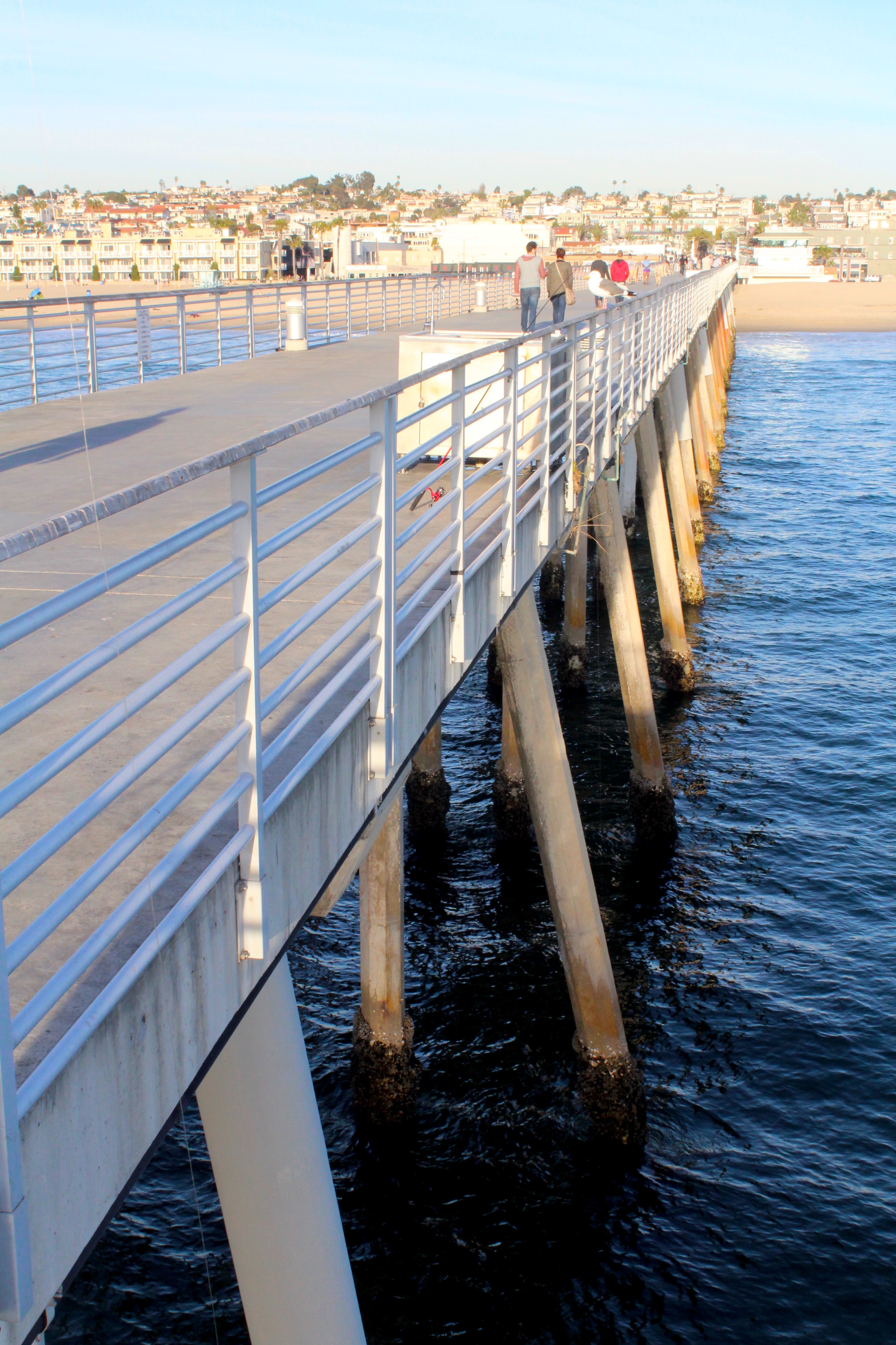 Mid-pier areas yield a variety of fish including queenfish (herring), white croaker (tomcod), jacksmelt, walleye surfperch, silver surfperch, pileperch, black seaperch, salema (I think it’s one of the better piers in California for these), and halibut. Most years will also see a run of zebraperch during the spring, a fish that is fairly rare to local piers. 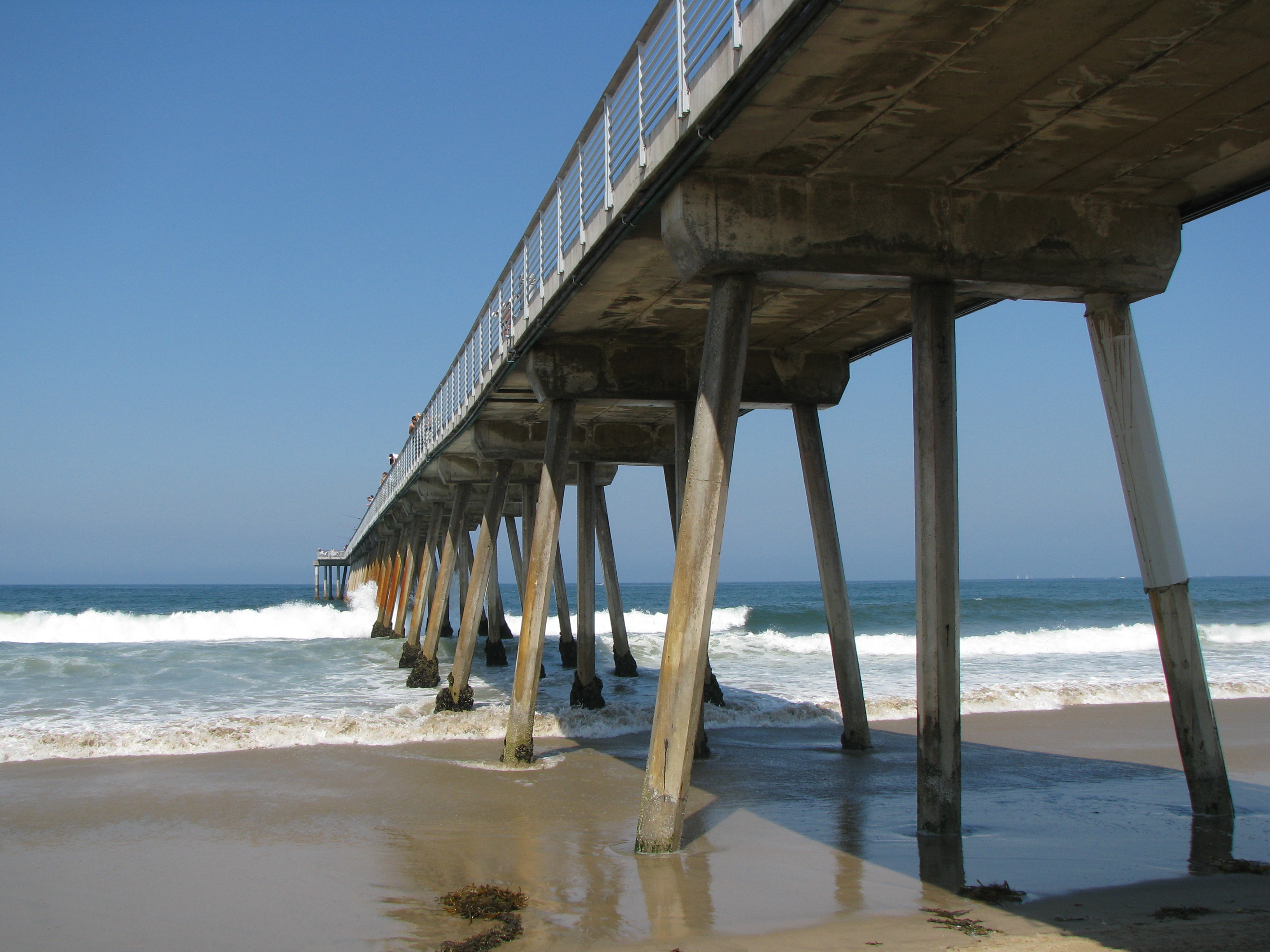 The last half of the pier will see even more variety. Large game fish include bonito, yellowtail, white seabass (including a 36-inch fish in June of ’08) and California halibut (including a 39-inch fish in August of ’08), the main goal for many anglers.

Casting out toward the reef can produce a plethora of species — bass, shallow-water rockfish, sheephead and the smaller rock-loving denizens such as kelpfish. 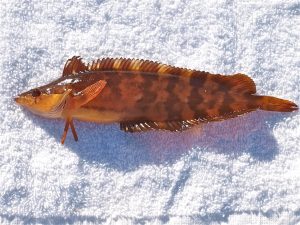 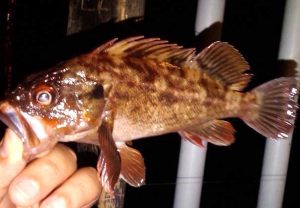 Sharks and rays are also a possibility. Thornback rays, shovelnose guitarfish, and bat rays are common most of the year while, in late summer and fall, a few thresher sharks should make a showing (although there have also been some good spring-time runs). A 99-inch thresher was taken in October of ’09, a fish that anglers estimated to weigh close to 200 pounds. Occasionally an angler will hook a blue shark, spiny dogfish, angel shark or a soupfin shark and a 200-pound great white shark was illegally taken in 2003. I have seen a picture of a 140-pound bat ray taken at the pier as well as a fish estimated to weigh 200+ pounds that was caught by PFIC regular Mola Joe back in the ‘80s. A hammerhead shark weighing about 175-pounds was also reported. 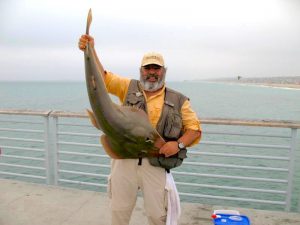 Mahigeer and a shovelnose shark (guitarfish)

Unusual catches reported on the PFIC Message Board have included an ocean whitefish in October 2000, a salmon in January of 2002, a needlefish in June 2002, and a 30-inch or so spotted snake eel (Ophichthus triserialis) in April of 2007. Amazingly, several small bluefin tuna were hooked during the El Niño years in the ‘80s.

Perhaps the rarest catch from the pier was one reported by Mola Joe (see his posts below). The fish was a popeye catalufa (Pseudopriacanthus serrula), a deepwater fish more common to Baja waters. It was caught in the early ’70s and a picture of it hung in the pier’s bait shop for a number of years. As Joe said, it “must of been way lost.”

Another fish rare to the area but one taken on the beach, not on the pier, was highlighted in an article in 1932.

Hermosa Beach, Jan. 8.—The globefish of the family Diodon is seldom observed by anglers on this coast as its natural habitat is in the tropics, but unusual marine visitors sometimes reach the shores of Southern California and one of the queer fish appeared on the beach here today. The little fish which likes to live in water sixty fathoms deep has for its principal protection the faculty of inflating itself to the size of a football. This is done by means of injecting air into skin tissue whereupon the globefish immediately leaves the point of attack and ascends to the surface, only to run into another hazard, that of the gulls and other sea fowl, possibly accounting for the expression “poor fish.” Aside from the ascending possibilities after inflation, when the little fish has taken on sufficient air it causes countless quills all over its body to extend outward, thereby offering additional means of protection, much after the fashion of porcupine.

It’s hard to say what the fish actually was. Three members of the Porcupinefishes: Family Diodontidae, are recorded from California— the Pacific Burrfish, Ballonfish, and Spotted Porcupinefish. Close cousins of  Pufferfish, they too should not be eaten since the flesh can be poisonous. 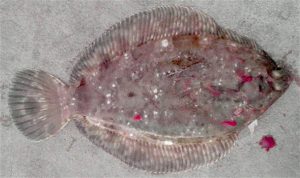 Crustaceans. Hermosa has traditionally been an excellent pier for California lobster and regulars with the “know-how” regularly took their limits during the lobster season. Unfortunately, too many people also keep illegal lobsters out of season and under-sized lobsters in season. The result: a drop off in lobster catch in recent years. Hopefully there will be a return in numbers but it will probably not happen unless the DF&G is willing to step up enforcement of the rules and people are willing to cooperate—from understanding or fear—with those rules. A lot of spider crabs are also taken although few people actually seek out the ugly creatures. 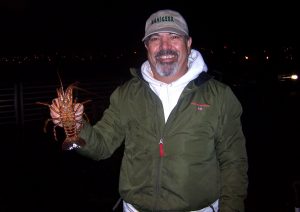 An under-sized spiny lobster caught by Mahigeer; it was safely returned to the water to grow and be caught another day

Fishing Tips. For inshore fishing, the best months are winter to early spring for large barred surfperch, and summer to fall months for croaker. For all of these, the preferred bait is live sand crabs followed by ghost shrimp, bloodworms, fresh mussels, or clams. Most often used is a high/low leader utilizing size 6 or 4 hooks, and a pyramid sinker just heavy enough to hold the line in place. Increasingly, many anglers fish for the big barred surfperch with plastic grubs and while generic, 2” clear, red flake grubs or root beer colored grubs are favored by many of the regulars, an increasing contingent also swears by the Berkley Gulp. Both will work if you use them properly. 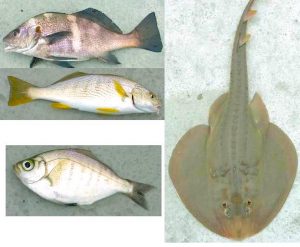 Although the barred surfperch will hit at almost any hour, late afternoon to after dark seems the best times for the yellowfin croaker, spotfin croaker, China croaker (black croaker), and corbina. An unfortunate local practice, one that is far too common throughout many areas of southern California, is snagging corbina with big treble hooks. Some local groups are working to outlaw the practice but the anglers (poachers in my opinion) continue to show their disdain for ethical angling by their continued usage of what should be an outlawed practice. 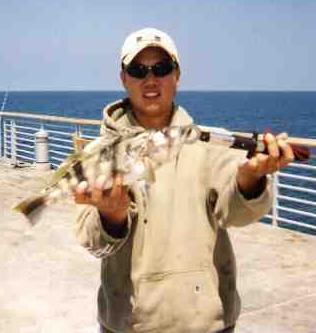 In the mid-pier area many people also use the high/low leaders although the quarry now becomes tomcod (white croaker), bass, and croaker that have wandered away from the surf area. Bait rigs are also common, especially Sabiki riggings, and they will latch onto queenfish, topsmelt, jacksmelt, sardines and mackerel. Many anglers also fish for perch (rubberlip, black, white and pile) as well as opaleye down around the pilings using bloodworms, mussels, or small pieces of shrimp. Lots of salema are also present and for these, a small strip of squid about 2-3 inches long, fished on a size 6-8 hook, at mid-depth levels should produce fish. 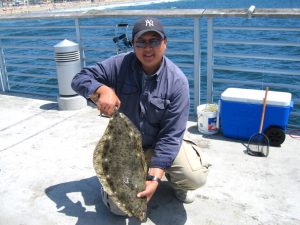 This mid-pier area, especially late spring to summer, is also a good best spot for California halibut. Use a live bait leader baited with live anchovies, queenfish, smelt, shinerperch or baby macs that you’ve been able to net or get with a bait rig. Live bait produces almost all of the legal sized halibut although a few also fall to lures like Big Hammers and Fish Traps.

The horseshoe shaped reef that surrounds the end (actually about half of the pier) does produce some of the best fishing. Regulars say there is a break in the reef on the right side of the pier about three quarters of the way out, just before the wider end section of the pier. Regulars believe the fish funnel in through that gap and that’s why that spot is given the name “halibut alley.” Many additional species also show up in the “alley.” 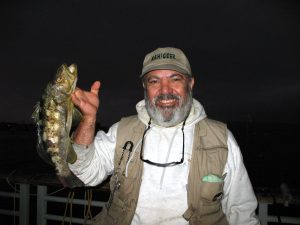 A cast on the left side of the pier opposite “halibut alley” has also often been good for me. For many of the reef species, including fish such as calicos (kelp bass), perch, an occasional rockfish, salema, kelpfish, and others, a decent cast is required (the reef is approximately 65 feet from the pier) but well worth the effort. Also remember that if you are specifically seeking out reef species such as perch use bloodworms or mussels (probably ones you have toughened). 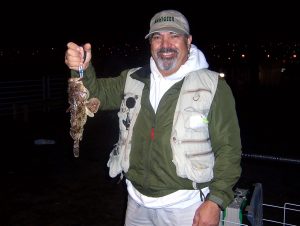 At the very end of the pier, much of the angling focuses on the pelagic species—Pacific mackerel, jack mackerel and bonito, although warm water months, as mentioned, may also see a few yellowtail, barracuda and white seabass. Many anglers here use Sabiki-type bait rigs to capture small baitfish—sardines, baby mackerel, smelt, keep them in a bait tank of some type, and then use the baitfish on top for the bigger game fish, on the bottom for halibut. 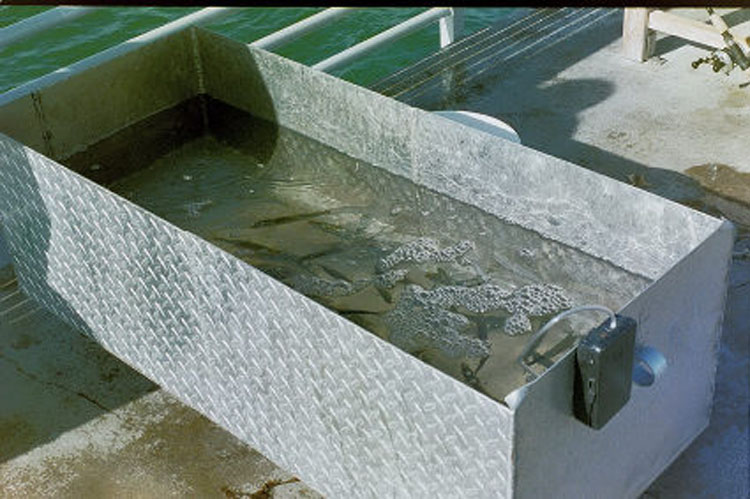 A large “live bait tank,” one of the best I have seen on a pier. As Ted would say, “Excellent!”

Many times though the main action is just the Pacific mackerel. If the mackerel are in a biting mood, anglers will cast out a 6-hook Sabiki and get fish on nearly every hook. If on a “light” bite, the macs may be tempted by the use of a single strip of squid on a hook together with a split shot sinker.  Most bonito fall to a cast-a bubble along with a bonito feather although when it’s windy you might want to try a feather trailing behind a golf ball. Lures such as MegaBaits, Krocodiles, and even Buzz Bombs will also often yield fish.