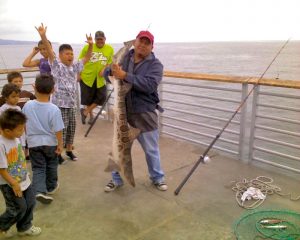 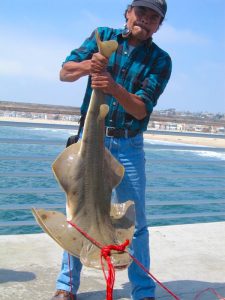 A number of regulars fish for sharays from the pier. The most valued seem to be leopard sharks and thresher sharks although any big shark or ray is highly respected (and an angler in September of ’98 landed a 6-foot-long, 50+pound soupfin shark). Thus a large shovelnose guitarfish, bat ray, or blue shark will also win points for the angler. 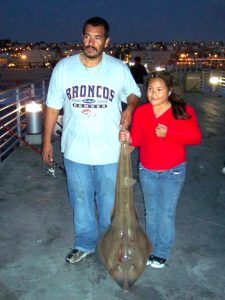 Still, the threshers seem to be the special prize and fish approaching (and sometimes exceeding) 100 pounds are caught each year. Typical tackle  is usually fairly heavy line, hooks in the 4/0-6/0 range, and steel leaders. The best bait? Lively jack mackerel or Pacific mackerel lead the list of baits. 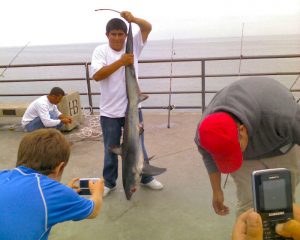 Thresher shark (but basically a baby)

Although the pier is better known for lobsters, a few crabs are also take during the year. Most of the crabs are either yellow rock crabs or spider (sheep) crabs. 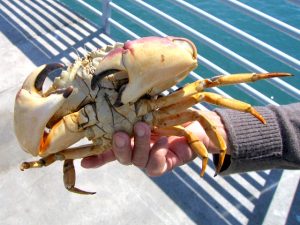 Special Tip. As mentioned, the pier regulars know how to pursue the “large” gamefish. When small-sized Spanish mackerel (jack mackerel) or greenbacks (Pacific mackerel) are available, the regulars will use a bait rig to catch them for bait. Then, a long cast is made with the main line, as close to the near-by reef as possible. Next, a sliding leader baited with the mackerel is slid down the line toward the reef. If large fish are present, this is often the preferred method. Large anchovies, smelt, small queenfish, butterfish and shinerperch are also used but they do not work as well for bait. The hoped for results are keeper-size white seabass, yellowtail or halibut but the anglers will gladly take home large calicos (kelp bass) or the above-mentioned sharks and rays.

Hey everyone, I usually just read the board and hardly post, so just need some pointers. I know Mola is the pro with tons of experience and might be able to help me out, or Frechy too cuz I also know you guys fish Hermosa. Well, I was out there on Mon. morning fishing north of the pier with a buddy for the first time in the surf. We didn’t know what to target so we threw out 3″ motor oil grubs on darterheads for nothing for the first hour.

Then we saw about 5 others surf fishing to see what they were up to and they were fishing for corbina w/sandcrabs, so we went to go dig some up. Saw one guy pull in a nice corb. and another gentleman with his wife pull in easily more than 5 in my face. I saw many corbina cruising but have no clue how to fish for them or whatever else is out there.

Me and a buddy got one tiny surf perch a piece, not bad for the first outing i guess. But we wanted corbina or some bigger gamefish. Any tips for surf fishing would be appreciated, I’m new and love it already. My outfit was only a 6’6 rod with a Daiwa spinning loaded with 6-lb. Just wondering if this is suitable, and other tackle I should get. I used a 1/2 ounce Carolina rig w/ a #4 hook for the crabs which got me the perch, and i also threw out a perch power grub for nothing. If you pros out there can give me the detailed tips on how to get on some Perch, corbina, halibut, and whatever else I can catch out there. Also, how do the bites feel because it’s kinda hard for the first time fishing the waves and trying to feel for bites. Please let me know how far to cast, what to look for, productive baits, and some methods u guys use. Thanx ahead of time, I appreciate all the help you can give. Btw, this board is the best one with all the great people and all the reports and replies. Thank you guys!

Keep your lines WET!!!! For perch, corbina, and yellowfin croakers use a Carolina rig for bait and plastics. I like to use a 1/2 ounce egg sinker with an 18″ leader. use 1-2″ plastic grubs. If you get sand crabs I use a #4 or #6 baitholder hook. Match the crab size up with the hook. The “soft shell” crabs work the best. They are the sand crabs that have molted off their hard shell. You don’t have to cast out far for corbina. Stay out of the water because you will spook them. Cast anywhere from a couple of feet to a few yards out. Look for corbina cruising in the shallow water feeding on crabs. You can sometimes see their back sticking out of the water they are so shallow. Pieces of mussels will work for corbina also if you cant get any crabs, same set-up.

For halibut use 3-4″ plastic grubs on a 1/2 ounce leadhead. I like jigheads with eyes. Smelly jelly or calico cocktail will improve your odds with the plastics. You can also try anchovies live or frozen if you want to bait fish. Other species you can catch close to shore: Grey smoothhound shark,

Shovelnose Guitarfish, Leopard Sharks, Bat Rays can be caught with a hi-lo rig. I use about 3 ounces of weight, and at least a 1/0 hook. Any cut bait will work. Squid, anchovy, and mackerel work well. Cast out past the breakers, or as far as you can. Try close in also.  Good Luck! Andrew

Well rest assured that you are using the correct rig. When I fish for Corbina I use a Carolina rig with a 1/2-3/4 ounce weight, and a #6 Octopus hook. This hook hides much better than bait holders when you load it up with softshell sand crabs, Softshells are key. I also use a 4′ flourocarbon leader like P-line or Seaguar. The flourocarbon does make a difference!

As for the bite, a corbina bite is hard to detect in the surf, it doesn’t hit like a perch does with a tap tap bam! It will just suck up your bait and continue slowly down the beach looking for it’s next little snack. So you have to be able to distinguish the difference between a wave pulling and a fat corbina that just sucked in your bait.

As for your rod, that is exactly what I started with, and it will catch fish. I do use a 9′ fast action steelhead rod now, but only because it will help catch more fish. But your rod is not a problem and 6# IS perfect.

Try to get or make a sand crab trap. There have been a lot of postings about making your own, I don’t know how they perform, but you can get one for $50 around the LA area. Believe me, I used to think heck I can dig them up. But it is hard to find the softshell without a trap, it is a way to get free bait and takes a lot less time, so you are in the water quicker and longer. The last bit of advice, have confidence and watch your rod like a hawk! Know you are going to catch a fish and every cast gives you the opportunity to catch one.

Now that you have gotten all the advice, comes the important stuff. Please try and release these fish, at the bare minimum right now, because they are spawning and we need to protect the future of the corbina fishery. As Mola Joe said, right now at this very moment is the best time to get some of those larger fish, which happen to be spawning females. Catch them measure them, even weigh them, but try and get them back in the water as quickly as possible and make sure they kick off strong. Adam, I fish with my feet on the ground…

All of the above info looks great…. I get out to Hermosa a few times a week and it really comes and goes. Some days a dozen perch and maybe a Corbina or Halibut. Other days… Zilch.! One thing I didn’t see mentioned is the tides. I prefer to fish about an hour prior to and 2 hours after the high. Good fishing can be made on the low tides, but you have to read the water better to look where it is actually moving, and where the pockets are. It pays to scout the beach at a really low tide and see where the bigger holes are, then go back for the high later that day. The main thing to remember (tackle suggestions aside) is to get out there. Spending the time doing it WILL pay off. Good luck. Looking forward to a report from you in the near future. DesertAngler

TripleH, all of the above advice is very good! Calfishing.com has an article about “Catching Corbina From The Surf” that has really helped me! Dime sized softshell sandcrabs with roe work best, use small hooks (size 6,8,10), and try to stand on dry sand to avoid spooking the fish. Normally with corbina, you wont even feel the bite (unlike the “tap-tap-strike” perch bite), but line will be peeling off your reel as the fish tries to head towards Catalina! Be careful, this type of fishing is addictive…good luck!

Seems like most of the bases were already covered here. I would just add how important it is to get the right bait. Bloodworms, clams, ghost shrimp, and mussel will catch corbina, but nothing works for big corbina like softshell. Spend the time to get the bait. Some mornings and evenings when softshell are hard to get (seems like most days)I’ll spend as much time getting bait as I do fishing. I think it’s the single most important thing when it comes to consistently catching quality corbina, and it’s the main reason so few anglers are successful when it comes to catching larger fish. First get your bait, then worry about trying to catch the fish. I’ve said it many times. Buy a sand crab trap. It’s the first step in trying to catch corbina. You can’t count on softshell being abundant enough to dig with your hands on most trips. For two or three weeks each year they are, but all the other times you’re going to have to go through 50 crabs or more to get one soft. Tight lines and good luck!

Date: April 30, 2007; To: Pier Fishing In California Message Board; From: toejamb; Subject: More about the eel

No real measurements to speak of. That sucker was none to pleased about being on the pier and I wouldn’t have been able to put a measuring tape to him without killing him. I’d say he was close to 30 inches, give or take a few. One thing I will say was that it was very powerful for its size. When I was unhooking it, it bit down on my pliers and it took some doing to make it let go. Glad it wasn’t my finger. Fortunately, the hook came out, a few pics were taken and back into the water he went. 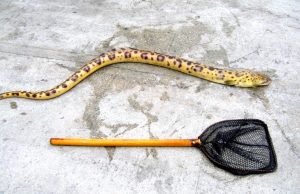 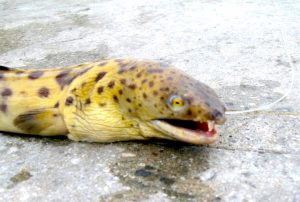 I believe the eel took a frozen anchovy. The guy who caught it was using a big old Penn conventional mounted on a jig stick with 80 pound test/30 pound leader. The guy and his buddies were wrapping up for the day and thought he’d been snagged on the bottom. After about 5 minutes of tugging and jerking up came the eel. 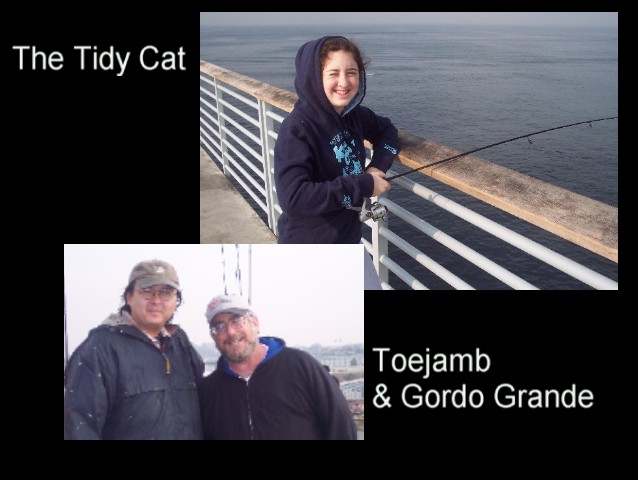 Some of our favorites — Gordo, Toejamb and Tidy Cat