This applies to the fishermen, too. “It’s not that they’re not trying to snag lobsters,’” Beckwith says. “They’re just not very good at it.’

History Note. The first local pier was built in the early 1870s in an area called the Shoo-Fly Landing. The pier was built as a loading point for asphaltum (tar) from the inland La Brea pits and of course the pier became the Shoo-Fly Pier. It was located just a few hundred yards south of today’s Municipal Pier.

In June of 1875 Santa Monica had a new port when the Shoo-Fly Pier was replaced on the same site by the 1,740-foot-long Los Angeles and Independence Railroad Wharf (also called the Santa Monica Wharf). On the bluff north of the pier the railroad built the Santa Monica Hotel. Soon steamers from San Francisco brought both passengers and cargo and the area was booming. By 1877 the area had a bathhouse and a beach pavilion and it was becoming a favorite of tourists from the Los Angeles area.

In February, trains of the Los Angeles & Independence Railroad began to leave Los Angeles at ten o’clock in the morning and five o’clock in the afternoon, and Santa Monica at eight and four o’clock, the Company deeming it a sufficient inducement to allow excursionists five or six hours to bath, fish, or picnic.

Although there was an initial business depression following the destruction of most of the wharf, the area rebounded with tourist business in the 1880s. In 1887 the elegant Arcadia Hotel opened. At the time it was built it was probably the finest resort type hotel on the coast. Among the hotels amenities (at least until the mid-1890s) was the now-shortened Santa Monica Wharf that set just a short distance north of the hotel. The wharf was used by guests and visitors. The wharf had become (by default) a pleasure pier.

On July 25, 1892, Southern Pacific began to drive piles for their “Long Wharf” located at the mouth of Potrero Canyon. The wharf extended out 4,720 feet and was both California’s longest oceanfront pier and the longest wooden pier in the world. 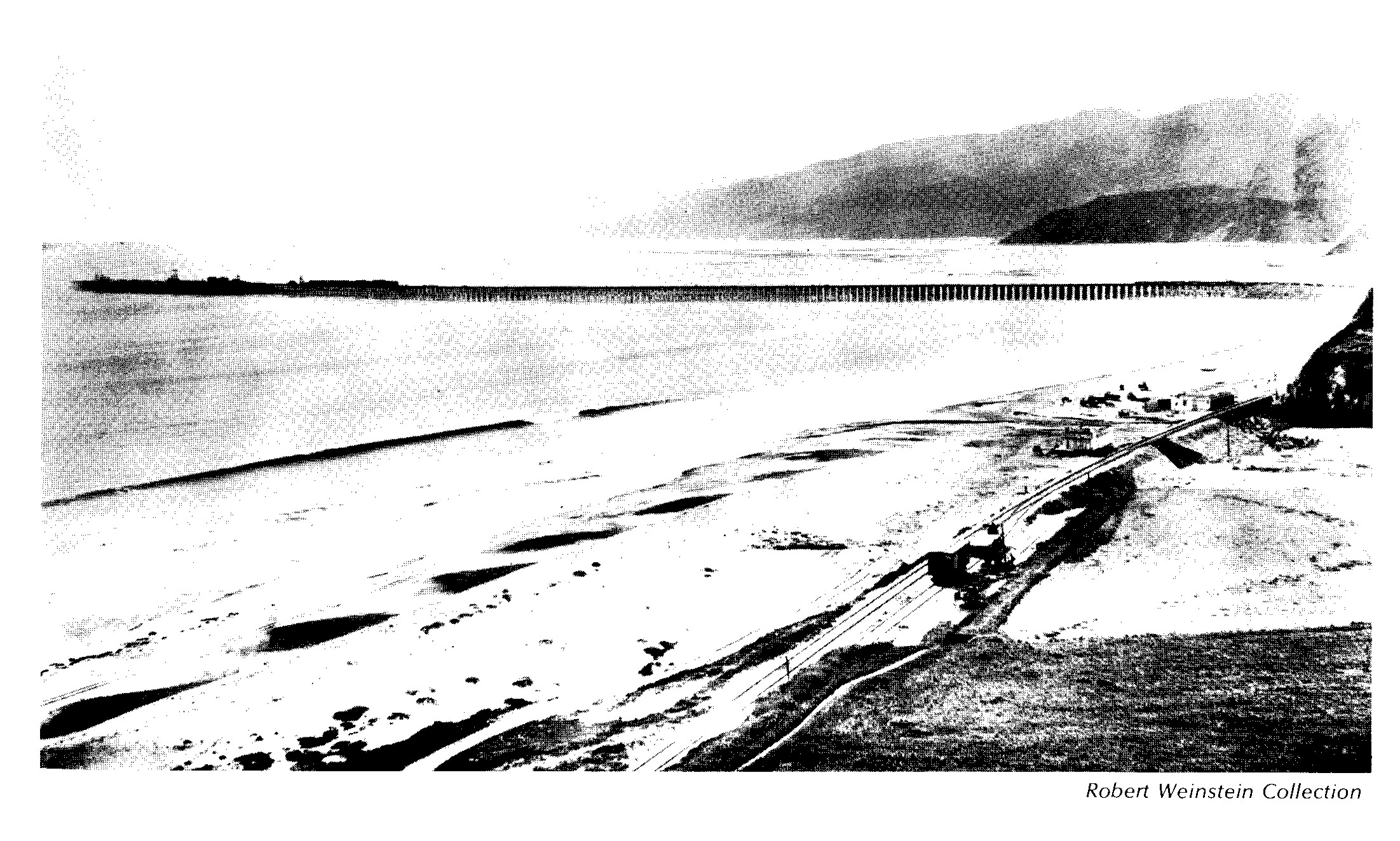 When the wharf began operations, on May 11, 1893, it became the “Port of Los Angeles” and was known by that name for many years. The nearly-mile-long pier was huge; it included two sets of railroad tracks (standard width and narrow gauge) that branched into seven tracks at the 130-foot-wide seaward end. The end included a warehouse, coal bunkers, depot and unloading facilities, a baggage room and a restaurant. Out toward the end, a stairway led down to a platform and boathouse reserved for anglers and sailors. 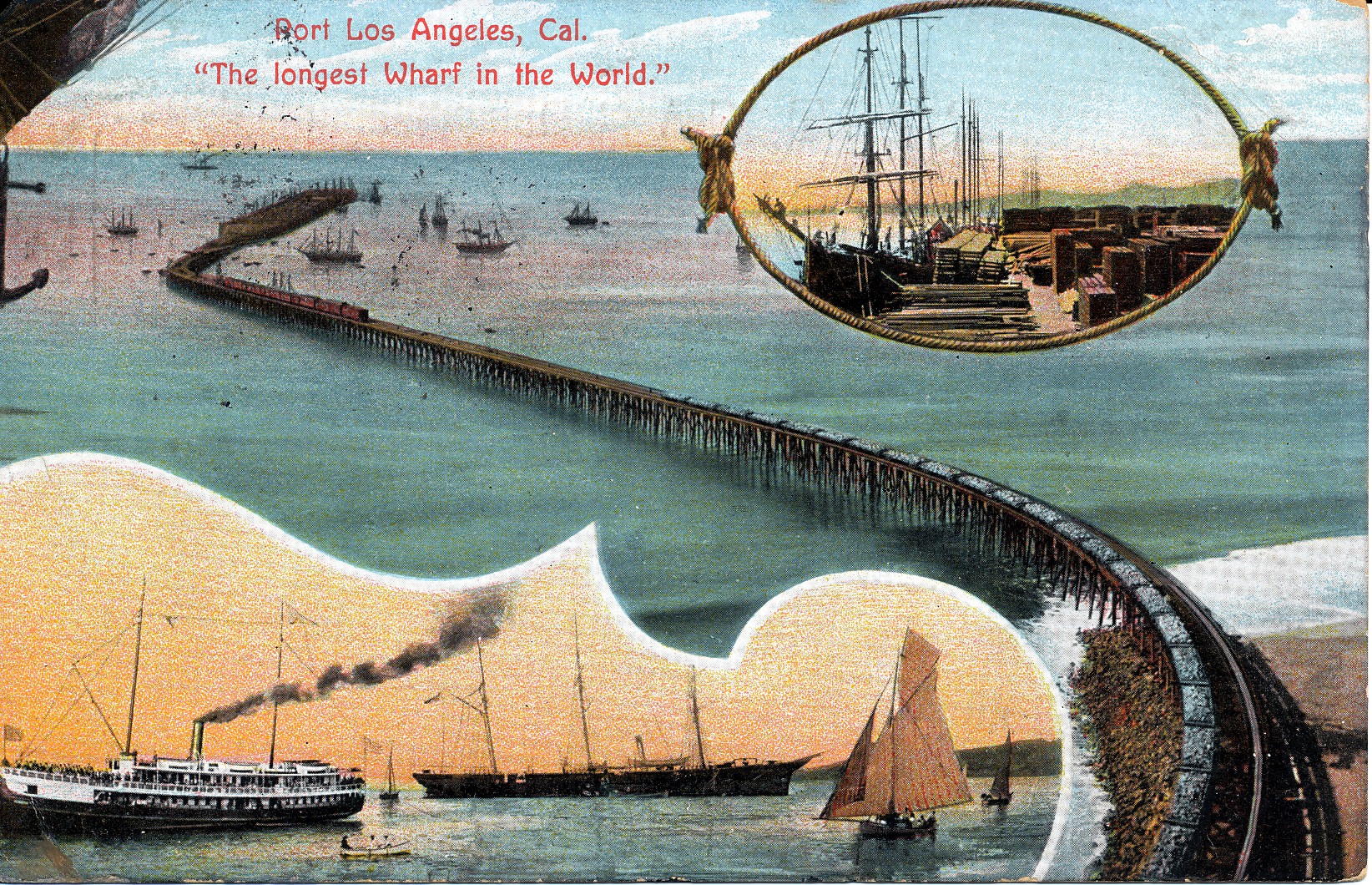 This magnificent, three-mile, deep-sea wharf is a splendid contribution to commerce, and, incidentally, invites and rewards a continuous line of anglers, desirous of tempting nobler game than can be captured in the surf.

However, a “harbor war” soon erupted between San Pedro and Santa Monica. Finally, in 1897, Congress appropriated money for the construction of the San Pedro breakwater and harbor and the “Port of Los Angeles” was doomed. In 1910 Southern Pacific announced it was abandoning the Long Wharf. With the loss of shipping and revenue, the Long Wharf became mainly a tourist attraction. In 1916 it was reduced in size by half and made into a fishing pier. The remaining portion was removed in 1921 and eventually whatever remnants remained of the “Long Wharf” were lost to storms. Today a small plaque sits near the lifeguard headquarters at Will Rogers State Beach, 15100 W Pacific Coast Hwy 1 commemorating the wharf. In closing it simply reads, “Today, no trace remains of what was once the longest wooden pier in the world.”

Collis. P Huntington knew he had, for the first time in his life, a fight on his hands. He wanted the breakwater built at Santa Monica for the very obvious reason that the Southern Pacific had a monopoly there. So confident was he that he could whip Congress into line that he went ahead and built a wharf nearly a mile and a half long going out from the narrow point of land where the road turns into the Malibu. For years it stood there empty and forlorn, growing gray and salt-crusted in the surf spray, a play-ground for children—a convenient fishing place for the Sunday excursionists. Finally, in the winter storms, its worm-eaten piles broke and drifted ashore to make sputtering green- and orange-colored fire logs for the movie colony at Malibu. Nothing burns like driftwood and broken ambitions.

Fishing had by that time become the only major activity on the Long Wharf. At the bait house run by R. A. Muller several hundred fishing poles and tackle were available for rent to the public. On August 17, 1917 a sensation was created when the biggest halibut to be caught in several years was taken. It weighed 62 ¼ pounds, measured 4 feet 2 inches across the back and 5 feet 8 inches from its snout to the end of its tail, and was 40 minutes in the catching.

In response to the increase in tourism, an announcement was made in January of 1898 for construction of a pleasure pier at the foot of Railroad Avenue. However, the city refused to give a franchise for that site (they felt it was too close to the old wharf and Southern Pacific’s rights to that site). Instead, a new group decided to build a pier near the North Beach Bath House. Work began in July of 1898 and the 700-foot-long North Beach Pier opened to tourists and fishermen in August. 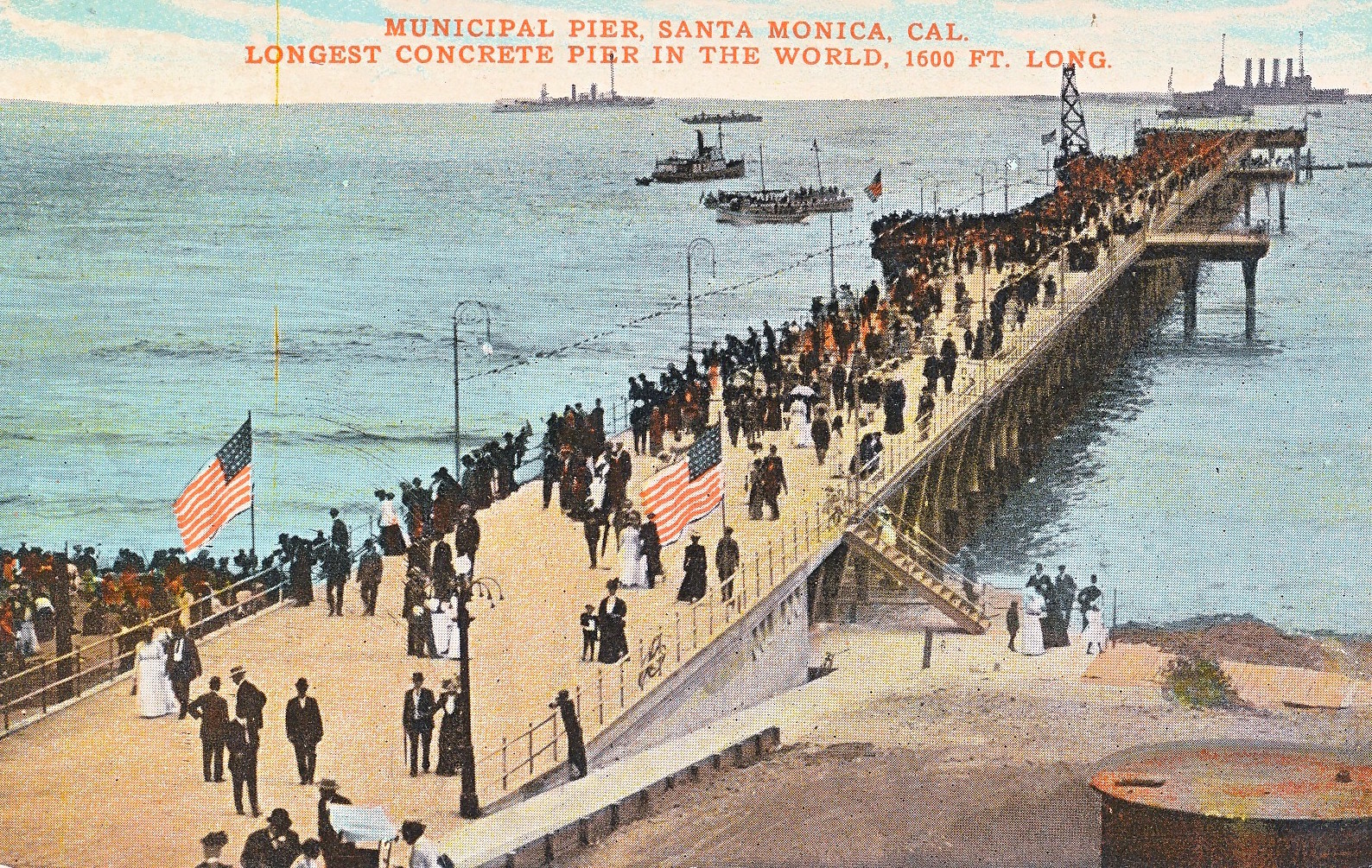 The best was yet to come. Between 1908 and 1909 Santa Monica built the Santa Monica Municipal Pier, a pier designed with dual roles. The main role was to provide support for sewage outfall pipes. Santa Monica was growing and, like most towns, decided to use the ocean to dispose of its untreated waste. A long structure was needed since discharge would be out past the breakers. Hopefully, waste would be carried out to sea rather than returned with the incoming tide. The second purpose for the pier was recreation, primarily angling. In March of 1905 a fierce storm had destroyed the North Beach Pier. It was rebuilt but many felt a larger pier would be useful (which proved true when an additional storm in 1908 once again damaged the North Beach Pier and finally caused it to be declared unsafe). Undoubtedly many in Santa Monica had also seen the success of other municipal piers such as the one at Long Beach.

The new pier was built at the foot of Colorado Street. When it opened on Admission’s Day, September 9, 1909, the 5,000 spectators (along with a flotilla of Navy warships and local smaller craft) saw a pier that was 1,600-foot-long and 35-foot-wide. It also contained three 40’x90’ ‘T’ shaped platforms built at 500 feet intervals from the end. The pier had a concrete deck and was one of the first piers on the west coast to utilize pre-cast concrete pilings.

Festivities that first day included a parade, a band concert, swimming and surf boat competitions, and a high diving contest from the 21-foot-height of the pier above the water (which would never be allowed today). That night, King Neptune visited the lighted pier and was asked why he had destroyed so many piers in Santa Monica Bay. He replied that he did it for the fun. His Queen announced that the new pier was concrete and indestructible—so his fun was at an end. King Neptune was ordered back into the depths and his Queen took his spot on the throne. Flame erupted from a 65-foot-high tower and King Neptune, covered by flames, leaped into the sea. Fireworks capped off the evening. Everyone evidently had a great time.

Fishing was, of course, one of the main activities on the pier and history records the “Fisherman’s Special” that was a weekend feature on Henry Huntington’s “crimson chariots.” The red streetcars, loaded with anglers and all their tackle, departed from Los Angeles promptly at 5:00 A.M., headed to the coast and its fishing piers.

In 1911, after Fraser’s “Million-Dollar Pier” opened in the Ocean Park area of Santa Monica, several new amusement piers were proposed. None were built until Charles I.D. Looff arrived in Santa Monica in 1916. Looff had a long history as a builder and operator of amusement carousels (including Coney Island) and operated the Looff Carousel at the Pike Amusement Zone in Long Beach. He had built a carousel at the nearby “Million-Dollar Pier” but the fire on the pier destroyed it in 1912. In 1914 he had asked Long Beach for permission to build a new amusement pier near the Pike. His request was denied. Santa Monica was more receptive and he was awarded a franchise to build a pier adjacent to the already built municipal pier.

On March 25, 1916, construction of the Looff pier began. Looff’s Carousel & Hippodrome (a Byzantine styled, two-story high building) opened on June 10th. The Blue Streak Racing Coaster opened on August 2nd. The same month two more rides, the Whip and the Aeroscope rides, were opened. The 700’x267′ pier quickly became one of the premier entertainment piers in the state. That winter he opened a bowling and billiards building. The next spring and summer saw the installation of a fun house and a bandstand. Soon after, Charles Looff died, but his pier already was a success.

On August 17, 1919, thousands of people were on the Municipal Pier to view and visit a large fleet of Navy vessels anchored in the bay. During the afternoon, the north side of the pier suddenly trembled and sank two feet lower than the main deck. Although many panicked, no one was hurt. On September 4 the pier was ordered closed for sixty days and engineers began to examine the pier and pilings. In November, the pier was condemned. Nearly 200 of the pilings were rusted, cracked or entirely gone. The contractor had improperly mixed the concrete. Work started on a new Municipal Pier on March 30, 1920, a pier using creosoted wood pilings. The new pier, now widened and lengthened to 1,640 feet, officially opened on January 19, 1921.

Although the Palisades Pavilion dance hall was opened on the Looff Pier in 1921, business declined in the early 20s. In 1924, the Looff family sold their pier to the Santa Monica Amusement Company and shifted their attention to the amusement zone at Santa Cruz. The new owners soon replaced the Blue Streak Coaster with the larger Whirlwind Dipper roller coaster. It opened on March 30, 1924. Next they built the La Monica Ballroom, a huge 227’x180′ building whose gray Spanish stucco was capped with a dozen towers. At night each tower was lighted by hundreds of lights. The ballroom had room for 10,000 dancers and spectators and was highlighted by a 15,000 square foot maple dance floor containing elegant inlaid patterns. Up above, thirty-six bell-shaped chandeliers hung suspended by gold rope. On the wall was depicted a submarine garden. The intended affect was to make dancers feel like they were dancing on the coral floor of the sea. 25,000 people visited the pier the night the ballroom opened on July 23, 1924, and La Monica was an instant hit and would remain so for a decade.