<*}}}}}}}}}>< — An interesting story concerns what is almost undoubtedly the largest California halibut ever landed on a pier in the Golden State—if the weight was accurate. In March of 2001 it was reported that an angler had landed a 58-pound, 11-ounce, 4 1/2-foot-long halibut at this pier. The fish was brought up to the pier and then taken down to a fish market to be weighed. Amazingly no pictures were taken, nor were certificates filled out to enter the fish into the record book. Even more amazing was the fact that the angler returned to the pier the next day and hooked and landed a 25-pound halibut (which was photographed). Either fish would qualify as a lifetime best for most California pier fishermen. And, not to end the story there, an additional 3-4 fish in the 20-25-pound range were landed during the next three days. Why so many large halibut were there at the pier during that short time span is anyone’s guess. The entire story was the subject of an intense debate on the Pier Fishing in California Message Board for several days (with most refusing to believe that the reported weight was accurate). John, one of the owners of the bait shop on the pier reported the story to me and said it was the largest halibut he had seen in his 45 years at the pier (and he saw the length measured). Since John is a very accurate reporter to the PFIC site I stuck with the story. 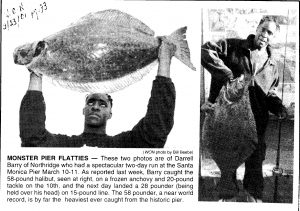 As a follow-up to the above, I received a note in 2008 from Bill Beebe, the long-time angling writer for the Los Angeles Times. “I interviewed the guy who caught it [the halibut] and wrote a column about it. He was a man in his ‘20s who used to ride a bus everyday from his L.A. home to fish the pier. His tackle was, jokingly, almost as old as the pier. I don’t remember the reel or rod, but he used 20-pound monofilament line of God knows vintage to which he tied a couple of packaged snelled bait hooks. He used dead anchovies for bait. He fought that fish for 45 minutes, most of the time as it swam in circles at times bumping the pier pilings. It was too big to fit in the biggest drop net supplied by the tackle shop on the pier. It finally was taken by a rope gaff and hauled onto the pier. He took the halibut to the fish market, located next to the parking lot, and tried to peddle it to the owner. But the owner was so afraid that the fish had caused so much ruckus he feared a warden would get wind of it and cite him. So the fisherman cut it up and took most of it home on the bus. I don’t recall what he did with the rest of it.” 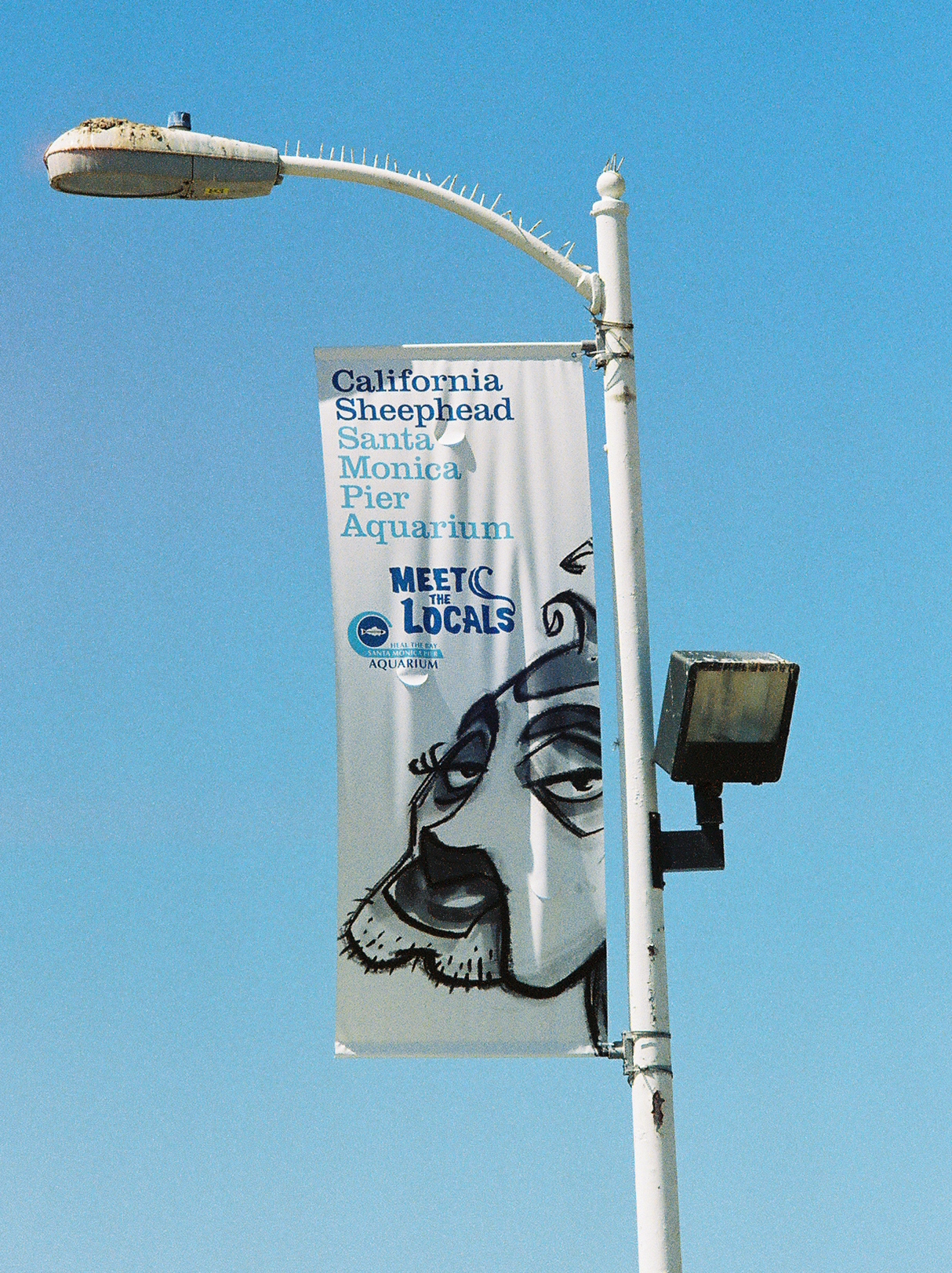 <*}}}}}}}}}>< — An educational place to take the kids sits under the pier. The Santa Monica Pier Aquarium, formerly the UCLA Ocean Discovery Center, is housed on the beach under the carousel. It’s operated by Heal The Bay and is open Tuesday through Sunday most of the year. It contains wall displays, inter-active touch tanks, tide pools, shark tanks, and many types of jellyfish.

<*}}}}}}}}}>< — Although the fishing dominates the end of the pier, the inshore and mid-pier areas are dominated by a whole different type of entertainment. Mid-pier sees a return to the Amusement Pier day’s of the early 1900s (although updated technology has been used with some of the rides). Pacific Park dominates the view. Included in the park are a fairly-tame roller coaster—the West Coaster, the Pacific Plunge, bumper cars, several kid’s rides and even, at times, a live circus show. A nine-story-high, solar-powered Ferris wheel—the Pacific Wheel—used to anchor the park but was sold off and shipped East in 2008. Nearby is the famous 1916 carousel built by Charles I.D. Looff (seen in several movies, including The Sting). Close too is the Playland Arcade that has over 200 attractions, from Skeeball to a pelican kiddie ride and three-passenger merry-go-round. 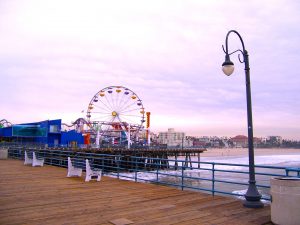 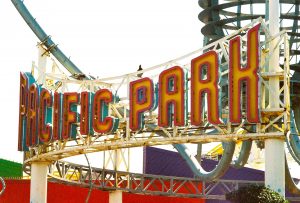 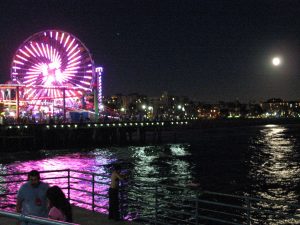 In the summer, the city provides a free concert series every Thursday night (Twilight Dance Series) with some pretty decent bands. It’s nice on a summer Thursday night—fishing, watching the bright lights, and listening to the music. Tuesday nights in September sees a different entertainment—free movies—during the Santa Monica Drive-In at the Pier program (see www.santamonicapier.org for ticket information). Oh, and don’t forget the cotton candy and saltwater taffy. Not too shabby!

In the early morning gray-lavender light.

Look out with sun and age-faded eyes over the ocean

That perhaps once belonged to them.

The morning peace is over

Shout at each other

As they carry tubs

To the seafood restaurants.

The spell is broken.

You can sail around the world to see the sights — And even see the famous northern lights, —But strange as it may be — I’m sure you will agree — The greatest sight of all is by the sea

A fish was using Lifebuoy soap, she knew how he felt — She never smelled a smelt that smelt like that smelt smelt — So Veronica took her harmonica — And left the pier at Santa Monica

I fished Santa Monica Pier for two years, with a year straight every weekend. Where’s the sweet spots? Here you go.

When you walk out on the pier, the first temptation is to go to the end. Don’t bother. The whole front is a wall of snags from the lobster poachers and they’re lines of treble hooks. If you insist to fish out there, go to the very far left on the top and cast out towards Venice. Also, the winds will get you after awhile.

Some of the best fishing is found right before you get to the bathrooms and Harbor Patrol office. The last bench that sits on a section of pier (finger) goes out on the left (not the lower area) sits above an area with no snags. Sand and grass are it. Either side of that are snags from parts of the old pier, so don’t fish on the bottom if you can avoid it. The right side of the pier also has snags from about 5 feet out to 25 feet. Past that, you run the chance of getting crossed by someone else’s line. On the left, the casting trick is to walk out by the boats, cast out and then walk your rod back to the finger. This will double your casting distance.

If you’re looking for halibut, fish close into the pier. I’ve pulled 30” hallies up around the pilings, and have seen bigger fish caught there as well. Use a 2-3oz slider sinker with a leader and live bait. Frozen anchovies will also work.

Perch can be found all over around the pilings. Use fresh mussels or lug worms. Wylie’s Bait at Topanga Canyon has them, and isn’t far up the road from the pier to get bait and tackle at. In fact, it’s probably one of the better bait shops around.

The trick with the perch is to use a bobber and 4-6′ of line under it. Place a small split shot on the line to get the bait down. Big Sargo are caught right around the area under the restrooms and the restaurant.

Sharks and rays like squid, fished out from the pier. Bottom rigs or sliders will work. Leopards, shovelnose and others are seen from time to time. I’ve seen soupfin sharks caught out there as well. You can also use live bait, like anchovies, herring or sardines if you catch them.

If you get bored and have a light rod, rig up a Carolina rig with a strip of squid and cast out and retrieve. Something will go after it. You can also use grubs and do a little surf fishing down towards the amusement park. Fish in the surf, behind the breakers.

Catching bait will require a light rod and a small Sabiki rig. I like the ones with a rainbow reflection. The straight white ones don’t work as well. Wallmart, Bass Pro Shops, Cabela’s and Boating World on Lincoln sell these. If you really get stuck, I can get them here in Bakersfield and can mail them to you. It’s easy to spend 4 hours catching more bait than you can imagine. Ask Sinker about ‘chovies at Ventura…

Crabbing is another hot item, and April-May are killer for spiders. Use chicken legs and thighs, which can be had for $4 at Vons and other markets. Tie 3-4 pieces into your nets and drop them in the corners. Be careful if the water is moving a lot. One, the crabs will not be there, and Two, the nets will get snagged and you’ll loose them. I pulled 30 spiders in one day there, and brought home 6 for about 30-35 lbs of crab. Big males show up from time to time and they go up to 18lbs+. Bring an Igloo cooler and keep the water fresh.

A few words of warning. The Harbor Patrol from time to time will check that regs. are being followed. Don’t cast overhead if you can avoid it. And keep an eye on your stuff, since the people count on a summer weekend can hit 100,000 or more. Always fish with someone else out there. SM is a really bad town to get a ticket in, since you will pay the max fine for anything. Also, make sure you don’t bug the people selling stuff or performing. Chances are you’ll be asked to leave. The wind is also a factor out there. Fishing close to the buildings will cut a lot of it down, making fishing more enjoyable. It will also come up and die down around sunset.