Railroads also played a part in the growth of the area when the narrow-gauge Santa Clara Valley Railroad was bought by James Fair, James Flood and Alfred “Hog” Davis. They renamed the line the South Pacific Coast Railroad, extended the railroad from Dumbarton Point to Santa Cruz, and eventually offered daily commute service north to the Alameda Pier. In addition, people could catch the railroad’s ferryNewark, which ran daily trips from Dumbarton Point to San Francisco. Eventually that railroad was bought by Southern Pacific and this area became one of the busiest freight junctions in California.

The original “Dumbarton Bridge” was the Dumbarton Cutoff Railroad Trestle Bridge. The train bridge was constructed between 1908 and 1909 at the shallow part of the bay between Dumbarton Point and the Palo Alto area. It was the first bridge across the bay and carried six to eight freight trains daily between 1910 and 1982.

However, the real “Dumbarton Bridge,” the one that served as the precursor to today’s Dumbarton Bridge—and this pier—was an iconic bridge that opened on January 15, 1927. It was the first bridge to allow automobiles to cross San Francisco Bay and was, until 1929 when the San Mateo Bridge opened, the longest highway bridge in the world. Unfortunately, the bridge was only two lanes wide, was built close to the water, and was a drawbridge. As with most drawbridges, long backups in traffic could occur when a boat decided to travel under the bridge. It was also a toll bridge with users paying the grand sum 40¢ each way.

Built by private funds (the Dumbarton Bridge Company), the bridge was partially rebuilt in the 1940s to deal with increased traffic. In 1951 the state bought the bridge for$2.26 million dollars.

By the ‘60s, it was obvious that the old bridge needing either an expansion or needed to be rebuilt as a larger bridge. The latter option proved more feasible and in the ‘70s the state began planning a new bridge.

In December 1984 a new Dumbarton Bridge opened (at a cost of 74 million dollars), one that was four lanes wide and high off the water. The bottlenecks seemed at an end. Users now paid a toll 75¢ to help defray the costs of the bridge.

In 1989, as a result of the temporary closing of the San Francisco—Oakland Bay Bridge (due to the Loma Prieta earthquake), the bridge was restriped to accommodate six lanes of traffic. Unfortunately the widening of the approaches wasn’t completed until July 2003 (at a cost of $200 million); one result was new traffic congestion, especially during rush hours. The toll, westbound only, as of 2010 was $5.

Although the middle section of the old bridge was blown up in 1984, farsighted individuals had seen a use for both end sections. The eastern end of the bridge became the Dumbarton Fishing Pier, the western end became the Ravenswood Fishing Pier.

Looking back, many wharves and piers dotted the South Bay during the second half of the 19th Century. One was near the mouth of Alameda Creek where, in 1850, John Horner bought land and built several piers and warehouses; eventually the area became Union City. 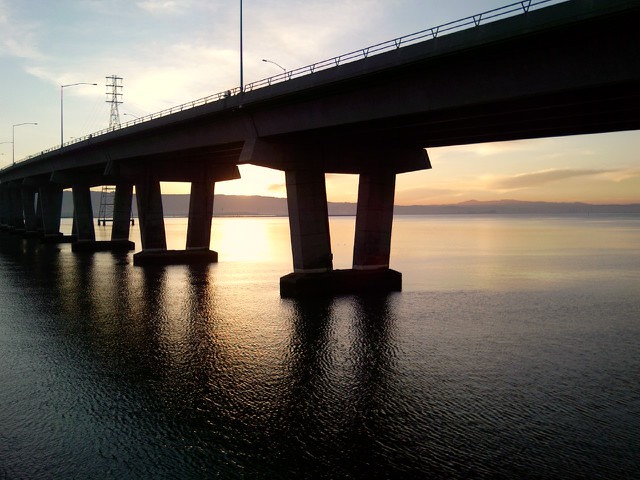 Hours: Open daily from 6 a.m. to 8:30 p.m. except for Thanksgiving, Christmas and New Years. The road to the pier is closed from April 1 to August 31 but a free shuttle runs from the Visitor Center to the pier at 9 a.m. and 12:30 p.m. The shuttle picks up returning anglers at 12:45 and 5:15. Reservations for the shuttle are advised (510-792-4275).
Facilities: Free parking is located at the foot of the pier. Portable toilets will be found at several spots on the pier. Fish cleaning stations, benches and windbreaks are found on the pier. There are no facilities for bait and tackle or food.
Handicapped Facilities: None specifically although the pier’s surface is blacktop and easily used by wheelchair. The railing is approximately 42 inches high.
How To Get There: From I880 take Highway 84 west to the Paseo Padre Parkway exit; follow the exit and road south back under the highway, the road will turn into Thornton Avenue; follow it till you see the signs on your right indicating both the visitor center for the wildlife refuge and the pier; after entering the refuge, follow the road three miles to the pier.
Management: U.S. Department of the Interior/Fish and Wildlife Service.