Agreement was finally reached that a major reconstruction was necessary. Funding was found to carry out the ambitious $3.5 million plan (City of Ventura, California Department of Parks and Recreation, Coastal Conservancy, and the Wildlife Conservation Board) and the work began. Pilings and decking were replaced, fish cleaning stations were added, a snack bar and bait shop was added, restrooms were added, the entrance was widened, and a 5,000 square foot restaurant was built at the shore end of the pier.

On October 2, 1993, the beautiful new, renovated Ventura Pier opened to cannon fire and a flotilla of boats. Soon after, 100 swimmers dived from the pier to swim around and commemorate the pier. The only complaint was from the fishermen who had to wait until late in the day before the crowds cleared and a little serious fishing could begin. 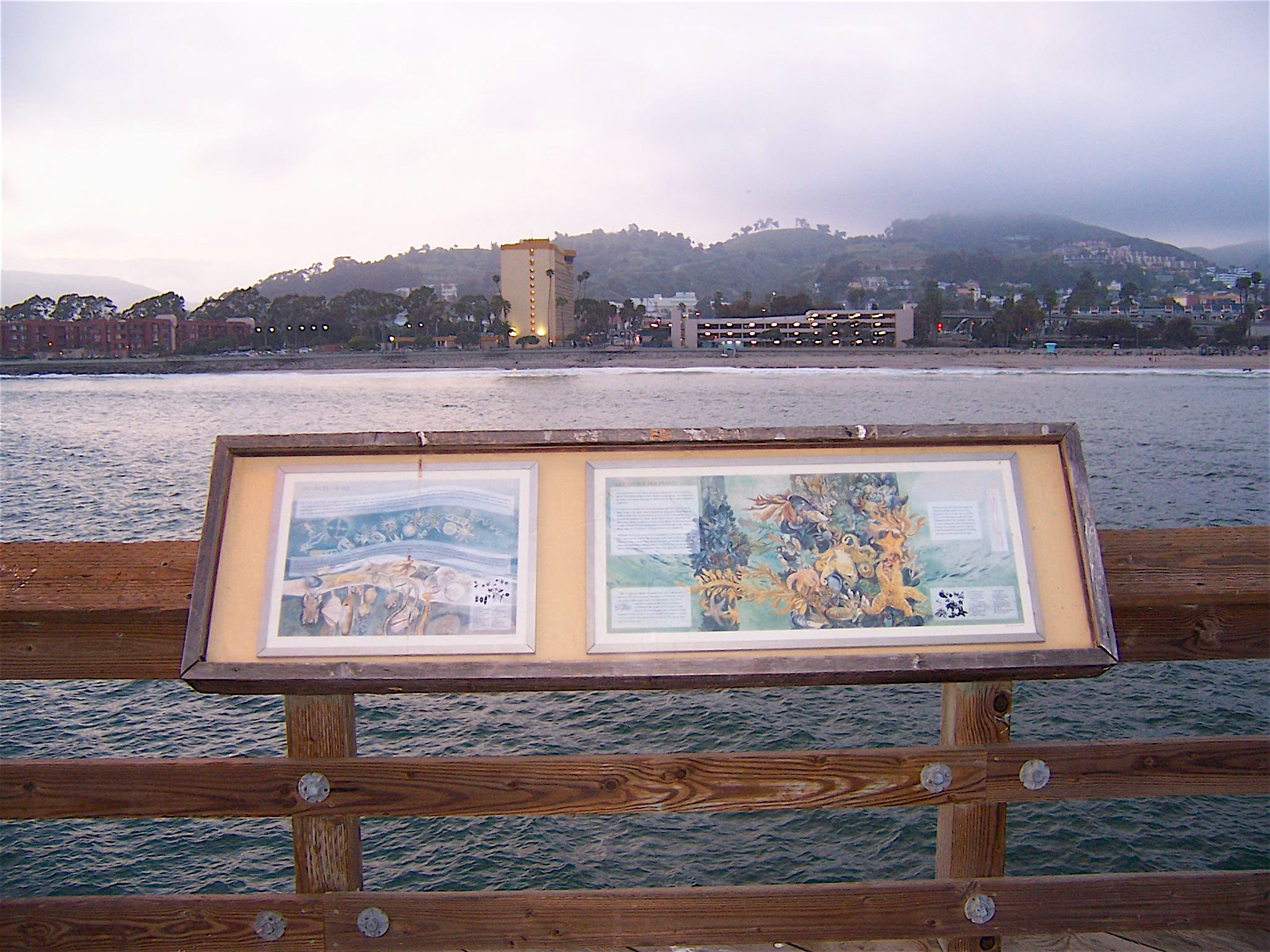 An interesting feature of the pier was a series of interpretive panels, thirty in all, that described local history and ecology. Another interesting item was the “Wavespout,” an $80,000, 6’x6′ copper kinetic sculpture built at the end of the pier; the copper fountain imitated a blowhole and spurted saltwater up to 10 feet high.

Alas, even that major project would not be the last. Storms in December 1994 and January of 1995 necessitated a $500,000 repair and then on December 13, 1995, pounding surf ripped out 420 feet of the pier, including over 150 pilings and the “Wavespout” sculpture. The sculpture washed ashore in two pieces; the pilings were found scattered along the Ventura County coast.

A minimum of $1.5 million, and perhaps as much as $3.3 million, would be required to fix the pier (including placing the sculpture back on the pier). Mayor Jack Tingstrom vowed that the pier would be rebuilt…“it is such a valuable asset to this city…we will just have to find a stronger way to build it.”

The pier eventually had a $2.2 million upgrade, one that included new steel reinforced pilings and a new square deck at the end in; it was finished in 1998. Such is the history of piers at such locations.

What is most impressive to me is the efforts made by local citizens to raise money to restore and maintain their “beloved” pier. In 1993 the community formed a “Pier into the Future” campaign to establish a $1 million endowment fund for the pier. To raise the money, several different fundraisers have been used. In one, individuals, businesses and civic groups can donate various sums of money—$125 Deck Hand, $1,000 First Mate, $2,500 Commander, $5,000 Captain, $10,000 Admiral. In response, they receive a variety of commemorative plaques, “Grant Deeds,” and get their name engraved on an honor roll at the entrance to the pier. A second, highly successful event has been a “Pier under the Stars” food and wine tasting event (which includes a commemorative Pier wine glass). Another has been selling t-shirts, caps and other products, including salsas and barbecue sauces with labels showing the old pier. Last, but certainly not least, has been the issuance of several calendars showing old-time pictures of the pier ($5). It’s a great approach and one that should be copied by many communities. Pier anglers wanting to help Ventura’s campaign can contact these good folks at: Pier Campaign, P.O. Box 99, Ventura, CA 93002-0099, or call them at (805) 658-4739. 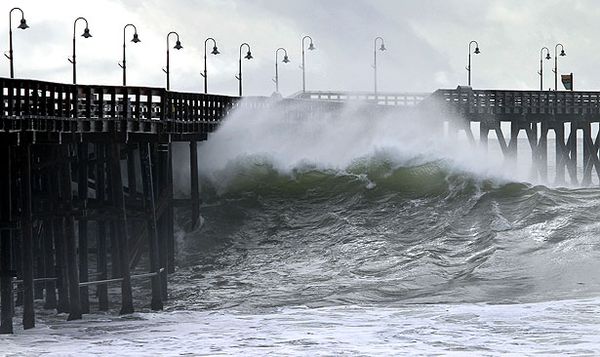 The fundraisers continue and the money is still often needed due to various storms and the damage they inflict. On January 20, 2010, mother nature once again ravaged the coast and inflicted damage on several piers — including Ventura. “Rogue waves” topping 15 feet knocked out a piling and threatened several other resulting in the pier being closed for several days.  Sporadic damage continues to be reported over the years.

Today the pier appears to be in good shape and contains an interesting series of displays to help enrich the environment of the pier. One display shows a perpetual tidal movement and describes the forces that affect the tides. Long live this pier and the group that protects and preserves it. 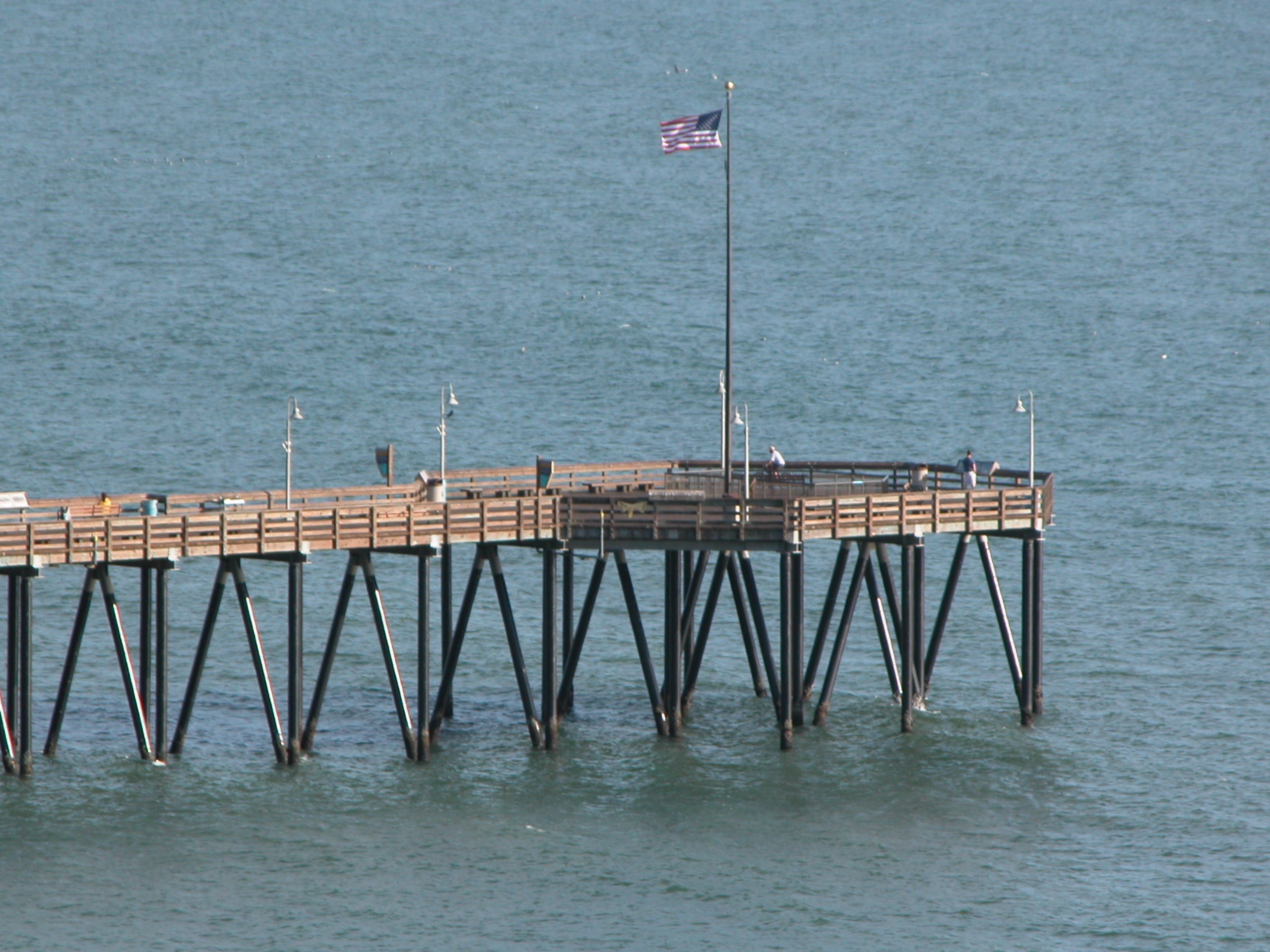 Before the coming of the white man and the wharf, the coastline west of the pier was a site from which the native Chumash Indians launched their tomols or plank canoes in pursuit of trade with other coastal and Channel Island villages. One headquarters was the village of Shisholop (meaning in the mud), located in what would be today’s Ventura. The main trade was shell bead “money,” acorns, and fish. The village, established around 1000 A.D. was the site where Spanish explorer Juan Rodriguez Cabrillo first encountered California Native Americans in 1542.

Facilities: Lights, benches, fish-cleaning tables, restrooms, bait and tackle, and a snack bar are all found on the pier. A large fish restaurant, Eric Ericsson’s Fish Co., is located at the front of the pier. Near the pier is the parking lot for San Buenaventura State Beach; the cost is $1 an hour not to exceed $5 a day. The parking lot is open 6 A.M. until 11 P.M. but you may leave the parking lot after 11 P.M. since they do not lock the gate. There is very limited free side street free parking but you need to arrive early and be prepared for a considerable walk to the pier.

Handicapped Facilities: Handicapped parking and restrooms. The pier surface is wood and cement and the rail height is 36 inches. Access to the pier is from the public parking lot and then up a number of stairs (which are steep) or Handicap Accessible at the pier entrance off the main road.

How To Get There: From Highway 101 take the Seaward Drive exit west to Harbor Drive, turn right and follow it to the pier.