(4) Pay attention to any fish you leave on a stringer in the water. One mid-October day I was fishing at the pier with John, had caught a nice kelp greenling (seatrout), and had put it on the stringer, which was dropped into the water. Soon after, John gave an exclamation and ran to the stringer. A large lingcod, in the twenty pound category, had his (her) mouth around that seatrout and was hanging on, much as do the hitchhiker lingcod which grab hooked fish out on the rockcod boats. Although I tried to snag that fish with my treble-hook gaff, and almost got it with one drop, it ultimately proved too smart, and got away. Later, after talking to several anglers, I found out this had happened a number of times. Since there are a lot of lingcod around this pier, be prepared. 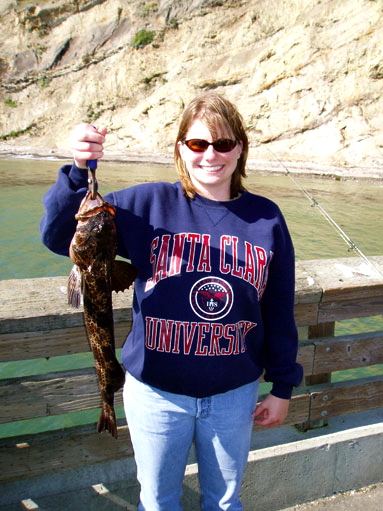 (5) Bring binoculars with you. This pier is probably the best in the state to get a really good view of a whale. Every year gray whales pass close to the cove while making their annual trips up and down the California coast. Several times I have seen these whales playing right in the cove, swimming around the boats which are anchored near the front of the pier, and at times, the whales were within casting distance of the pier. It’s hard to imagine whales in such shallow water but the moderate depth doesn’t seem to bother them.

Went out fishing early morning till afternoon with my wife. Got one under-sized ling. Had a few bites and snagged fish. Some other people fishing also hooked into some under-sized lings as well. A few striped surf perch and small greenling were being caught as well. Squid, anchovies, shrimp, were all getting bites on hi-low rigs. Very nice weather. Almost no wind — which is almost unheard of at Point Arena. Ended the day with a pretty big octopus. Will post photos soon! 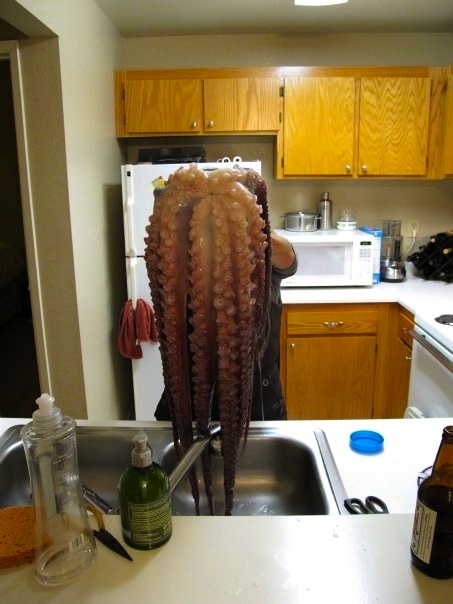 The octopus in the kitchen — a big ‘un

<*}}}}}}}}}>< — For years, before actually becoming a teacher at the Anderson Valley High School in Boonville, I was active in a number of different capacities at the school. For a couple of years that included  being an advisor to the marine biology instructor Linda Wallis. We would make trips over the hill to Point Arena where the students would release the marine organisms that had been in the school’s saltwater tanks and then find new species to take back to the school. After searching out the inshore reefs we would inevitable also fish from the pier and the students caught some pretty impressive fish. We would haul the fish back to Boonville where they would be cleaned and their stomach contents studied before being taken home for dinner by the students. Herein a few pictures. 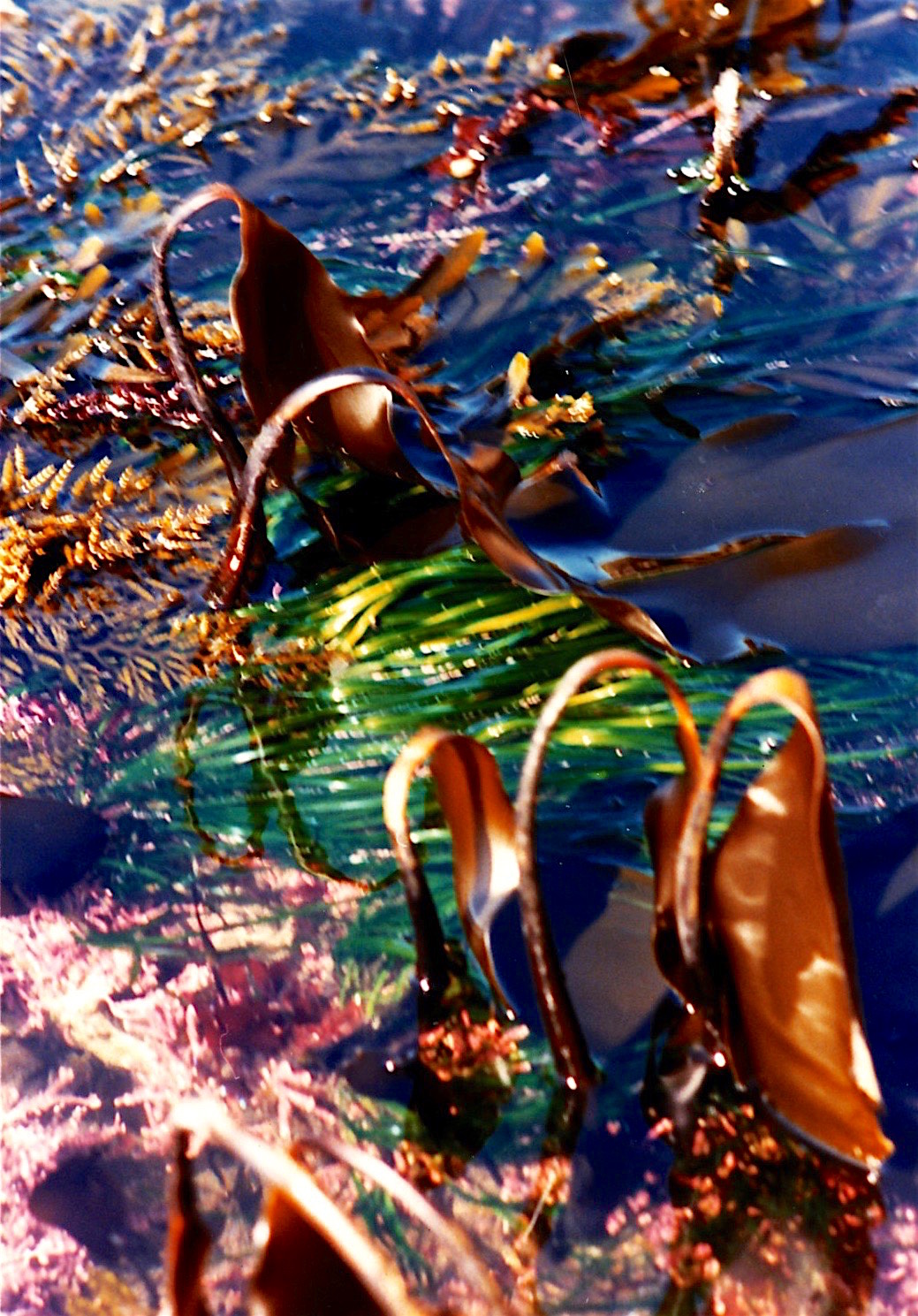 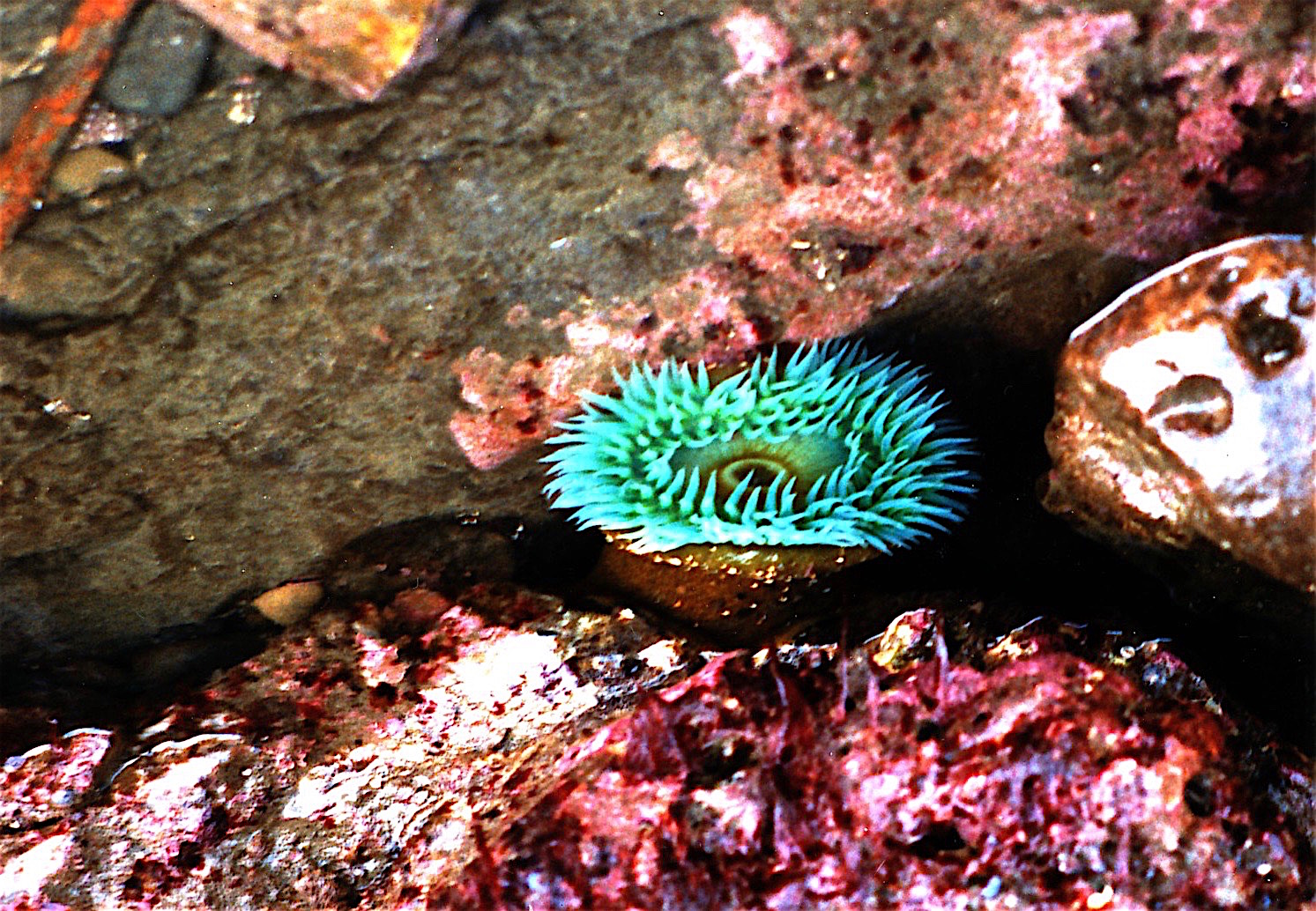 The inshore rocks and reef areas are covered with a variety of seaweeds, kelp and other organisms 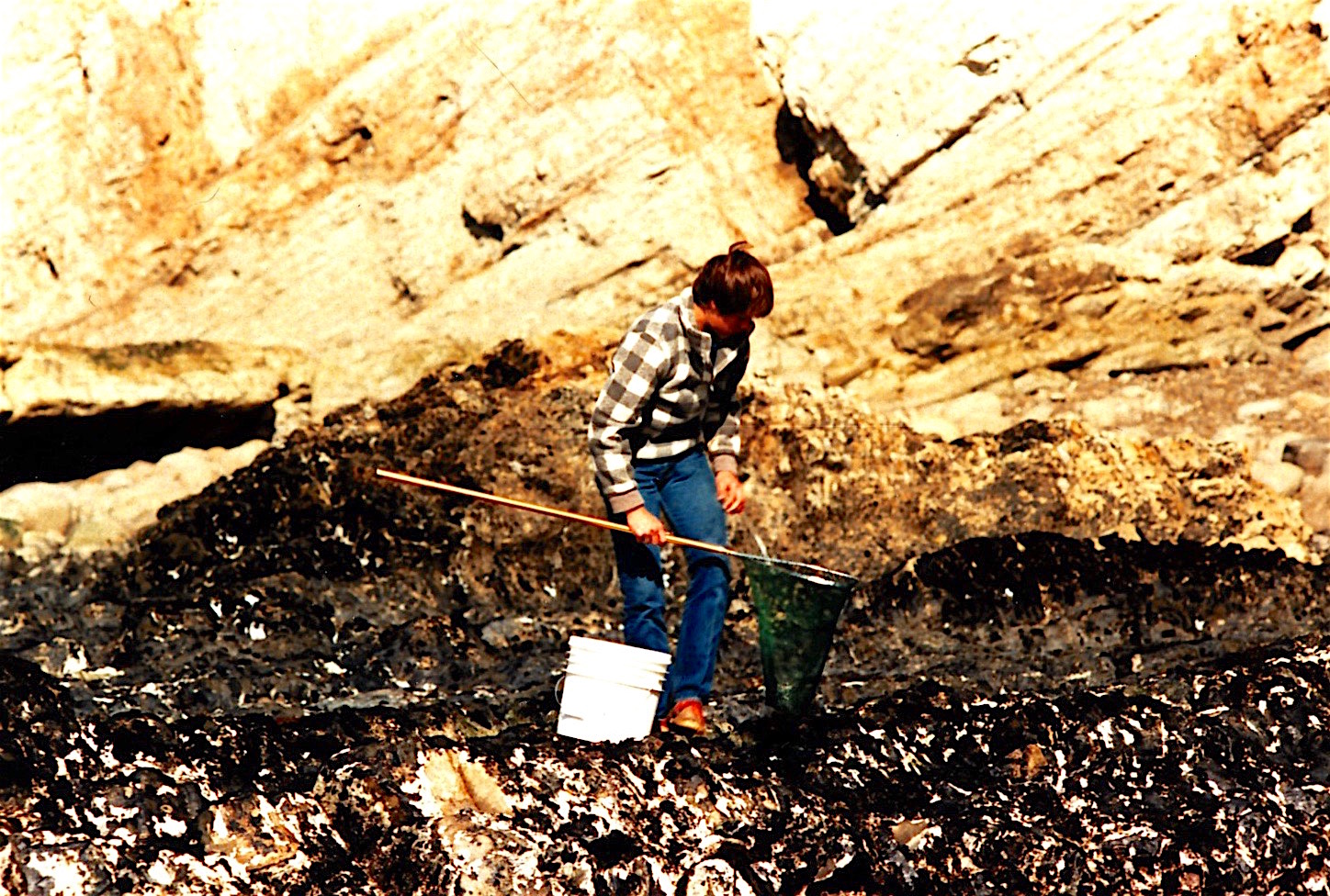 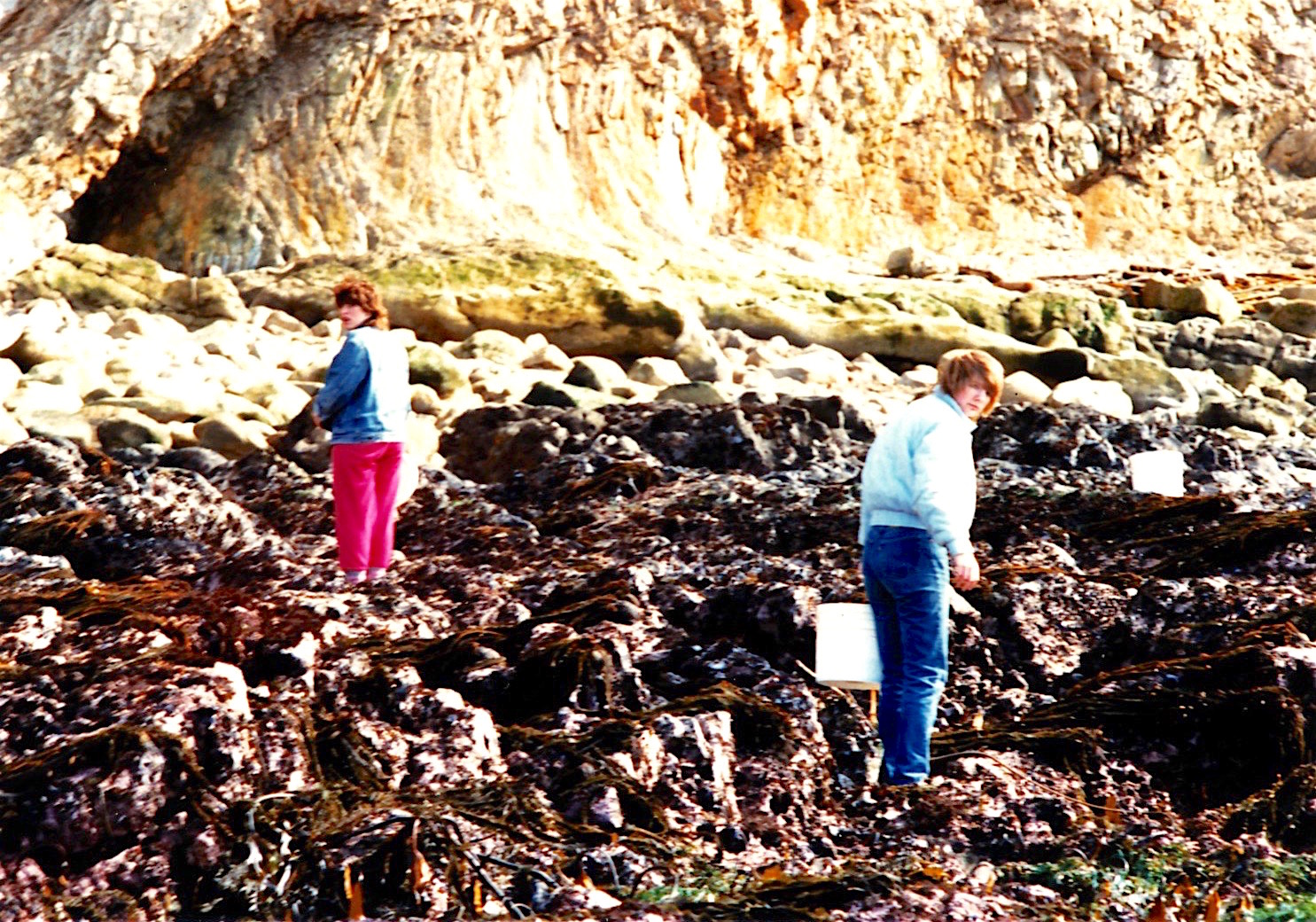 What will we find today? 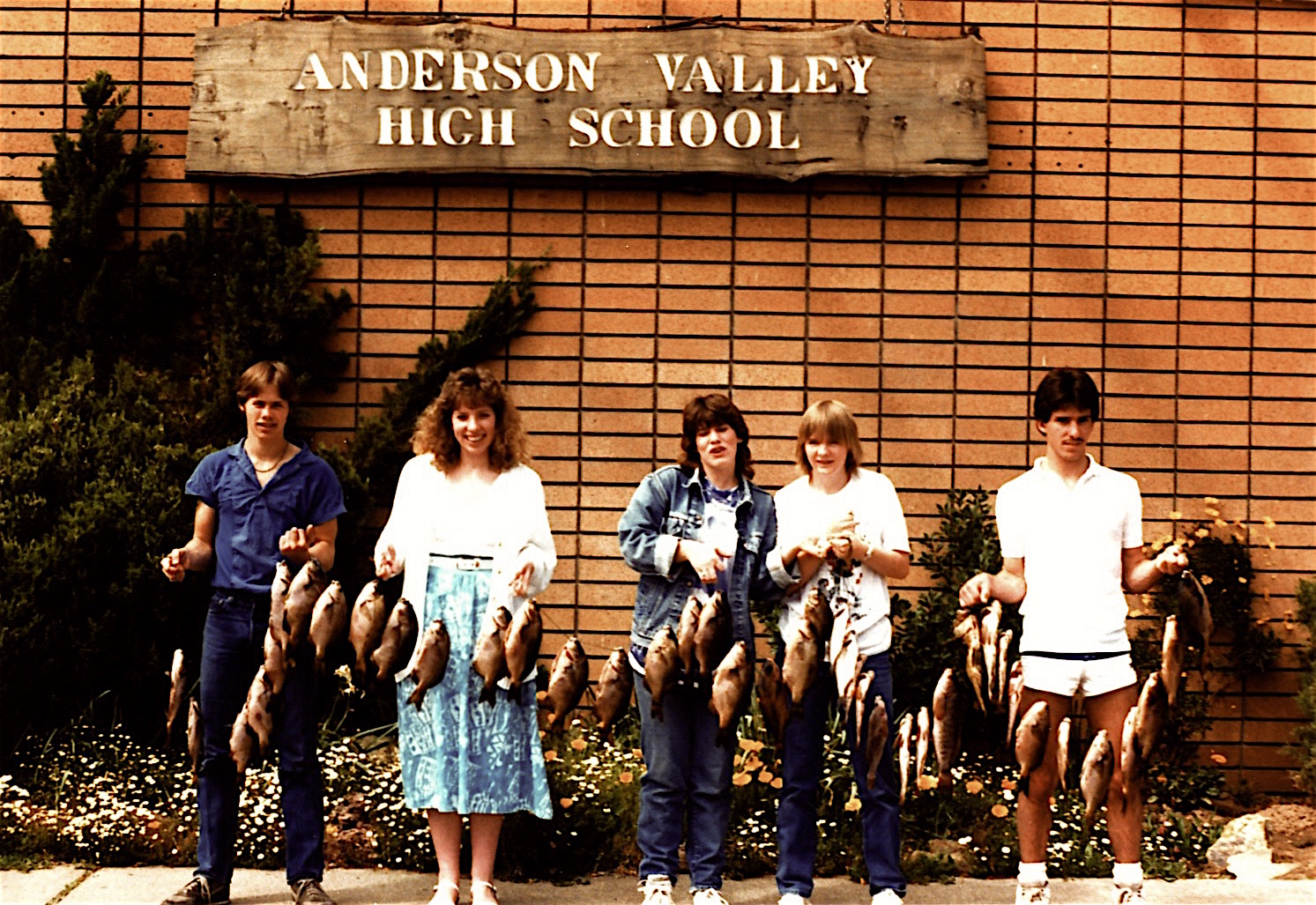 We would not keep that many fish today. 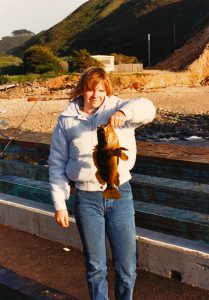 One of my students, Debbie, with a grass rockfish 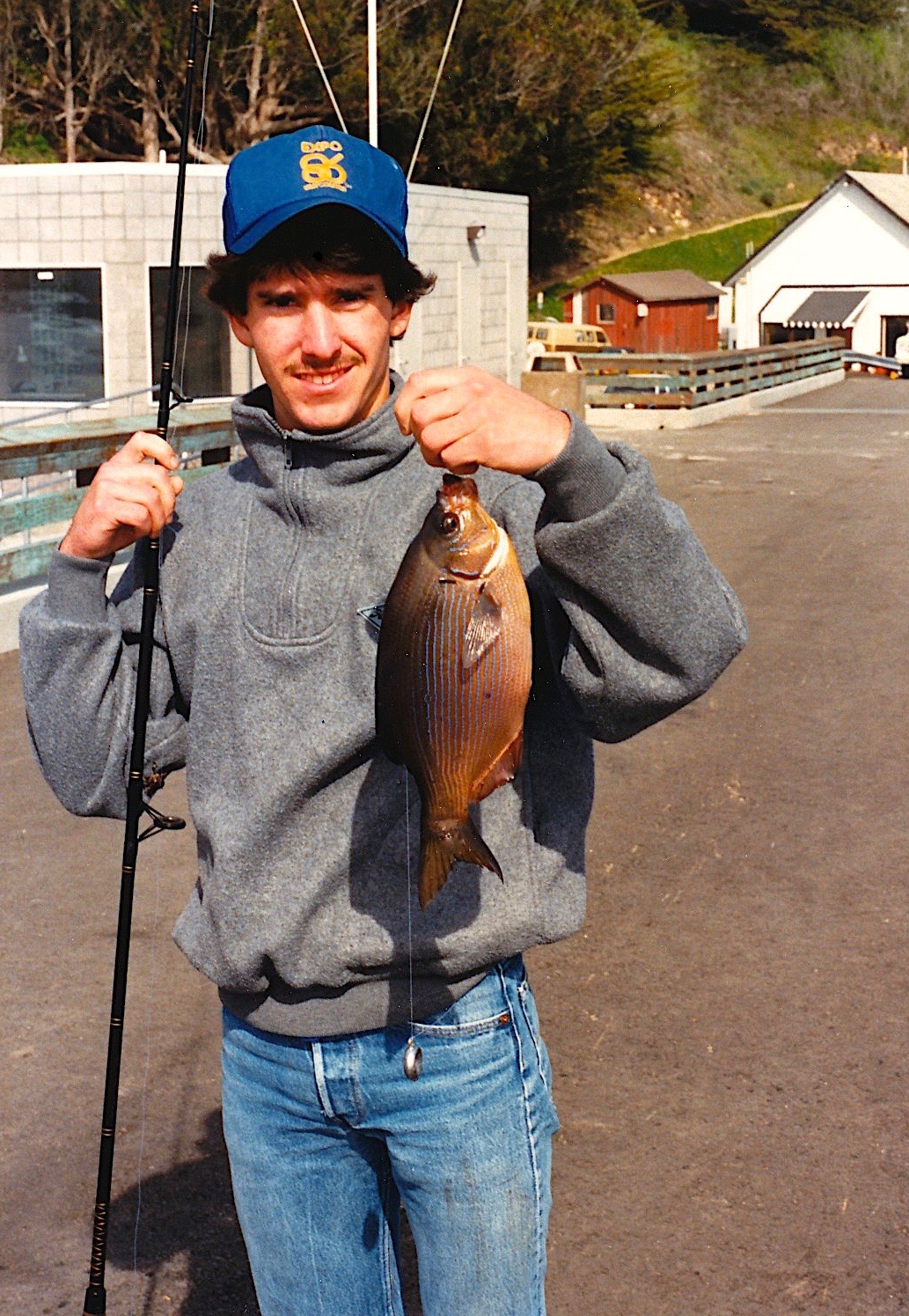 James with a striped seaperch

<*}}}}}}}}}>< — Records kept by the Department of Fish and Wildlife confirm the main catch of fish from the pier. Leading the hit parade are striped seaperch and silver surfperch followed by several other perch—walleye surfperch, calico surfperch, white seaperch and shinerperch. Kelp greenling are a common catch as are cabezon, black rockfish, grass rockfish, and a several schooling species—Pacific sardine, surf smelt and topsmelt. 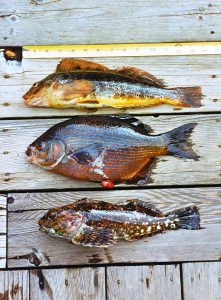 Common species at the pier — Kelp Greenling, Striped Seaperch and a small Cabezon

<*}}}}}}}}}>< — Now I don’t want to say that some of the people in my old Mendocino County stomping grounds are a bit strange, but… from the Barbary Coast Dive Club Newsletter of September, 1999: “Another highlight of the weekend was the Drowning Woman Parade on the Point Arena Pier. According to the locals, the Festival is a response to the annual Burning Man festival that is held in the Nevada desert. The parade featured a number of revealing, wacky costumes like a guy with a pig head mask who was walking around wearing a giant dildo… Perhaps next year the BCD club can enter a float in the parade. Any ideas…?” My suggestion would be to stick to diving. 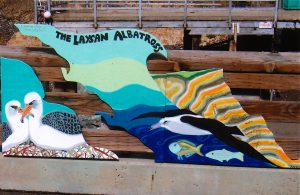 ‘THE ALBATROSS IS BACK’ — Mr. Al B. Tross has a following at Point Arena

The “Cove Coffee” shop at the Point Arena pier held a modest crowd, with people sipping hot brew and peering at their newspapers shortly after 7 a.m. Saturday. Then the front door was flung open.

“The albatross is back!” a young, bearded man announced. “Just saw him come in and land.”

The customers all nodded and smiled. They were relieved, because the bird had vanished for almost a week. It was easy to understand why someone might get excited about seeing a bird with a 6- to 7-foot wingspan sail into the home cove. I jumped from my table and went to take a look.

This illustrious visitor is a legendary bird locals had named Mr. Al B. Tross, a wandering Laysan Albatross (Phoebastria immutabilis) who has wintered at this harbor in southern Mendocino County for fourteen consecutive seasons. Though the phenomenon of “”agrants” — individual birds who depart or are blown away from customary migratory routes — is well-known in the birding world, this albatross is something special. He’s not simply dropping by. It seems he has adopted Point Arena as his winter home.

[Post script — Unfortunately the albatross has not been seen for several years.]

<*}}}}}}}}}>< —  An interesting plaque sits near the front of the pier: “This monument dedicated to the fifteen young men from Yawatahama, Japan who sailed 11,000 kilometers across the Pacific in a 15 meter wood boat to realize their vision of coming to America. Landing at Point Arena on August 13, 1912, their dreams and courage continue to be a source of inspiration and a foundation of the friendship between the people of Yawatahama and Point Arena.” Raven B. Earlygrow, Mayor of Point Arena.

<*}}}}}}}}}>< —  When I taught at Anderson Valley High School, I also coached girls basketball and was Athletic Director for a number of years. Point Arena was one of our main league rivals and some of the games with the “Pirates” were so intense that we needed a police escort out of town. Perhaps a better mascot than “Pirates” would have been the “Beavers” since Point Arena is the home of an endangered species of beaver—the Point Arena Mountain Beaver (Aplodontia rufa nigra). The beaver, a sub-species of Mountain Beaver is only found in a 24 square mile area around Point Arena.

History Note. Originally home to the Native American Pomo Tribe, the first European to “discover” Point Arena and give it a name was the Spaniard Bartolomé Ferrelo who named it Cabo de Fortunas (Spanish for “cape of fortunes”) in 1543.

A little over two hundred years later, in 1775, the cape was renamed Punta Delgado (narrow point) by lieutenant Juan Francisco de la Bodega y Quadra (commander of the schooner Sonora), part of a royal expedition chartered by the government of Mexico to map the north coast of Alta California.

However, by the late 18th century the common name among sailors for the point and town south of the point seems to have been Barra de Arena (sand bar) which in turn became Punta de Arenas (sandy point). This name was eventually Americanized into Point Arena.

Prior to the 1860s, Point Arena was one of many sites along this stretch of coast that utilized chutes and wire trapeze rigging to bring supplies to local residents while loading the small coastal schooners with redwood lumber, dairy products, hides and other exports destined for San Francisco and beyond.

Most of these ports were so small they were called dog-hole ports—since they supposedly were just big enough to allow a dog to get in and out. Dozens of these were built, and almost any small cove or river outlet was a prime candidate for a chute. Luckily, the captains of these schooners were masters of their art and were able to get out of places like Hard Scratch and Nip-and-Tuck.

Point Arena got its first store in 1859 and a real wharf in 1866. With a prime location, roughly 40 miles south of Fort Bragg and 110 miles northwest of San Francisco, Point Arena became the most active port between San Francisco and Eureka during the booming logging period of the 1870s (in fact at one time the cove had two wharves). Steam schooners like the Seafoam, Pomo and Point Arena made regular runs along the Mendocino coast.

Unfortunately shipwrecks occurred at the point at an alarming rate so a lighthouse was needed and the original Point Arena Lighthouse was constructed in 1870; this lighthouse was destroyed by the 1906 earthquake and later replaced.

Point Arena Hotel  — THE UNDERSIGNED, HAVING taken possession of the Point Arena Hotel, hereby requests the patronage of the traveling public along the coast, and will assure the that every effort will be made to please them in culinary, bar and all other matters pertaining to the good comforts of a hotel. The beds are renewed and the cooking department is supervised by Mrs. Jones. CALL AND SEE US. 563-tf     F. Jones

Point Arena — Located 40 miles south of Fort Bragg and 110 miles northwest of San Francisco… This was another town that boomed during the logging period and it became the busiest little city between San Francisco and Eureka. At the edge of town and just south of the point is a partially sheltered cove where a wharf has been constructed and where there is a U. S. Coast Guard lifesaving station. Fishing boats tie up at the wharf where there are hoists, scales and cleaning sheds. Ashore there is a large warehouse where fish are handled. A small fleet of trollers anchors in the cove during the season or ties up at the dock. The chief activity is salmon and albacore trolling but a few setline boats work out of this port. Occasionally trawlers unload sole, lingcod, and rockfish. A few crab fishermen deliver at the cove. All fish goes out by truck. For the past 20 years the catches at Point Arena have averaged 300,000 pounds per year with 940,000 pounds in the peak year, 1940. In 1947 the total was 840,000 pounds but by 1951 the catch had dropped to 34,000 pounds. The leading species have been salmon, lingcod, crabs, albacore, and rockfish.

Point Arena Letter — Nimrod wants a fish story, so here it is: A young man by the name of Chas. Minor was gathering abalone near Seal Rock recently, when hearing a splashing near by he picked up a spear that was handy and looking for the cause of the commotion, he saw a shark about four feet long after a twenty-five pound codfish. Finally the fish ran into a hole of water among the rocks, the shark following like a flash, and in a minute more a four-pronged spear was darted into his sharkship up to the socket. Then the fun commenced in earnest. Quicker  than thought the handle was twisted from his hand, and he jumped into the water to get hold of it again, but the shark turned on him and drove him out. In the course of half an hour the shark became exhausted in his efforts to rid himself of the spear, the young man succeeded in regaining his hold on the handle, and after a hard struggle landed the man-eater on the beach. He then speared the codfish, which made a New Year dinner for a score of persons.