On March 26, 1987, Point Arena had a celebration. On that date, a new pier was dedicated at the picturesque cove, located just down the road from the center of town. While state, county and city officials gave their usual speeches and congratulated one another, most locals eyed the yellow ribbon which stretched across the front of the pier and gave a sigh of relief; perhaps now things could return to normal. It was important for both the local economy and the social well being of the town.

A pier is important for Point Arena, and it has been for more than a century. In 1866 the first wharf was built to load logs onto coastal schooners. Later, by the 1880s, shipping was needed for industry and commerce; every Wednesday was “steamer day” when local farmers would ship their produce to San Francisco and travelers could embark on the one-day trip south. After a while, commercial fishing became the main activity. Local waters yielded a wide variety of fish and crab. The hub of this commercial activity was the cove. But people who work hard also need to relax so the waterfront area near the end of the narrow valley that led to the cove also became a social center for the town and was busy most nights.

All of this came to a screeching halt on the day of January 26, 1983. Three tremendous waves struck the cove, wiped out the pier and an adjoining fish house, and nearly destroyed the small restaurant near the entrance to the pier. For four years after this, commercial fishermen and sportsmen would head south, to Bodega Bay, or north, to Albion and Fort Bragg, to launch their boats. A local pier fisherman named Ken Jones, based in nearby Boonville at the time, was left pierless and would need to journey to more distant venues to satisfy his pier addiction. During this time, the cove and the town would experience an easier and gentler life. But who really wanted it?

This was not the first time the pier was destroyed, but it took one of the longest times to rebuild. The pier was a private pier owned by Edward Sudden (since the 1940s), which was, because of the lack of a breakwater and almost annual damage, uninsurable. Although yearly repair and upkeep was possible, a total rebuild just wasn’t affordable. It was decided that if the public wanted a pier, they would have to find a way to fund the pier themselves. 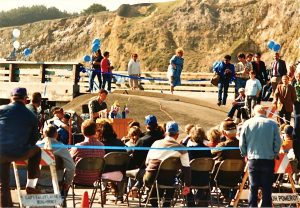 Although it wasn’t easy, public financing was found. Normally, the local government would fund 50% of the project and the state Wildlife Conservation Board would fund the other half. Here, there simply wasn’t enough local funding to pay for half of the project. Although it was a long and tedious task, local leaders scrounged every available source and finally found the resources. The city came up with $250,000, which was matched by the Wildlife Conservation Board, and then additional money was obtained from the California Conservancy, DBW, and the Economic Development Administration (since the launching of commercial boats would be one of the main uses of the pier). Once funding was arranged, various contracts had to be drawn up, and then the work itself had to be finished. It was, and a sparkling new pier was ready for dedication.

The 330-foot pier, built at a cost of $2.2 million, was a radical change from the former all-wood wharf. Built of concrete and steel, with a surface 25 feet above the water, it embraced the newest pier-building ideas, ideas conceived during the disastrous 1983 storms that smashed into and damaged many of the piers along the coast. Fears that boats would be unable to be launched from the new sling were found to be unwarranted So, too, have been the fears of some pier anglers who scoffed at the idea of bringing fish up from such a distance. 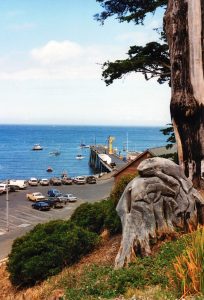 Environment. The wharf sits in the Point Arena cove. Point Arena itself juts out to the west and is, in fact, the closest point in the contiguous 48 states to Hawaii (2,283 miles to Honomu, just north of Hilo, Hawaii). Two deep-water, submarine canyons, the Arena Canyon and Navarro Canyon, begin directly out from Point Arena, a fact that helps explain the rich marine waters and excellent fishing. The Arena Canyon is the more famous, it begins about 11 miles west of Point Arena and reaches a depth of over 5,200 feet. It’s  home to extensive deep-water coral forests and fish including the mysterious blob sculpin.

The cove itself sits southeast of the point and is protected somewhat from northwest winds and storms; water depth is from 20-100 feet deep. The shore line is covered with rocks and the entire cove has a rocky bottom with no sand or gravel. Point Arena Creek runs into the ocean to the left of the pier and there are reefs both to the south and north of the pier. 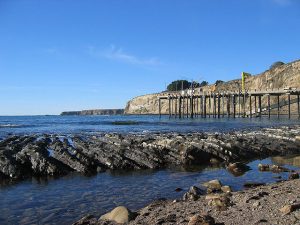 Unusual species include large buffalo sculpin, wolf eels, and an occasional octopus (the harbormaster at the pier reported on a 50-pound octopus). The capture of that creature was quite a feat and included the help of four anglers using a crab net to bring the “big eye” up to the pier). Apparently even a few great white sharks are in the area. In March of 1997 fishermen were startled to see the carcass of a baby great white shark floating in the water by the pier. The four-foot-long creature was grabbed by a couple of interested kids. 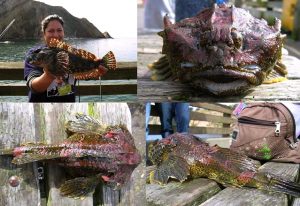 A Cabezon and a gnarly looking Buffalo Sculpin

Fishing Tips. The main fishing effort here is for striped seaperch, kelp greenling and rock greenling; both of the latter are usually referred to as seatrout. Bait and tackle is the same for all three, use size 6 hooks with a high-low leader or tie the hooks directly to the line. Best bait is shrimp (small pieces) followed by fresh mussels or pile worms. This same rigging and bait will also attract a variety of rockfish. All of these fish can be caught year round, but perch fishing can be tremendous in the spring when they come into shallow water to spawn. All can be caught anywhere around the pier but inshore to midway out, on the south side, is usually the most productive area. If fishing is slow, cast to the reefs which run parallel to the south side of the pier. The reefs are reachable with a good cast, but also be prepared to lose a lot of tackle. 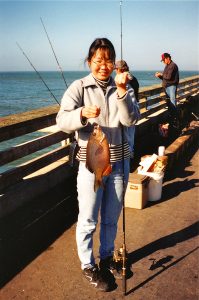 Our foreign exchange daughter Kimiko and a Striped Seaperch 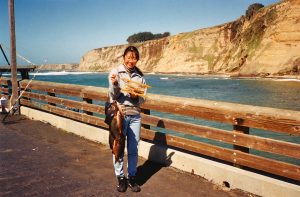 Kimiko and a springtime catch of striped seasperch

This is also a good pier for cabezon and there are a least two cabezon holes. The best bait for these is live ghost shrimp (but you’ll have to bring your own). Next best baits are small crabs (which you can catch on the shore), fresh mussels or pieces of shrimp. Many fisherman use abalone guts or squid and a few will be landed on these each year. 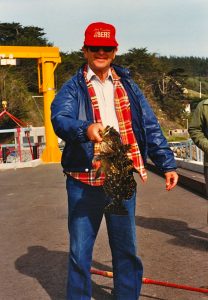 During the summer months you will often see schools of small fish in the water. These are generally surf smelt (day smelt) but at times there are also a few night smelt, jacksmelt, Pacific herring, Pacific sardine and even anchovies. These can be caught on a multi-hook leader for live bait or food although it takes quite a few of the smelt to make a meal. You can try live bait for salmon in the fall but make sure if you catch one that it’s a king salmon not a silver salmon. Historically, silver salmon would move into these shallow waters prior to entering local streams. Today silver salmon are an illegal catch so you need to carefully ID your salmon (and the DF&W Regs booklet shows how to identify them). Live bait can also entice the lingcod that like to hang around the pier.

Last but not least is the silver and walleye perch that are often present in the spring through fall months. Best bet for these are small size 6 or 8 hooks baited with small pieces of anchovy and fished mid-depth. 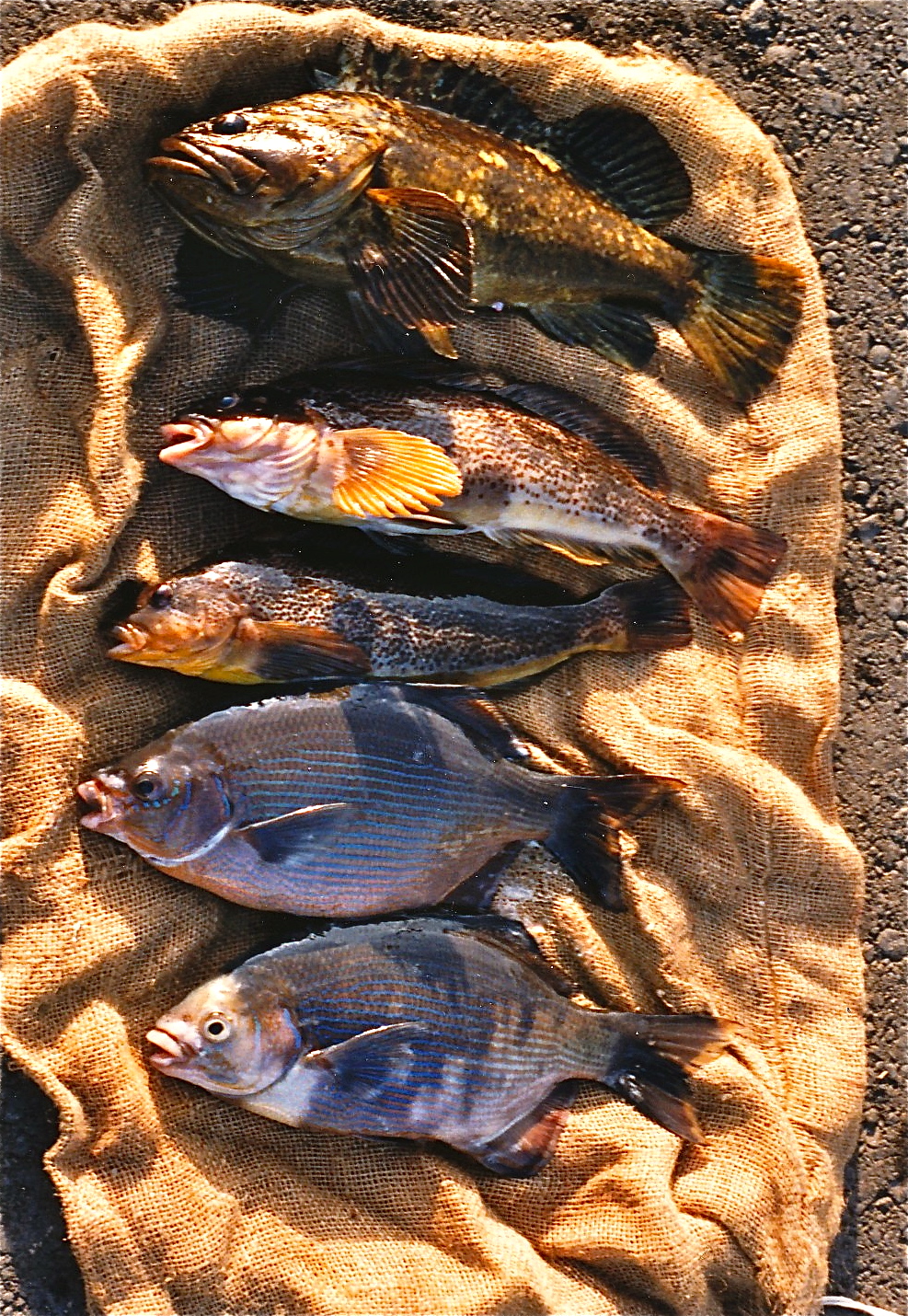 Special Recommendations. (1) Make sure you always bring warm clothing with you to this pier. Point Arena is one of the windiest points on the coast. It’s easy to take off a jacket; it’s not easy to put one on if you didn’t bring it. This pier is also heavily used by both commercial and skiff fishermen. Skiff fishermen use it to launch their boats. Commercials use it to unload their catch of fish, crabs or sea urchins onto the pier and to get supplies, such as ice or gas. This means there are many trucks on the pier, so always be careful to stay out of their way. Also, be careful to not hit anyone as you are casting; remember the underhand cast. The commercial activity means that boats are often tied to the pier in spots you wish to fish or come into water you are trying to fish; be cautious and remember that without this mostly summertime hazard, there wouldn’t be a pier.

(2) Be sure to bring a net or gaff! One day two of my students, John Gowan and Antonio Soto, decided to visit the pier. Following my suggestions, they brought shrimp as bait and were soon fishing in the shallow waters near the inshore rocks. Almost immediately, Antonio had a savage hit from a large fish. Soon after, the still feisty fish was hauled to the top of the water. It was a ferocious looking wolf-eel, one that was a little over 4-feet-long. John and a large group of people watched the battle but there was a problem, since neither John nor Antonio had brought a pier gaff or a net. There were no shortages of suggestions from the onlookers but finally the pier attendant offered to help. A small hoist, usually used to lower and bring up dinghies, was fitted with a fish basket, and then it was lowered into the water. After the eel was brought into position above the basket, it was hauled to the top of the pier. On deck, everyone gave congratulations, a few snapped pictures, and Antonio and John thanked the pier attendant for the help. A few hours later John called and asked, “how do I cook this darn thing?” Remember, always bring a net or treble hook gaff with you. 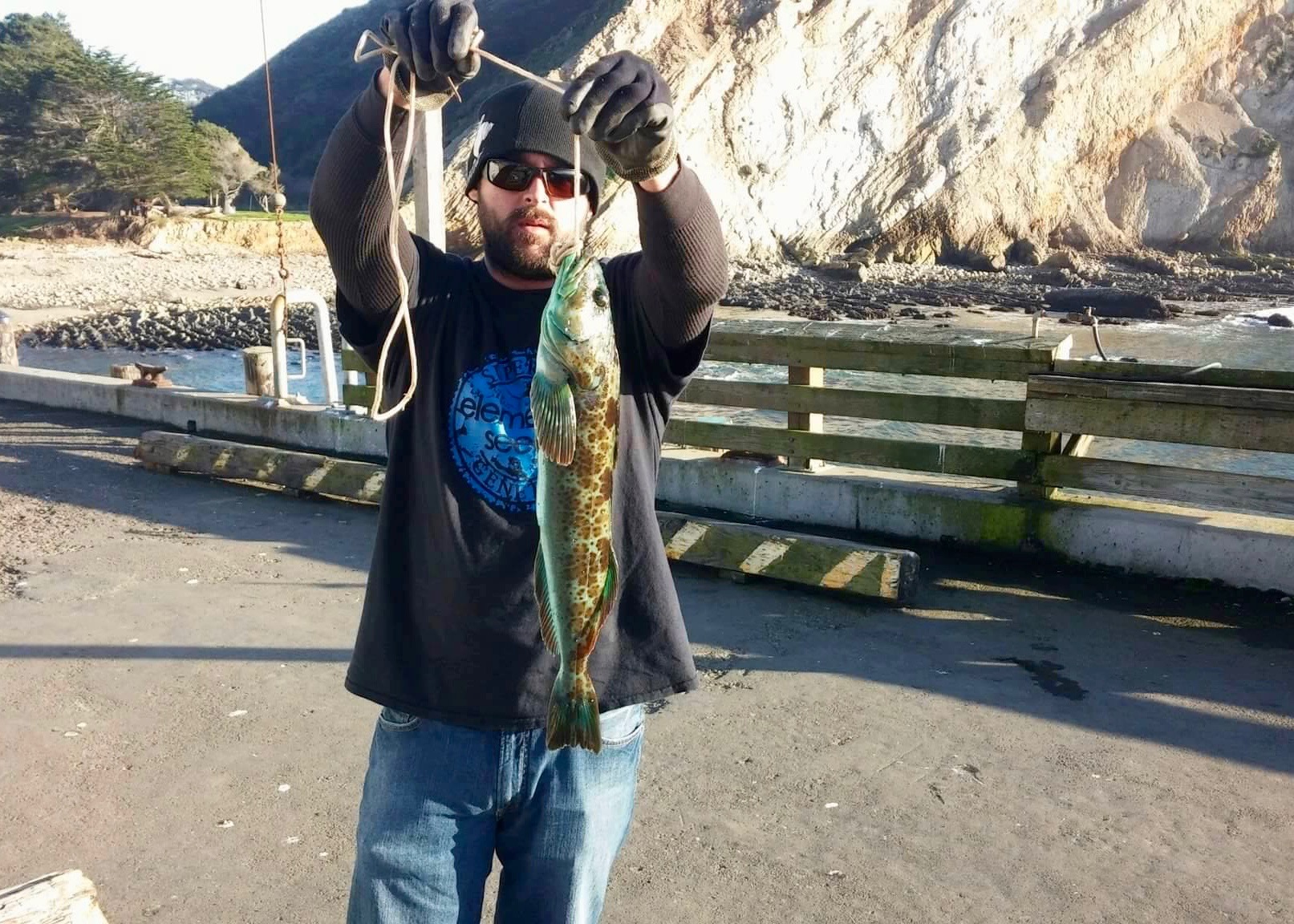 Lingcod caught from the pier by Kell

(3) Expect the unexpected. One late September day, more years ago than I care to admit, I was fishing with limited success (a few seatrout) when I spotted baitfish breaking the surface of the water. Deciding to catch some live bait, I rigged up a multi-hook Lucky-Lura leader and cast it out. A couple of turns of the reel handle, a quick jerk, and I was hooked to a SALMON. Since the leader had size 12 hooks, and a light line, I knew my chances of landing the fish were slim but nevertheless I played the fish carefully and finally got it up next to the wharf. It looked like a silver salmon; about 8 pounds in weight. Unfortunately, the tiny hook, last one on the leader, was just barely caught in the tip of his mouth and about the time he spotted the pilings he decided he had given me enough thrills for the day. He made a sharp turn, the hook pulled out, and a salmon dinner became seatrout fillets (which weren’t too bad).