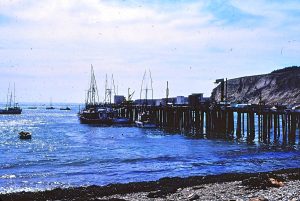 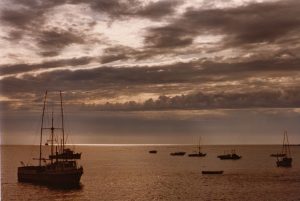 Boats moored near the pier

In the years since 1866, Point Arena has seen several wharves, testimony to the killer storms (primarily from the south) and waves that periodically thrash the cove. The storm in 1983 was only the latest but it ended the life of the old pier and resulted in the building of a completely new pier in 1987, a pier that hopefully will be better able to weather the storms.

Thousands of coast residents remained without power this morning in the wake of wind and heavy rains from the winter’s roughest storm, but damage was light throughout the inland areas of the county… Point Arena, at the county’s southern tip, was the hardest hit. Waves, wind and localized flooding caused the collapse of two buildings near the water at Point Arena Cove and smashed through the front windows of the Cove Café.

Eight people were caught inside the restaurant and its rear buildings when the high water struck, but all were rescued without injury. “My little boy was trapped,” Betty Moran said. “I floated around and started screaming for help. I was afraid that another wave would come and force them to leave me.” “I was in the building taking a shower when it happened,” said Dori Fox, daughter of the restaurant’s owner. “I was standing in there looking out the window like I always do and then I saw a wave coming eye level.” “I’ve never been so scared in my life. The water was coming in all over — under the door, up the drain. I got out of the house, and people were running all over screaming.” Fox, 26, said she had lived there all her life and never seen such high surf.

Along with the destroyed boathouse and outbuildings, raging seas demolished much of the Point Arena Cove pier, built during the last century to load timber ships… 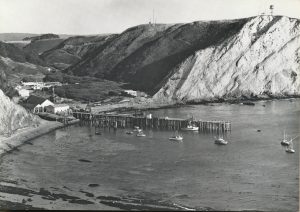 The pier before the 1983 storm 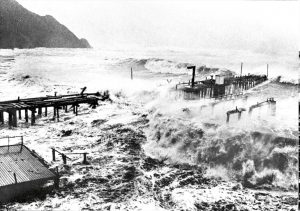 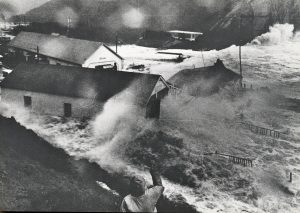 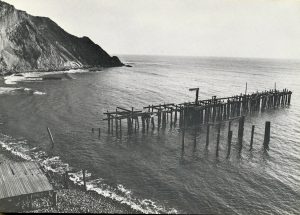 Only pilings were left after the storm

Today the nearest oceanfront pier to the north is at Trinidad, a nautical distance of 131 miles. Such was not the case back in the late 1800s. There were a number of true wharves along the Mendocino and Humboldt coasts including those at the Navarro River, Albion, Little River, Caspar, Noyo Harbor, and Fort Bragg (where C.R. Johnson built a wharf at Soldiers Harbor Cove in 1885). To the north was Roger’s Wharf at Westport (which was called Beal’s Landing in the 1860s and Westport after the late 1870s). Eventually Westport had two wharves. Further north, a wharf was built at Rockport in 1876 by W.R. Miller; at the time it was built it was claimed to be among the finest on the coast. Bear Harbor had its own wharf until it was washed away by a tidal wave in 1899. Across the county line, in Humboldt County, a 900-foot-long wharf was built at Shelter Cove in 1886.

Smaller dog-hole ports (which generally had a chute, sometimes a modified type of wharf, but rarely a true wharf) came and went depending on the health of their lumber mills. Still remembered were those at Iversen’s Landing and Saunders Landing, which were south of Point Arena. Rollerville (near the Garcia River), Greenwood Cove (where Casket Wharf operated until 1929), and Cuffey Cove, were located south of the Navarro River. Mendocino, Cleone, Newport, Kibesilla, Union Landing, Juan Creek (McFall’s Landing) and Hardy Creek are/were all located in central to northern parts of the county still located on Highway 1. Usal, Northport, Little Jackass Gulch and Needle Rock were found in the territory that today is called the “Lost Coast.” Most of these date from the 1860s to 1880s and many today are just history. Although Humboldt and Del Norte counties both saw extensive timber operations in the late 1800s, most of their movement of logs was done by railroad.

Although stories of people fishing on the wharves are to be expected, what is really interesting are the stories of fish caught off the chutes. The chutes weren’t always as safe as wharves, but some people, especially kids, would hardly be stopped just because there was a little danger. 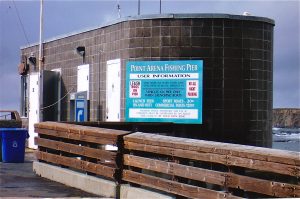 Pier office and restrooms that have showers

Handicapped Facilities: Handicapped parking and handicapped restrooms. The pier surface is concrete and the railing is 40 inches high. Not marked for handicapped.

How To Get There: From the south, turn left from Hwy. 1 onto Iverson Ave., which will turn into Port Rd. Simply, follow the road to the pier. From the north, turn right onto Port Rd. and follow it to the pier.