Musical videos have also chosen the cove and pier as home. A Paris Hilton music video was filmed here (she can sing?), as was the Britney Spears video Sometimes in 1999. Doesn’t it just give you goose bumps and make you proud that Britney chose the pier as the site for her video? Of course there’s a long connection to music—Paradise Cove was on the album cover of the Beach Boys’ Surfin’ Safari.

In this same vein was a contact I made in 2006 while at an Outdoor Writers Association of California (OWAC) conference in Bishop. I had the pleasure of meeting a new member, Harry Medfed, and receiving an autographed copy of a book just published. The book was a guide to places in California used in movies and how to visit them. Of course we soon were talking about piers used in movies and exchanging information. The following section is from that book.

“The Paradise Cove Pier is a rickety, wooden structure built in 1945, often used by filmmakers searching for evocative seaside flavor. In 1952, it was the site of a Nantucket barbecue in the Cheaper by the Dozen Sequel, Belles on Their Toes, with Myrna Loy, Jeanne Crain, and Debra Paget. Robert De Niro takes Ingrid Boulting here for an outing in The Last Tycoon, where they meet local salt Seymour Cassel and his pet seal. The pier figures prominently in the opening flashbacks in Indecent Proposal, where Woody Harrelson proposes to Demi Moore. They are reunited on the pier in the moody fog-enshrouded finale.

For American Pie 2, production designer Richard Toyon re-created a Lake Michigan retreat, complete with beach house, sailboats, Midwestern flora, and a lakeside lighthouse (erected on the pier’s edge) where hormonally charged hero Jason Biggs almost gets lucky with Shannon Elizabeth. And in House of Sand and Fog, the pier plays a dramatic Northern California locale where Jennifer Connerly and Ron Eldard get to know each other over lunch.”

<*}}}}}}}}}>< — Did you know that Bob Dylan played the role of Alfred, the chauffeur, in the 1999 movie Paradise Cove? Based upon the movie’s reviews, sounds like you shouldn’t waste your money renting the “film noir” movie it even if you are a “Bob” fan. It’s that bad. Nor should you mistake it for the equally bad 2008 horror movie Paradise Cove.

History Note. The cove was once the site of Sumo, one of the largest Chumash Indian villages in California. Given protection by Point Dume, and presented easy access to the Channel Islands, Sumo became a major center for both fishing and trade. Archeologists who have studied the site feel it was populated as far back as 8,000-9,000 years. The cove contains a cemetery dating back 7,000 years and is considered a sacred burial ground of the Chumash Indians.

As with every area along the coast, the cove was eventually taken over and claimed by Spain, before becoming Mexican and then Californian. The cove apparently was used as a port for some of the early “American” settlers in the area and became one of the areas through which the “Hueneme, Malibu and Port Los Angeles Railway” would run. Traces of that rail line can still be found adjacent to the Mobile Home Park Clubhouse. The cove became a favorite spot for picnics as well as fishing

The private cove has long been a favorite spot for locals, a place for picnics and fishing, as well as a haven for nude sunbathers and movie stars. In the 1940s the Marblehead Land Company subdivided the area creating the Malibu Riviera’s #1-4. The lower area, by the beach, was owned and initially developed by Frank Wilson and Al Camp. They oversaw the construction of a clubhouse (that eventually became the Sandcastle Restaurant) and a laundry/restroom building. However, their plans for additional development was stalled during the World War II years and in 1945 the property was sold to Bill Swanson

With the end of the war that year, Swanson soon began to finish the development of the area, including the trailer park that still sits just up the road from the beach. To attract “trailerists” he also built a number of attractions, most that would seem pretty tame today. Most of his early ads concentrated on the “trailer park” aspect of his property. 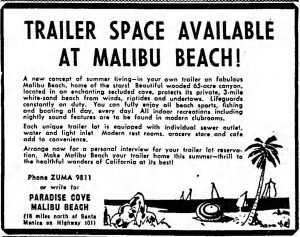 An ad in the Palm Springs Desert Sun in April 8, 1949 tried to attract desert dwellers: 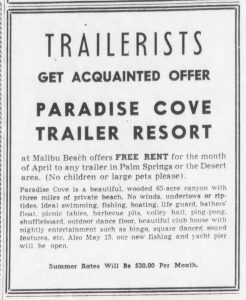 Another ad, from 1948, offered Trailerists a get acquainted offer at the Paradise Cove Trailer Resort

At the same time, Swanson began to focus attention on Paradise Cove as a recreational center.

On July 22, 1949 the following appeared in the Los Angeles Times:

Most important for our story was the construction of a pier in the cove. History isn’t clear, was it eventually an 820-foot-long pier or a 600-foot-long pier? What is clear is that it, like most piers, suffered occasional storm damage that required repair and modification over the years. Nevertheless, the pier has continued to grace the cove’s waters since 1949.

Comes now a new sailing roadstead for Southland skippers—Paradise Cove, 16 miles north of Santa Monica. Since last summer Sabot dinghy sailors of the Malibu Yacht Club have raced there. This week however, Bill Swanson announced construction of a 400-foot pier.

In the early ‘50s, the cove was purchased by Joe Morris who himself sold it a decade later. Morris developed the pier into one of the main centers for Sportfishing in the area and offered up a variety of fishing opportunities: full day boats, half-day boats, and barge fishing (the Buccaneer, Lady Luck and Paradise). Both a tackle shop and small snack bar were found out toward the end of the pier.

Also Our Pier Has Facilities For Private Boat Launchings. Up to 16 foot and 800 Lbs. 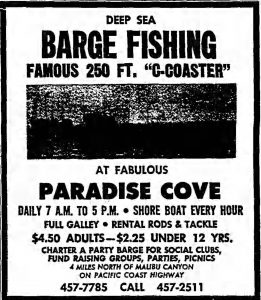 Joe Morris’ son Robert spent part of his youth working in his father’s sport-fishing business. Years later, after becoming one of LA’s most successful restaurateurs (26 restaurants including his most famous—Gladstone’s), he would return to the cove.

On my first visit to the cove, in the late ‘70s, I was presented a quite different picture from the one a person sees today. The restaurant my wife Pat and I visited, the Sandcastle Restaurant, had a Cape Cod décor with thick red leather booths and a traditional, non-hip LA menu. The food was good and reasonably priced. 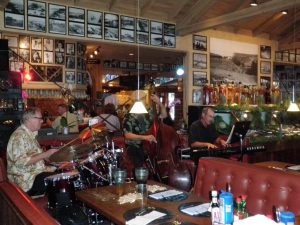 As for the pier itself, it was fairly long and was home base for the Paradise Cove Sportfishing fleet.  Boats included the half day boat Speed Twin and the all day boat Gentleman. Lined up in a neat row on the deck of the pier was a fleet of rental skiffs. 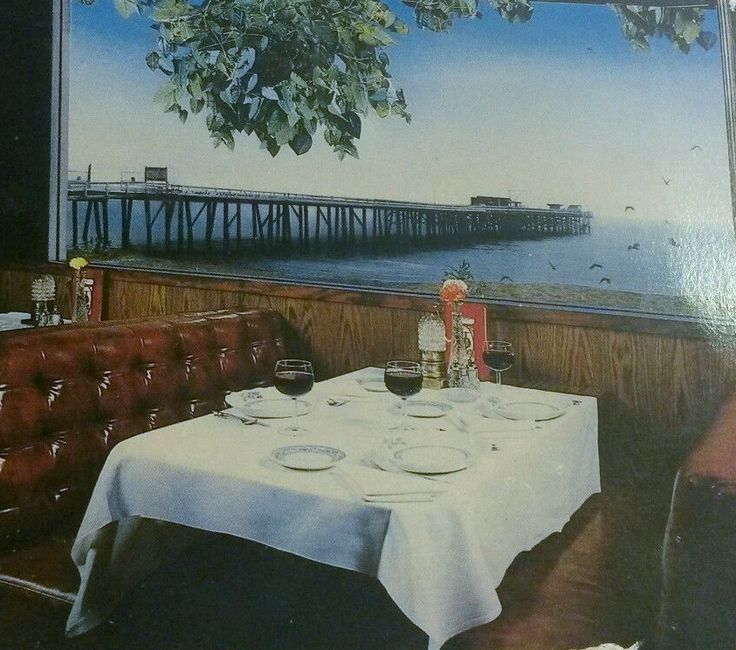 The 600-foot-long length of the pier mentioned in 1983 appears to have been a result of storms prior to that year. However, the El Niño storms of 1983 destroyed much of the remaining pier (roughly two thirds) and brought an end to the deep sea fishing operation as well as the bait barge and the (reported) 87 sea lions that used it as a home.

Little change has taken place at the pier since those storms of ’83. The pier is still short but has been strengthened and spruced up with fresh boards and paint. On shore, the Sandcastle Restaurant has been replaced by the Paradise Cove Beach Café, a creation of Robert Morris who did indeed return to the area where he had spent so much of his youth. 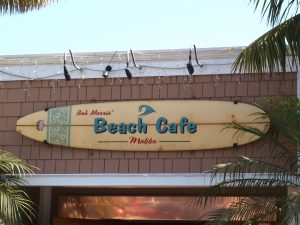 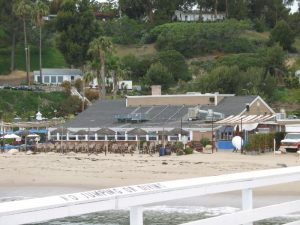 Given the past history of this pier, and the excellent fishing that can take place, it is hoped that sometime in the future this pier can be reconstructed to a longer length. Although open until 2000, it was closed for a period of time between 2001-2006. It is now open but, as mentioned, is still a ghost of its former self.

Facilities: A paid parking lot ($25) greets visitors to the cove although there is parking validation at the Paradise Cove Beach Café near the beach; buy $20 worth of food and the admission drops to $3. Although somewhat pricey (Fish & Chips approx. $18), the food is good and the portions generous. It is possible to park for free out on PCH, and walk down the mile-long access driveway, but you will stay pay a walk-in fee ($5 per person last time we checked). There are restrooms in the restaurant and near the beach but basically no facilities on the pier itself.

How To Get There: Take Highway 1 to Paradise Cove Dr., turn west, and follow the road back into the parking lot.