Phoenix Rising, what more needs to be said? Too often when piers have been vandalized or burned down that is the end of the pier. And it’s what I thought would happen to this pier when it burned down in 1998. However, the pier, sometimes called the Mission Rock Pier, was rebuilt by the Port of San Francisco and is, as they say, as good as new (if you don’t mind the graffiti and seemingly lack of maintenance to the park and pier). Good thing because the small size and surrounding environment of this pier are somewhat deceiving. 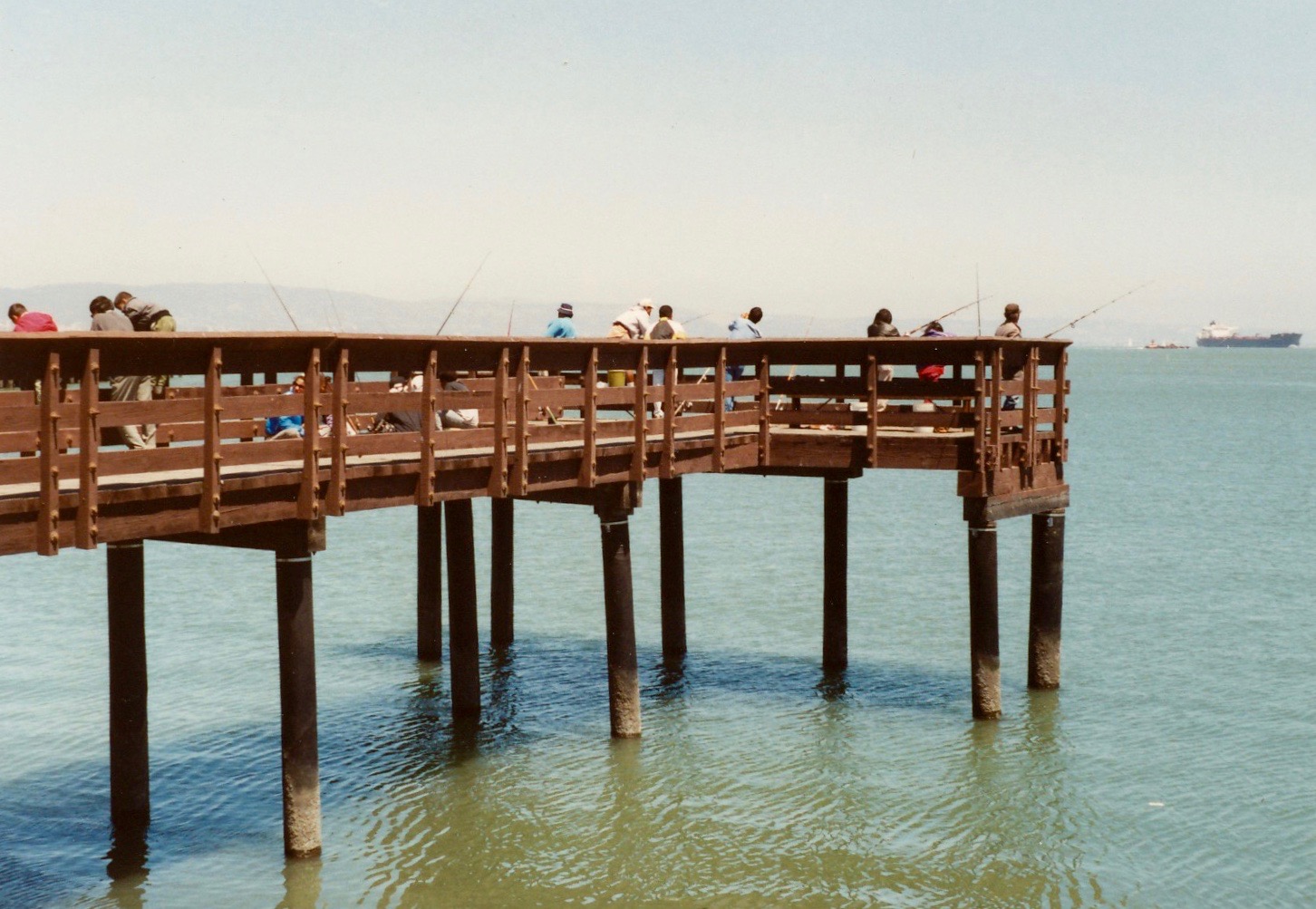 Before fire destroyed this small 80-foot-long Central Basin pier, this was a destination for a small but steady group of anglers. Although for the most part fishing is only fair from the pier it one of the better piers, weather wise, in San Francisco. On one of those June days when the fog and cold have descended on “The City,” this spot can offer (sometimes) a little bit better weather.

Environment. To the left are rotting pilings. To the front right are huge ships under repair at the Bethlehem Shipyard, and to the far right sits a small marina. 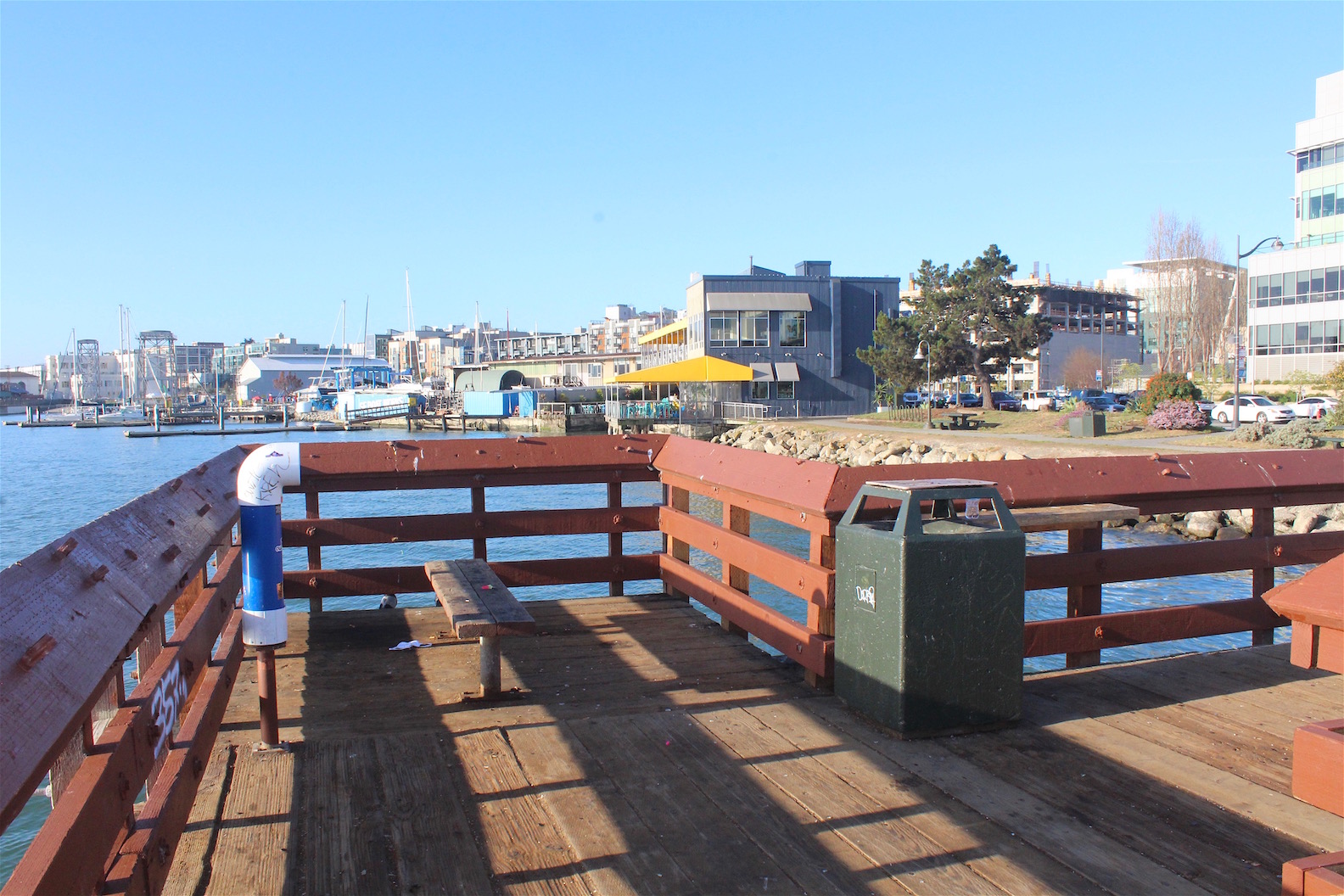 Across the street sits the beautiful Oracle Arena home to the NBA’s Warriors. To its side sit new high rise building, all a start contrast to the bayside of the street and its view of older, more industrial structures. 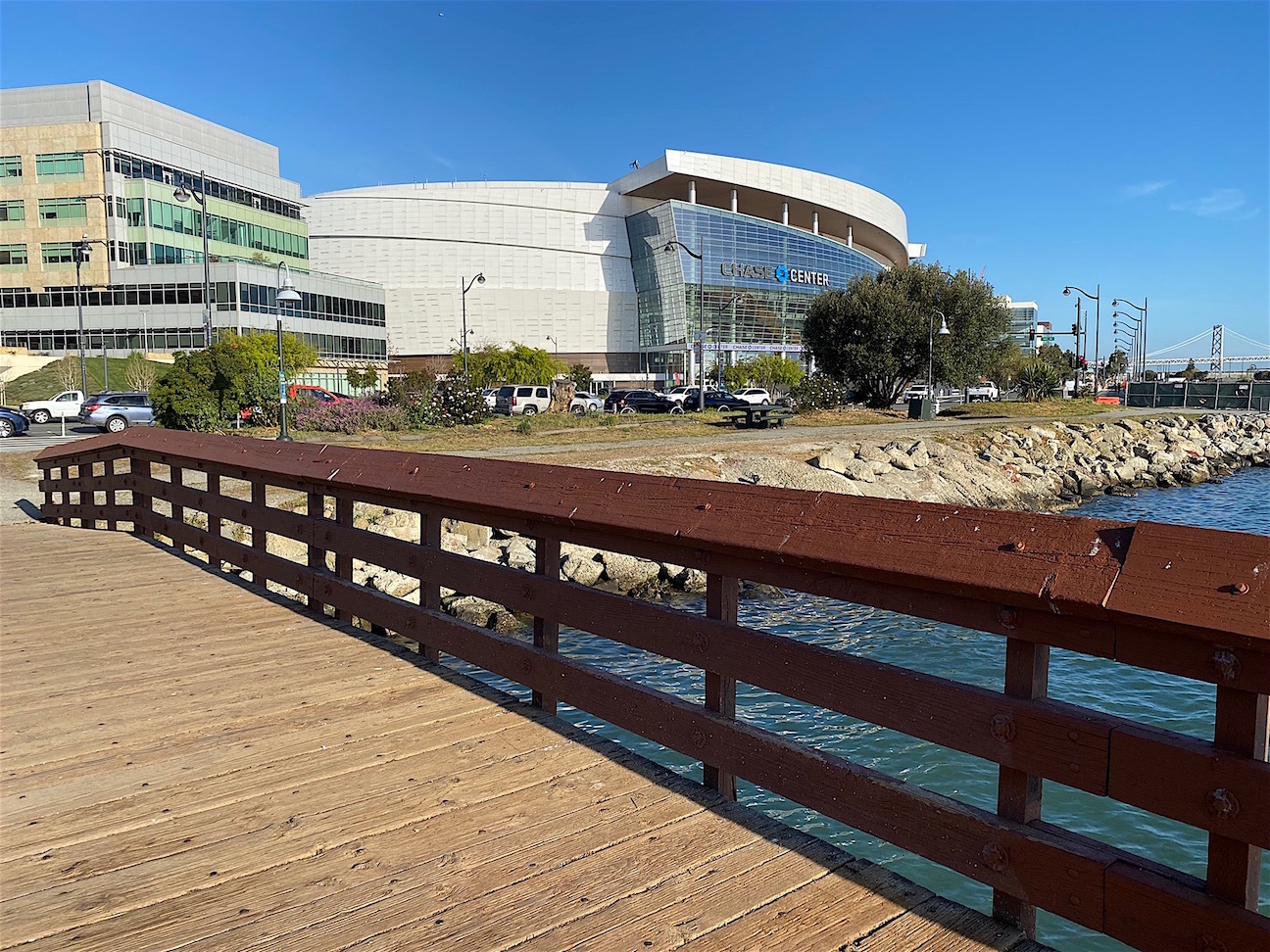 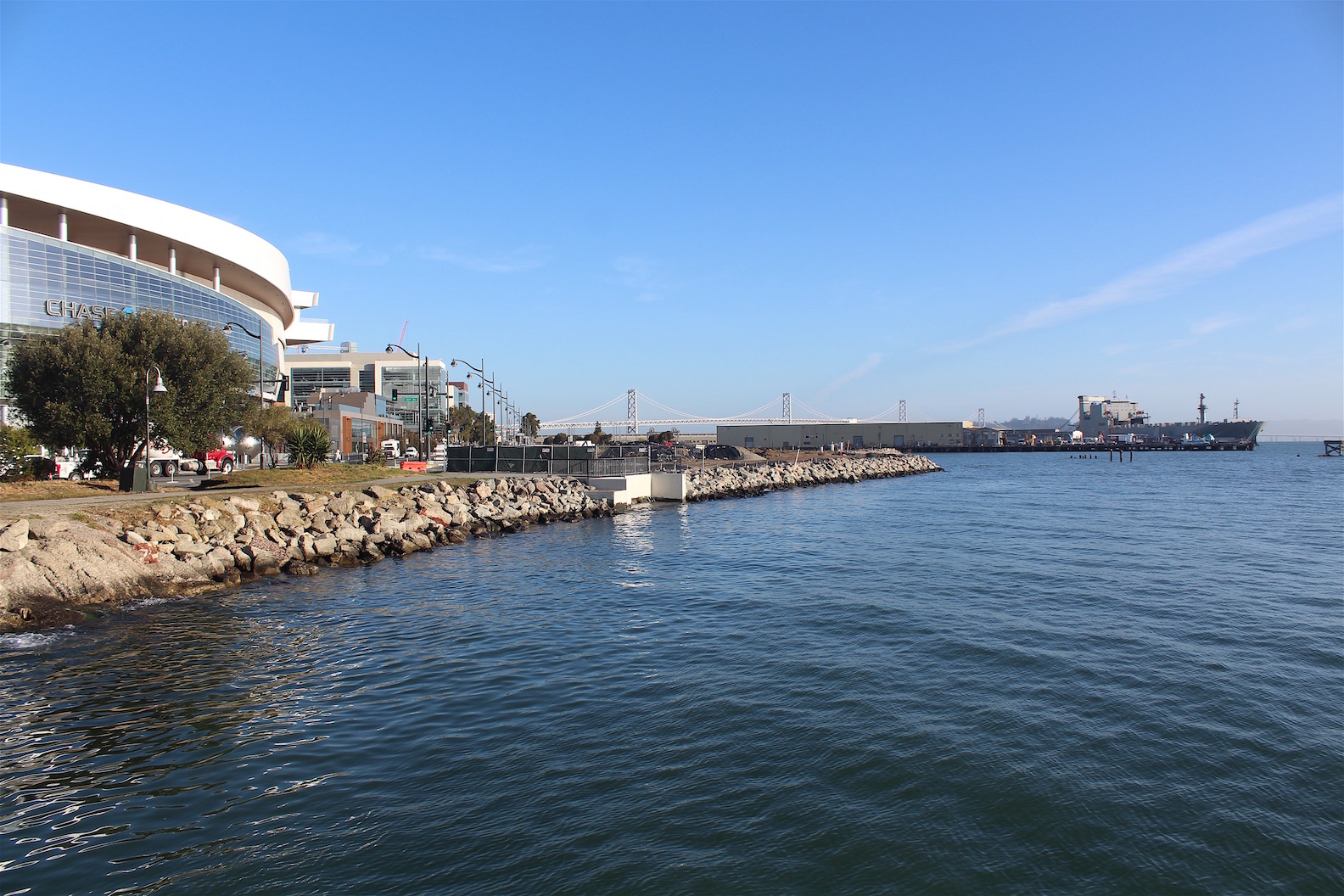 The shoreline is lined by rocks while the pilings are covered with barnacles but only a few mussels. The result is better-than-average perch fishing, especially for black seaperch. It’s also a pier that yields quite a few small rockfish, mostly brown rockfish. Besides these two species, the fish caught most often here are white croaker, jacksmelt, sharks, skates, bat rays and a few striped bass.

Crabs can be so numerous they are a nuisance to anglers during the summer months; but that also means it’s an excellent area for crabbing, rock crabs and red rock crabs, during those same months. Just remember that while rock and red rock crabs are legal, it is illegal to keep any Dungeness crabs caught in the bay. 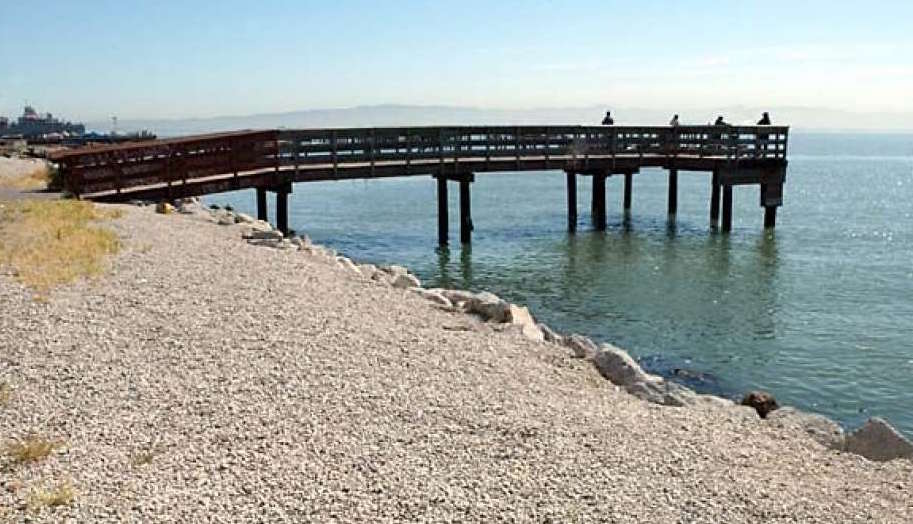 Fishing Tips. Two totally different types of fishing opportunities are presented to the angler at this pier. Most common, is to cast straight out from the pier. Fishing on the bottom in the deeper waters yields white croaker (kingfish), brown smoothhound shark, leopard shark, and an occasional striped bass or bat ray.  In the winter months you may also see a few starry flounder show up. Casting straight out, but fishing on the top, yields scrappy jacksmelt. Pile worms and strips of anchovy works best for the white croaker and starry flounder while squid is best for the various sharks and rays. Live bait, such as a small shiner or bullhead, is best if seeking striped bass; small shiners and smelt will attract halibut. Grass, ghost or mud shrimp also produce a few striped bass and may sometimes attract a halibut or sturgeon.

A second method of fishing is to fish around the pilings, or inshore around the rocks, for perch and a number of other small fish. Light or ultra-light tackle provides a lot of fun if you don’t mind battling the smaller fish. The piling area primarily yields black and white seaperch, pileperch, walleye and silver surfperch, shinerperch, and both brown and kelp rockfish. A number of different species of small fish are found around the rocks. The number one fish is probably black seaperch (often called pogies), but you can also catch rainbow, striped and rubberlip seaperch, striped kelpfish, brown rockfish, kelp rockfish, cabezon, and a variety of gobies; at times these small fish seem to almost infest the rocks along the shoreline. 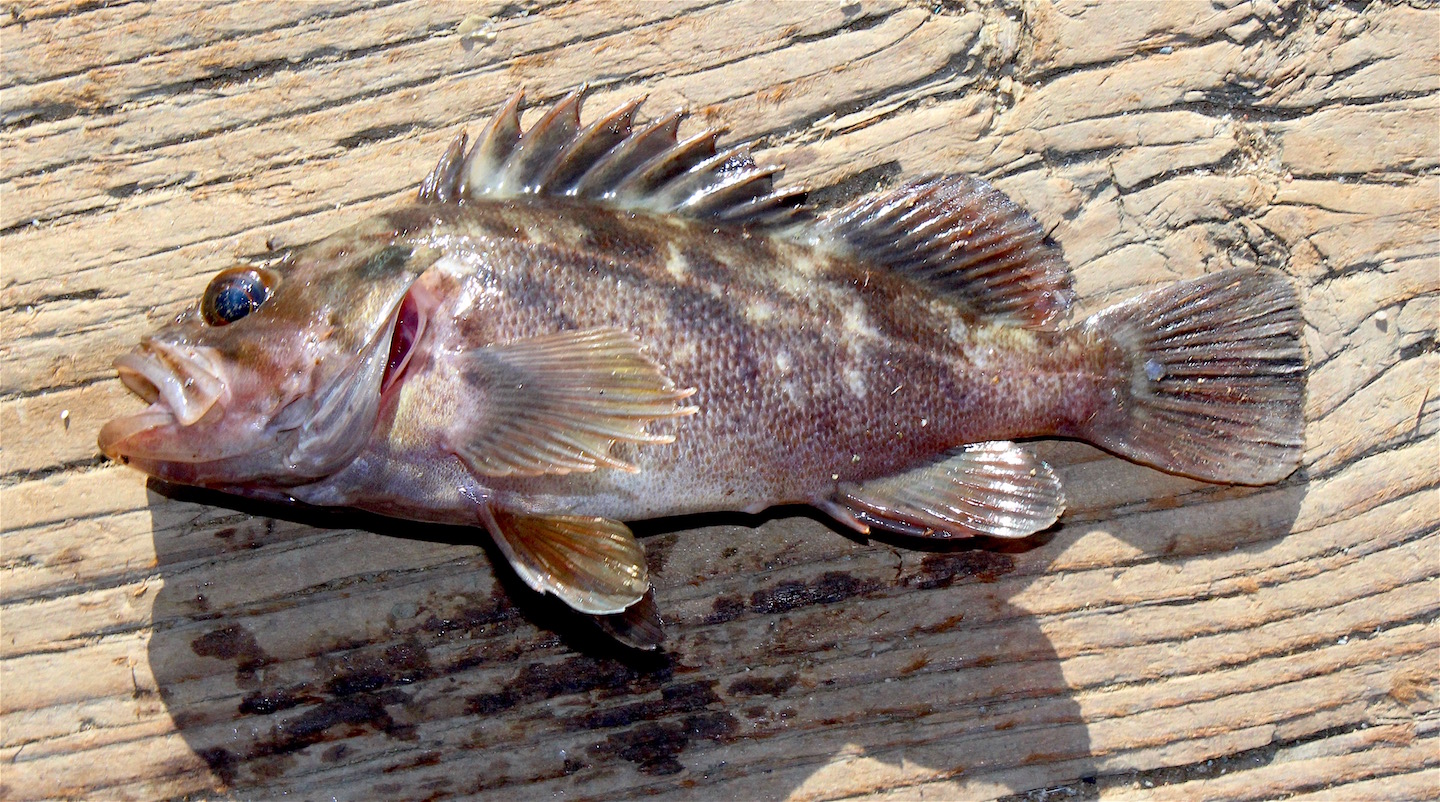 The pier can be good for sharks (brown smoothhounds and leopards) and bat rays, especially at night. However there are a couple of drawbacks. The first is the numerous number of old pilings found around the pier. It can be easy to hook fairly large sharks and rays but quite another thing to keep them away from those pilings. The other drawback is the characters that sometimes inhabit the area at night: a contingent of clochards some of which may act in a truly doolally (and menacing) manner. Never fish here at night unless you are part of a group.

The pier has also proven to be a steady producer of Pacific herring when the small baitfish decide to enter the bay during winter months. When they show up the word goes out, anglers with cast nets show up, and elbow-to-elbow casters line the railings of the small pier. 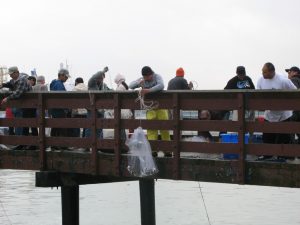 <*}}}}}}}}}>< —February 2010 — DF&G fish counter Kirk Lombard sent me a note that said “some perch have been reported from the pier, especially when there’s an early morning incoming tide (one angler nabbed 20 pileperch).”

<*}}}}}}}}}>< —  An interesting catch from the pier in December of 2008 was a baby Pacific electric ray (Torpedo californica). However, it was not caught by rod and reel but in a throw net being used to catch herring. When pulled in the angler (friscostriper415) he at first though it was a starry flounder and then, when he got it to the pier, thought it was a thornback. But no, it was a young electric ray only about a foot in diameter, a small size but still able to able to deliver a strong shock. Luckily, even though he handled it, he had rubber gloves on his hands and did not receive a shock.

Another unusual catch, at least for a Bay Area pier, was a lizardfish that were reported from the pier in 2016.

History Note. Central Basin has been an industrial area since the mid-1800s. Most impressive was the Union Iron Works that built numerous iron-hulled men-of-war and steel steamships between 1884 and 1906. Today, the Bethleham Shipyard sits on the same site.

Facilities: Virtually none other than the pier itself. There are two benches and a single trash can  but no lights, cleaning stations, or similar amenities that are available at most piers. At times there have been adjacent portable toilets; on my last trip even these were not present. There are a couple of picnic tables set up near the entrance but the last time I was there they were occupied by homeless people sleeping—on top of the tables. Parking is available on the adjacent street although the signs say 2 hour parking—from 10 A.M. to 10 P.M., and no parking from 12 A.M. to 6 A.M.

Handicapped Facilities: None. The pier is wood planking and the railing is 42 inches high.

How To Get There: Take the Embarcadero south past Pacific Bell Park to Third Street. Turn left and follow the road to its intersection with China Basin Street and then turn right (south) to the park and pier.