The Pillar Point Pier is relatively tiny (extending only 33 feet out from the jetty rock) and sits off by itself to the far end of the main parking lot. It juts out into the outer harbor water, and its 60-foot-wide platform is used strictly for angling and crabbing (if you don’t count the look-a-loos out for a harbor stroll). 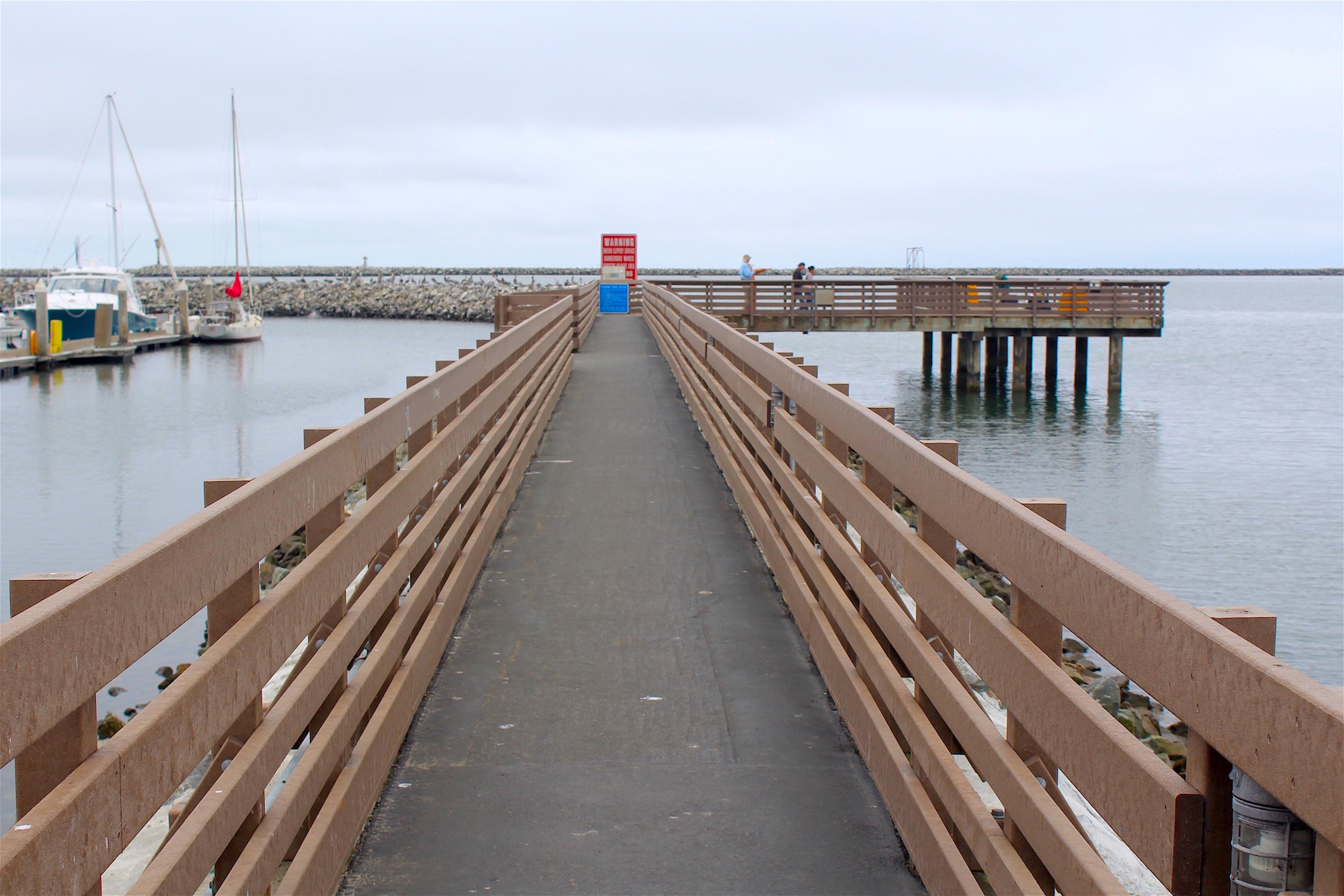 The walkway out to the pier 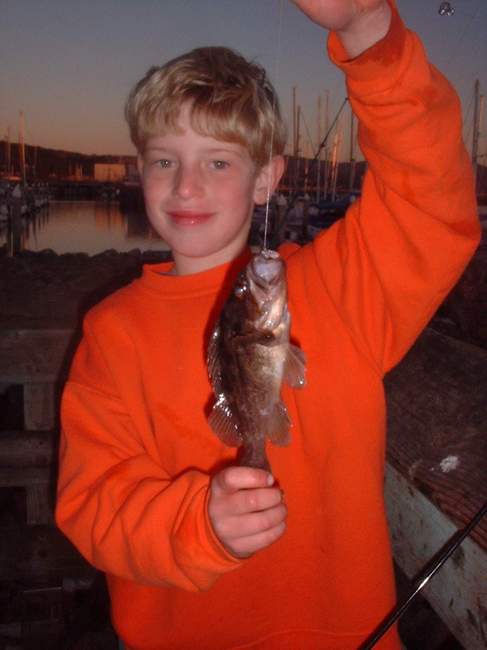 Environment. This pier offers availability to both rocky-bottom and sandy-bottom species. Water around the pier is calm, fairly shallow, and at times, full of fish—and crabs. 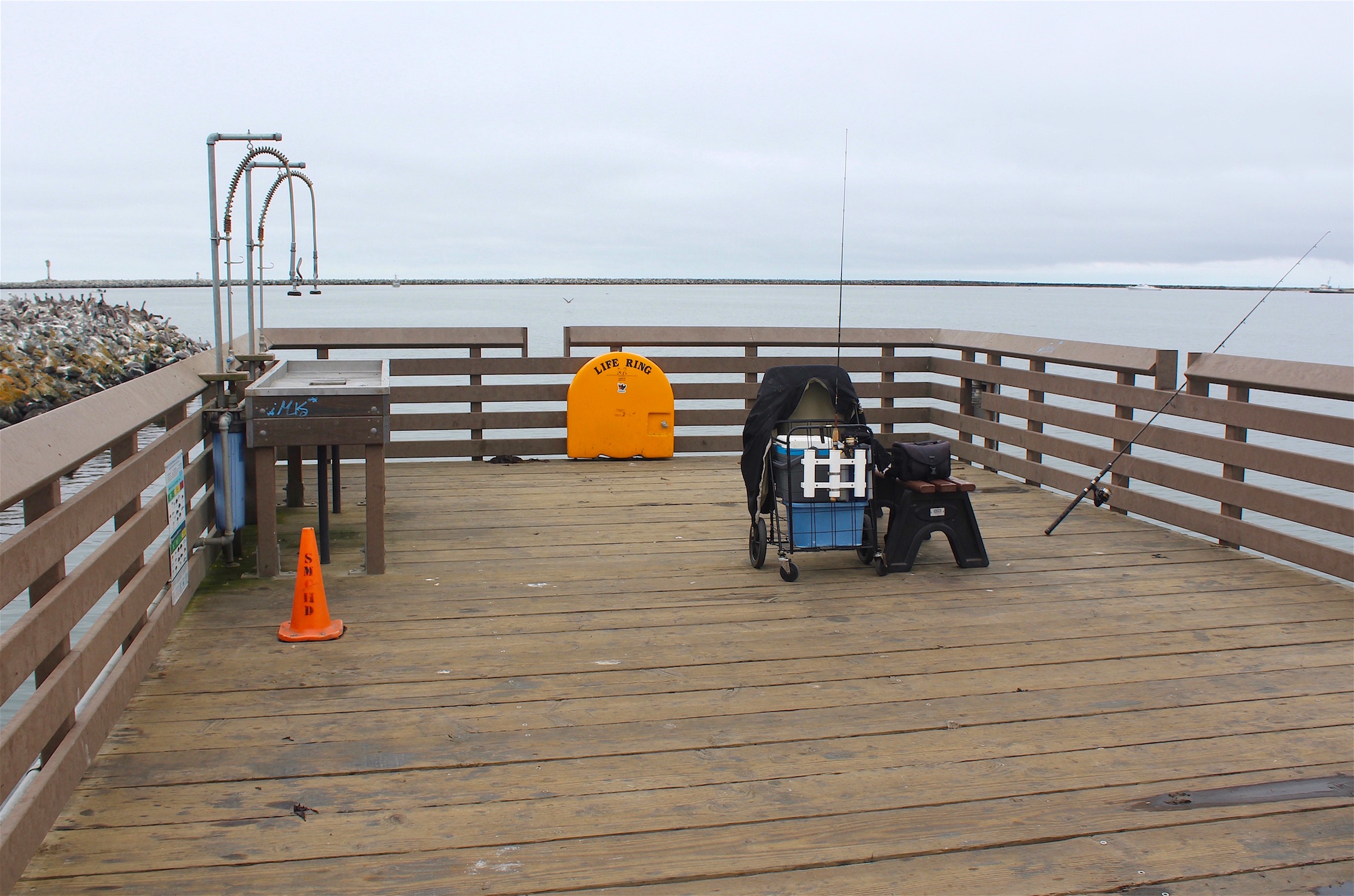 There are two benches and a good fish cleaning station

Due to the bottom conditions, sand and some mud with a little vegetation, the pier’s most common species of fish are white croaker, starry flounder, sand sole, several types of perch (including walleye, silver and white), jacksmelt, sharks, rays and way too many bullheads (staghorn sculpin). At least that is true if you cast out away from the pier.

But, as mentioned, the pier sits adjacent to a breakwater and its rocks. Thus the small pier will also yield up rocky-shore fish, although most are small due to the shallow waters around the rocks. The most common fish are rockfish and perch. As for the rockfish, brown, grass, kelp, black and blue rockfish lead the hit parade (although I caught a small gopher rockfish here one cold, cold April morning). 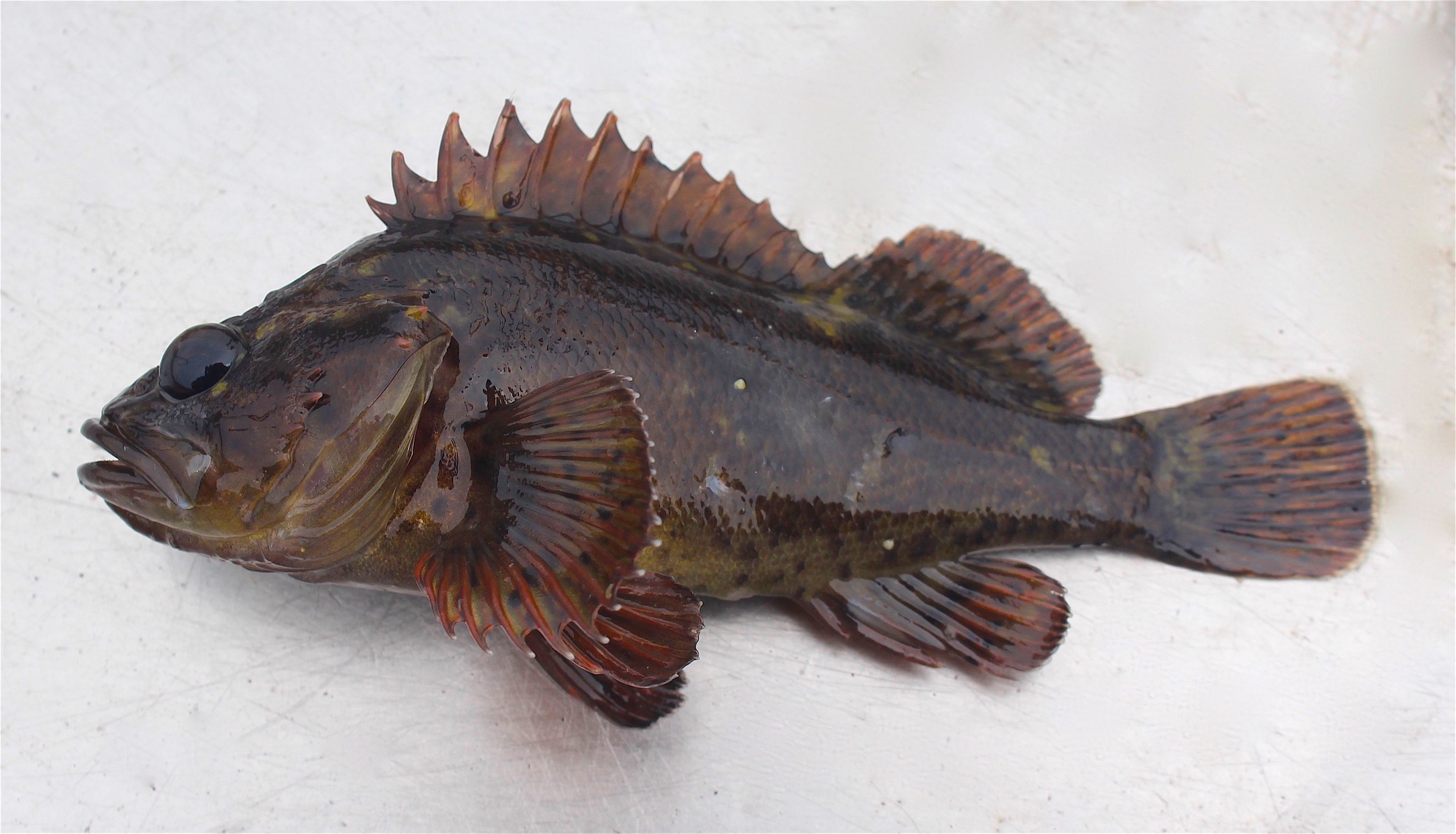 Perch fishermen will see a variety of perch led by black, striped, rainbow, and rubberlip perch. 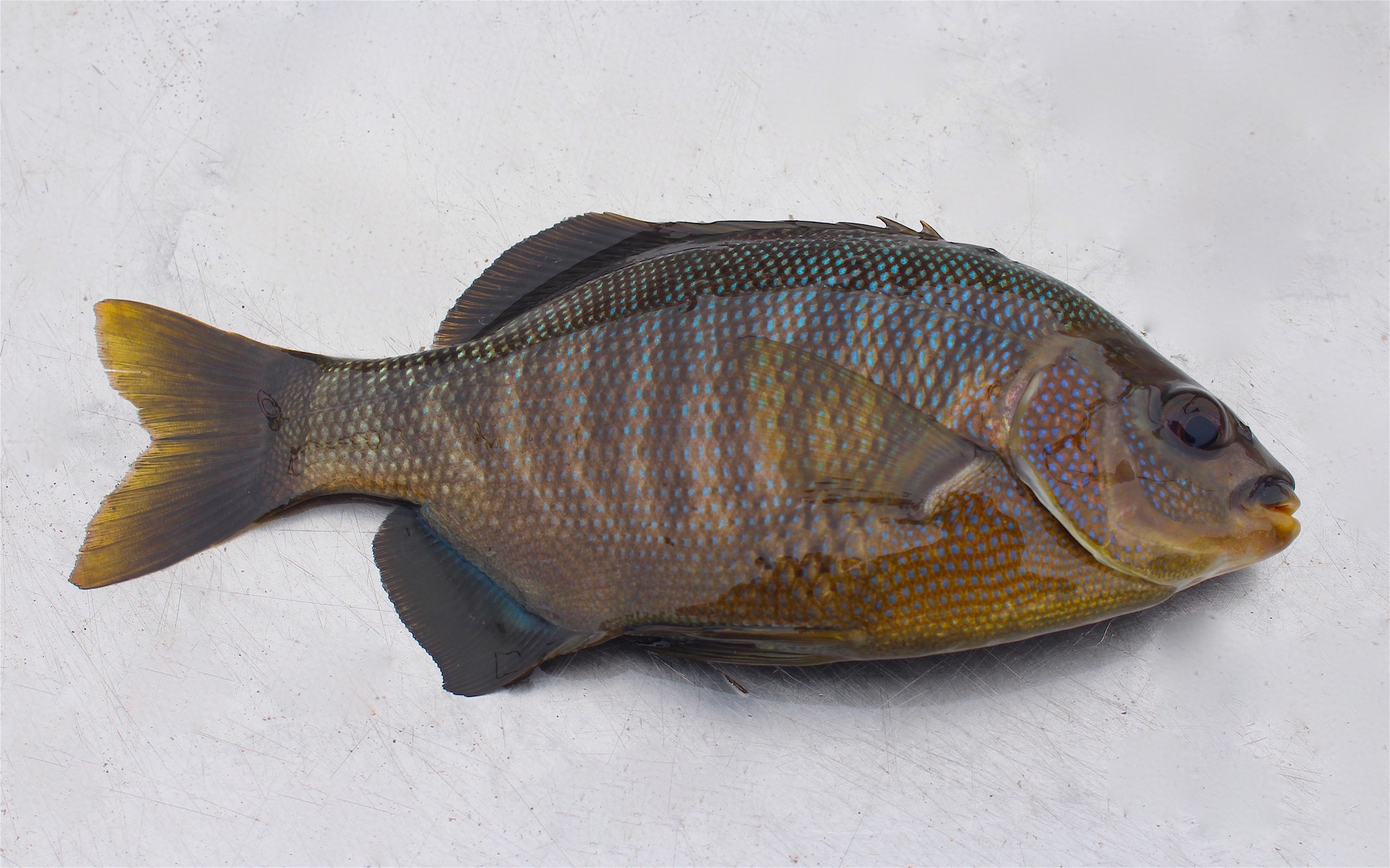 Small greenling, cabezon and lingcod will also enter the catch as well as a few monkeyface-eels. Baby salmon are also found in the harbor some months and sometimes will be hooked; if you latch on to one of the salmonoids handle and release it carefully. 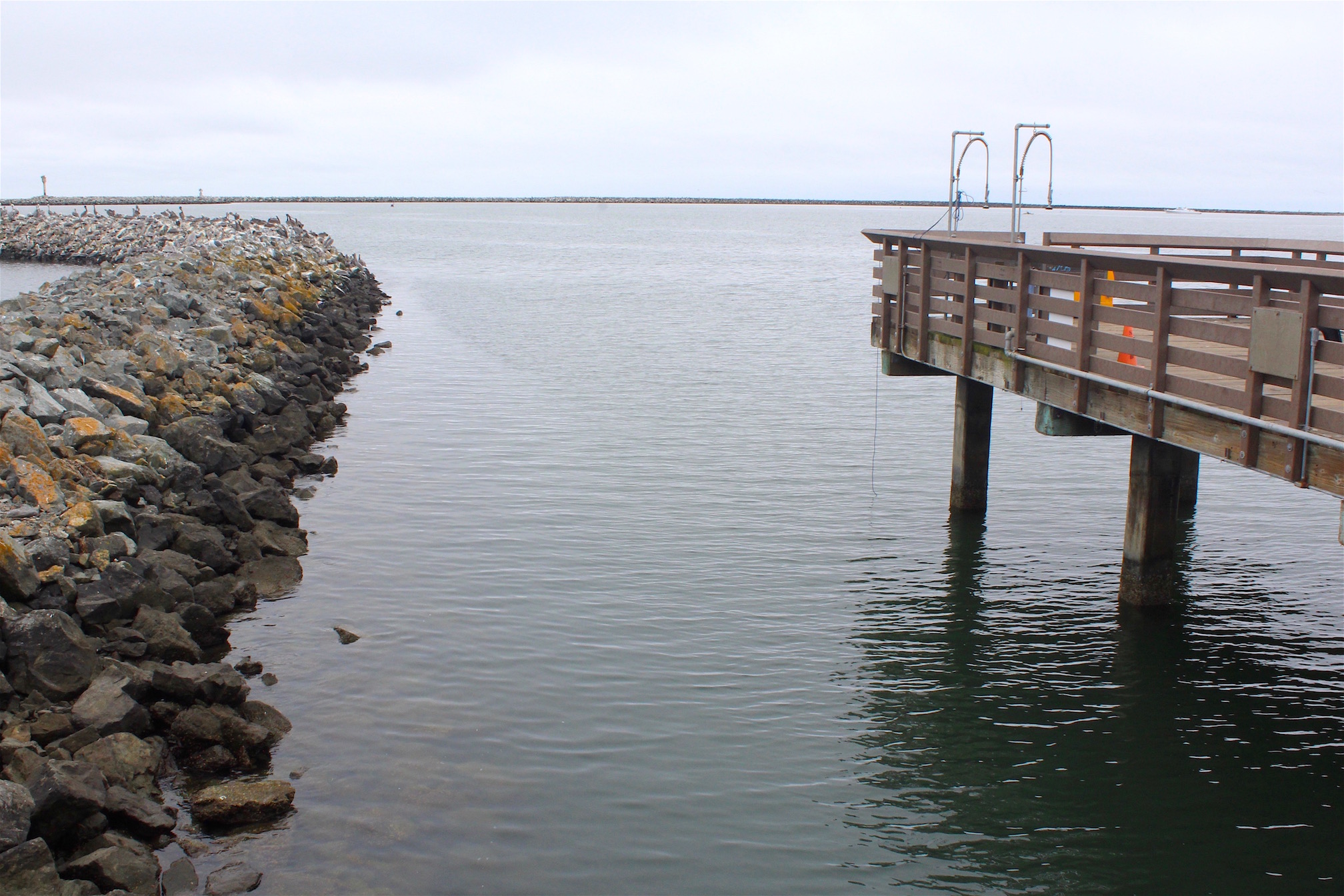 Dependent upon the season, the pier can also yield up fair to good numbers of crabs—red, rock and  Dungeness crabs.

Fishing Tips. A medium-to-light outfit will be all you will usually need here; there is little need for heavy sinkers, and most fish you will catch are on the light side. During the winter and spring, try for rubberlip seaperch, blackperch, striped seaperch and white seaperch. Use pile worms for bait, size 6 or 4 hooks, and fish on the inside, rocky-shore side of the pier. At the same time of year, try casting away from the pier and on the bottom for starry flounder using pile worms or small strips of anchovy. Or, use pile worms, small size 8 hooks, and a float to catch jacksmelt; for these, fish just under the surface of the water. 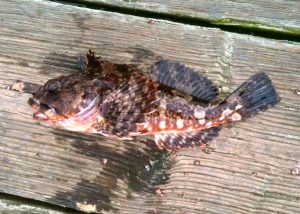 Later in the year is usually better for white croaker (kingfish). Best bet for the croaker are small strips of anchovy fished on a high/low leader using number 4 hooks. Cast into the deeper water away from the pier and be prepared for a strike as soon as the bait hits bottom. Often, white croaker hit as the bait sinks or hits bottom and then they leave the bait alone. One way to overcome this is to start a slow retrieve as soon as the bait hits bottom; the croaker like a moving bait. For sharks and rays, fish at night using squid (if the gate to the pier isn’t closed). Bat rays, smoothhound sharks, leopard sharks, and skates have all been caught off of the pier. 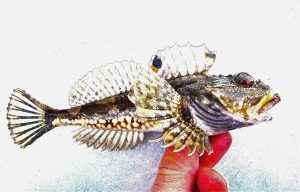 Seasonally, anglers may also see schools of sardines or herring enter the bay. When present they can be caught in large numbers by the use of Sabuki-type bait rigs or, at times, by nets. 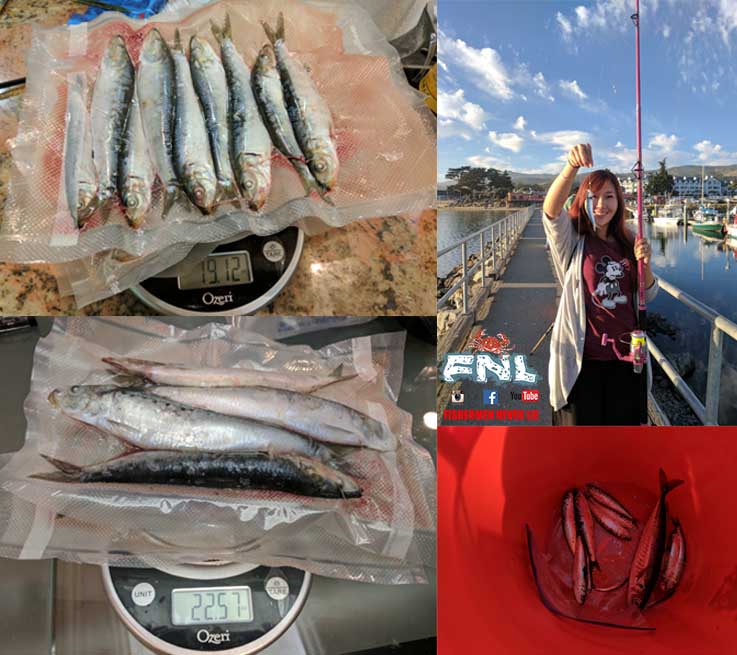 A catch of sardines at the pier.

Hey Ken, I made a visit to the Pillar Point Pier yesterday and fished for about 6-7 hours. The pier was fairly crowded at one point and for decent reason. There were a tremendous amount of bullheads being caught. I was casting a “country mile” and catching some large and chunky kingfish. The guy next to me got some very large rockfish and when he left, I got some rockfish too. The tide went out and so did most of the fish. 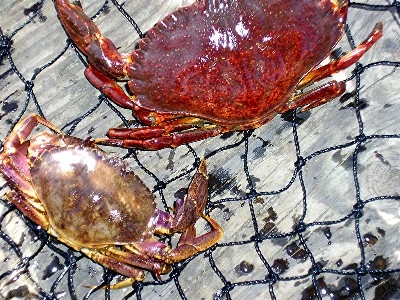 My wife has to work during this weekend, so what better excuse can you hope for to go fishing. There were quite a few people on the little pier, but most of them were crabbing. The first catch was a little nasty, pis… off fish; some guy said it was a “baby lingcod” to which I replied “I don’t think so.” It was about 5 or 6 inches long, a huge mouth with sharp little teeth, the dorsal fin was long, it started right behind the head, and went all the way to the tail. Right behind its head, there was a round spot on the dorsal fin. The picture is not very clear, sorry. I tried to look it up, and it does seem to be a “sarcastic fringehead” but I’m not positive.

Anyway, while trying to get the hook out of its mouth, it decided to bite me, and now it was stuck to my thumb for about a minute until it decided to let go. It had quite a good bite for such a tiny fish.

Now my cell phone rings; my wife; to tell me that she got home early. At that moment, my little 6-ft pole goes flying in the air, I grab it and set the hook with my free hand and manage to get my wife to hang up the phone. Up comes a good-sized jacksmelt (guesstimate 15”). I packed it up a little later; my hands were starting to freeze. All this time I had a second pole with squid in the water, on which nothing was caught. All fish caught on a size 4 hook with pieces of shrimp. Jacksmelt was donated to the woman fishing next to me. all others released. 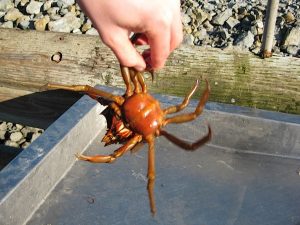 History Note. Although Princeton itself was formerly known as the Old Landing and was a center for the shipping of produce, the earliest pier (or wharf) in the area appears to have been one built by Josiah P. Ames. An Englishman, he constructed a wharf in 1867, called his site Amesport Landing and watched a tiny village called Amesport take shape. The wharf was located just a short distance south of Pillar Point Harbor, near the mouth of Arroyo Medio, on today’s Miramar Beach. More than a thousand feet long, the wharf was able to reach water of moderate depth and became a vital link for shipping grain and vegetables from the area. The Pacific Mail Steamship Company eventually acquired the wharf and landing site but over time most of the village deteriorated and largely disappeared.

In 1917 Joseph Miguel built his two-story Palace Miramar Hotel on the old Amesport site. Since the original wharf needed repairs, new piles were fashioned from eucalyptus trees cut down in nearby El Granada. The pilings were each 100 feet long and each weighed two tons or more.

A pier or wharf famous (or infamous) in the 1920s was Patroni’s Wharf. Apparently smugglers found it an ideal spot to unload their booze during the prohibition years. Imagine, fish and crabs for the anglers during the day, whiskey and rum for the smugglers during the night. A little trade could provide a pretty good meal—and refreshments.

Lastly, there is the story of the fishing pier built at Granada. In the early 1900s, the Shoreline Investment Company designed a grand resort and seaside development that was to be the pride of the area. The Ocean Shore Railway and the Red Star Auto Stage (and its five cars) brought passengers daily from San Francisco to Granada. Eventually, more than 2,000 lots were sold to buyers eager to escape the congestion of the city. However, the investment company never recovered from the 1906 earthquake and apparently neither did most of the people who had made down payments on lots. Few ever moved in. The rails were removed in 1922 leaving behind a bathhouse, dance halls and the fishing pier, which was used by the local youth for many years. 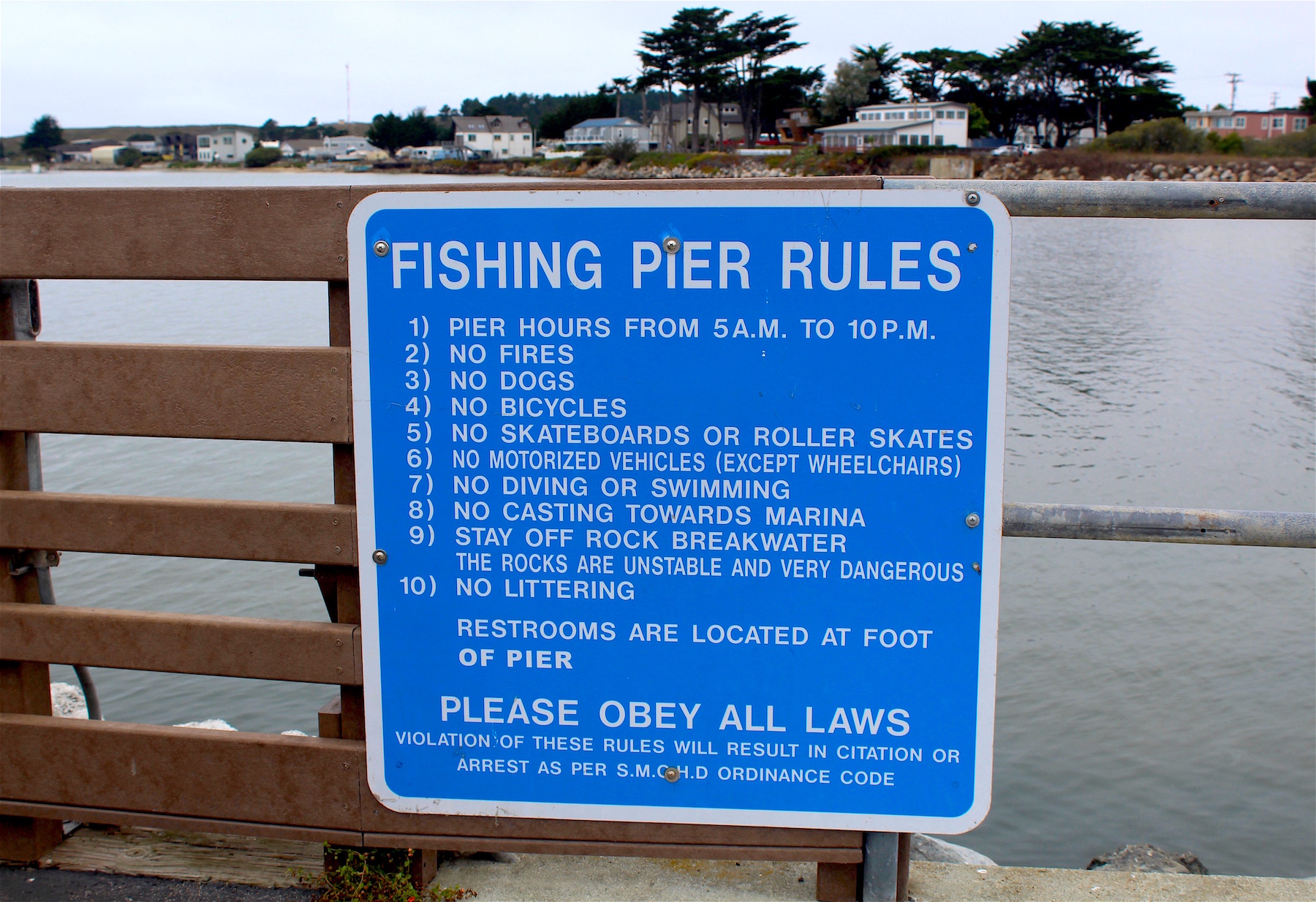 Facilities: There are no lights but it does have a fish-cleaning table. Restrooms (porta-potties) are available near the path to this pier as is free parking.

Handicapped Facilities: The surface of the pier is planking and the pathway to the pier is wide enough for wheelchairs. The railing is approximately 42 inches high.   Handicapped parking is available but the area is not posted for handicapped and current the porta-potties are not set up for the handicapped.

How To Get There: From Highway 1 simply take the Pillar Point Harbor turnoff and follow the road down to the main parking lot. This pier is to the far right of the parking lot.