It sure ain’t what it used to be! That was the straight-to-the-point observation of one local I interviewed regarding the “new” Vallejo Pier. If anything, it was an understatement! After the demise of the old Vallejo Pier the city seemed to realize it needed a new pier and this strange solution is the answer. Much of the Vallejo waterfront (aka Independence Park) , from the public ramp to the marina (seawall, concrete walkway with metal railing, benches, and bait cutting pads), is a newly designated “public fishing pier”—which, of course, means no license is required. The good thing is that people have an attractive place to fish, the bad aspect is that fishing is rarely as productive as that at the old pier. Nevertheless, when all else fails punt. 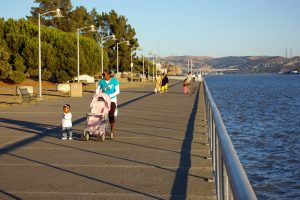 Environment. The concrete walkway from the public ramp to the marina is considered the pier. At the west end of the area an actual pier does exist but it is small and often less productive than the water along the walkway. Water along the walkway is somewhat shallow, fairly free of obstructions and mainly produces striped bass and a few flounders. Ditto the small pier on which true “pier rats” may take refuge. Unfortunately the small pier sits near the ramp area and low tide can see very shallow water and almost mudflat-type conditions. In addition, on the side of the small pier, and to the front, is a board fence designed to minimize water currents in the launch area. Thus if a large fish is hooked the angler is forced to walk the fish down to the beach (since the board fence sits out a few feet from the edge of the pier). There are few rocks to snag tackle but here a few more might be good since they will often attract stripers. 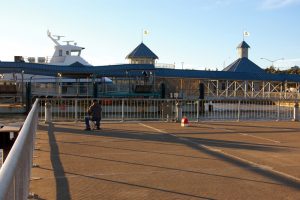 Unfortunately the fish that made the former pier famous—sturgeon—are much less common here. It is simply a more shallow water environment and leaves the angler a few hundred feet short of prime sturgeon territory. A few diamondbacks are caught, but never in the numbers seen at the former pier.

Fishing Tips. Much of the information on techniques used at the old pier (see above) also applies to this pier. It is an estuarine environment that means the primary fish are striped bass, sturgeon (a few) and starry flounder (that appear to be making a minor comeback after a serious decline). Summer and fall months may see a few jacksmelt and some bat rays but they’re rarely in large numbers.

One tip I would suggest if you decide to fish from the small pier is to try the inshore waters first. Several times I’ve had steady action on small and medium-sized stripers when fishing next to the shoreline while anglers out at the end were going nearly fishless. This is also the best area by far to try out your artificial lures—Fish Traps, Rebels, etc. However, if you are seeking sturgeon fish from the end of the pier, this will put you closer to the deeper water that the diamondbacks prefer.

Note. My first visit to the “new” pier, in this case the small wooden (Launch Ramp Pier) pier at the west end of the waterfront, proved to be very dismal—one small staghorn sculpin. The wind was hard and very cold, and there didn’t seem to be much to recommend the pier. And then I saw the fish! As I began to leave I noticed a boat pull up to the nearby public ramp and soon after the anglers hopped out and begin to take pictures of a huge seven-foot-plus sturgeon. A crowd soon gathered and I hurried over to see what I could see. It was obviously an over-sized fish, one that should have been released since it exceeded the current slot length restriction. By the time I got to the boat the anglers were also aware of their mishap. Feigning ignorance they declared they would haul the fish back out to deeper water and release it. Only one problem that I could see—the fish appeared dead. In their ignorance they had kept a fish that would bring them a heavy fine. Now in their fear they were going to haul the carcass out to deep water. What a waste! A fish probably more than fifty years old which had died simply because the anglers didn’t learn the rules. And instead of a useful use for the now dead fish (perhaps the meat could have gone to the needy), it was simply dumped into the water. I’m not sure how Solomon would have dealt with the issue of what to do with the fish (or what to do with the fishermen) but the sight certainly left me with an upset stomach.

Howdy, I have started to become a regular at Vallejo Pier.  It is convenient and is not a major expedition to get in a few hours fishing there now and then. Last week, I caught a keeper size striper about 20 inches long on ghost shrimp.  A few weeks before I caught a 12 or 14 incher on the same. About four were caught by the anglers there within the 1st two hours after high tide but none were keepers. A group of guys fishing the incoming tide on the day when I caught the keeper size striper said they were catching starry flounders on the incoming tide using pile worms.  A few days earlier, I saw a fellow catch a flounder using grass shrimp.

Apparently, it is toward the end of the starry flounder spawn when they migrate in from their ocean haunts to brackish waters of the mouths of the rivers and streams emptying into the bay…

(Final note, Vallejo Pier, actually a wharf, is reputed to be the best spot to catch a sturgeon from a pier in the Bay Area.  One old geezer said he hooked one. He said it broke the water but took all his 25 pound test line off his reel.  I would have figured the old guy was full of gas excepting his story was corroborated by another fisherman who came by later.)

Martin, Where are you fishing —since the original Vallejo Pier burned and was removed?

Ken, Well, it’s still called Vallejo Pier, but it’s actually a wharf now. It’s along the Vallejo waterfront across from Mare Island on both sides of the ferry terminal.  Lately, I’ve been fishing down by Norm’s Bait on the wooden pier that’s next to the boat ramp.

In chatting with the folks fishing in the area, Starry flounders have been taken on pile worms.  Also, I’ve seen people catching undersized stripers (and releasing them of course.) Within the last two weeks, two different fishermen said they had sturgeon break their lines.

Yesterday, I met a guy on the wooden pier who said he had one up next to the pier the day before but couldn’t figure out how to land it when the sturgeon broke his line.  About two weeks ago, an old geezer said he hooked a sturgeon, and it took out all of his 25-pound test line before breaking it. He said he saw it jump out of the water.  He guessed it weighed 80 pounds or so.

Later that day, another fisherman had moved up onto the wharf. He had been fishing on the flats near the bridge that crosses to Mare Island. He had been there when the old geezer hooked the sturgeon and recounted the same tale—the sturgeon broke water and spooled him. Anyway, the old geezer said he hadn’t had enough line on. He has a full spool now!  Or did when he was telling me his sad story.  He’s not about to let that happen again if he can help it.

Sauntered onto the esplanade near the ferry yesterday and found a very small elderly gentleman with a fifteen-foot pole struggling with a fish. He said, “I think it’s a ray or something.” I told him that I didn’t want to rain on his parade but rays are rare hereabouts. Went to the car to get my noose and about twenty minutes later we had a skinny 57’” sturgeon flopping all over the landscape. I stayed for a couple of hours and caught about eight little bass, (6”to 12”) and one 20” keeper. There’s a lot of bitty bass and some real decent ones in the Napa River right now. I got all my fish on pile worms within forty feet of the wall. Use larger hooks and pull the trigger fast when bit…that way the fish you release will have suffered nothing more than a sore lip.

If you can cast it more than a hundred yards you’ll get beyond the mud as the depth drops from 8 to 15 to 40 feet. But you need a big sinker or a sinker with wire legs to hold bottom during the moving tide. Usual bait for sturgeon here is shrimp.

Hours: Apparently both the concrete area along the waterfront and the small wooden pier are open 24 hours a day.

Facilities: There are no facilities on the small pier although restrooms are located a short distance from the entrance to the pier. The restrooms are open 8-8 in the summer, 8-6:30 the rest of the year. Norm’s Bait and Tackle is located near the front of the pier. There are lights located on the walkway but none on the wooden pier.

How To Get There: From I-80 take the Georgia Street exit all the way to the waterfront.