July 2 was a gorgeous southern California day, light variable winds, afternoon low tide, evening high tide with a grunion run expected (never saw any grunion where I was fishing). What I did see/catch was 4 Calico bass (1 legal, 3 short), 2 leopard sharks (1 legal, 1 baby), a tiny shovelnose, 1 brown smoothhound, and this … check out the pics! All were caught on half-sardines using circle hooks; ALL fish were released. Later after sunset, the water was full of activity, but every hit severed the line (80lbs test braided leader) so I can only assume they were large toothy sharks! Altogether a fantastic So-Cal day by the water. Sorry I don’t have a weight on the Giant Bass, but he was an inch or so over 3 feet, and it took two of us to lift him over the rail for the release… Truly a magnificent creature! … The fish was released with the net, and the pics were snapped by a kind tourist while I was working on getting the hook out and releasing it, the fish was never “handled” in any way, except for pliers to the hook, so I feel all was done as efficiently as possible to expedite the release. 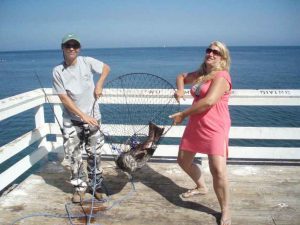 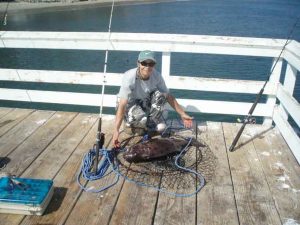 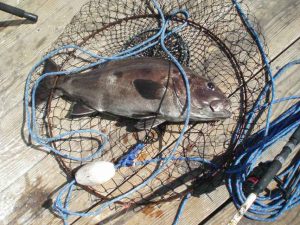 <*}}}}}}}}}>< — Local legend has it that a local angler one day hooked a nearly 600-pound giant (black) sea bass while fishing near the pier in a skiff. Supposedly the huge fish did an imitation of the marlin in The Old Man and the Sea and pulled the skiff nearly fifteen miles to near the Santa Monica Pier. At that point a local lifeguard used scuba gear to tell him what he had hooked (perhaps he thought he had a submarine?) and he decided to cut the line on the illegal fish. Now that is a fish story.

<*}}}}}}}}}>< — Marlin from a pier? Well, not exactly. The following report details how a marlin came close to the pier and was captured. The marlin was probably sick and I am a little surprised someone would have it mounted given the method of capture.

Jim Overfield of Pacific Palisades saw a surface disturbance on the edge of the kelp bed in front of the Paradise Cove pier while paddling around on his 11-foot Styrofoam sailboard last Sunday.

A closer look disclosed it was a marlin, apparently chasing anchovies.

As a crowd of 400 sunbathers watched, Overfield herded the fish to the beach and when a wave washed it ashore a half-dozen spectators pulled it up on the sand.

Among those helping to subdue it with a gaff was George W. Tuess II of Pacoima, who bought a boat this year to fish for marlin. But after burning $800 worth of fuel, Tuess was still marlin-less.

Overfield presented the 9-foot-6, 185-pound marlin to Tuess, who is having it mounted.

<*}}}}}}}}}>< — Another interesting fish was a yellowtail captured in the cove in 1958. It’s not recorded what happened to the fish. We can hope that it was rereleased.

A yellowtail tagged at Cedros Island in September, 1955, during a department D-J research cruise, was recaptured at Paradise Cove last February 15th after 882 days at liberty. The distance moved, 407 miles, is the longest recorded for a tagged yellowtail and the recapture site is the northernmost point of return to date.

<*}}}}}}}}}>< —  Paradise Cove is reputed to be one of the “recurring locations” in California for great white shark sightings and attacks (although the only known fatality at the cove was a kayaker killed in 1989).

Offshore from Paradise Cove the Monterey Bay Aquarium set up a 4 million-gallon mesh, floating pen where captured great whites were held pending their (1) release or (2) shipment to the aquarium. The practice engendered both support and criticism as well as the following joke: (Q) What do you call the paparazzi at Paradise Cove? (A) Chum.

<*}}}}}}}}}>< — California’s first artificial reef was constructed in Paradise Cove in May 1958 from 20 wrecked automobiles. It was a joint venture by the California Department of Fish and Game (DFG) and Joe Morris who owned Paradise Cove (since the department didn’t have the $200 needed for the cars). Different materials would be tried at different reefs by the department (old street cars, tires, quarry rock and concrete boxes) but the initial reef was made from the cars that were placed in 50 feet of water in the cove. The event was chronicled in the Los Angeles Times.

First Attempt Made To Establish Fishery

The first attempt in a three-year experimental program to establish new fishing spots along the Southland ocean coast will be carried out Tuesday morning by the Department of Fish and Game at Paradise Cove.

The DFG will drop 20 wrecked auto bodies at a predetermined area of the cove which has a barren, silty bottom and no vegetation. Kelp will be transplanted in the [place where the autos are dropped.

Time for the operation has been set for 9 a.m. Tuesday

Joe Morris, owner of Paradise Cove and operator of the present fishing facilities there, is paying for this initial experiment with the DFG furnishing the manpower and scientific background.

The experimental program has been undertaken in hopes of establishing better fishing along the coast. In many places over a period of years kelp beds have disappeared and fish along with them. It is hoped dumping of the auto bodies will provide anchorage for new kelp beds plus hiding places for fish. 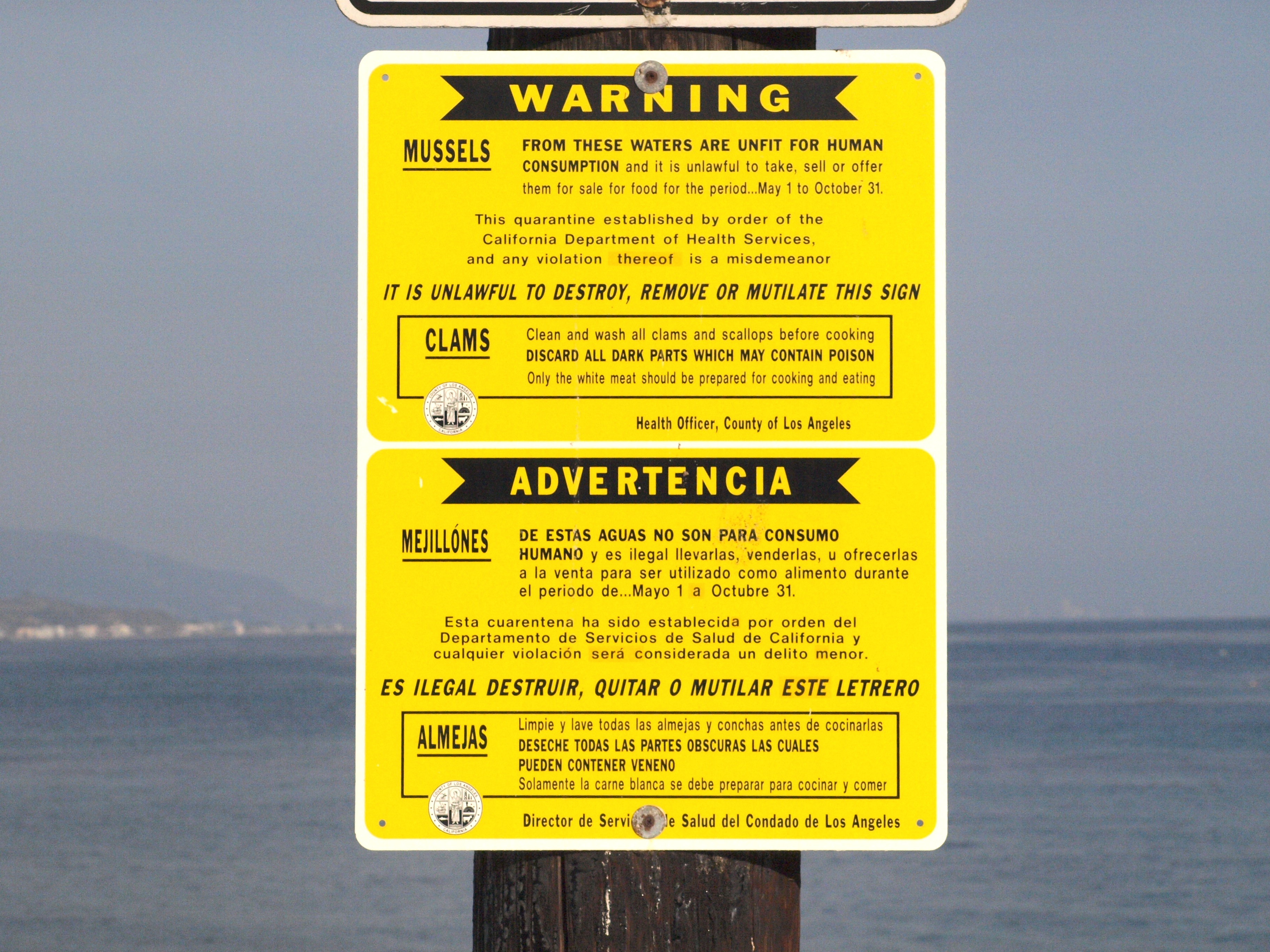 As reported later by the DFG California Department of Fish and Game, “Fishes began to aggregate around the Paradise Cove car body reef within hours of construction. Surfperch, sargo, kelp bass, and small California halibut were among the first fishes attracted to the reef, followed closely by sheephead and opaleye. Later, rockfish and sand bass appeared. The fish population on the reef increased, until a high of 24,000 semi-resident fishes was counted in September 1960. During a 30 month survey period, 49 species of fish were noted on Paradise Cove Reef.”

However, as might be predicted, the old automobile bodies were fairly quickly eaten away by the salt water. Today the reef has largely disappeared and reef-builders concentrate on longer lasting materials. I doubt if dumping wrecked cars into the sea would even be contemplated today. Environmental laws are much different and someone would undoubtedly protest. ”Something” in the auto would assuredly be seen as polluting the ocean.

<*}}}}}}}}}>< — Trailer camping? My how times have changed! According to a 1953 publication by the Fish and Game (Fish Bulletin #96), “This is a recently developed resort area catering to trailer camping, ocean fishing and bathing. There is a good sport fishing pier where skiffs are rented. There are hoists for launching and lifting skiffs and in 1952 there was an anchored fishing barge off the cove.” I’m afraid those days are over.

<*}}}}}}}}}>< — One of my most interesting visits to the pier took place in April of 2009 when I fished the pier with Hashem, a member of Pier Fishing In California. Hashem loves to pursue lobsters while I pretty much stick to fishing. The date was “Good Friday” and it seemed appropriate given the unending number of walleye surfperch that were out toward the end of the pier.

Thinking there must be something bigger to be had, I decided to use one of the walleyes as live bait. Pretty soon the rod took a dip and I knew a bigger fish was on than the aforementioned perch. I called for Hashem to grab his net but it turned out he already was bringing it up and inside was a legal-size lobster.

Soon after, I had a halibut to the top of the water and shortly thereafter the net, filled with a halibut and lobster, was pulled up to the pier. Unfortunately the halibut was only 19 ¾ inches long, short by a little over two inches. Alas, the lobster also was illegal since the season had just ended. I’ve never seen a net pulled up that contained the unusual duo—halibut and lobster—but both of the Southland prizes had to be returned to the water. Too bad; halibut and lobster are two of my favorite seafood’s. 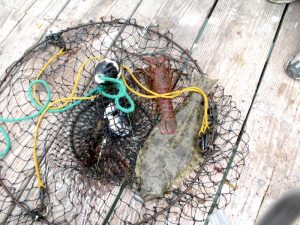 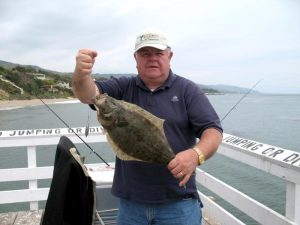 <*}}}}}}}}}>< — One of my early visits to Paradise Cove started out a little strange when, as I stopped to pay the entry fee, the attendant asked “Going to the restaurant?” “No, I want to go fishing on the pier.” “Oh, you need to check to see if it is open today, they may be filming on the pier. Go down and ask the guard, he’ll know where the action is today.” Filming? Guards? What was going on? Turns out it was just another day in the life of Paradise Cove, its quintessential California beach, and this pier, a frequent setting for television shows, movies, commercials and music videos.

The cove may be best remembered as the home base for Jim Rockford (James Garner) in the The Rockford Files (originally shown in the ’70s and resurrected in the ’90s). Rockford’s humble trailer, given the fictional address “29 Cove Road,” was actually located in the parking lot of the Sandcastle Restaurant. A loyal legion of fans (including myself) will always remember Jim, his dad Rocky, his police contact Sgt. Becker, Jim’s girlfriend Beth, and cowardly sidekick “Angel” Martin (who was no angel).

A less known fact is that the first house to the right of the restaurant served as William Conrad’s house on Jake and the Fatman. The list of appearances in television series is long: Sea Hunt, Love American Style, The Mod Squad, Baywatch, Baywatch Nights, Charlie’s Angels, Happy Days, The Hardy Boys, Malibu Run and The O.C.

Movies include Belles on Their Toes, Wonderbug, The Last Tycoon, Listen to Me, Indecent Proposal, American Pie 2, House of Sand and Fog, Lethal Weapon 4 (the pier is seen in the background), Monster in Law, Alias, Gidget, Gidget Goes to Hawaii, How to Stuff a Wild Bikini, Beach Blanket Bingo, Sponge Bob Square Pants: The Movie, and Hannah Montana: The Movie. 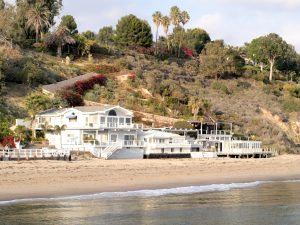 This home that sits just downshore from the pier has been used for many movies.

The pier also served as home base for one of my favorite low budget movies—Raymie. The movie, a B&W film made in 1960 concerns a kid trying to catch “Moe,” the legendary barracuda at the pier that’s been stealing fish. A mini-classic of sorts. You can see scenes at the following:

Commercials at the pier have included ones for Chrysler, Budweiser and many others. Hummer even did a commercial featuring a brand new Hummer heading full speed down the pier until it sailed off into the salty Pacific. I assume the saltwater must have been just a tad bit hard on the car. Then again, if you’ve got to sail off a pier in a car, what better protection than a great big, heavy Hummer?