The floating docks of Monterey Harbor and the pilings beneath Municipal Wharf II provide a rich and diverse community created largely by human activity. Such communities have imaginatively been called “accidental zoos.”… At low tide the pilings, shaded by the wharf, form an intertidal zone without algae and without herbivores. Familiar, no; informative, yes! … zonation is sharply delineated. The mussel/barnacle zone is out of water much of the time. A little lower, in a zone immersed most of the time, live aggregating anemones… Still lower and approaching the low-tide level, a flash of red reveals strawberry anemones, usually subtidal organisms that only infrequently are exposed to air. This community is spared many of the vicissitudes of rocky intertidal life—no burning sun and UV light, no pounding surf, little osmotic stress from direct rain… Subtidally, the pilings are a treasure trove of biological interactions. Huge ochre sea stars engorge themselves with mussels. Nudibranches cluster about their anemone prey. Anemone clones… do battle across strictly demarcated no-man’s-lands. And here we find unusual organisms such as phoronids, enigmatic suspension feeders that we have not seen elsewhere along Monterey’s shores. A wharf is a spooky place to dive. It’s dark, with visibility often only an arm’s length. Fishing lines threaten entanglement, and raucous sea lions flash by. But we have a strong incentive to keep returning to this distinctive habitat, where something new seems to lurk behind each piling. 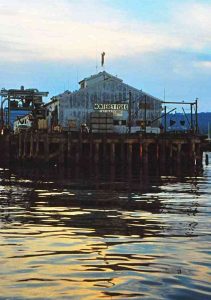 The end of the wharf from the water

There are some piers that seem to have a yin and yang disposition, if you know what I mean. The action can be hot or cold, good or bad, peaceful or hectic; moods that seem to depend upon some sort of unwritten script dictated (in romantic terms) by the gods, in realistic terms by the seasons or the whims of sometimes-unpredictable fish. Two stories, one good and one bad, show the schizoid nature of this pier.

The first story, the good or yang, occurred in July of 1984 while I was making one of my annual trips along the coast. I had stayed the night in Morro Bay, gotten up early and fished for an hour and a half at the Cayucos Pier. The pier was crowded and everyone seemed to be catching fish. Midway out, anglers were catching bucketfuls of small bocaccio, but I had seen far too many of the small fish the night before at the Morro Bay North T-Pier. Instead, I joined a throng of anglers out near the end of the pier casting artificial lures for Pacific mackerel and jack mackerel. The result was 15 fish for my fairly short visit. Next, I stopped at the San Simeon Pier, again for an hour and a half. Mackerel were absent but small bocaccio and lingcod covered the bottom. The result was 21 fish. 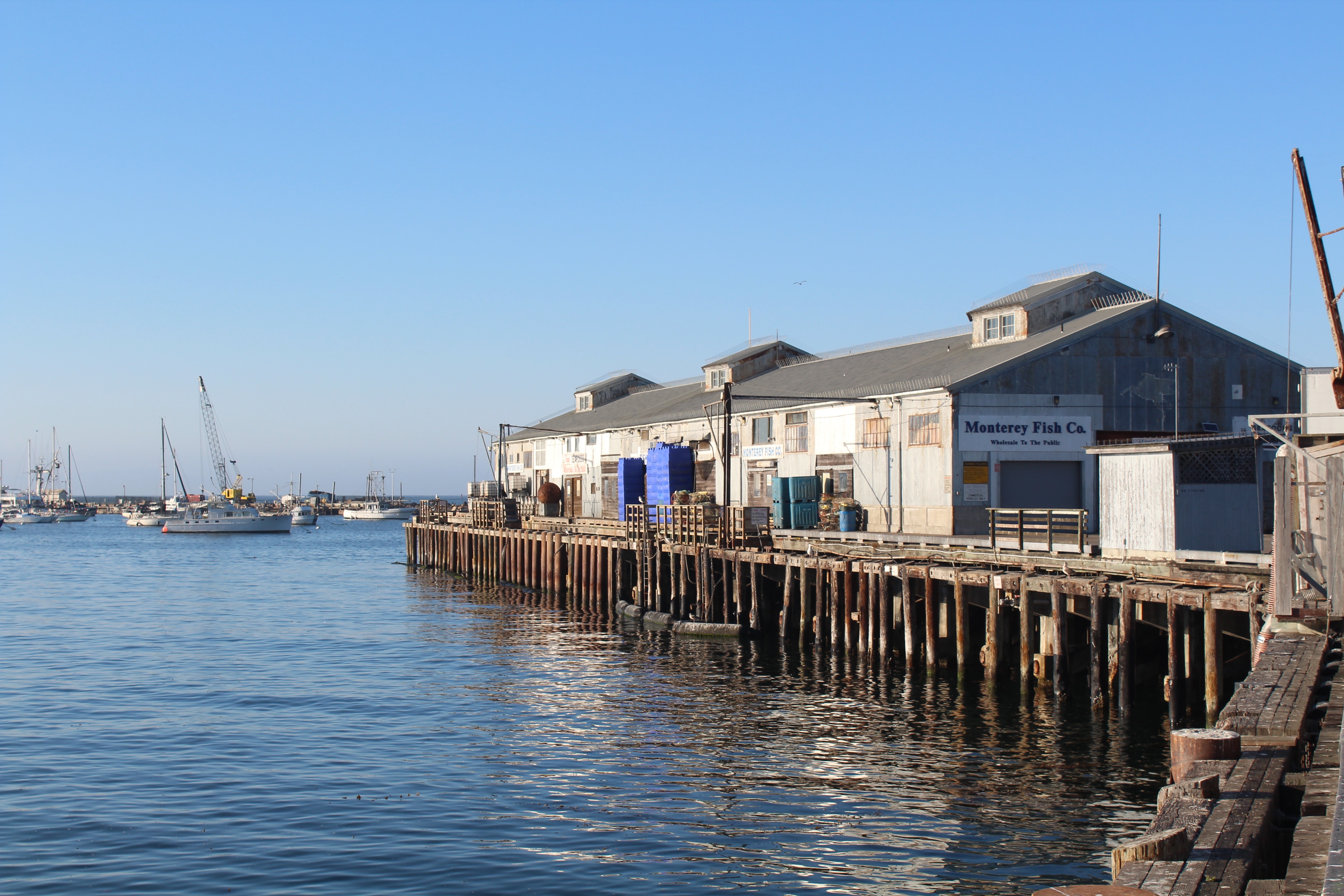 The left side of the end is a “no fishing” area

However, I was running late and headed north. In just under three hours I had traveled the beautiful Big Sur coastline and was fishing at the Monterey Wharf #2. But I wasn’t alone! The wharf was lined with anglers catching Pacific mackerel while reporters and television cameras tried to capture the torrid action. The sea itself was calm but as I watched the water a dark ball would form: a school of anchovies several feet thick and solid with fish. But a second school of fish, predators by nature, was also present and the mackerel in that school were larger and faster than the anchovies. Soon the mackerel would attack and the anchovy school would disintegrate as individual anchovies literally fled for their life. It was a Roman holiday, nature at its most vivid, and showed true the old adage survival of the fittest. The anchovies seemed to be using the pier and its pilings for protection but the pier proved to be a Maginot line of defense as the mackerel shredded the school of anchovies time after time. The mackerel were after the quick little baitfish and the anglers were after the mackerel. Mixed in with the “Mac Attack” were a few jack mackerel and, if an angler dropped bait to the bottom, small bocaccio and lizardfish. Again it seemed almost too easy as an hour and a half of fishing produced 32 fish. The highlight of an already excellent day was the torrid action and excitement at this Monterey wharf. 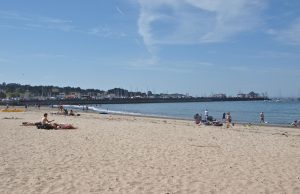 The view from the beach

An April visit a few years later proved entirely different, it was the yin or bad counterweight to my earlier visit. I had stayed the night in Monterey and gotten up early for a somewhat apprehensive “hour of the pearl” visit to the wharf. Why apprehensive? (1) Because of the bone chilling, 40 mile-per-hour winds that had accompanied a walk out on Fisherman’s Wharf the prior night. (2) Because of reports that said fishing was slow. Undeterred, my 6:10 A.M. arrival at Wharf #2 saw a beautiful morning sky emerge replete with a warming sun and the absence of any wind. Absolutely beautiful conditions! I was the only fisherman on the wharf, I had my pick of fishing spots, and I was soon at a spot that had proven to be successful on previous trips. I was even next to a silver fire hydrant that said “Jones 1981” on the side. Was it a harbinger of good things to come or did it portend gloom? Was I destined to have one of those unbelievable days that happen just once in a blue moon or was I in for the BIG disappointment? I wasn’t sure but I was prepared: several different kinds of bait, light and medium action rods, and a warm thermos of coffee.

As the Frankie Boy II arrived at the wharf, made fast the rope between boat and bollard, and began to unload its catch of squid, I made my first cast and began to wait. I waited and waited and then waited some more. I moved to different spots, I tried different depths, and I tried different baits and riggings. In two hours of fishing I had nary a nibble and was able to see why I was the only fisherman on the wharf—not counting the commercial guys still busy unloading their squid. To make it worse, the wind did come up, the kind of wind that required two shirts, a sweater AND a heavy jacket. Turned out that fishing had been lousy (terrible/appalling/horrible—pick your adjective) for several weeks and it didn’t intend to improve just because this famous pier fisherman was present. I was fishless in Monterey. Such is the nature of this pier. 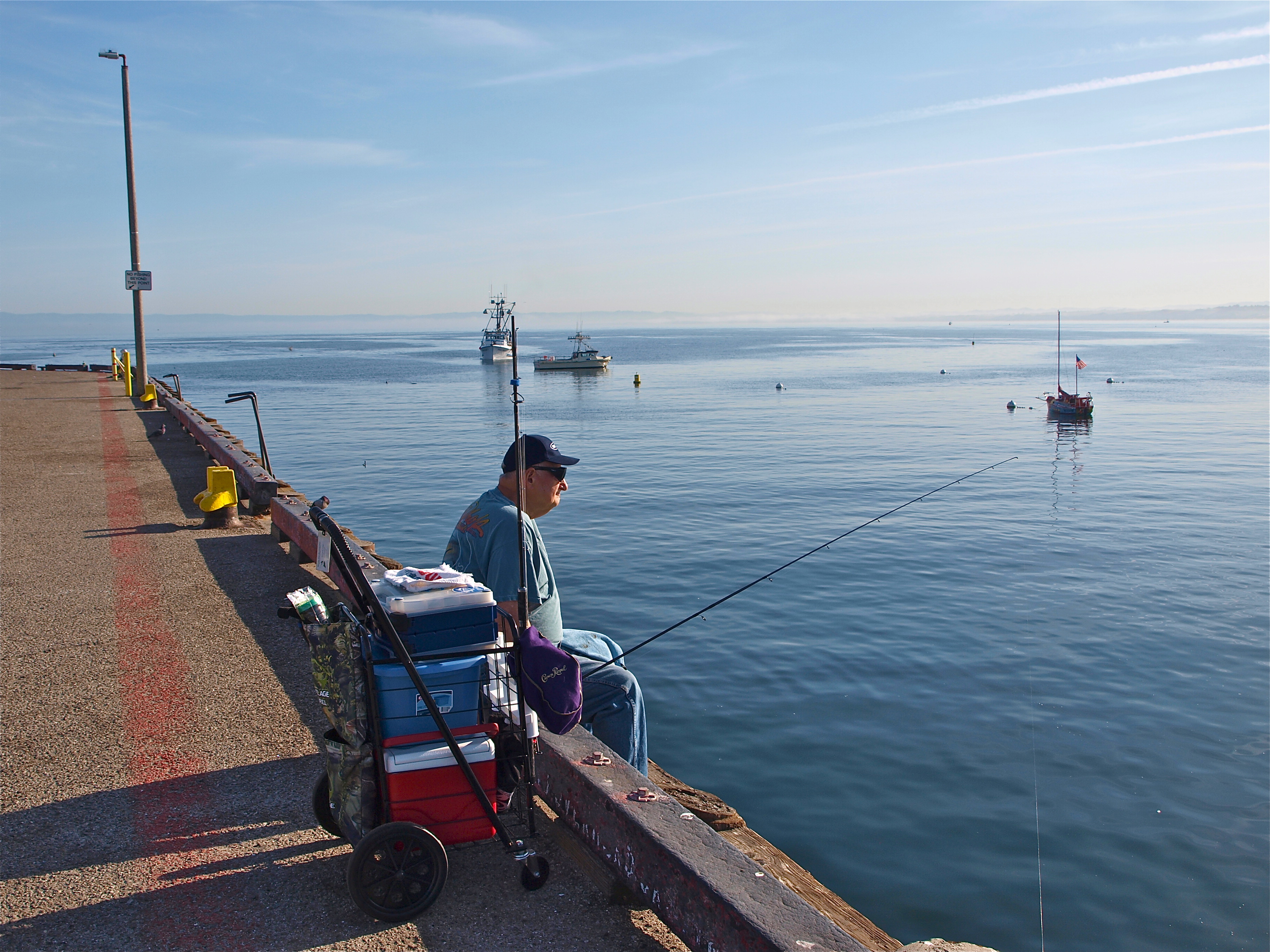 When fishing at the pier is slow, you can almost have the pier to yourself — my fishing buddy Mike Granat

Environment and Fish. Most visitors to Monterey seems to wind up down at the wharf during their visit. Many do not realize there are two wharves. The more famous is Fisherman’s Wharf, built in 1870 on the site of California’s first wharf and today home to restaurants, tourist shops, and a couple of Sportfishing landings. Adjacent, to the east, is a newer wharf that was constructed in 1926 (and repaired in 1983). Here, the commercial fishermen unload their catch and sport anglers try to make a catch. Fisherman’s Wharf deserves its praise; it is a fun place to visit, and it has a certain charm when the sea lions are barking and the sea otters are drifting on top of the bay. Still, for the pier fisherman Wharf #2 is the place to go.

Wharf #2 is fairly long at 1,636 feet, and fairly wide at 86 feet, but several sections do not allow fishing. The inshore section on the south side of the wharf (to about half way out) faces the boat harbor and is marked no fishing. The far end of the wharf is primarily a working area for commercial boats and also marked no fishing. The area on the south side just past the first building (near where the pier widens) was an area that I used to like to fish for perch but it appears now to also be a no fishing zone. Bottom line: the wharf is open to anglers on perhaps 75% of the north side of the pier. 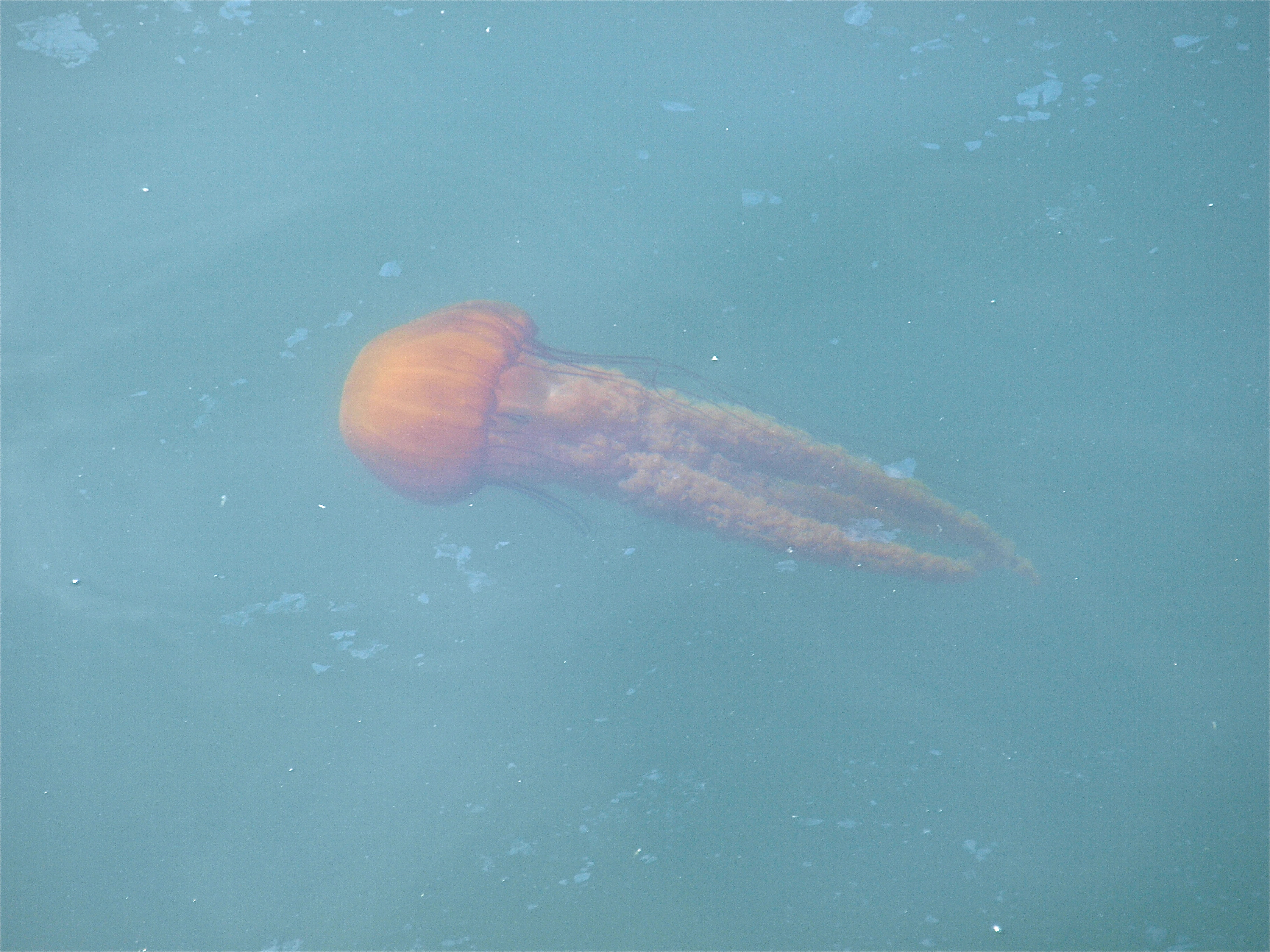 You may see some jellyfish come swimming along

The result is that the north side of the pier is heavily fished all the way from the shallow water surf area (which is generally mild) to about three quarters distance out on the wharf where water is fairly deep. At the foot of the wharf is a sandy beach area, the beginning of Monterey State Beach, a popular stretch of sand that extends from the wharf up past Seaside and beyond. (However, just to confuse things, the beach on which the wharf is located is called the Monterey Municipal Beach, just up the shore is the Window on the Bay Beach, and just up from that is the Del Monte Beach.)

Because the breakwater and the various structures in the harbor area block water currents from the south, the water north of the pier is usually very calm. For that reason it’s become a favorite place to take beginning divers and because of the divers we have a good picture of what the bottom looks like to the north of the pier.

Near shore, the bottom is sand, the water is shallow, and there are extensive beds of sand dollars (that attract fish like starry flounder and wolf eels). Sand-frequenting species such as surfperch tend to dominate the catch in this area. A short distance further out sees flatfish—sanddab, C-O turbot, starry flounder and numerous California halibut. Apparently the divers also record good numbers of thornback rays, bat rays and even some big electric rays.

The sand then gives way to small beds of eelgrass containing numerous juvenile fish while about 200 yards out from the beach begins a large shale reef known as the Tanker Reef or Shale Beds. Bull and giant kelp attach to the shale while crevices hold octopus and fish.

So, use the information to fish the zones: in the shallowest water expect the larger surfperch (barred and calico), in slightly deeper water target flatfish, batoids (rays) and a few selachians (sharks). Of course the wharf is long, so anglers can reach water depths that range from moderate to fairly deep and the deeper water is generally the area to try for pelagic species. When schools of sardines, jacksmelt, or mackerel (Pacific and Spanish) make a visit, expect the pier to be lined with anglers casting out bait rigs. Most people will catch fish but do be careful of tangles and use simple courtesy since space will be at a premium.

When the mackerel are absent many of the lines in the mid-pier area will be directed down around the pilings. The pilings are often blanketed by all manner of sea creatures but most important, for the anglers, they are sometimes heavily covered by mussels. In addition, especially during the summer and fall, there can be large buildups of kelp around the pilings. Food and shelter means small fish which can in turn mean larger fish. Typically schools of perch, a few rockfish (mostly juveniles), cabezon, small lingcod, and, during some years, pesky senorita hang under and around the pilings. Of course, like most piers along this section of the California coast, there can be tremendous variation from year to year (again, the yin and the yang).

Some years, especially warm-water years may also see some unexpected visitors. As example, a large school of striped mullet made a showing at the wharf during the summer of 2016, a far distance from their normal SoCal home. That same year saw a 6-foot-long sturgeon hooked off the wharf in September. As might be expected, the angler was not prepared for such a large fish and it eventually broke off after giving glimpse of its size to the excited anglers watching the fight.