I don’t have a problem with anglers catching and eating fish but I do have an aversion to anglers that think they need to kill and display fish—and then do not use them. But, everything sounded O.K.

Later, I noticed the group caught two more large bat rays and they were dutifully lined up in a row with the original ray for the tourists to view. It seemed wrong to me and I wondered why the jacksmelt angler didn’t slice off the wings and put them in his cooler. However, eventually I did see him head over and start cutting off the wings. When I left he was also leaving and I hoped no additional rays were caught.

Personally, I prefer to return the rays to the water and I hope most people adopt that philosophy.

<*}}}}}}}}}>< — One of the things that has changed over the years, especially during the summer “tourist season,” is the number of people visiting the pier — most of whom are non-anglers. That fact was most noticeable during a weekend visit in August of 2018. When I arrived early in the day the normal number of anglers was on the pier and the limited parking spaces were almost gone. It seemed it would be a typical day. But what turned out to be only a fair fishing day, one that might seem dull, was never that due to the crowds of people.

Literally thousands of bicyclists (my estimate) came riding down the bike trail from the Golden Gate Bridge and most seemed to stop by the pier to take a selfie of themselves with the famous bridge in the background. Many headed out onto the pier. Although most were speaking foreign tongues, I did have nice talks with several including a couple of couples from Taiwan and Norway. I always enjoy playing mini-tour guide and pointing out the history of the area where I am fishing and this day was no exception.

The number of visitors was amazing and given that most were wearing shorts and T-shirts it was obvious that they were not expecting the cold fog and wind by the pier (which, of course, is typical San Francisco weather for August). Of course years ago you didn’t have tourists renting bikes on Fisherman’s Wharf, riding through the streets of San Francisco, riding by Chrissy Field, and then heading up, on, and over the Golden Gate Bridge. At the far end they head down the bike trail to Fort Baker and most seem to stop before heading on to downtown Sausalito and the ferries that will take them back to San Francisco. I prefer a car. But it certainly made the day interesting.

<*}}}}}}}}}>< — As mentioned, the views from the bridge are always interesting and sometimes they are stunning. I always have my camera and sometimes I seem to be paying as much attention to my camera as to my rod — a bad thing for a fisherman.

I thought this contrast between a modern Sportfishing boat and an old-style junk was interesting.

Even the junk itself by itself, and the bridge, were interesting.

<*}}}}}}}}}>< — Given the usage the pier receives—anglers, tourists in cars looking for the perfect picture, and the thousands of  tourists (many who are foreign visitors) who come barreling down the bike path from the Golden Gate Bridge, you would think the park would want to put a good foot forward and leave a good impression for these folk. But perhaps they simply forgot the port-a-potties that sit just a short distance from the pier? There is often a line of people waiting to use the portable outhouses and when they exit the same they are generally holding their noses and warning those in line to be prepared for the stench and filth. The last time I used one of the port-a-potties I noticed a sign that said: “dumping of hazardous material (in the potty) is a federal offense. In my mind the potty itself was a federal offense! It certainly is an embarrassment for the federal government that oversees the park and pier.

History Note.  In the 1850s the Lime Point Military Reservation was established to protect the entrance to San Francisco Bay (and it is the oldest of the forts on the Marin Headlands). In 1897 it was renamed Fort Baker. Although diminished in importance after World War I, it would still later serve as the World War II Mine Command Headquarters and the Air Defense Command Headquarters. 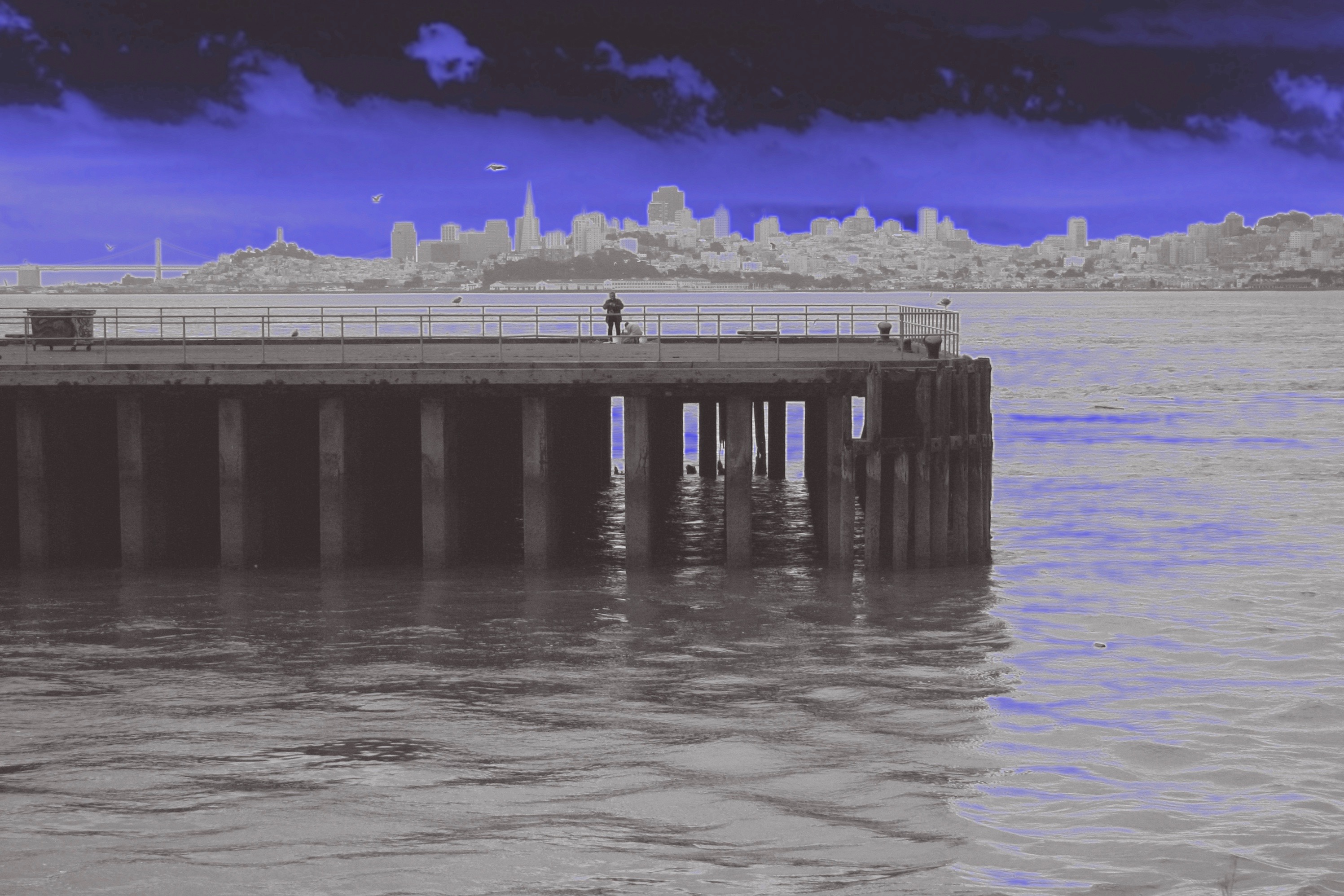 Hours: Gates entering the area are posted as opening at 7:00 A.M. and closing at 5:00 P.M. However, the gates are left open and many people fish on the pier at nights for sharks and rays. (Although there are periodic closures during terrorist alerts).

Facilities: Few! There is limited free parking at the foot of the pier (nine spaces) and some cars can park along the road itself. Probably no more than 20 cars can park altogether although there are additional parking spaces by the museum. There are no lights, benches, or fish cleaning facilities. Just up the street, less than a block away, is the Bay Area Discovery Museum, a good place to take the kids if they tire of the fishing.

Handicapped Facilities: Handicapped parking (one space), the surface of the pier is asphalt, and the railing is 52 inches high.

How to Get There: Take Alexander Avenue off of Highway 101. It is the last exit before driving onto the Golden Gate Bridge going south, and the first exit after the vista point going north. Take Alexander Drive exit and merge onto Sausalito Lateral Road, make first left onto Bunker Road, turn right and stay on Bunker Road (do not pass through the tunnel) down the hill. At the stop sign turn right onto Murray Circle till you see Moore Road. Take Moore Road to the pier.