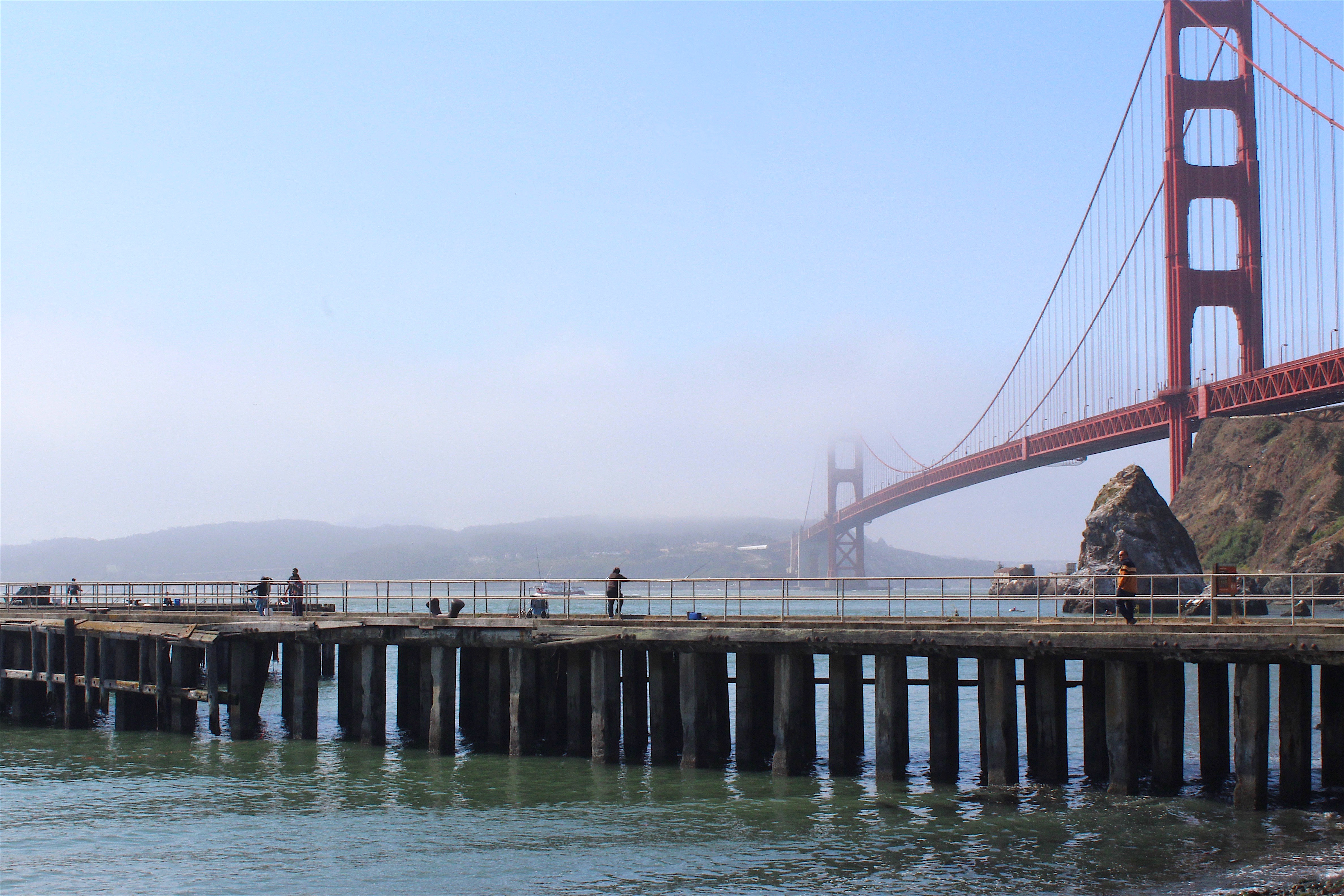 Like its counterpart across the bay, the Fort Point Pier, this pier offers not only decent fishing but one of the world’s most interesting and beautiful views. Look up to your right and you are looking into the Golden Gate Bridge, one of the world’s greatest engineering feats when constructed in the ‘30s. Look across the bay and you see San Francisco, “The City” to locals, and a magical destination for many.

The Pier and “The City” across San Francisco Bay 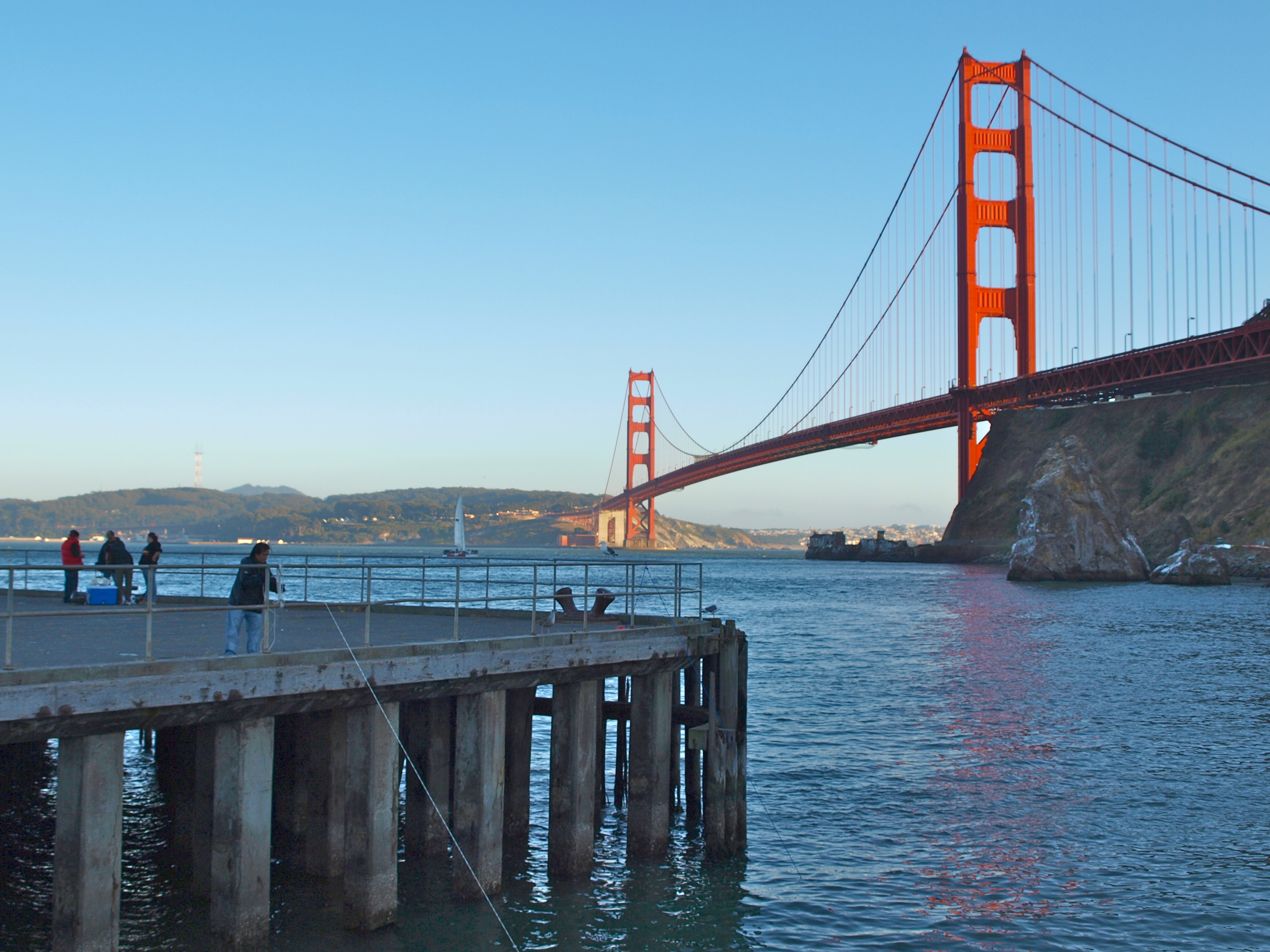 Look at the bay and you will see Angel Island, Alcatraz, and an unending number of boats, everything from the smallest sailboats to large luxury liners and even larger oil tankers. 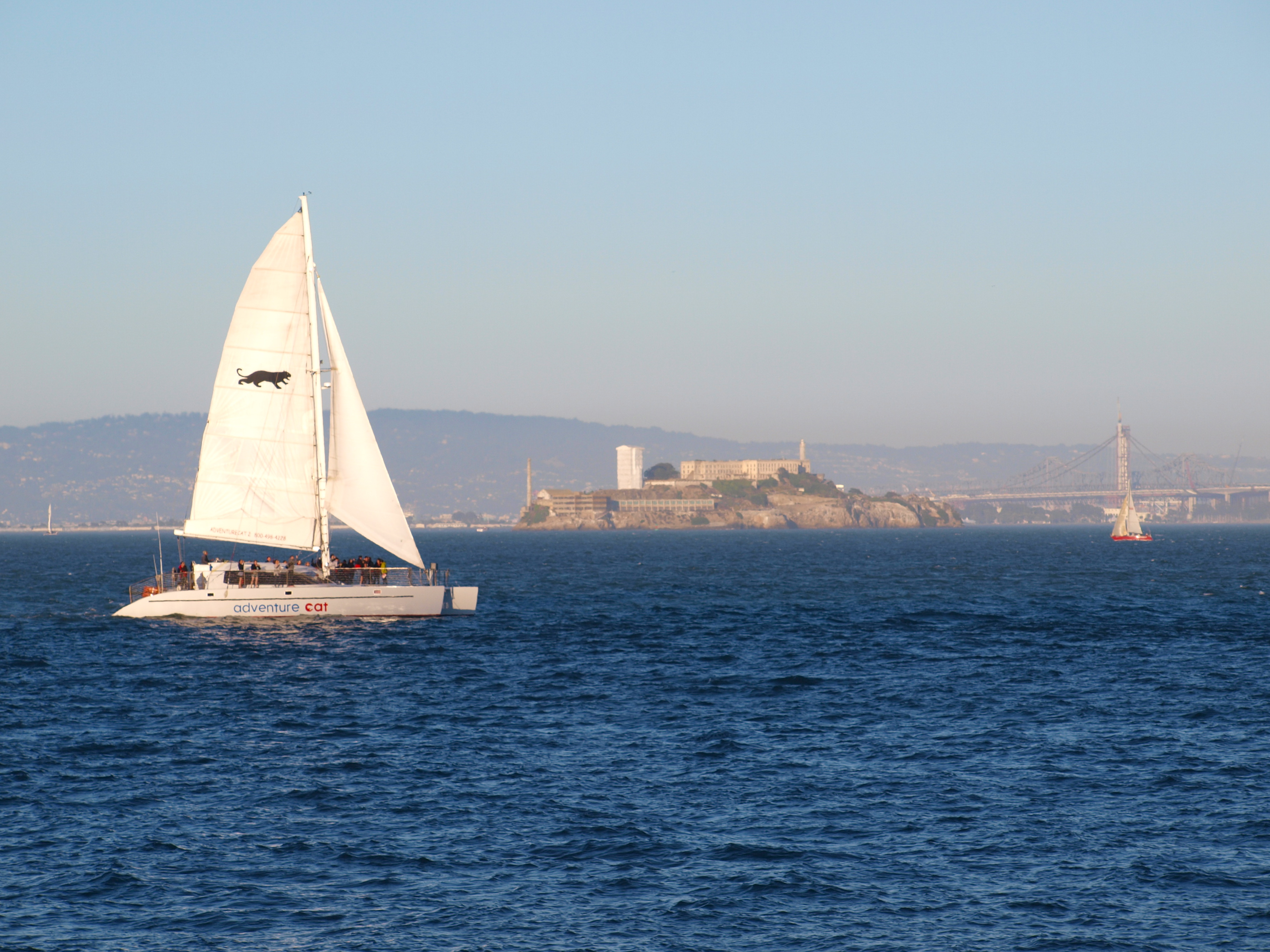 Consider the waters of the bay itself and imagine the energy that is channeled through the mile-wide width and two-hundred-feet depth of the Golden Gate. The result is a powerful stream that is buffeted and shaped by the contrasting forces of nature—river flow rushing down to the sea from inland California streams, tidal waters that push in and then pull out on a twice daily basis, and powerful winds that roar in off the Pacific. The resulting waves, eddies, and whirlpools can surprise even the most experienced mariner.  Imagine what life is like for the fish that live in that environment. It is hard to fish from this pier and not recognize that San Francisco Bay is one of the world’s greatest bays. 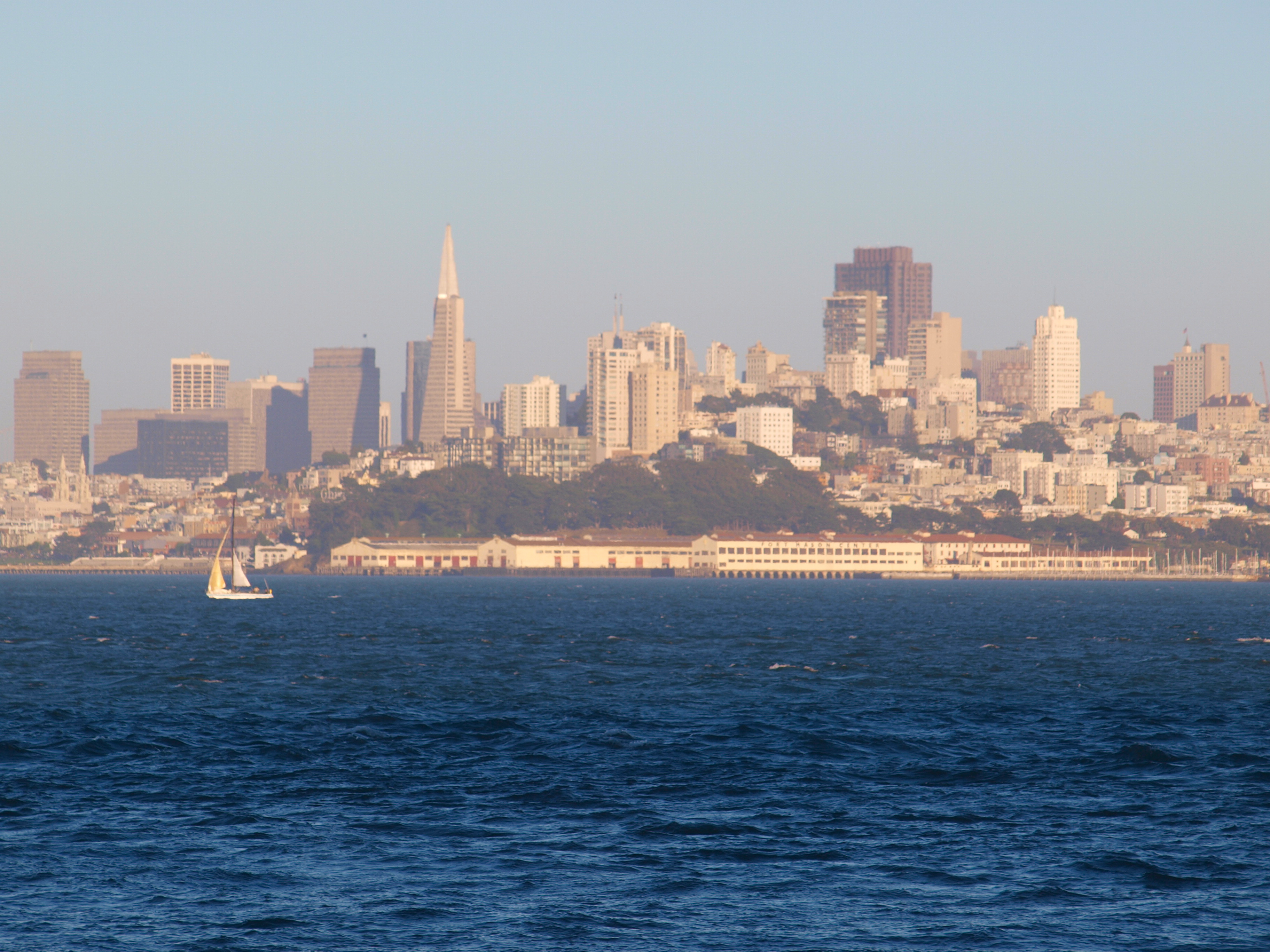 Of course there are many days when you can see little but fog as it moves in through the Golden Gate. Carl Sandburg, one of my favorite poets, wrote the following —

It sits looking over harbour and city

on silent haunches and then moves on.

The poem doesn’t seem to match what’s seen here. Here the fog comes crashing in with ocean’s fury, rushes through the Golden Gate, and envelops the bridge, the bay and “The City” across the bay. It can pound the senses, make a summer day feel like an Arctic night, and pierce even the heaviest coats. At times it can seem to lend an almost surreal feeling to the entire area. But then it can lift, the sun appears, and a magnificent scene surrounds the angler. The always changing scenes and pictures are one of the attractions of the pier. 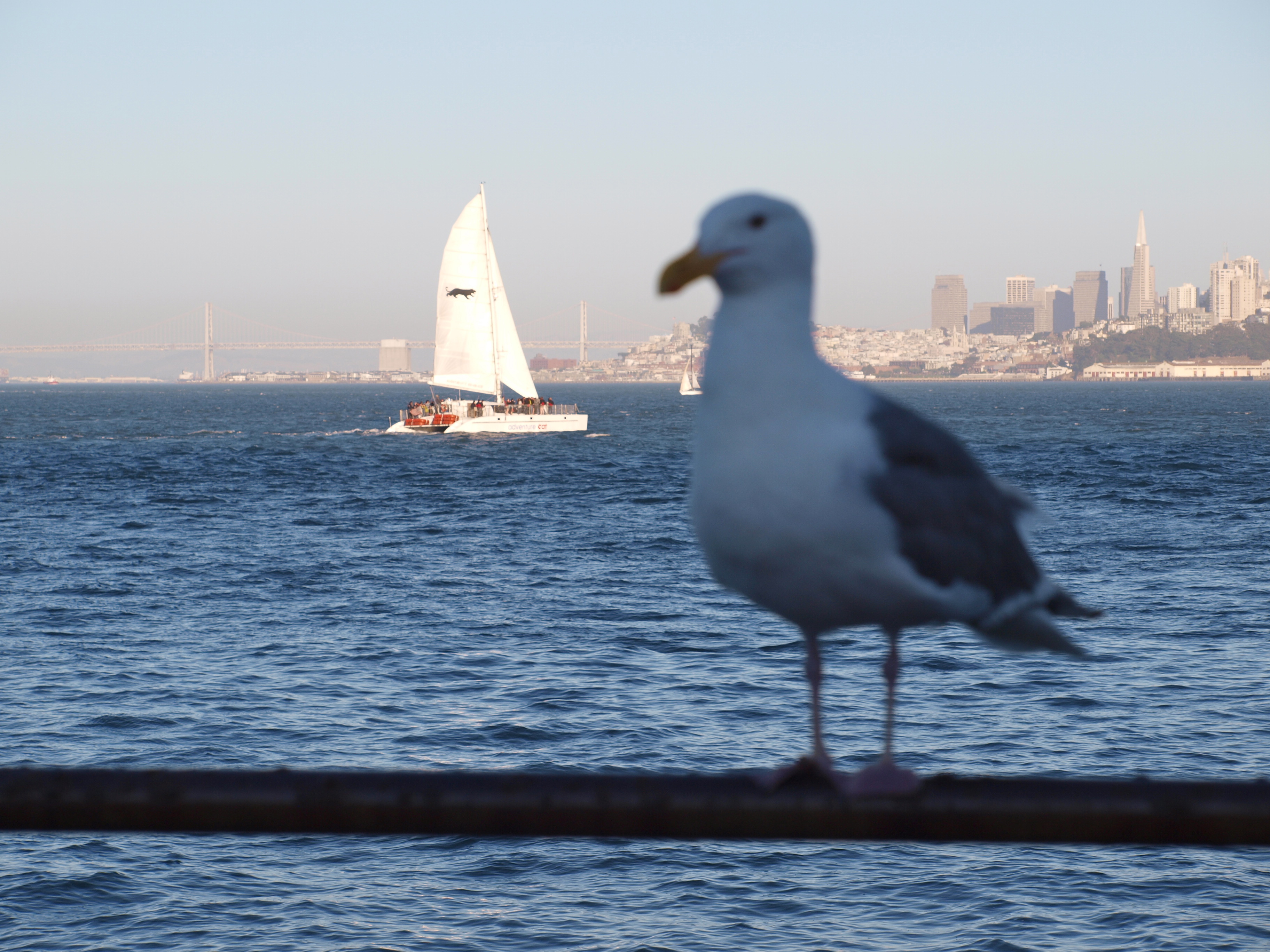 Environment. This area is part of the Golden Gate National Recreation Area, a park of more than 38,000 acres that sits on both sides of the Golden Gate Bridge. The pier sits at the western corner of Horseshoe Bay/Horseshoe Cove, a Coast Guard station (of types) is located just a short distance from the pier, and across the bay/cove sits the Presido Yacht Club that is protected by the  Satterlee Breakwater, an excellent fish-rich jetty used by shore anglers.

The pier itself is a former military wharf built at the south end of Horseshoe Cove/Bay which gives reason for a couple of alternate names, its original name the East Fort Baker Mine Wharf, and the Horseshoe Bay Pier. It’s also at times been called the Moore Road Pier. Although the current pier dates to 1937, wharves of various size and purpose have been located on the same site since the 1870s.

At times the pier was dilapidated and in danger of being torn down. Today, it has been renovated and seems in good shape although it’s a little smaller than the original wharf. Up until the mid ‘80s there was a L-shaped main section to the pier and a smaller concrete pier on the west side; together they created a U-shaped pier. The concrete pier is gone but the surface has been improved and railings added which makes it a safer pier for children. This is good news because the pier at times offers better than average angling. 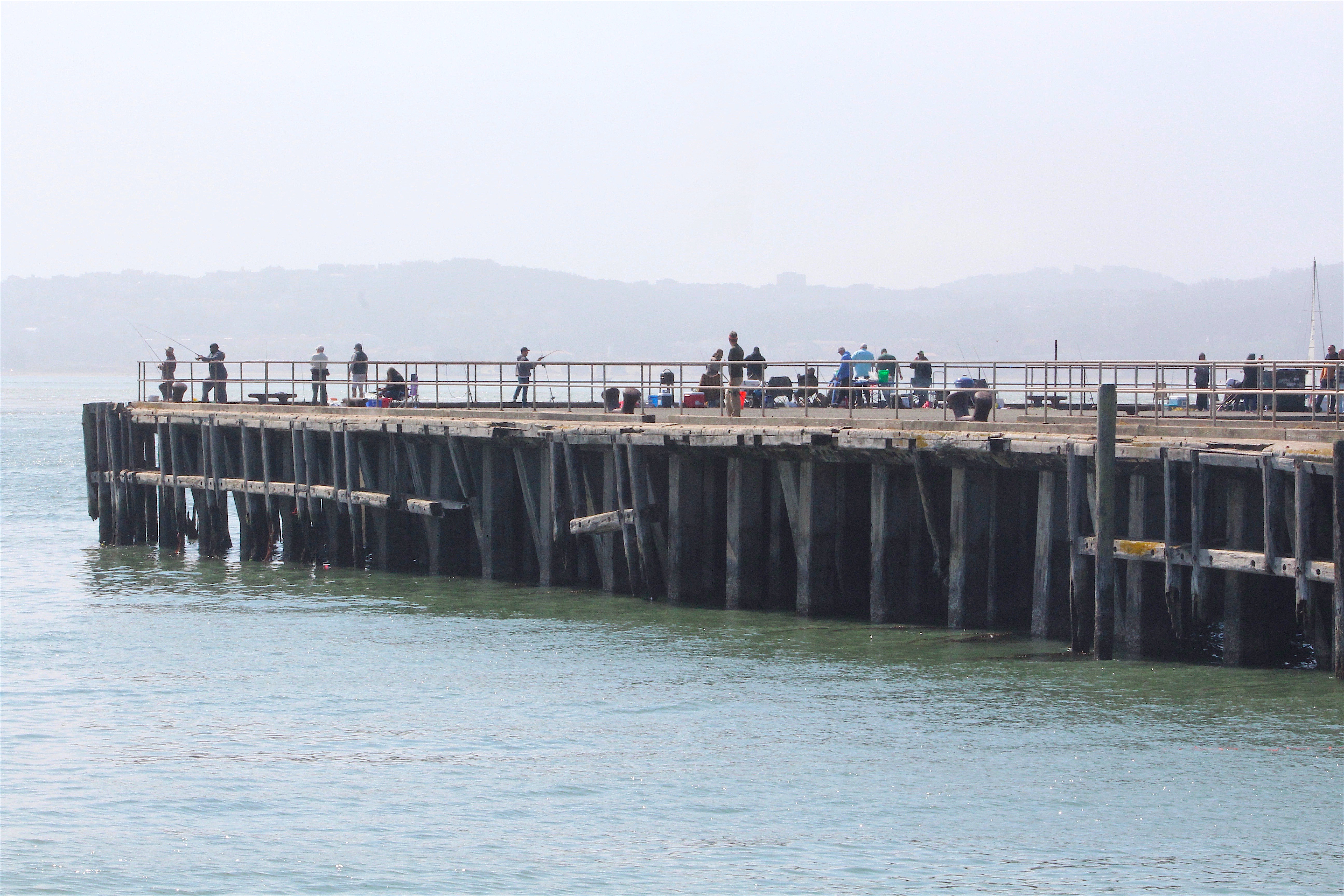 Most of the bottom around the pier is sand and mud, although the inshore section offers a rocky shoreline on the west side and a pebble beach on the east side. 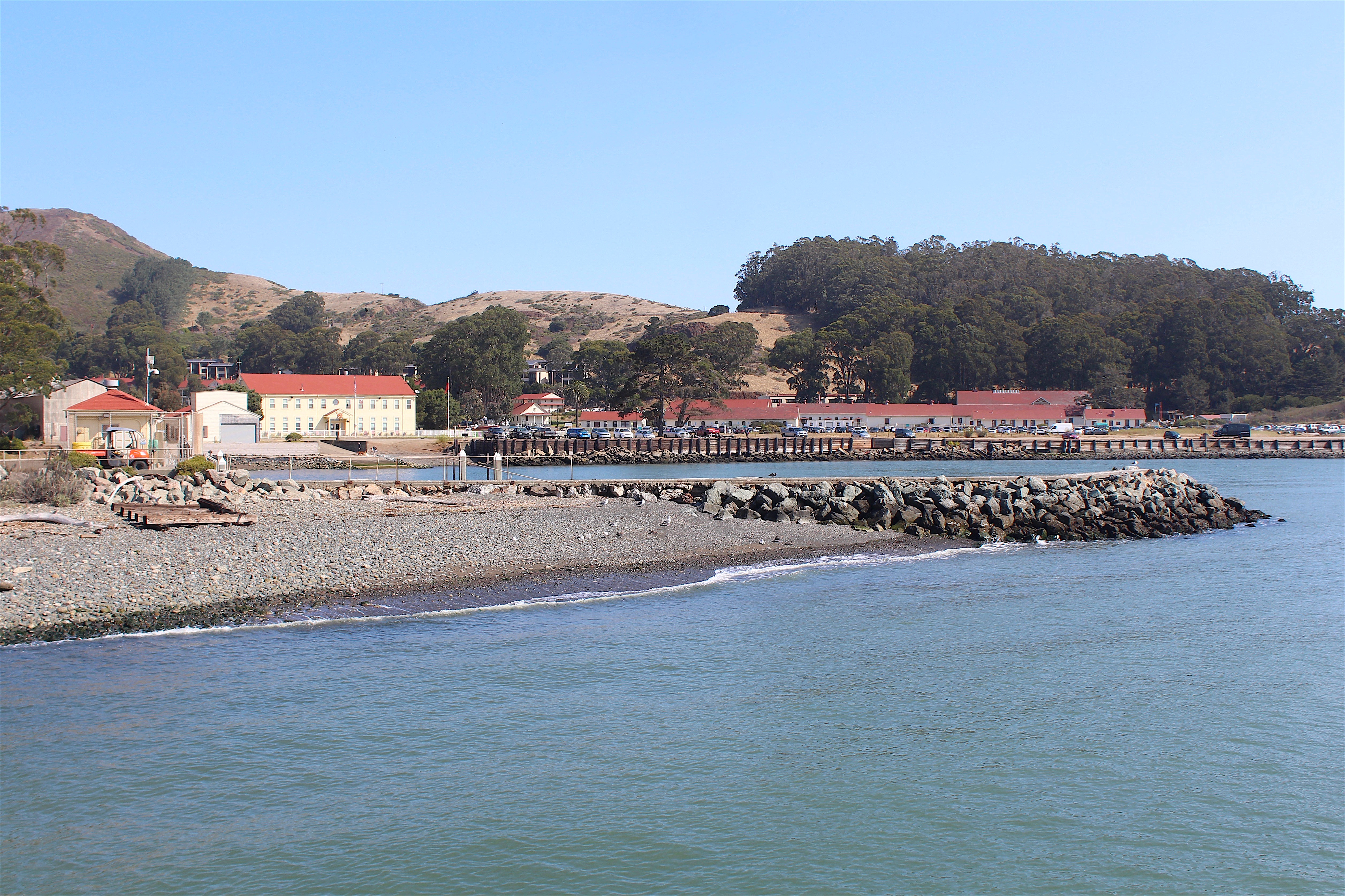 The pebble beach to the left (east) side of the pier 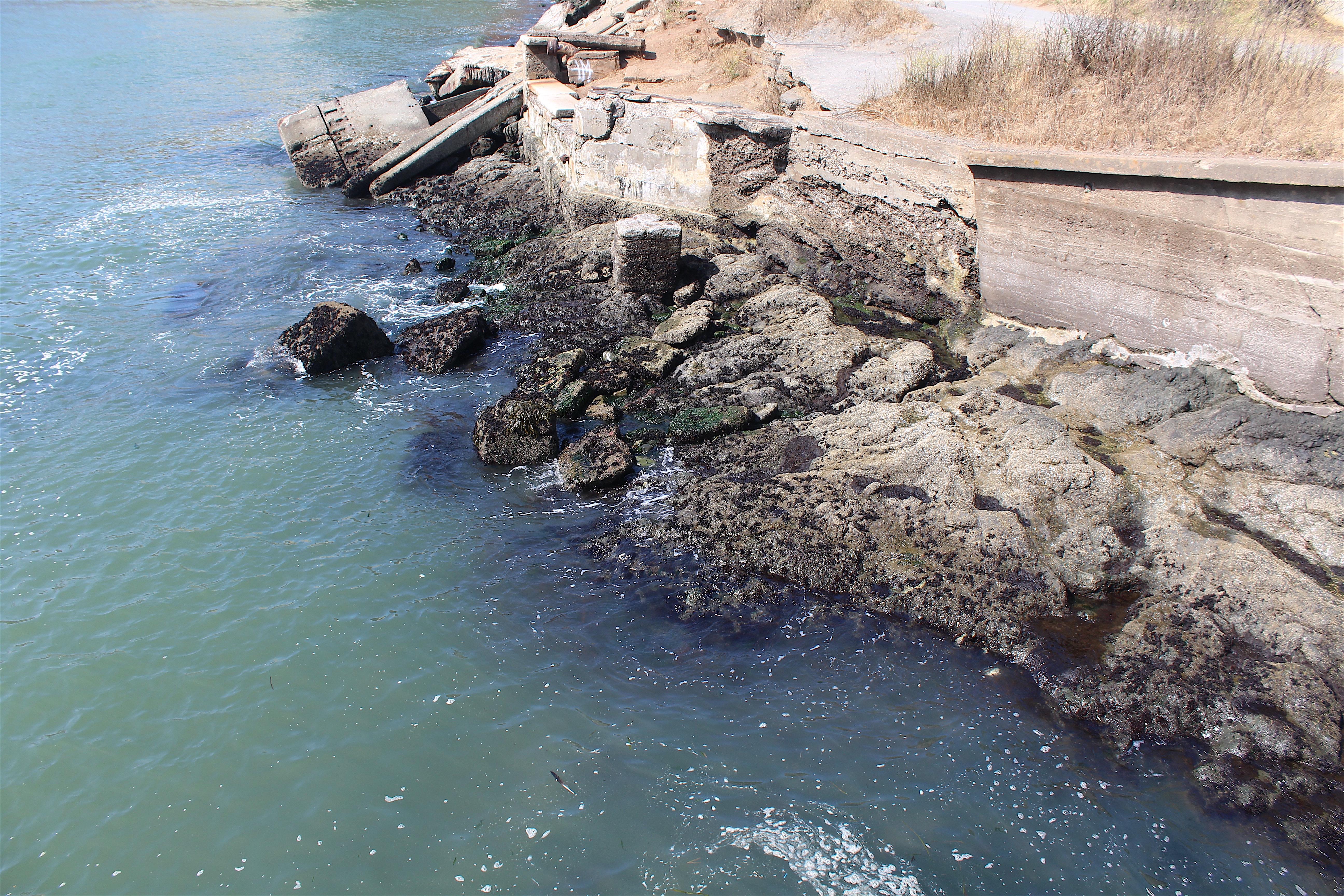 Shoreline rocks to the right (west) side of the pier

Jacksmelt are one of the mainstay fish at the pier and casting out from the end, away from the pier, is generally the best spot for the large silversides (they’re not true smelt).  Strong currents sweep in and out through the Gate, pass by the rocky Point Cavallo, and head down shore to Sausalito.  Jacksmelt seem to follow the currents around the point and past the pier and on good days lucky anglers will fill buckets with the large and tasty smelt. 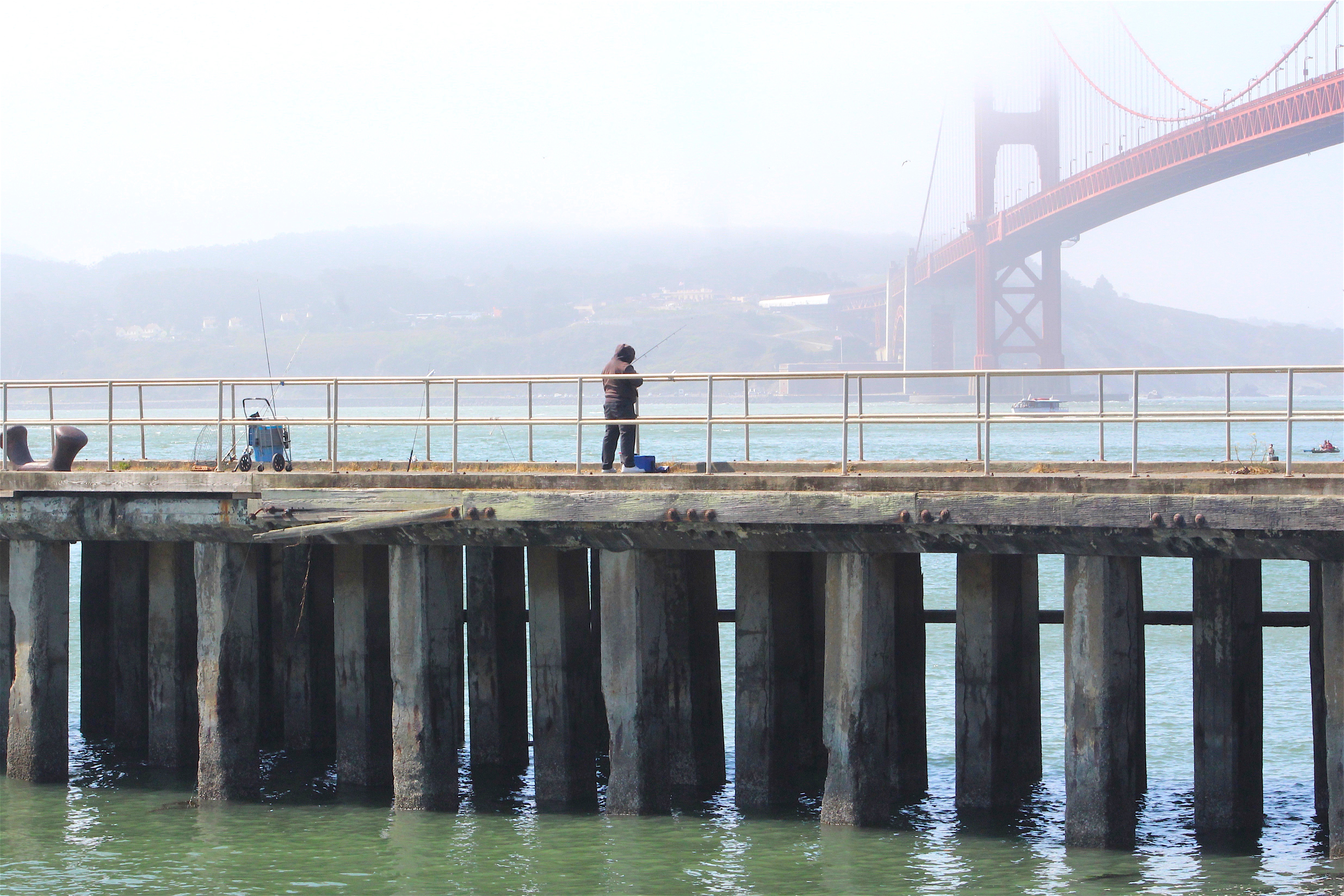 The end section and its deeper water is also the main area where the “sharkers” seek out the large sharays in  the bay — the sharks and rays (mainly bat rays) that call the bay their home.

Although large leopard sharks and soupfin sharks are somewhat common, large bat rays aka mud marlin are usually the main and largest catch. Many of the old mama bat rays (all big ones are females) will be caught in the 50-75 pound range and some may even approach or exceed 100 pounds in weight. The fight of these large mud marlin can be exciting and exhausting. 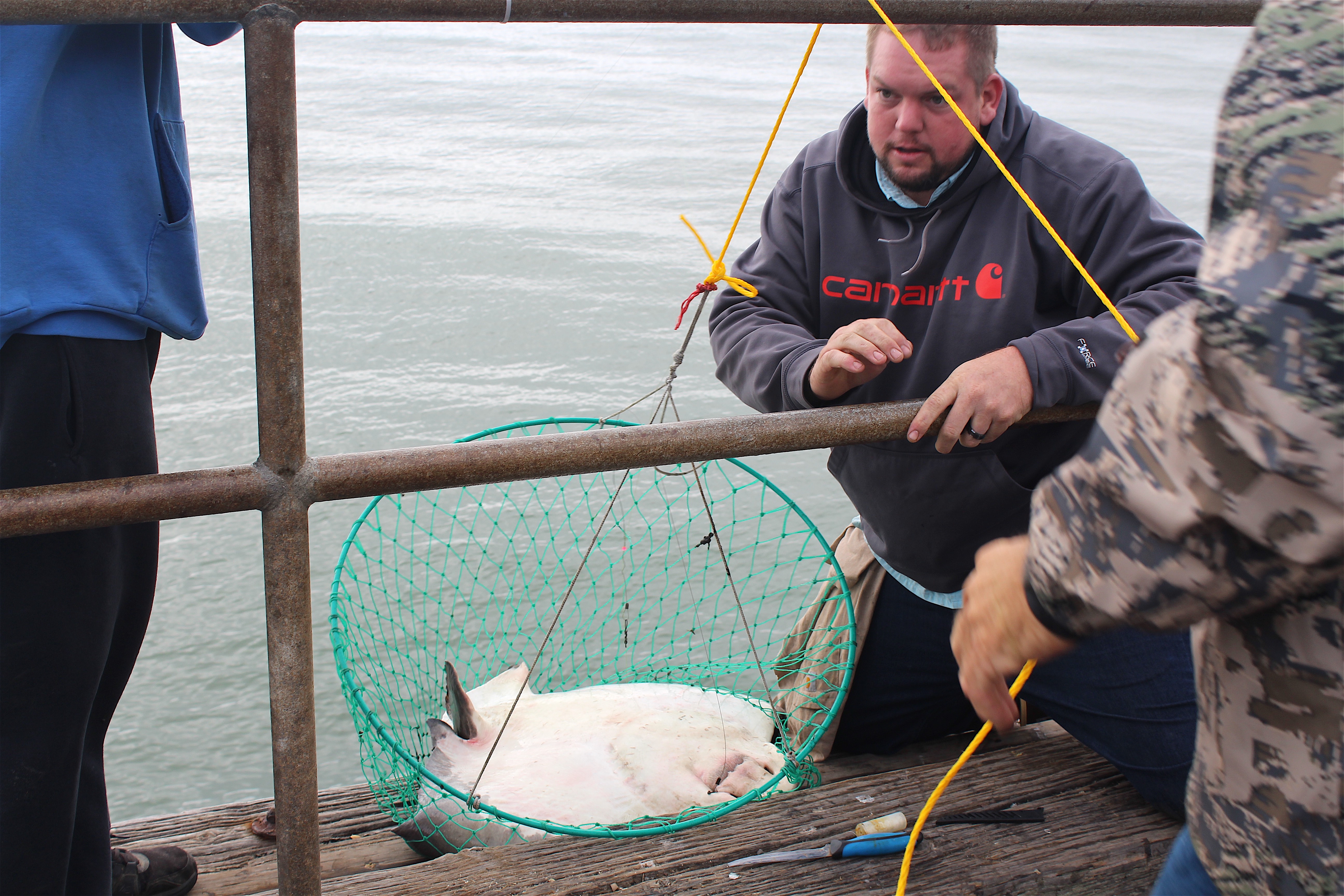 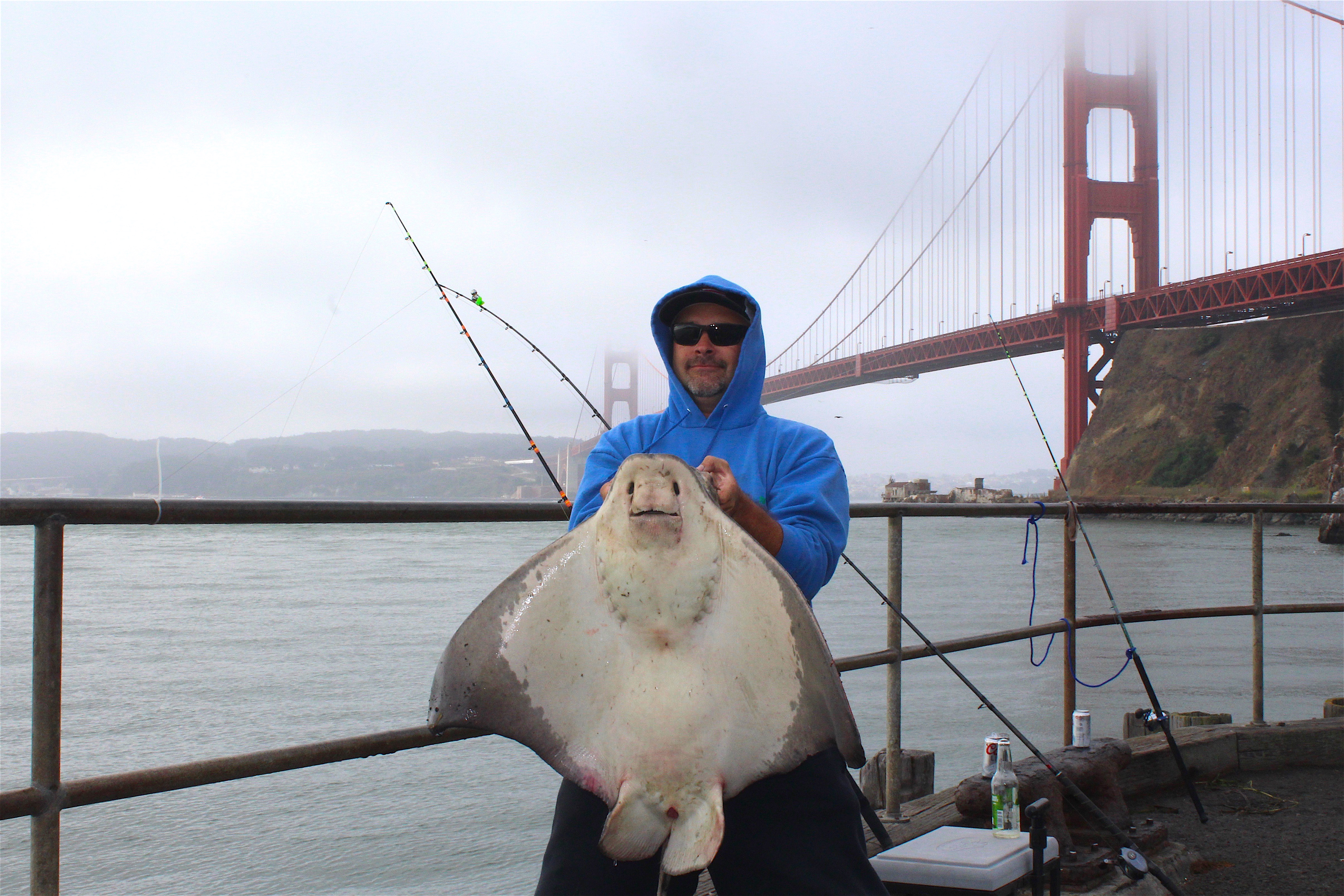 The end section is also preferred when the sanddab show up and when present the end section of will be filled with anglers seeking out the small flatfish.

Under the wide section of the pier are hundreds of concrete pilings and most are covered with barnacles and other growth. Here, under the pier, and towards the old concrete pilings is the area to fish for a wide variety of perch, small rockfish and an occasional cabezon or lingcod. 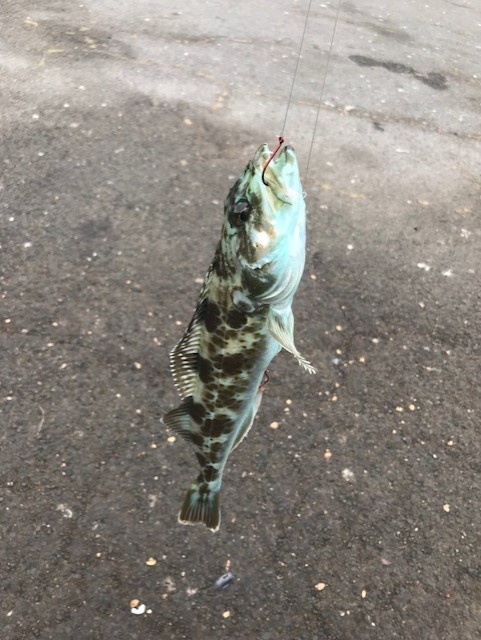 Inshore, about one third of the way out on the west side of the pier is a primo spot for perch. Regulars say it’s the best spot for the larger rubberlip perch and blackperch. 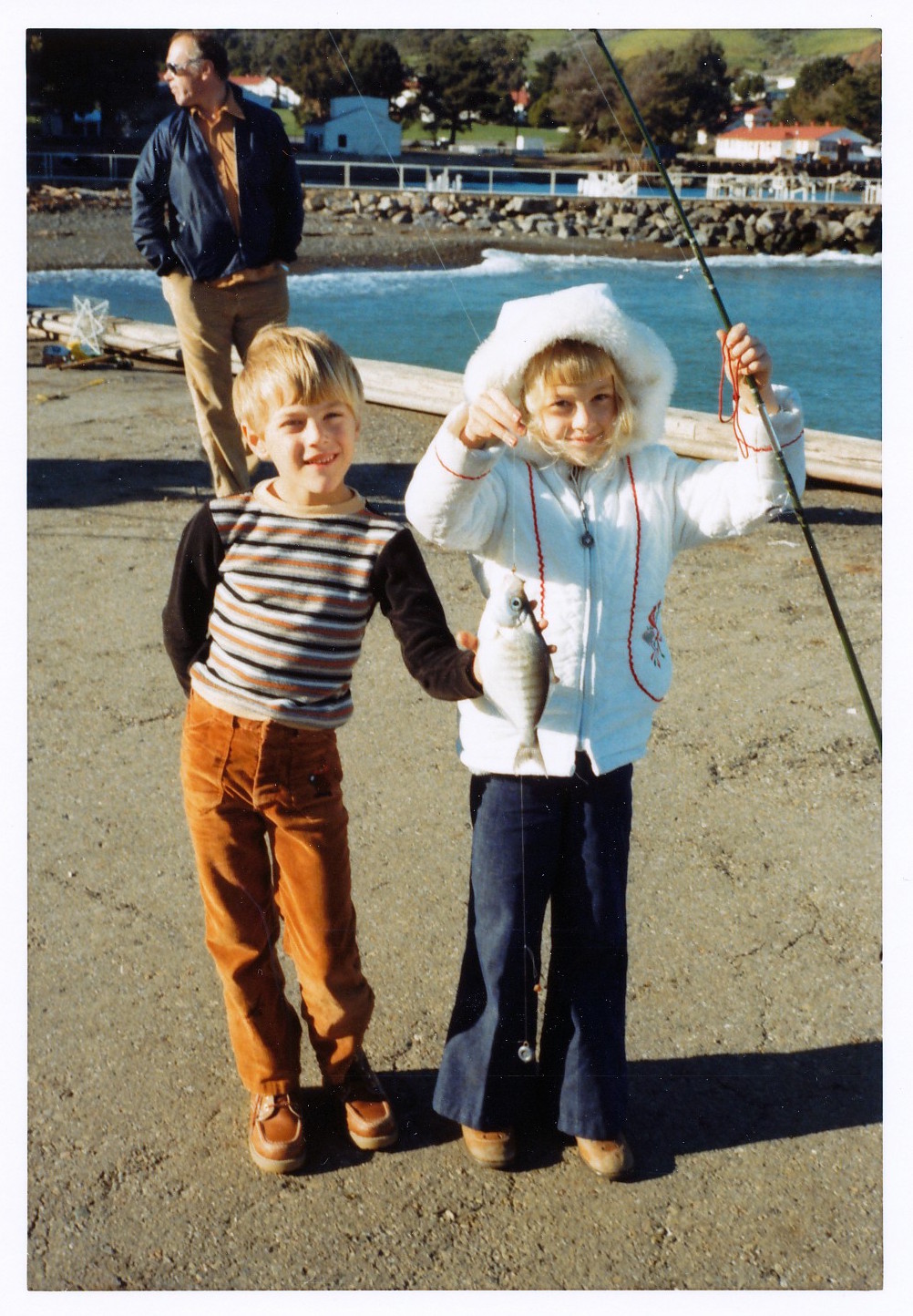 Fishing Tips. For most species of perch, fish straight down or underneath the pier. Use a light line, size 4 to 8 hooks, and most important, use small pieces of pile worms, shrimp, or fresh mussels for bait. If you want, overturn some inshore rocks and grab some of the small green rock crabs, they also make good perch bait. 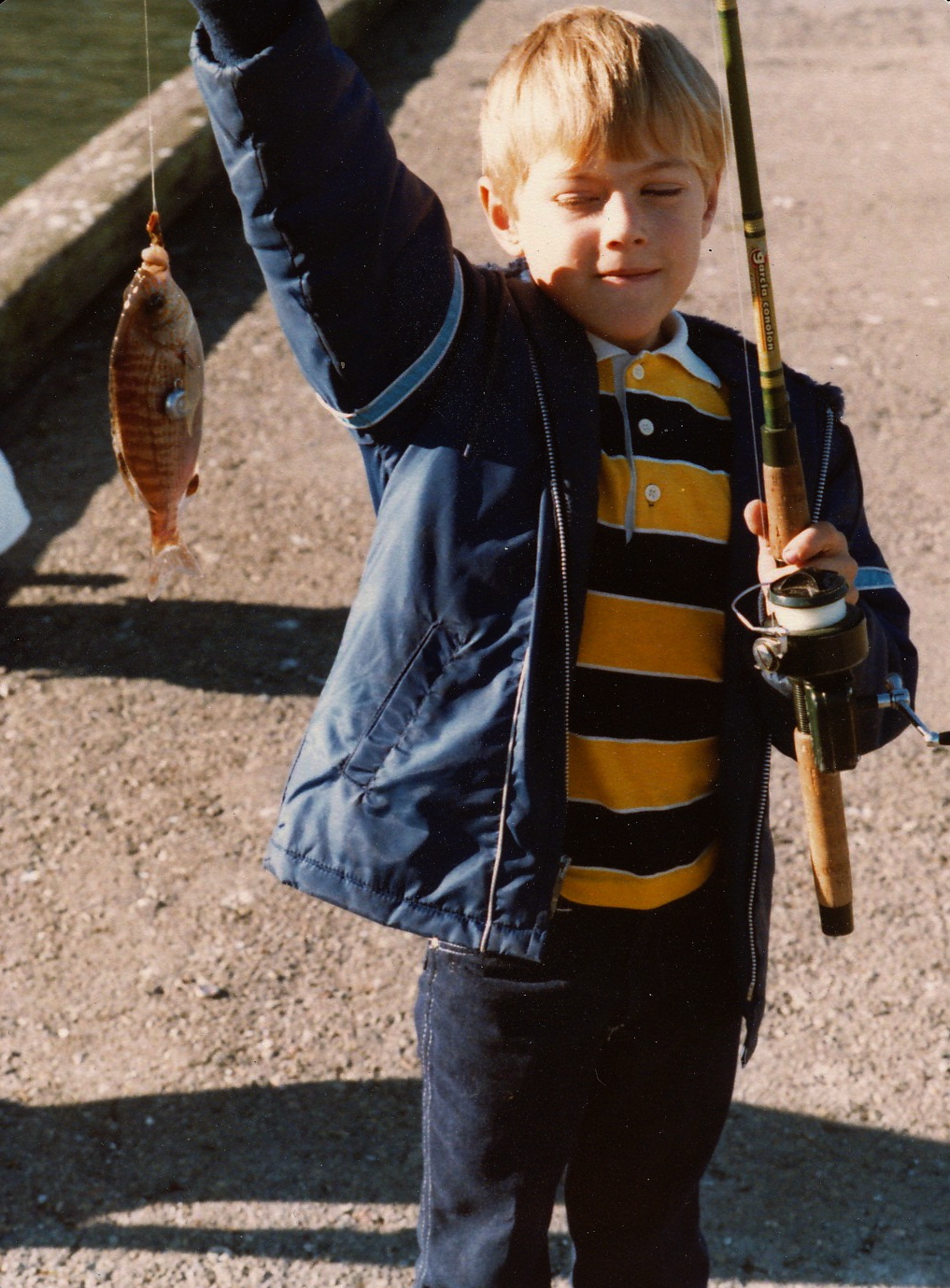 My son Michael with a rainbow seaperch

During the winter and early spring you may catch pileperch, rubberlip seaperch, striped seaperch, rainbow seaperch, and an occasional redtail or calico surfperch. Almost any time of the year may yield blackperch (called pogies by locals). 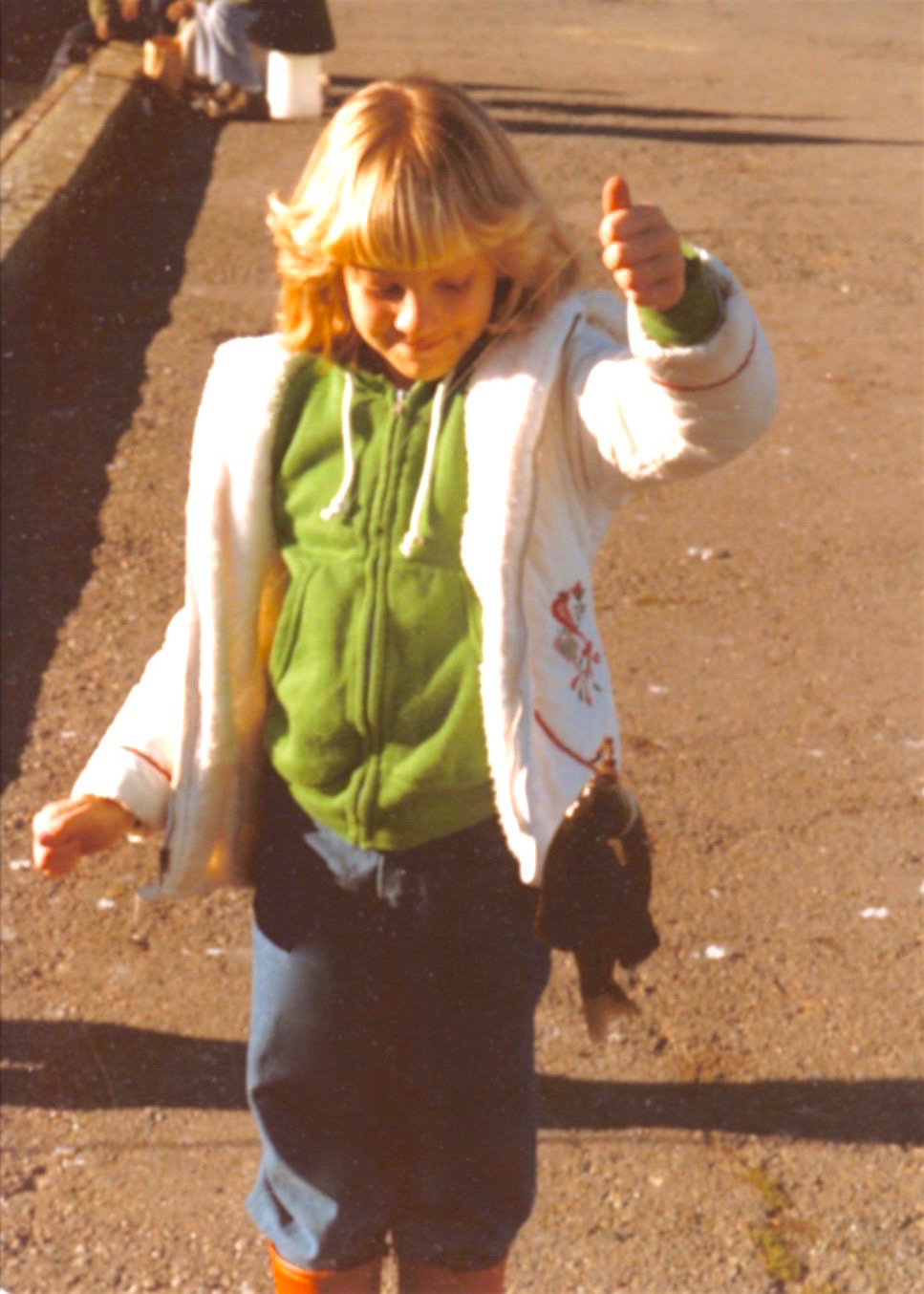 My daughter Kim and a blackperch — 40 years ago

For all of these perch species, use a high-low set-up and fish on the bottom around the pilings. If bait isn’t producing any bites try lures—plastic grubs or small spoons—and simply jig them up and down in the water near the bottom. Root beer or oil-colored grubs can be deadly as can small 1/12 or 1/8 oz. chrome, chrome with blue, or chrome with green Kastmaster spoons. 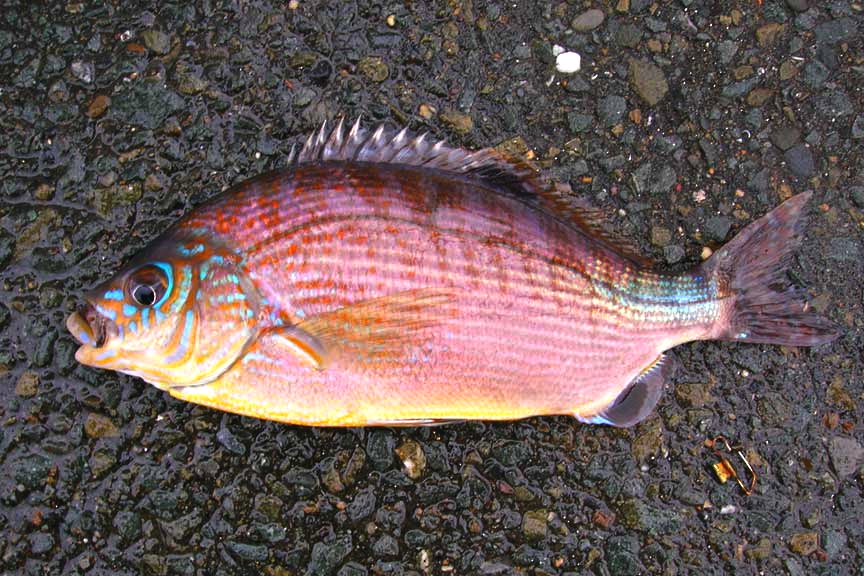 Later in the year, spring to fall, seems to be the best time for walleye surfperch and silver surfperch (although the perch closure  in the bay means no perch excepting shinerperch from April 1 to the end of July). For these smaller perch, use a small piece of anchovy and fish mid-depth, or let your line sink to the bottom then slowly retrieve the line all the way to the top. Almost any time of the year can also yield white seaperch but these seem to hit best with a short cast away from the pier on the left (east) side of the pier. 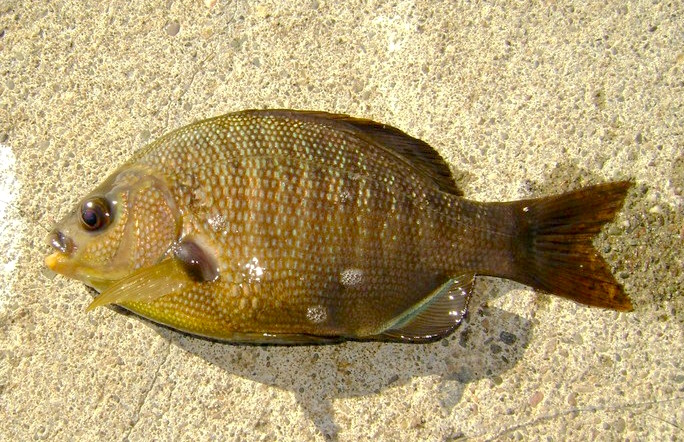 The same bait and riggings will also yield a lot of undersized bottomfish when fishing under the pier; this is hard to avoid but does yield some interesting variety. Included in my catch have been cabezon, kelp greenling, black, blue, gopher and brown rockfish, smoothhead sculpin, scalyhead sculpin, onespot fringehead, and blackeye goby. Occasionally a larger than expected lingcod will grab an angler’s line which of course can also attract a larger than expected mob of onlookers. 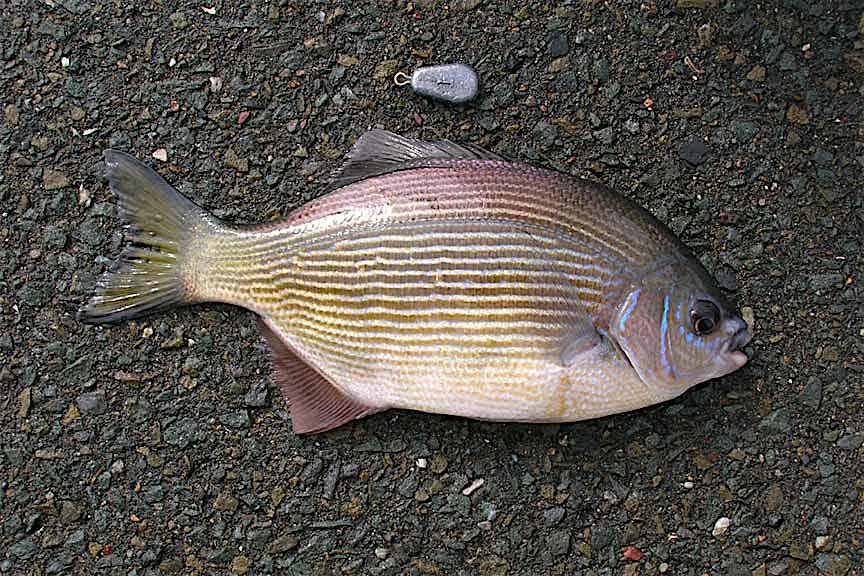 Fishing close in to the shore, in fact right up by the rocks, will sometimes yield a blackperch or a rubberlip perch and can surprise you with a monkeyface eel. However, do watch your line closely because the fish will typically hit and head straight under a rock. It’s easy to lose gear, even when it’s nothing but a baby cabezon, kelpfish, or other interesting rock-infesting creature. 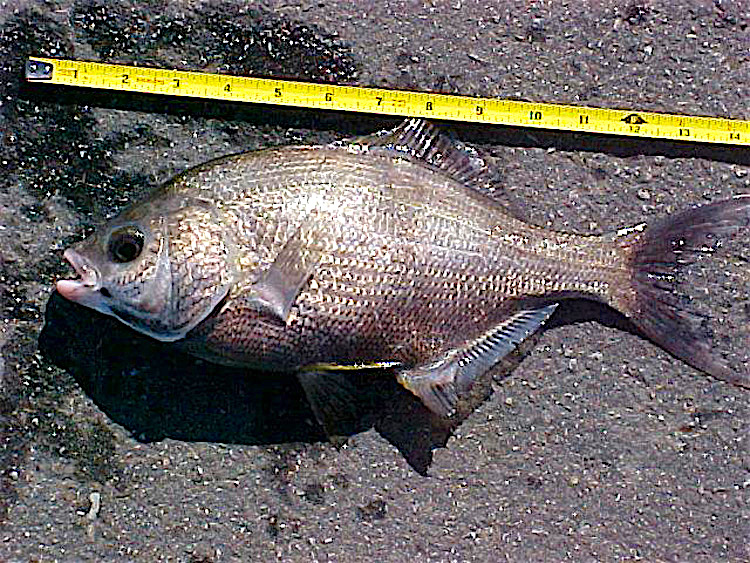 Casting straight out from the pier or to the right is less productive but does yield some fish; most common are jacksmelt but sometimes you’ll also encounter kingfish (white croaker), true tom cod (in the summer), small rockfish (primarily brown or grass rockfish), and a variety of flatfish — starry flounder, Pacific and speckled sanddab, sand sole and English sole. For most of these, a small strip of anchovy seems to work best, although the starry flounders also like grass shrimp. Rigging typically is a simple high/low or the plastic fish finder rigs. Do keep the hooks reasonably small, i.e., size 4. 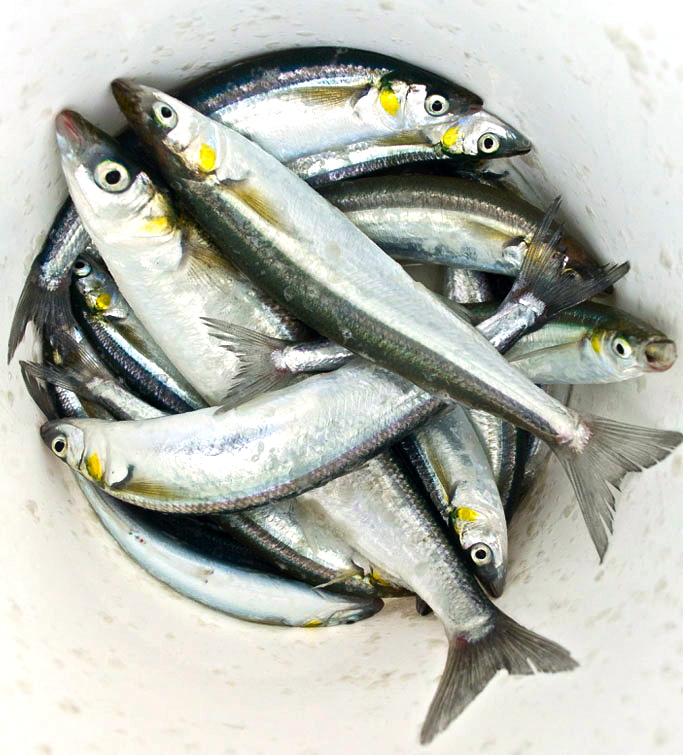 Some years (usually wet-water years) will see huge schools of sanddab invade the local waters during the winter months (December-January); when they do, anglers may catch a fish on every hook, on every cast. Families will flock to the pier and five gallon buckets will be overflowing with the small, but tasty, flatfish. The typical rigging simply has two or three small hooks (size 6 or 4) on dropper leaders above the sinker. Best bait is often pile worms but pieces of market shrimp, cut anchovy, and even strips of squid will usually work. Squid by the way may be the best protection against the crabs but when the sanddab are present you can expect bites almost as soon as the bait is on the bottom. 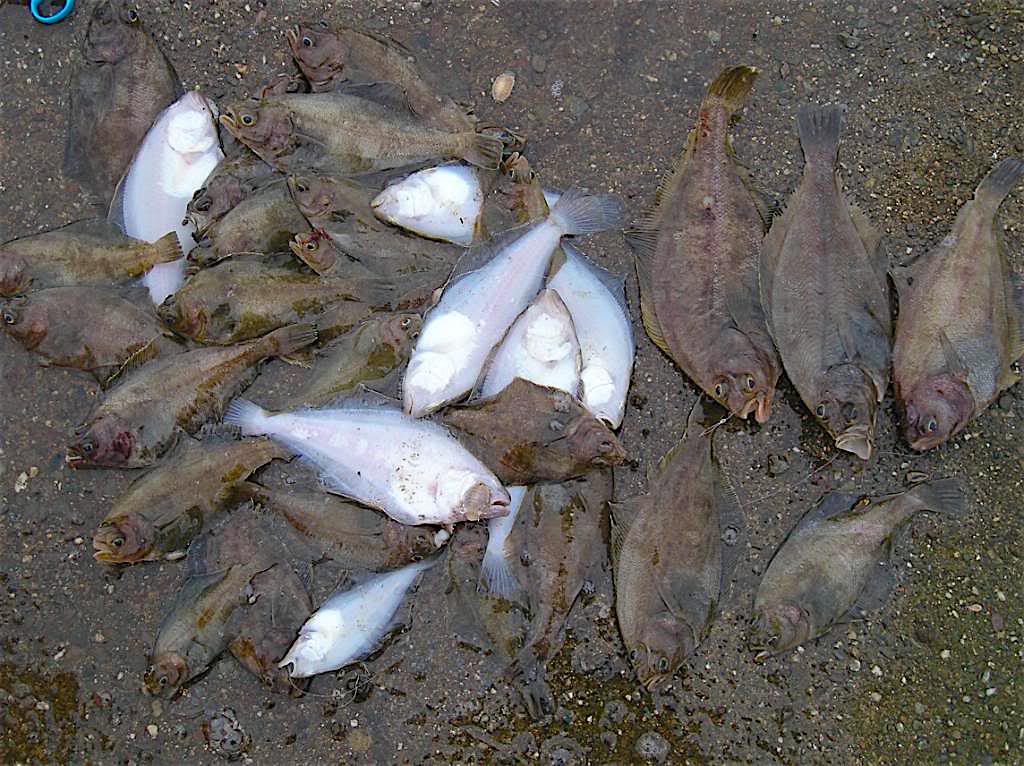 For jacksmelt, use a fairly heavy rigging, attach three size 8 hooks to your line (spaced about eight inches apart), use enough weight to cast away from the pier, and finish with a large bobber, balloon or float (most anglers use Styrofoam) that will keep your rig near the top of the water where the jacksmelt like to hang out. When fishing is good, fishermen will pull in a jacksmelt on nearly every hook and some of the “horse” smelt will reach nearly fifteen inches in length. Although found in the area most of the year, wintertime can be especially good. That’s when Pacific herring (usually) move into the local waters to spawn. Large concentrations of jacksmelt will be close behind perhaps hoping to dine on a few of the herring eggs. It’s one of the best times to use artificial lures on the jacksmelt, with anglers primarily using small spinners and spoons. 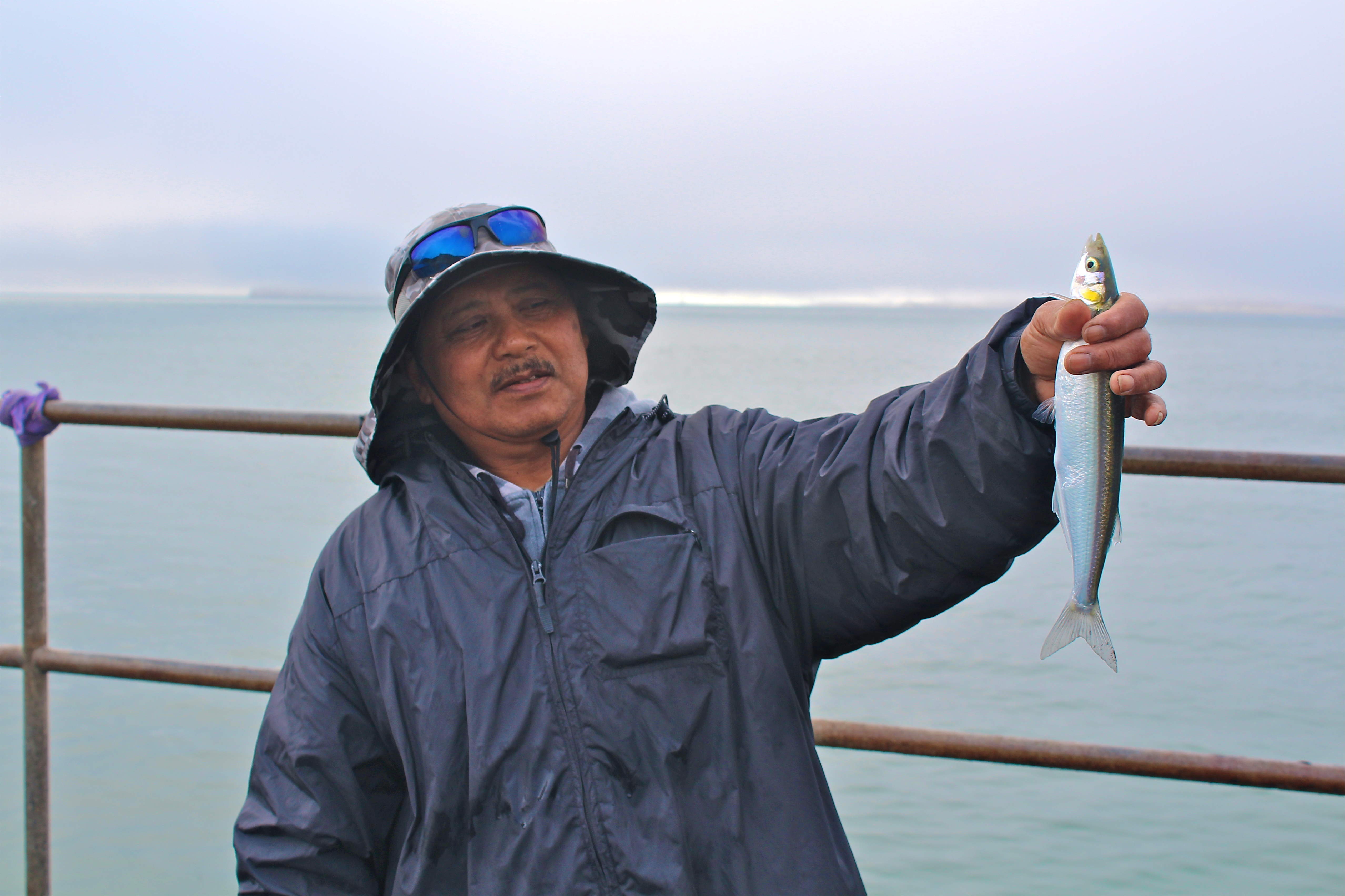 Although the pier is primarily a pier for jacksmelt, perch and crabs, big fish do show up. This is an area that sees some striped bass, salmon and sturgeon caught most years.

The pier would seem to be an ideal area to catch striped bass given the number taken by Sportfishing boats in the area. But, the pier has never reported large catches of Mr. Lineside nor really large bass (the largest I’ve seen reported being a 27-pound fish). Nevertheless, a few are caught each year, with most being caught by anglers using  live bait such as anchovies, shinerperch or bullheads (staghorn sculpin). The best spot seems to off the far right corner of the pier or along the right side. Artificial lures can also be used if there are not too many other fishermen present. Check local tackle shops to see what has been working for anglers casting from shore.