Luckily, the anodyne scene served as a soothing balm for the somewhat desultory catch that I recorded, one made up mainly of small spotfin surfperch, mid-sized jack mackerel, and a lone giant jacksmelt (one of the largest I have ever seen).

<*}}}}}}}}}>< — I’ve heard some anglers call the town Yucos and thought they simply were shortening the town’s name. But, I’ve only heard the pseudonym used when the fishing was—yucky. Just wondering… is it only a fisherman thing?

<*}}}}}}}}}>< — Although Cayucos has long prided itself on its small town charm and atmosphere, its California-style joie de vivre and beach-town Weltanschauung carry a price. Rare is the home that is any longer affordable for the average citizen. To   make matters worse, Cayucos has been discovered. When a national magazine, in this case Men’s Journal, can rate it as one of its 25 favorite “hideouts and secret spots,” it no longer qualifies as a hideout or as a secret spot. 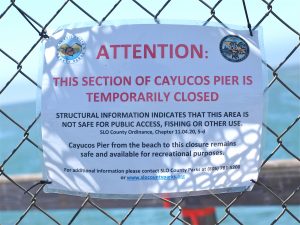 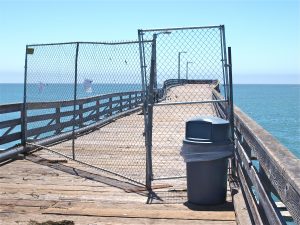 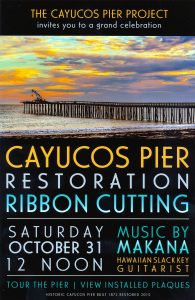 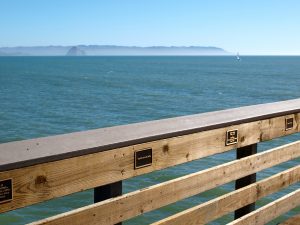 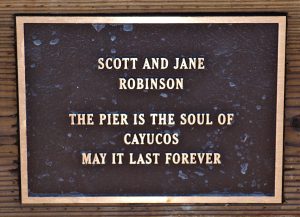 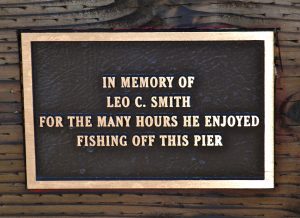 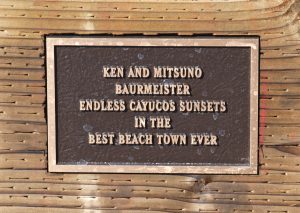 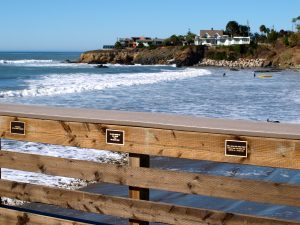 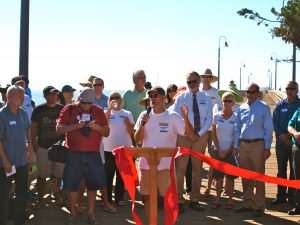 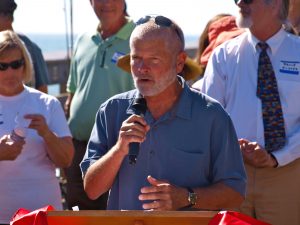 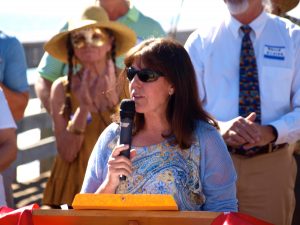 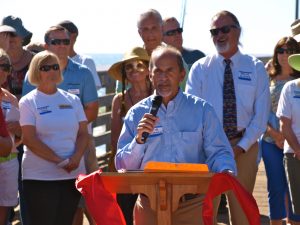 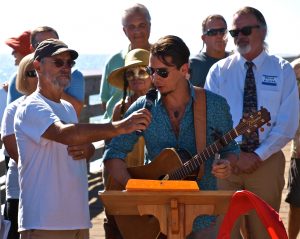 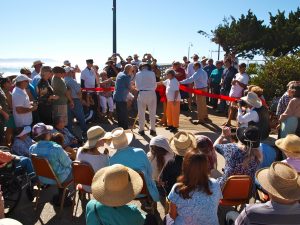 Of course there were many who cared little for the festivities, they simply wanted to stroll the new pier — or to fish. And, I made sure I got in a few hours of fishing after the hub bub died down (with little success). 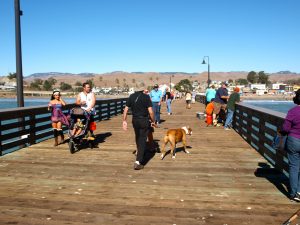 Strollers on the pier — 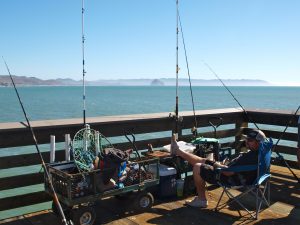 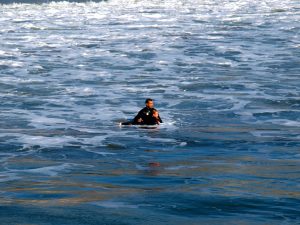 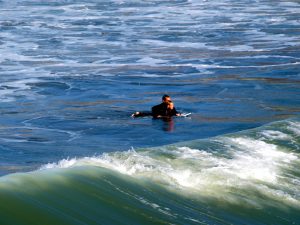 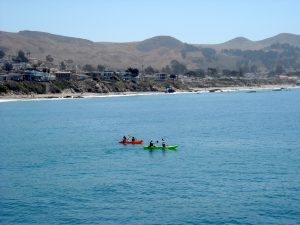 And Kayakers — it was truly a happy day for all!

History Note. The name Cayucos (pronounced Ki-YOO-cos) apparently derives from the Spanish word cayuco, which means a fishing canoe. It was a Spanish rendering of the Eskimo word kayak and apparently referred to the bidarkas of the Aleuts who were employed in hunting sea otter along the California coast.

Much of the history of the wharf at Cayucos traces back to Captain James Cass, an English-born sailor who had come to San Francisco in search of gold but who settled in the area in 1867 on part of a Spanish land grant called Rancho Moro y Cayucos. Although he had claimed 360 acres of government land, he quickly discovered that he had little interest in farming. Instead he started a lighting business employing small boats to transport goods (and people) from the coastal steamers through the surf onto the shore.

The lighters however were always inefficient and at risk due to an unpredictable sea. Cass soon partnered with Captain John Ingalls to construct a 380-foot wharf in 1870. The wharf, generally known as Cass’ Landing, allowed Cayucos to become the shipping center for dairy farms that shipped their dairy products (milk, butter and cheese) to Los Angeles and San Francisco. The wharf was an improvement but was still too short to allow coastal shipping vessels to anchor.

Next up was a partnership between Cass, John Harford, William Beebe, and L. Schwartz, all of whom were involved with the wharves at Avila and Port Harford (Port San Luis). The partners, operating under the name of J. Cass and Co., spent $15,000 to enlarge the wharf, build a large warehouse, and construct offices for the steamship and telegraph companies. The construction started in 1874 with the now deep-water, 940-foot-long wharf opening in 1875, the same year the town of Cayucos was laid out and named.

The wharf quickly became a regular stop for ships of the Pacific Steamship Company and the wharf and warehouse became the center of commercial activity for the new town. The wharf was also a transportation outlet for locals (the alternative being the local stage coach) and was a vital link between Los Angeles and San Francisco. It would retain its important status until the new century when competition from new modes of transportation—trucks and cars—would end the need for a commercial wharf at Cayucos.

Nevertheless, the wharf would continue to see use into the 1930s, although much of its use by then was for commercial fishing boats. 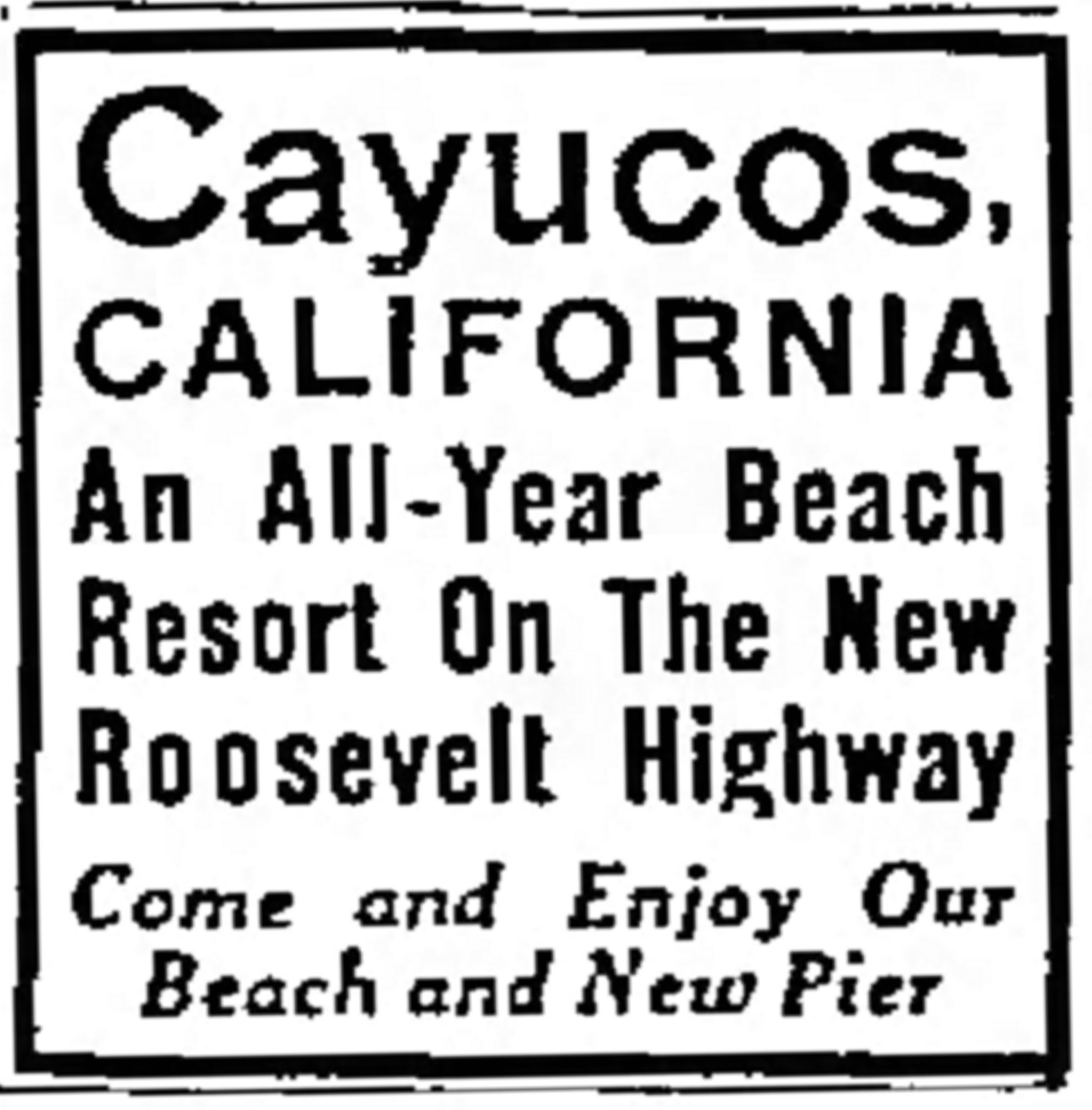 A Fish and Game bulletin in 1953 recorded: “The coast of San Luis Obispo County was famous for its abalones and a colony of Japanese dried them at Cayucos till 1915 when a state law prohibited drying. A fish cannery near the base of the pier opened in 1916 for the canning of sardines and abalones although there had been some canning of abalone here as early as 1905. The plant closed in 1920 chiefly because of the rough water at this unprotected pier. Fishing boats could unload only in fair weather and could find shelter only at Morro Bay. Now there are no facilities for handling commercial fish other than the pier as a fair-weather landing spot. The fish landings at Cayucos have averaged 12,000 pounds per year for the past 20 years. The species have been abalone, rockfish, smelt, and lingcod. Two or three small boats have had headquarters here but abalone diving has been the chief activity.” 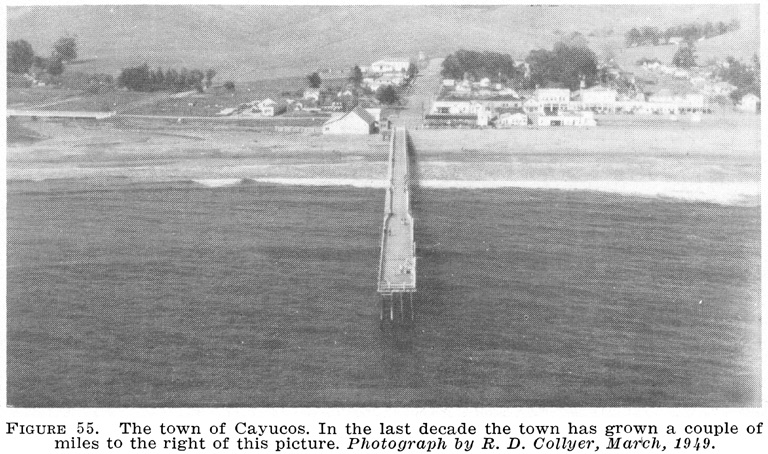 That same report indicated that there were four party boats operating from the pier in 1952 and that the pier was heavily used by anglers. 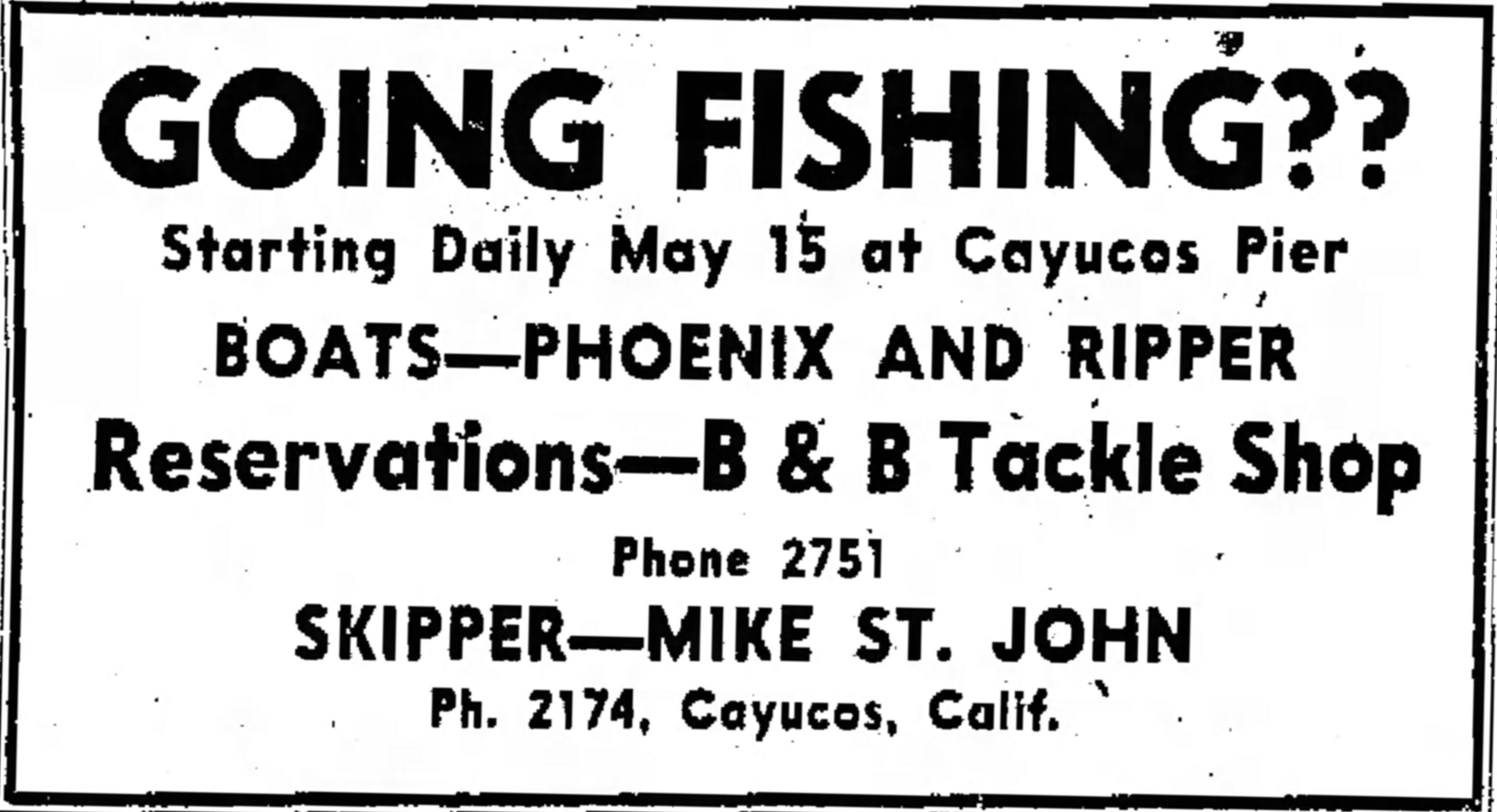 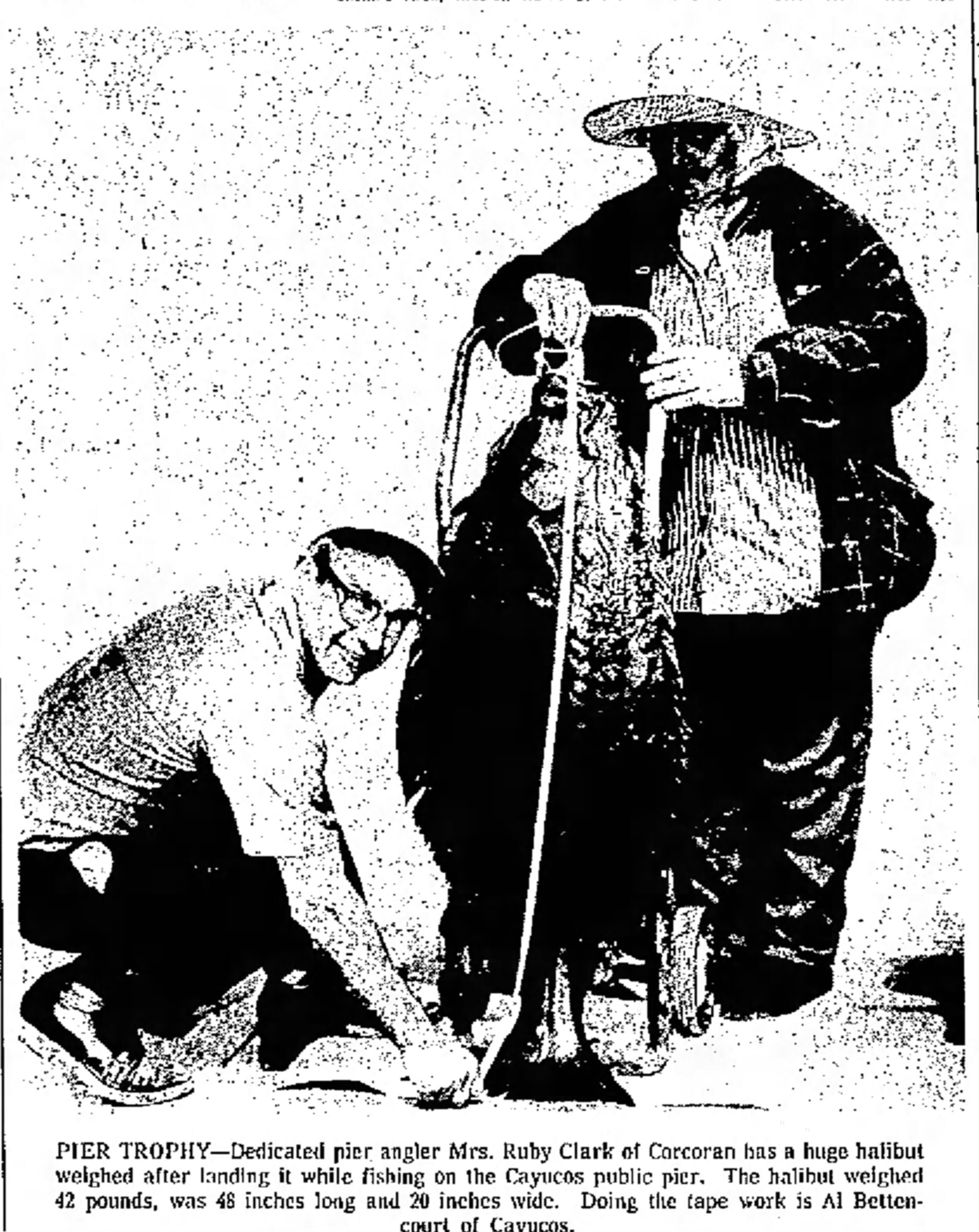 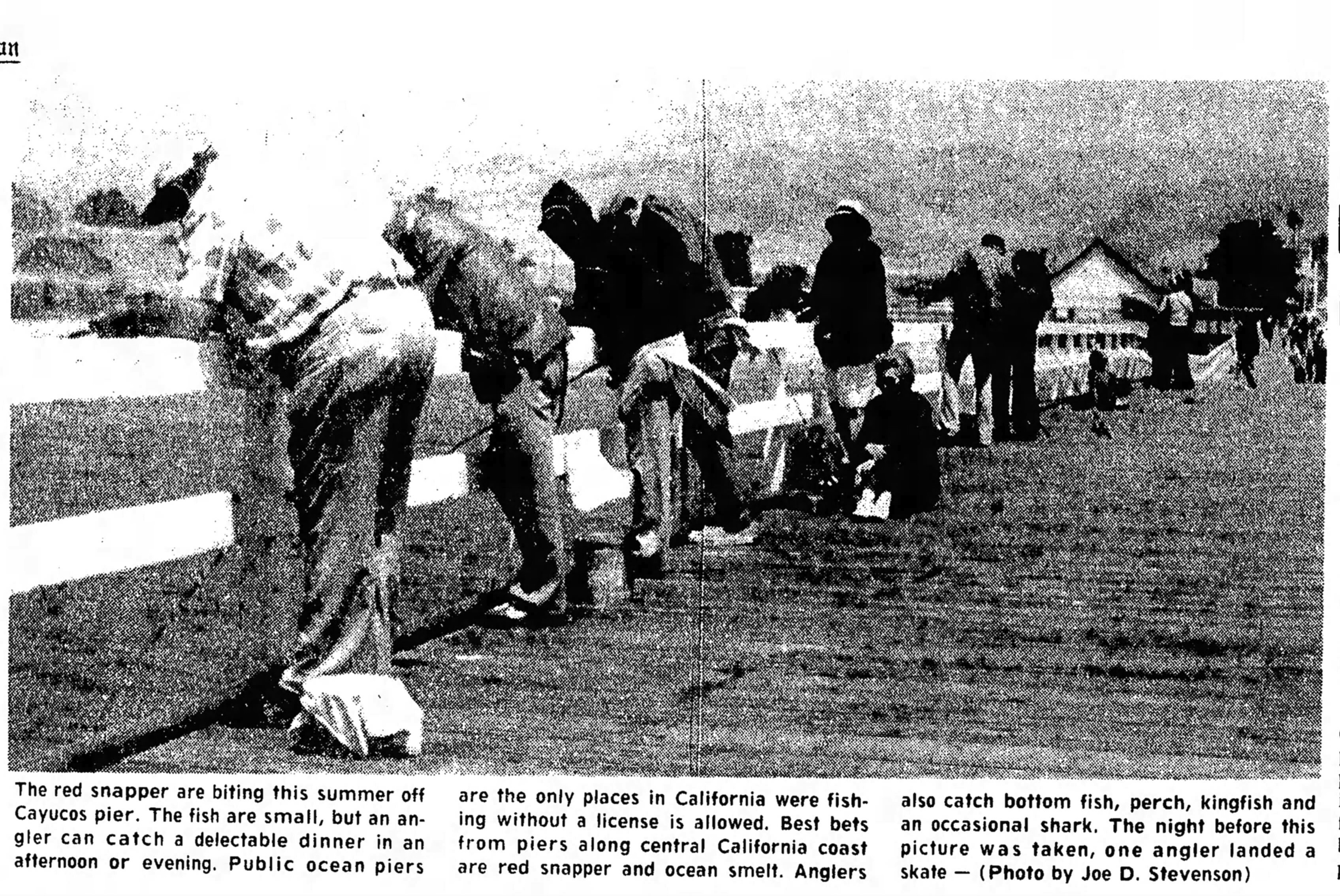 Of course damage to the wharf, like most coastal wharves and piers, is always a threat. Winter storms and their damaging waves are usually the culprit, although at least two tidal waves also tore into the wharf/pier. Damage from tsunamis (tidal waves) was recorded at Cayucos on November 22, 1878 (from a Southern California earthquake) and March 28, 1964 (from the Alaska earthquake). The El Niño storms of 1983 included Cayucos as a victim requiring an infusion of $80,000 from FEMA to fix the pier.

It was damage from a storm in the ‘30s that finally led to the original wharf’s replacement by the smaller and narrower “pleasure pier” seen today. Built on the same site, the pier is home for local and visiting anglers alike. The warehouse built by Cass has become the community center near the foot of the pier that also houses the Cayucos Art Society Gallery.

In 2013, old age finally caught up with the pier and a rebuild was necessary (as seen above).

Facilities: Benches, lights, and fish cleaning stations are found on the pier. Adequate free parking is found near the foot of the pier along with restrooms and showers. If the kids get bored, the beach also has a nice collection of playground equipment.  You can rent tackle ($3 half a day, $5 all day) and buy bait just up the street at Bill’s Sporting Goods. Near the pier is the Pier Cafe, stop in and look   at photos taken half a century ago when the town was a center for abalone.

Handicapped Facilities: Handicapped parking but non-handicapped restrooms. The pier surface is wood planking with a rail height of 39 inches. Not posted for handicapped.

How To Get There: Take Highway 1 to either Ocean Boulevard, which is the main street and will take you past the pier, or take the Cayucos Drive exit which will take you straight to the pier.