Don’t believe everything you read. On a visit to Hearst Castle I had read that the fishing at Cayucos was generally poor—and so, I avoided it for years. I would drive right by the town as I headed north to San Simeon, or south to Morro Bay. Boy, was I wrong! Surprisingly, it took a trip on a boat to teach me the fallacy of my belief. In late July of 1988 I had stopped at Morro Bay for a little twilight fishing on the party boat “Mallard.” I experienced some excellent fishing on the boat, but what intrigued me the most was the story of the deckhand who claimed that dozens of large halibut were being caught daily off of the nearby Cayucos Pier. And though he said it was the local regulars with “know how” who were catching the fish, I figured my experience, and “know how” just might yield me a fish or two. 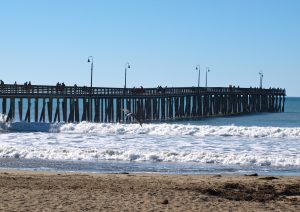 The next morning I was out on the pier! The deckhand was right, but that was only part of the story. Anglers fishing near the surf were catching large surfperch, both barred and calico, in quantities large enough to fill buckets. Halfway out on the pier, the fishermen were catching small bocaccio two to three at a time, as well as walleye and silver surfperch. At the far end, anglers were catching shinerperch (and some anchovies) and then using them as live bait for halibut. 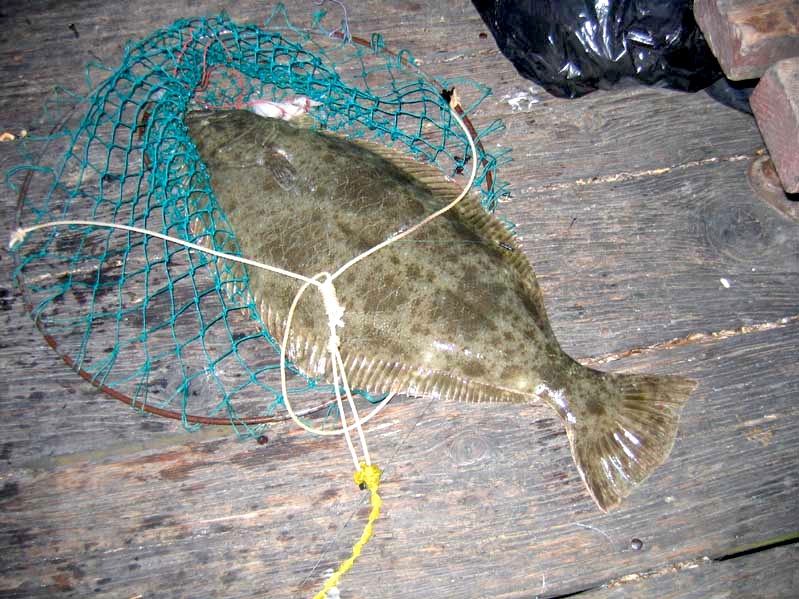 Lying on the pier were several halibut, each of near gunny sack-length. Evidently the halibut were spawning around the pier and anglers with the proper technique and gear were having the kind of action more common out on the boats. I was lucky enough to catch a few of each of these; unfortunately, I could only stay a brief time. I do not know how many more days the halibut continued to spawn in the shallow waters around the pier. I do know the deckhand had said the halibut had been biting for over a week. By the way, the deckhand managed to avoid working on the boat that next morning—he was out on the end of the pier just for the halibut. 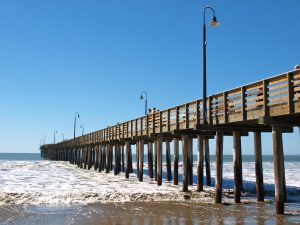 Environment. The pier is located near the north end of Estero Bay with the shoreline cutting due west to the right of the pier. To the south, a sandy beach (mostly Morro Strand State Beach) runs all the way to Morro Rock and most mornings will see a combination of beach strollers, joggers and even horses on the sand. To the north of the pier sits Cayucos Creek and soon after tide pools, rocks, and bluffs begin to be the predominate features all the way to San Simeon. 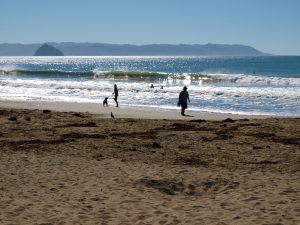 The bottom around the pier is mostly sand but there are some large rocks near by. Most years can also see a fairly good growth of kelp around the pilings, especially late spring into the fall months. A not unwelcome fact is the location itself; the juxtaposition of southward facing beach and inland canyons seems to provide a mechanism that allows the fog to burn off faster than areas to the north and south. In fact, it can sometimes be downright cold in Morro Bay while it’s shirtsleeve weather at Cayucos; sometimes but not always. The town itself is another old-fashioned California beach town, a somewhat bigger brother to Avila. 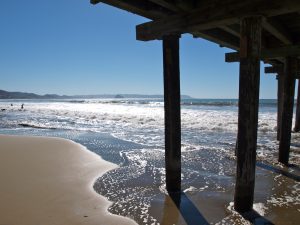 Fish. The mid-pier area generally sees the largest concentrations of the smaller perch—walleye, silver, spotfin, and, of course, shinerperch. The end spots will yield all of these, but also more pelagics such as Pacific and jack mackerel, Pacific sardine, Pacific herring (some years), bonito and barracuda, the last two only in warm-water years, and then normally in the fall. Best action for the halibut, and smaller flatfish such as sole and sanddab, seems to be at the end of the pier.

White croakers (kingfish) are generally present 365 days of the year, although 366 days during leap year. Ditto to an almost equal degree the little staghorn sculpin (bullheads) that will grab hold of a bait all out of proportion to their size. At times vast concentrations of jacksmelt will also add spice to the local mix. 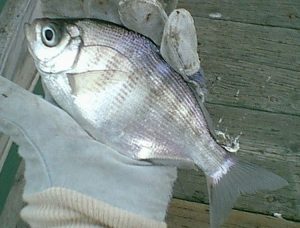 The schools of snapper (baby bocaccio) that used to be as predictable in the summertime as sunshine and heat in the valley, and usually were landed six at a time on the old “Lucky Joe” bait rigs, are now only an occasional visitor. Some years will still see the small, bronzed “big mouths” but the limit is now one (with a ten-inch minimum length).

Fishing down around the pilings, especially when there is a good growth of kelp, will sometimes yield a number of bottom species more common to rocky areas. In the springtime you might see an occasional blackperch or striped seaperch, while summer and fall will yield up a few pileperch, cabezon and lingcod, as well as a variety of rockfish—grass, kelp, brown and black-and-yellow.

The pier is a noted place for sharks, rays and skates with most caught out toward the end, usually at night. It’s a regular July-August happening when large schools of dogfish follow the even larger schools of sardines and mackerel into the pier’s waters. Cayucos also sees quite a few species of sharks that are relatively uncommon to piers—soupfins, horn sharks, angel sharks (including a reported 65-pound fish in August 2004), and even sevengill sharks (including a reported 180-pounder in November of 1998). It is also one of the very few piers where swell (puffer) sharks are a common catch. Isn’t that just swell? 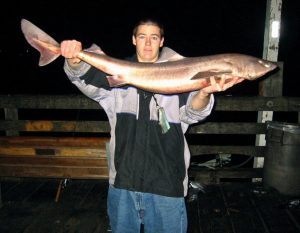 Many of the visitors to the pier are of course not fisherman but touristas who like to come out and experience a little of the life on the pier (including offering up the inevitable question—“what ya catchin’?” Luckily for them, as well as the anglers on the pier, the fish-rich waters of Estero Bay can also often offer up an interesting assortment of wildlife to view up close—otters, dolphins, sea lions, harbor seals, sea birds and whales. The pier is a good place to spot gray whales during the winter, an equally good spot to see humpback whales during the summer. Cameras are often clickin’ about as fast as the reels are reeling. 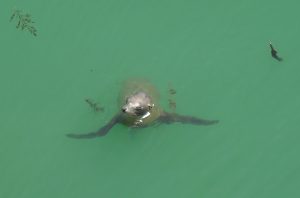 Fishing Tips. Fishing here tends to be very good or very bad. The best advice is to call ahead if in doubt. Best bait for the nearshore barred and calico surfperch is live sand crabs, fresh mussels, bloodworms, pile worms or small pieces of shrimp. I prefer a simple hi/lo rigging while many prefer a sliding leader, Carolina-rig approach. The surfperch can also be taken on grubs and the increasingly common Berkeley Gulp worms. 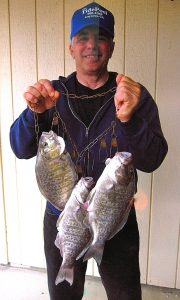 Farther out, small strips of anchovy seem to work best on the walleye surfperch, silver surfperch and spotfin surfperch, although sea worms fished near the top can yield jacksmelt, and pieces of anchovy or squid can yield white croaker and, at times, a few queenfish. The smallish Pacific butterfish also visit the pier some years. Best bait for these seems to be small pieces of mussel fished on size 6-8 hooks a few feet under the surface of the water. 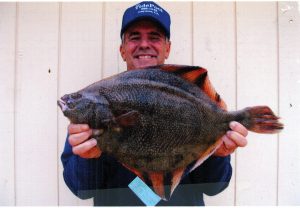 Flatfish such as flounder, sanddabs, and sole will usually strike a worm-baited hook or a small strip of anchovy fished near the bottom, especially if cast out and slowly retrieved. The larger halibut prefer live bait, which you will have to catch yourself. Although there are times you can use a bait rig or net to get some anchovies, sometimes you may need to settle for small brown bait (white croakers) which seemingly are always available. Many times you will also see good concentrations of shinerperch and small walleye surfperch. These are normally found in the depressions between the pilings out toward the end of the pier, and both are good halibut bait. (For some reason most of the walleye surfperch I’ve seen at Cayucos are on the small side.) 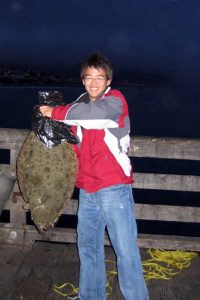 Most pilings here have a good growth of mussels and fishing under the pier, near the pilings, using mussels for bait, will occasionally yield a blackperch, striped seaperch or rubberlip seaperch. Less frequently caught are pileperch and rainbow seaperch. If schools of immature bocaccio are present (assuming their numbers increase and the limit is raised) bait rigs such as Sabikis will be the standard rigging. Fish mid-pier, drop your line to the bottom, and then start a slow retrieve. Usually you will have fish on your line by mid-depth. 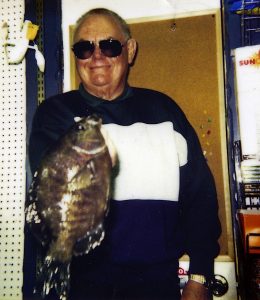 Blackperch (Photo courtesy of “The Tidepool”)

Multi-hook bait rigs will also work well when schools of sardines or Pacific herring swing by the pier and sometimes they’re deadly on jacksmelt, mackerel and jack mackerel. For the sardines and herring use size 12 or 14 hooks; for the jack mackerel use size 8-6 hooks; for the Pacific mackerel use size 6-2 hooks. Generally a long cast with an erratic retrieve will yield up the fish if present. When the fish are thick bare hooks are often all you need; when they’re a little more persnickety you can put on a small piece of squid or, for the mackerel, a small piece of mackerel.

A number of steelhead have also been reported from the pier. All were small (8-14”) and most were taken on Sabiki bait rigs (one was taken on a grub). The majority were caught near the end of the pier with the exception of one that was taken inshore down by the pilings. November was the time for all; apparently while waiting for the nearby creek to open they decided to make a visit to the pier. All were released.

Another fish that is not really common, but that is caught at times is striped bass who apparently have wandered down from more northern waters. When they’re in the vicinity some decent-size fish can show up. 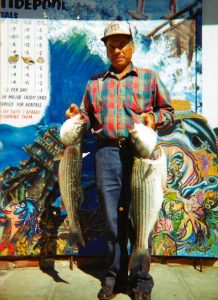 Like many piers along this stretch of coast, Cayucos sees an active shark fishery at night. Most anglers use heavy gear, and the most common bait is a freshly caught small fish (sardine, mackerel, smelt, white croaker, perch, small rockfish) that is either cut in part diagonally for bait or given several diagonal cuts in the skin to allow blood to attract the sharks. A fairly common technique is to chum with cans of generic cat food (which are cheaper than the advertised brands). Holes are punched in the cans and then the cans are lowered into the water (20 feet from the surface of the pier) using a mesh bag on the end of a rope. 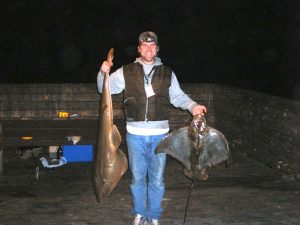 Most commonly caught “sharks” are spiny dogfish, leopard sharks (a 36-pound, 51-inch leopard was reported in February of ‘99), and brown smoothhounds, although the same baits, rigs and times will also see several cousins of sharks—bat rays, skates (usually big skates), thornback rays and shovelnose guitarfish. And, the big skates do get big as seen in the 25-square-foot, 100+-pound big skate caught in July of 2004. Twenty-five square foot? The skate measured roughly five feet long and five feet wide so in my book that’s twenty-five square feet.

One night, in April of 1991, I witnessed a large 100+pound bat ray being landed on the pier. Unfortunately, it was a Pyrrhic victory of sorts due to the careless manner in which the big ray was handled. Bounced on the pier, tail cut off, deeply imbedded hook cut from the mouth, all actions seemed destined to insure the demise of the creature. This was true even though the victor of the fight “released the fish to fight another day.” That statement was somewhat of a misnomer. What it meant was that the angler and his buddies managed to hoist the large creature up to the railing (after dropping it twice), pushed it over the side, and then watched it slam into the piling before slowly drifting away. Although bat rays are really tough, in this case an obsequy (funeral rite) would have been appropriate.