Thresher taken at the Goleta Pier by Big Red

A baby thresher taken at the Pacifica Pier

Range: Circumglobal in warm waters. Found in the eastern Pacific south to Chile and north to Goose Bay, British Columbia, and southeastern Alaska. Common locally from Punta Eugenia, Baja California, to southern California. The majority of threshers caught in California are taken south of Point Conception.

Habitat: Most common in deeper offshore water but young threshers venture into shallower water. Found from the surface down to about 2,300 feet deep. A species increasingly targeted by southern and central California pier rats.

Shoreline:Rarely caught from shore unless near deep-water areas.

Boats: A major species for both boaters and kayakers in southern and central California. Live bait is preferred but they aren’t easy to land from a kayak. 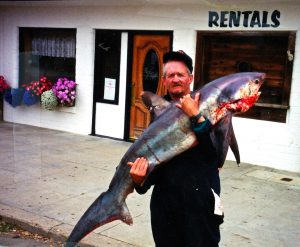 A nice thresher taken at the Caucus Pier

Bait and Tackle: Bony fish make up 97% of the thresher’s diet. Mostly these are small, schooling species such as mackerel, jack mackerel and sardines. As a result, the recommended bait is a live whole fish with mackerel and sardines leading the list. A whole squid also makes excellent bait. Anglers specifically fishing for them land the great majority of threshers. Tackle should be heavy and include a net or treble-hook gaff to bring the fish onto the pier. Line should be at least 40-pound test, a wire leader is preferred and hooks can be 4/0 or larger.

Food Value: An excellent, mild-flavored fish with firm texture, large flakes, and white coloring after cooking. It has moderate fat content. Threshers can be prepared many ways but one of the best is to simply cut the meat into steaks and broil them on a grill. The meat does need to be cleaned properly and kept cool before cooking.

Comments: The high demand for thresher steaks, accompanying high prices, over-fishing, and low number of pups birthed each year by females (two to four), have led to a dramatic drop in the thresher population in the last twenty years. Many people feel there should be either a ban or severe limits imposed on the take of threshers. 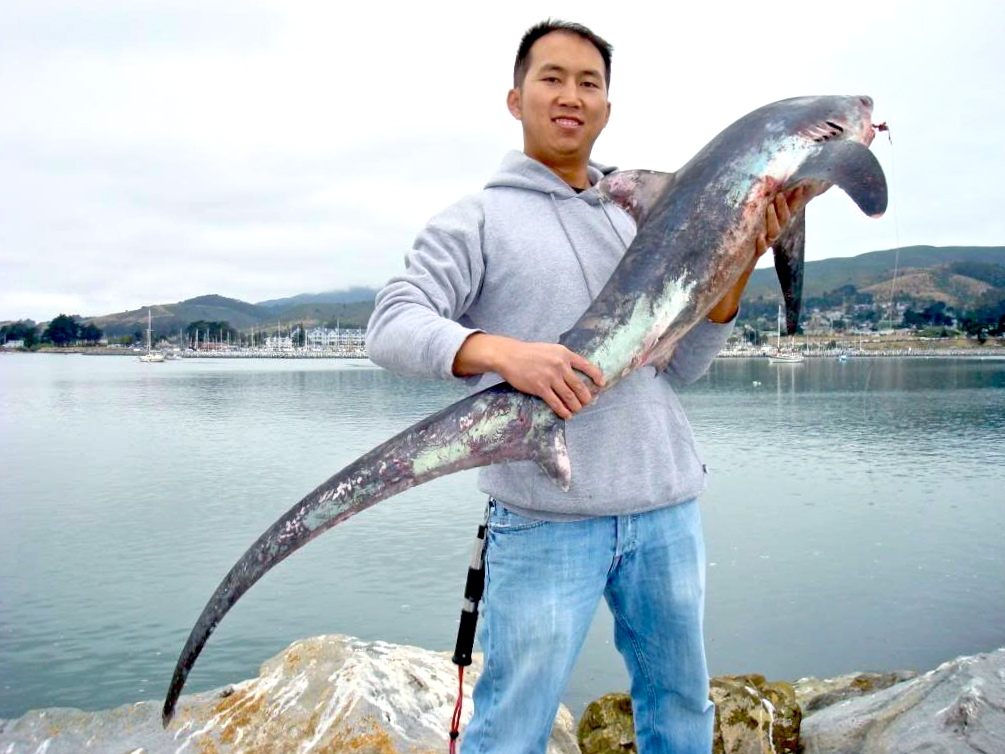 A thresher taken from the jetty at Half Moon Bay