Species: Anisotremus davidsonii (Steindachner, 1876); from the Greek word anisotremus (unequal aperture, in reference to the pores on the chin), and davidsonii (for George Davidson, a 19th Century astronomer at the California Academy of Sciences).

Habitat: Primarily found inshore and in bays around rocky areas. Depth from the surf zone down to a recorded 201 feet.

Boats: An inshore species rarely taken by boaters unless they are fishing in bays—San Diego Bay, Mission Bay, and San Pedro Bay. 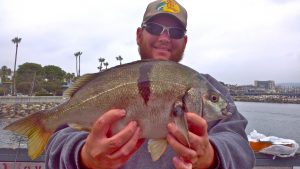 Bait and Tackle: Sargo are bottom feeders that prefer ghost shrimp, fresh mussels, and worms, but they can be caught on almost any bait. Use size 8 to 4 hooks and fish on the bottom or a couple of feet above the bottom. The most commonly used rigging is a high/low leader.

Food Value: Good mild flavored meat with a firm texture. Can be cooked in almost any manner but perhaps best fried, baked or broiled.

Comments: A good sport fish, very similar to the larger croakers. The first sargo you catch may surprise you when you hold it and feel it grunt—not surprising since it belongs to the grunt family.