Species: Porichthys myriaster (Hubbs & Schultz, 1939); from the Greek words porus (a passage), ichthys (fish), myri (many), and aster (stars—in reference to the dots on the head and body).

Identification: These fish have rows of shiny, pearly dots (photophores) on the head and body that resemble brass buttons, thus the name midshipman. Apparently these photophores are luminescent organs that can be turned on or off at will although no one has been able to interview a midshipman as to their choice of time for performing their little “light” show. They have a broad head with a large mouth and eyes protuberant on top of head. The first dorsal fin is tiny with 2 spines; the second dorsal fin is long and soft rayed. The pelvic fin is under head and they have no scales. Their coloring is purplish gray to brown above and yellowish below. The pectoral fins are heavily spotted.

Size: To 20 inches, but most caught off piers are less than 14 inches.

Habitat: Rocky and soft bottom areas, especially in bays. Intertidal zone to deep water. Recorded to a depth of 414 feet. 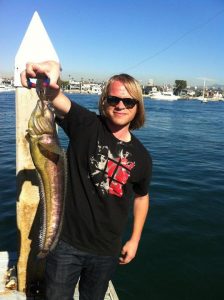 Boats: An uncommon species for boat anglers although a few are taken each year by anglers fishing in bays.

Bait and Tackle: Almost any bait and tackle fished on the bottom may tempt these fish. Most I’ve seen caught hit on anchovies but better baits would probably be ghost shrimp, clams, bloodworms and innkeeper worms.

Food Value: Edible, but not considered particularly delicious. However, it is reported that Captains in the Navy seem to enjoy chewing up midshipmen.

Comments: This is a very strange and ugly fish that is discarded by most fishermen as soon as it is caught. A second species of toadfish, the plainfin midshipman, porichthys notatus (Girard, 1854), is common in more northern waters. It is caught in shallow water north or Point Conception but almost always in deeper water south of the point. It ranges from southern Baja, California to British Columbia. Small plainfin midshipman are considered one of the best baits for sharks in San Francisco Bay; they will not be bothered by smaller sharks and rays but are considered a delicacy by the larger leopard sharks and soupfin sharks. 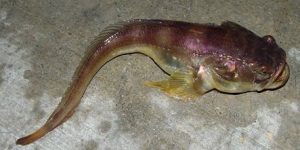 An interesting trait of both species of midshipman is the humming or grunting sound the fish make, a sound produced by vibrations in the swim bladder. A few years ago people in the Sausalito area were alarmed by sounds that seemed to be coming from the inshore waters of San Francisco Bay. Aliens? New Age Warnings? A case for Maulder and the X Files? No, simply sex-crazed little midshipman happily humming away as they spawned in the shallow waters.

A second interesting characteristic is the extreme measures the male goes through in protecting its eggs. Apparently, the male eats little if anything during the time it is protecting the eggs, becomes more and more emaciated, and evidently, at times, even dies from lack of food. Specimens have also been observed in which the fins and flesh have apparently been attacked by crabs while the fish concentrated on protecting the eggs. In another instance, a dead midshipman was observed with larvae; the larvae were fully developed and in the process of freeing themselves from their yolk sac. Mortality is apparently quite pervasive among these egg-tending males. So, no empty nest syndrome here.