Salmon were hanging around under the end of B Street Pier in Crescent City this afternoon. They wouldn’t take my bait; all I had was shrimp and Fishbites. No other fishermen were on the pier at the time.

Date: September 8, 2013; To: PFIC Message Board; From: Bigindaboat ; Subject: Salmon at B Street

Wow, better outfit yourself with some pink Mad River steelhead worms and go get yourself some orange meat!

Date: September 8, 2013; To: PFIC Message Board; From: anchovy aaron; Subject: Salmon at B Street

Chartreuse spinners or spoon. When all else fails salmon will still eat chartreuse.

I fished the “B” St. Pier in Crescent City Saturday morning for a couple of hours and was getting nothing on the bottom except bullheads and crabs when I spotted some anchovies. I caught a few with a Sabiki, put one on for live bait, and got a surprise, a 23-inch silver (Coho) salmon. I didn’t expect that. I was going to fish the pier Friday night but the winds were ferocious, 30-40 miles per hour with gusts topping fifty. I walked out on the jetty to take a few pictures of the pier, lost my hat to the wind, could hardly stand up, and decided it would be futile to go fishing in that wind. The next morning it was still windy, which made it difficult to fish, but I decided I had to at least try it for a couple of hours. It proved to be a wise decision given the salmon. Of course being a silver salmon it was illegal and had to go back into the water. 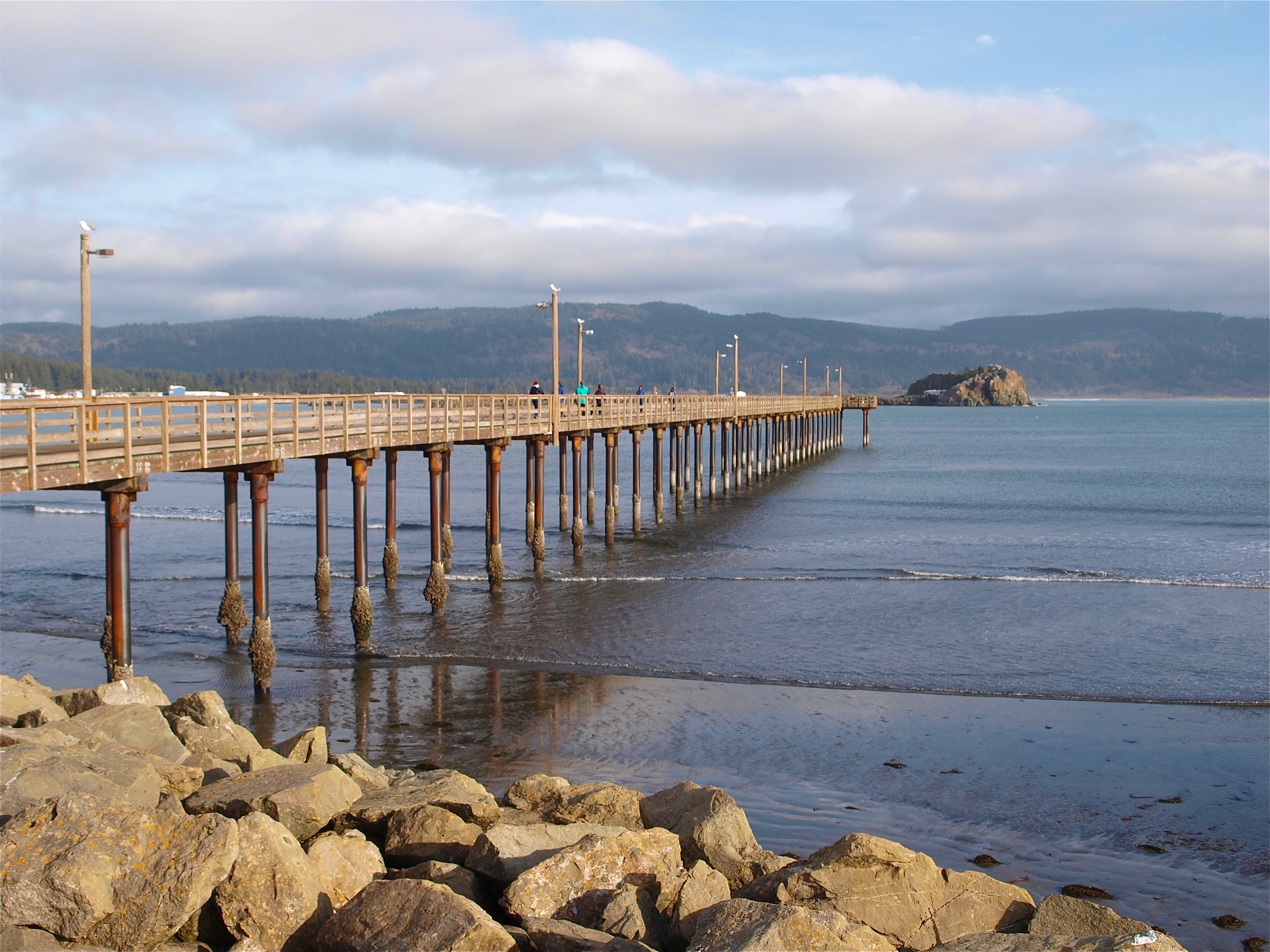 September 1997—William Van Dyke, of Popeye’s Bait & Tackle at the foot of the pier, says there has been a good run of mackerel, Pacific herring and jacksmelt at the pier. Anglers are using bait rigs or very small hooks and beads to attract and hook the fish. Some of the mackerel are up to 3-feet in length which leads me to suspect they are jack mackerel (Spanish mackerel), although this El Nino year may see Pacific mackerel up in that area. Fishing for both halibut and perch has slowed.

December 1997—Linda, at Popeye’s Bait & Tackle, says it has been windy, cold and rainy and few if any fish have been landed recently. However, in the first three hours of the new Dungeness crab season, eight people on the pier landed their limits, so it looks like another banner year for Dungeness crabs.

January 2000—Chris, at Englund Marine, says that he is getting reports of quite a few halibut being landed at the pier. Six fish, 15-20 inches long, were landed one day and another two fish broke the lines of the anglers. He says it is a possibility they are sand sole but all reports so far indicate they are California halibut even though it’s a strange time of the year for them. Most action though is being done by the crabbers who are out in force. The weather has been pretty good for this time of the year.

March 2001—Dave, at Englund Marine, says that anglers are beginning to pick up quite a few pogies/pumpkinseeds at the “B” Street Pier and at Citizens Dock. Unfortunately, I’m not too clear as to if they are pileperch, striped seaperch or redtail surfperch, but at least some type of perch are cooperating with the local anglers. He says anglers are also snagging some herring when the schools make their runs into the bay and that people are getting a few Dungeness crabs (although overall it has been a slow crab season).

August 2001—Leonard, at Eugland Marine, says salmon action has been fantastic off the shoreline and that a few are also being landed from the piers and wharfs. He says there is bait everywhere—jacksmelt and Spanish mackerel. He says the salmon are being taken on 1/2 to 1 oz. Kastmasters, Little Cleos and Krocodiles.

September 2001—Leonard, at Eugland Marine, says visitors hitting the pier are getting a few fish—smelt, herring and flatfish. He says there’s been a massive die off of fish in the harbor and the smell is somewhat overpowering.

February 2002—Chris at Englund Marine, at the foot of Citizen’s Dock says a couple of California halibut were landed recently along with some small sand sole. Crabbing has been poor. However, the runs of Pacific herring should start anytime.

September 2002—Chris, at Eugland Marine, says anglers are mainly getting some nice sand sole (which they mistake for halibut) and a few perch. Quite a few octopus are also being taken.

October 2004—The pier is seeing occasional flurries of jacksmelt along with the regular perch (walleyes, silvers and a few redtails). Some sand sole are also available. Most of the action continues to come from crabbers.

August 2006—Leonard, at Eungland Marine, reports that more people are crabbing than are fishing although a couple of good-sized leopard sharks were taken from the pier. 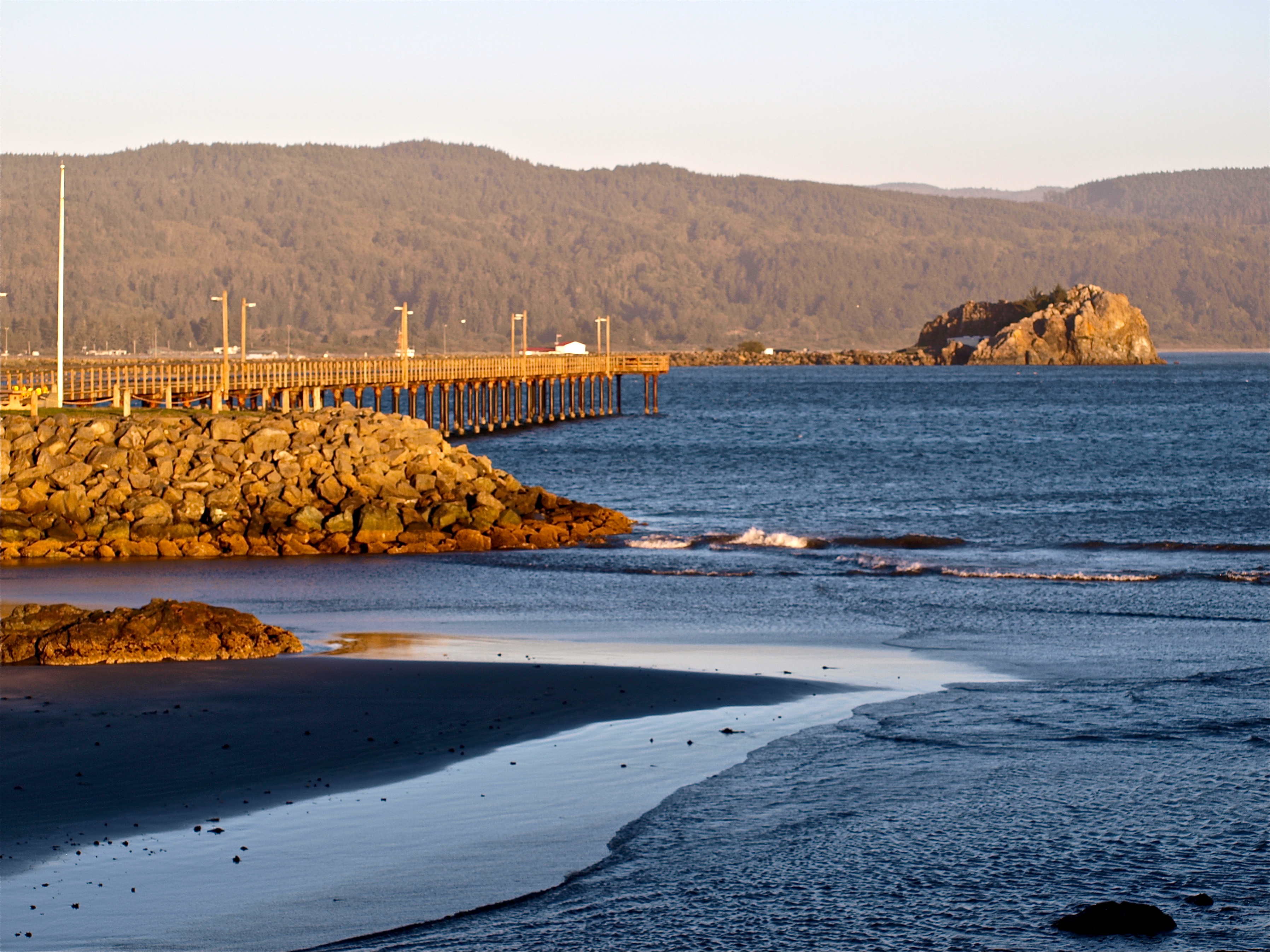 <*}}}}}}}}}>< — For years there was a small bait and tackle shop (actually a trailer) near the front of the pier. And, for a period of time, I received fishing reports from the shop (see below). For whatever reason the shop is now gone but it sure would be nice if a shop were out there. Not only would it provide bait for anglers (which can be hard to find along the north coast) but if done correctly could provide some snacks and drinks for the tourists who seem to love to walk to the end of the pier.

<*}}}}}}}}}>< — The Battery Point Lighthouse sits just inshore from the pier and it and its museum are well worth a visit. However,  you will need to do it at low tide. The lighthouse sits on a tiny islet connected to Battery Point by an isthmus and is surrounded (at times) by water. It was commissioned in 1852, lit in 1856, and is one of the oldest lighthouses on the West Coast. It was finally automated in 1953 and then, although it survived  the 1964 tsunami that devastated Crescent City, its light was replaced in 1965 by the flashing light that sits at the end of the nearby breakwater/jetty.

Scenes of the lighthouse — 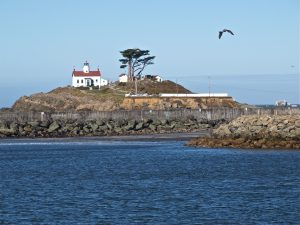 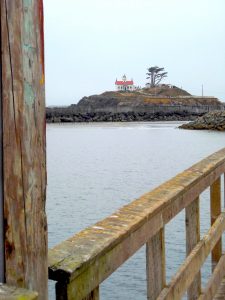 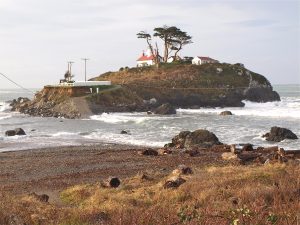 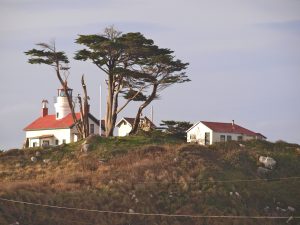 Do remember to leave the lighthouse before the high tide returns. 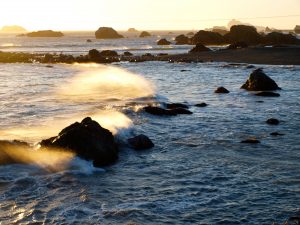 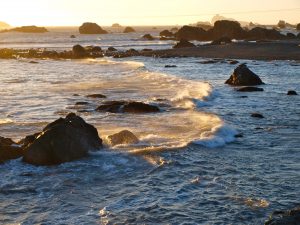 <*}}}}}}}}}>< — The Crescent City Breakwater and  Jetty sit just to the west of the pier and give protection to it and the harbor itself. It’s well worth a walk out toward the end to see the famous tetrapods that were installed following the 1964 tsumani but be careful since rogue waves that can sweep over the jetty are a common occurance. 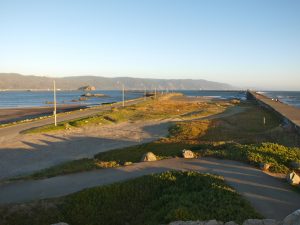 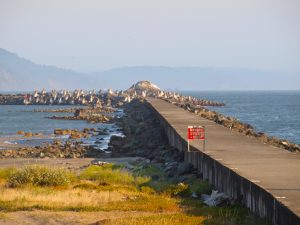 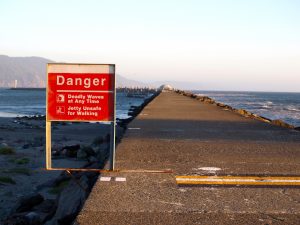 <*}}}}}}}}}>< — You never know what you are going to see on a pier. One morning saw me joined by a lady out walking her cockatoo. It almost made me want to buy a cockatoo. 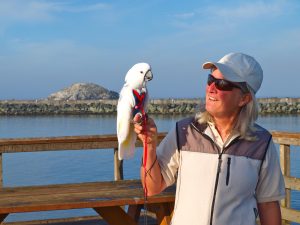 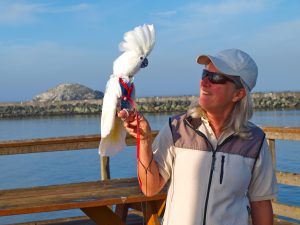 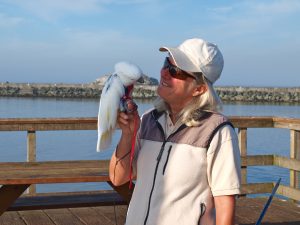 New Pier Built off B Street

Now, with all the legal wrangling over, it was time to act on the new B Street fishing pier.

A spokesman for the Corps of Engineers commented that someone in Crescent City “stretched it a bit far” by torching the old Dutton wharf before the needed permits were issued. The city now needed to write a plan for the burn, including plans for debris removal and pile control to keep the harbor open to boats and ships.

The city then had to wait for authorization from the Corps of Engineers to remove the remaining wharf surface and the pilings.

The Corps permit was received in September and arrangements were made for the California National Guard from Eureka and Crescent City to perform the demolition of the old Dutton Wharf.

In August, 1988 the City Council unanimously agreed to name the new $1.5 million pier to be built to replace the old Dutton wharf the Michael J. Scavuzzo Public Fishing Pier. It was named after Scavuzzo because of his commitment and perseverance to the redevelopment of Crescent City, especially the waterfront planning.

On Saturday September 17, 1988 members of the 579th Engineer Battalion began demolition work. Over the weekend about 200 feet of the old pier were pulled and blasted off its foundation. In all there were 25 to 30 guard members, four divers, and two blasters who participated in the works. 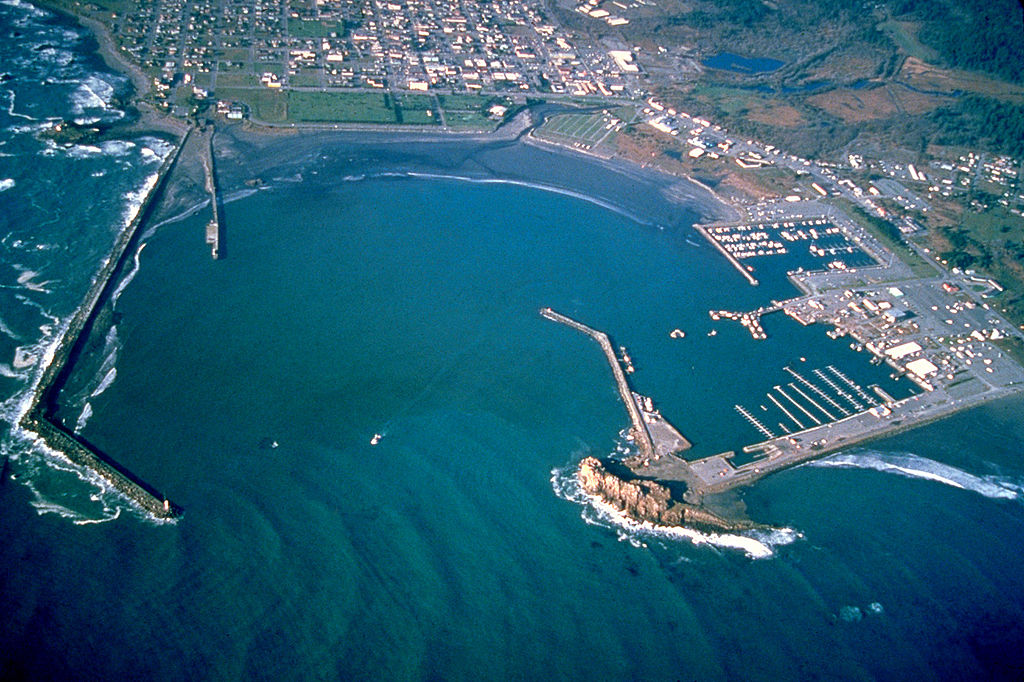 The work went slowly because they had to avoid disturbing the fish in the harbor. Each pier had individual charges set by National Guard divers underwater. Blasting caps had to be detonated just before each blast to scare the fish away from the charge area. The operation used 700 pounds of explosives and about 6,000 feet of cable for the charges, which were detonated from shore.

A guard bulldozer pulled about 50 feet of the pier from its mooring on the land side. All of the pilings on the sea side had to be blasted. National Guard and Del Norte County Sheriff’s crews pulled the pilings to shore after they were blasted free. The pilings were attached to a winch and dragged ashore by a front-end loader, which piled them up for burning.

Because the National Guard met only one weekend a month it took three months to complete the work.

Plans for the new B Street Pier were completed and funding was raised for the construction. There was a $500,000 grant from the Wildlife Conservation Board, a state grant for $500,000 from an offshore oil fund, and a loan to the city for $400,000.

The contract for the construction of the new pier was awarded to Art Tonkin who was out of Willow Creek, Calif. The new pier was built in the same location as the old one, but at a slightly different angle into the harbor. This was perpendicular to the sand shoal pattern and reached deeper water sooner. The causeway was also widened and paved.

Construction couldn’t begin until May of 1989 because of delays in shipping the steel pilings. The pilings were epoxy coated and had to be shipped from Japan. The new pier was 720 feet long and 12 feet wide.

Ribbon cutting ceremonies for the new B Street Fishing Pier were held on October 14, 1989. Mayor Robert Seligman and Miss Del Norte, Severin De Gross did the actual ribbon cutting. Nearly 100 people turned out for the ceremony. Two weeks later the pier was officially opened to the public. 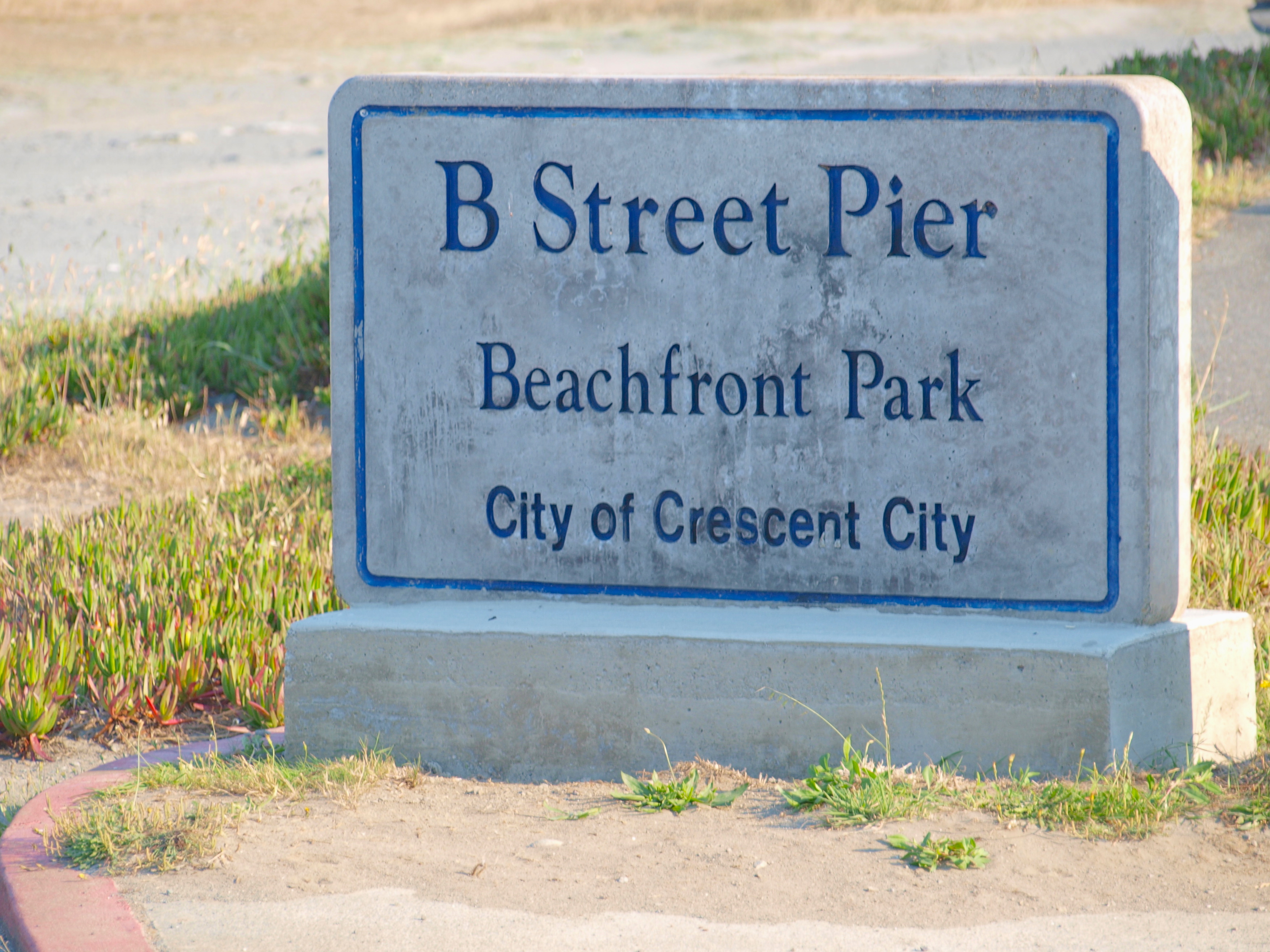 Facilities: Limited free parking at the foot of the pier, night-lights, and a few trashcans. There used to be a fish cleaning station out at the end of the pier but it’s gone—“vandals took the handles”—but there are a few picnic tables out at the end. The small bait and tackle shop that used to sit near the entrance has also disappeared. Thankfully, a couple of portable toilets are still present.

Handicapped Facilities: None with the exception of ramps leading up to the curb. The pier’s surface is wood planks and the pier’s railing is approximately 40 inches high.