Identification: Typical slender blenny-shape, but with a large head and a very large mouth. Their long dorsal fin extends from the rear of the head almost to the rounded caudal fin (tail). Their coloring is usually brown with black specks tinged with red. Unlike the sarcastic fringehead that has two eyespots, onespots only have (surprise, surprise!) one spot (ocellus) that is located between the 1st and 2nd spines in the dorsal fin. Their name comes from the fringe-like appendages called cirri over their eyes. 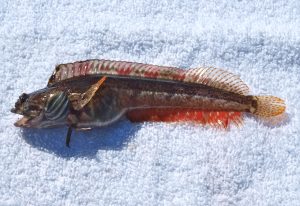 Habitat: Onespot fringehead (which one source said looked a lot like google-eyed actor Marty Feldman) inhabit fairly barren bottoms of bays and shallow coastline waters (sand or mud, 10-90 feet in depth) where they take up residence in whatever homeless shelter they can find—empty shells, bottles, cans, tires, pipe, shoes, etc. Recorded to a depth of 180 feet. CA F&G Fish Bulletin 160 reported that no “homeless” fringehead were found in the vicinity of piers in San Diego Bay. Oftentimes the fringehead sit at rest with just the heads protruding from their home. Like sarcastic fringehead, they are very territorial often charging at intruders. Primarily feeds on benthic crustaceans like small shrimp and crabs. 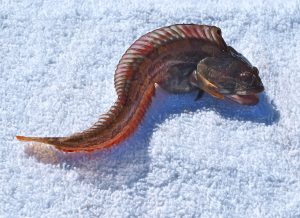 Bait and Tackle: Taken incidentally when using small hooks and fishing on the bottom.

Food Value: Too small to be table fare.

Comments: 2013 saw a plethora of onespots showing up along the coast, especially between Santa Barbara and Morrow Bay. One mini-trip in July saw me visit four piers in three days and catch eight onespot fringehead—two at Stearns Wharf (Santa Barbara), one at Goleta Pier, two at Gaviota Pier and three at Port San Luis. A few weeks later saw me catch one at the Avila Pier, two at the Morro Bay North T-Pier and one at the Morro Bay South T-Pier.

Unfortunately they can be a pain to remove from the hook. Typically as soon as you get your finger near their mouth they will latch on to it and hold on in a death grip. The tiny teeth really don’t hurt but it’s hard to get them to open their mouth enough to allow removal of the hook. They just don’t seem to understand that you’re trying to help them out. For some reason there is/was an “Alternative/ Emo/Punk” band from Baltimore called the Onespot Fringehead (even though there are no onespot fringehead fish in Baltimore unless they are in the National Aquarium). Apparently their records were distributed by Vermin Scum Records; isn’t that neat? 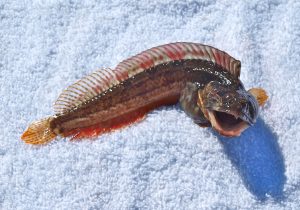 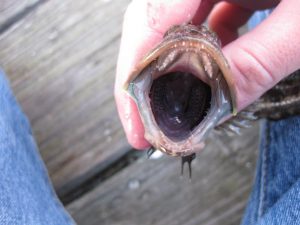