Species: Stereolepis giga (Ayres, 1859); from the Greek words sterolepsis (firm scales) and gigas (giant). Although called a bass, bass-like might be more appropriate since they are considered members of the family Polyprionidae—Wreckfishes.

Alternate Names: Commonly called black sea bass in our fair state although I like the more impressive names given by the French—bar gigantesque and barréan géant. At one time called Jewfish, California Jewfish, ocean hippo and freight train. Called mero pescada or pescara in Mexico. 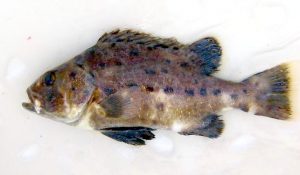 Identification: Like many fish, the looks change with age, an all too common trait also common to “Pier Rats.” Adult fish are bass-shaped, heavy and robust. Colors are dark gray or dark brown with black spots on sides (that fade after removal from water), paler below. More spines than soft rays in dorsal fin; caudal fin slightly indented in adults. Teenage fish are brownish to dusky. Juvenile fish (to about 6 inches) are perch-shaped, bright red with black spots, and with very large pectoral fins.

A good description of the differences between juvenile and adult is given in California Fish and Game, Volume 6, Number 1, January, 1920. “One of the most picturesque fishes of Southern California, well known and appreciated by sportsmen and commercial fishermen alike, is the giant black sea-bass or California jewfish, Stereolepsis gigas Ayres. It is a common sight to see one of these huge fishes hung up by the jaw before fish markets and on pleasure piers, surrounded by wondering tourists. But although over a million pounds are landed yearly in the markets, the fish caught all range in size from about three to six feet in length. The commercial fishermen never admit having seen a jewfish less than one and a half or two feet in length, and all declare them to be dull black in color and withoiyt markings, as are the larger ones. Imagine our surprise then, when we discovered that certain pretty little bass-like fishes from the hails of the boat “Albacore” were the young of the jewfish! These resembled the huge, ugly adults neither in form, color, nor markings… the younger specimens are a rich brick-red in color and market with conspicuous dark brown or black spots irregularly scattered over back and sides. There are also white or pale yellow splashes here and there on the body, especially on the throat and ventral side of the tail. The vertical fins are black with conspicuous transparent edges, the ventrals black, and the pectorals pale or transparent. As the fish grows older the body color darkens and the spots become indistinct until the whole color is a uniform dark brown or dull black, except for the light patches on the throat and ventral surface of the tail, which often persist even in the larger adults. All the fins become black except the ventrals, which, though black in the young, are lighter than the pectorals in the adult, showing white membrane between the black fin rays.” 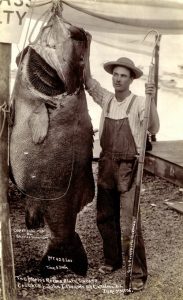 Range: Oaxaca, southern Mexico, Gulf of California, Pacific coast of Baja, California (including Guadalupe Island), to Humboldt Bay, northern California. Uncommon north of Point Conception although they once were fairly common in Monterey Bay. One record from Humboldt Bay. 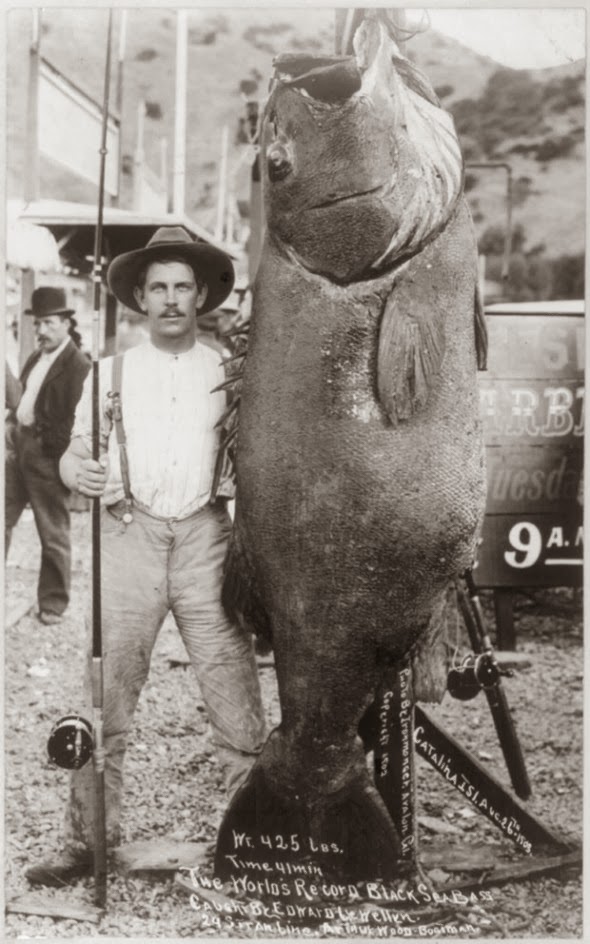 Habitat: Primarily bottom dwellers found in rocky areas, outside kelp beds, and along drop off areas. The young are common near shore. Depth varies from fairly shallow to 100 feet with the larger fish typically in deeper water. Recorded to a depth of 180 feet. Their diet includes a myriad of fish species (especially small rays and skates) as well as crabs, lobster, mantis shrimp, squid, and octopus—basically almost anything that swims or scoots around the bottom where they’re hanging out.

Piers: There was a time in California when giant sea bass were a fish that was pursued by those filled with hope—and equipped with heavy tackle. Most oceanfront piers in SoCal reported at least a few really giant sea bass (called black sea bass then) that exceeded several hundred pounds in size. 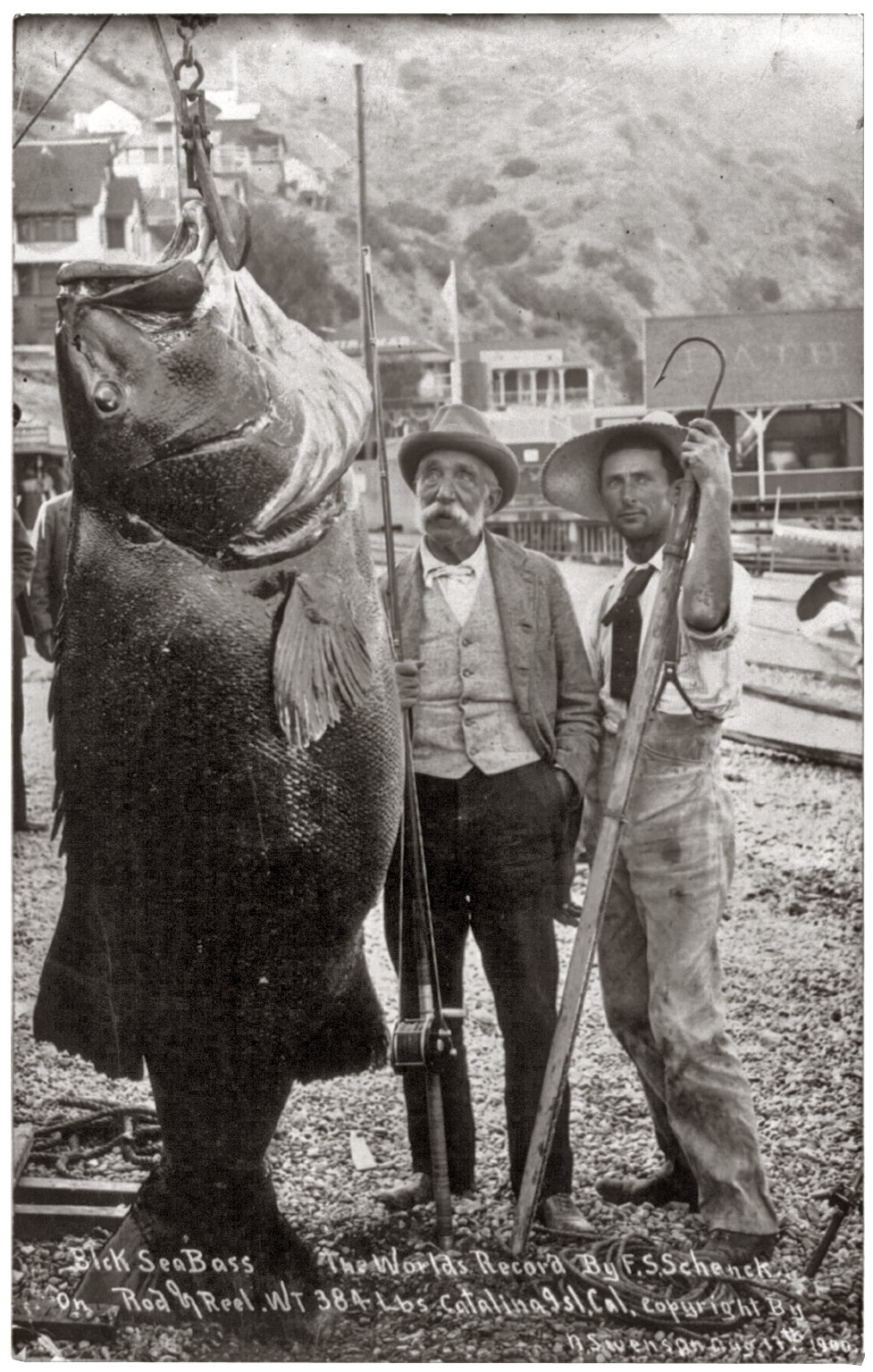 Bait and Tackle: Illegal to take.

Food Value: None since they’re illegal. 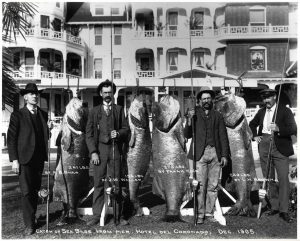 Comments: Though once fished to almost extinction, a fact that required a prohibition on take, they appear to be making a good comeback. Each year seems to see more and more of the large fish hooked—and returned—from piers. 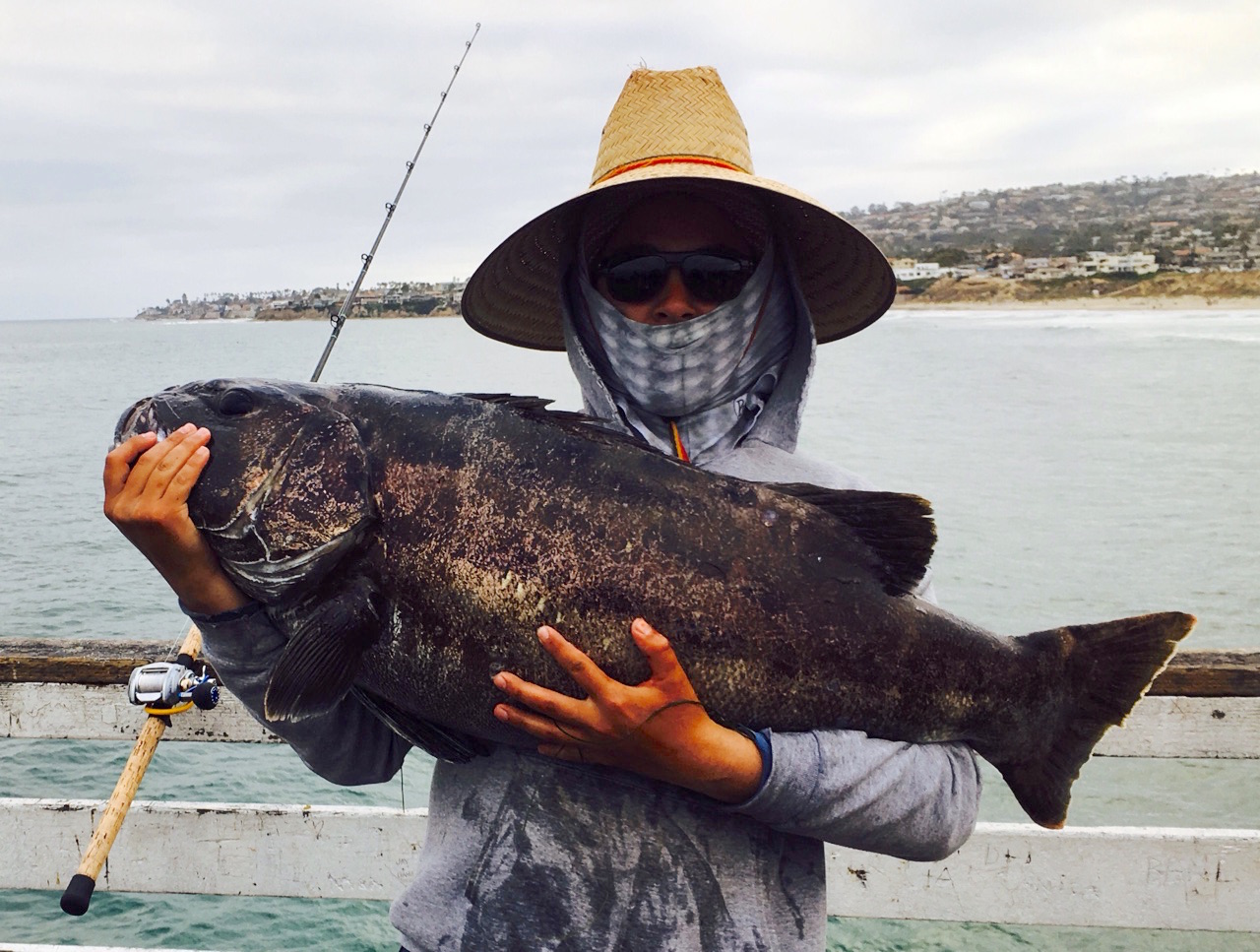 A giant sea bass at Crystal Pier in 2017. This is the wrong approach. Net them, bring them to the pier, remove the hook, and put them back in the water with a net. Do not hold them up like this.

The largest number appear to have been seen at the Oceanside and San Clemente piers but almost every SoCal pier sees a few fish each year (albeit most of these are young fish in the 30-60 pound range). We’ve seen several of these large giants slowly swim by, practically under our feet, while fishing from the Green Pleasure Pier in Catalina. The water is only about fifteen feet or so deep, crystal clear, and the sight never fails to amaze. 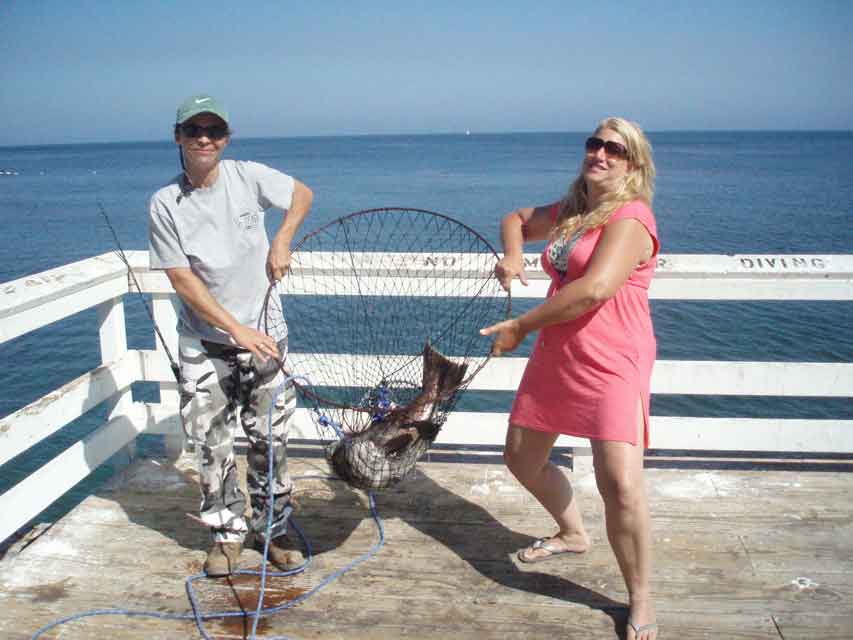 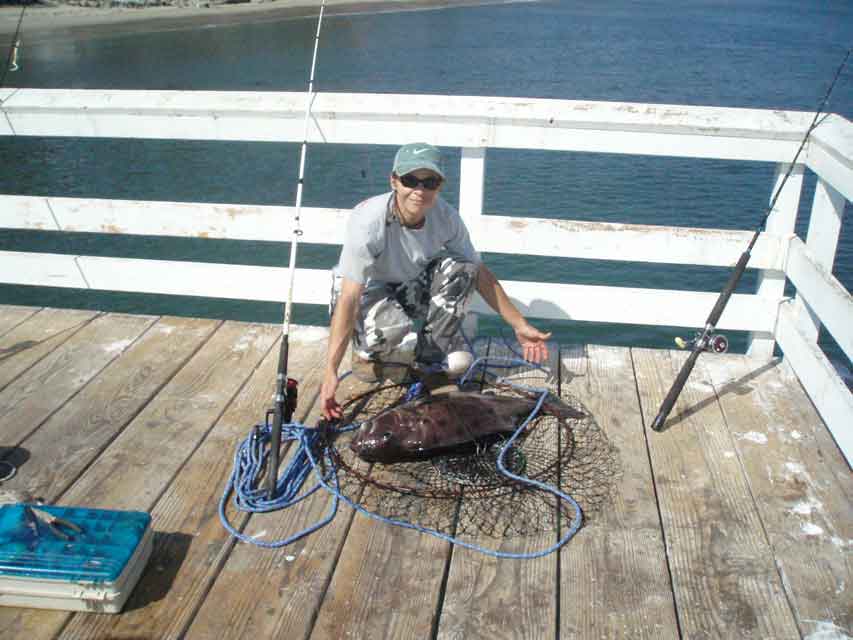 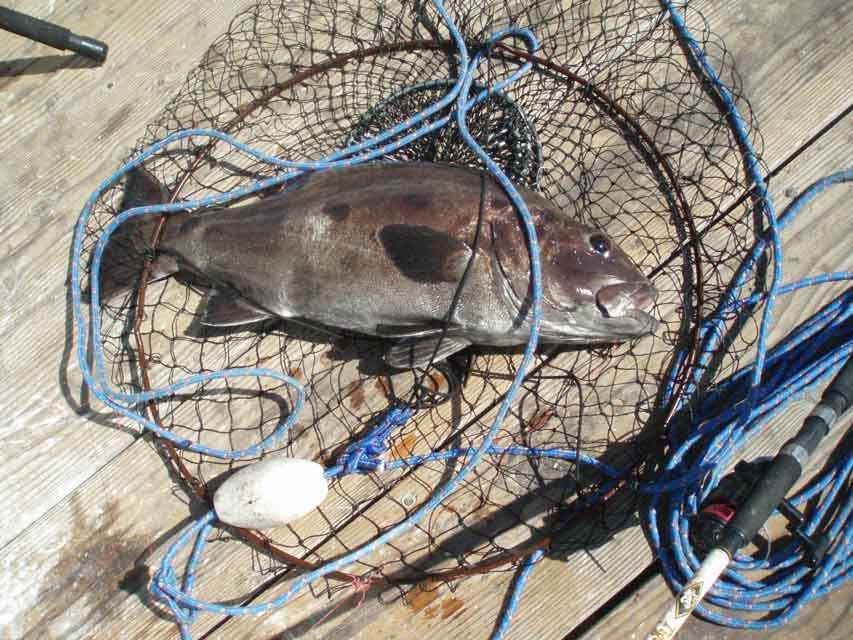 A young giant sea bass caught and returned to the water at the Paradise Cove Pier in Malibu in 2008. Technically the bass should not have been removed from the water. But how do you remove the hook and terminal tackle of a hooked fish? At Oceanside the regulars will climb down from the pier and remove the hook but it’s very dangerous.

Although increasing in numbers, some studies still show the comeback to be taking longer than expected due in large part to toxins (especially DDE and PCB) that have been found in examined fish. The big fish spend much of their time near the bottom and many of the bottom lurkin’ species they eat contain toxins themselves. These toxins can affect everything from development of the larvae to normal reproductive behavior including (possibly) changing males into females (just say no Gabby/Gabrielle). It’s a tangled web we’ve spun in our local waters. Due to over fishing, they are currently illegal to keep in California. 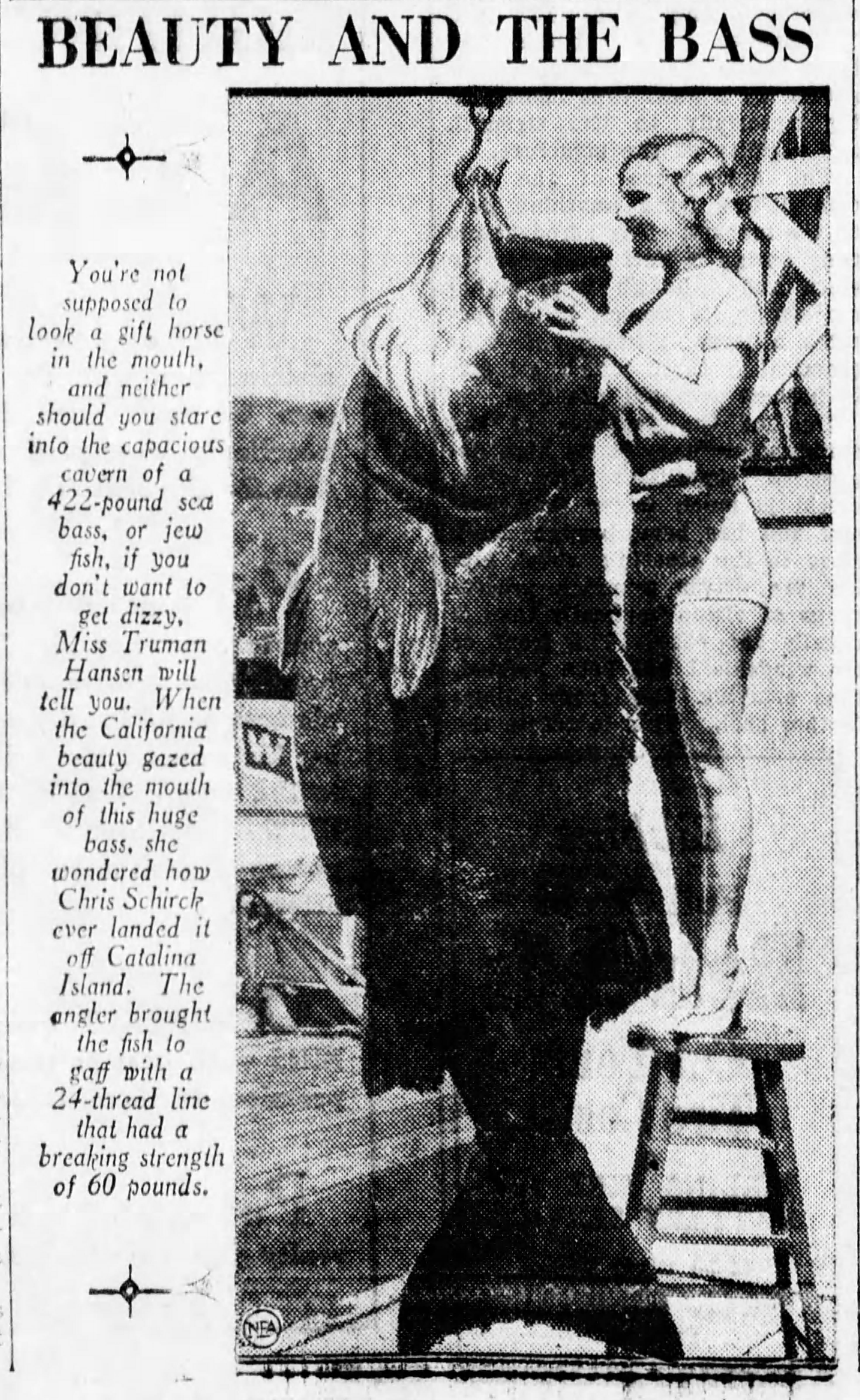 Giant (Black) Sea Bass — In the early years there were an amazing number of large bass caught and many pier regulars specifically targeted the giant bass with special equipment.