In late October of 1991 I visited Eureka to both fish and take pictures of the new Del Norte Street Pier. Imagine my surprise when I discovered that Eureka had two new piers and that they had opened within a few weeks of each other. This tiny pier, although pretty, is really not properly designed for fishing. Nevertheless, it was designed as a fishing pier and the city apparently intends to have it declared a public pier, one that will not require a fishing license.

Environment. The pier is part of Eureka’s Adorni Center, an absolutely beautiful 4.5 million dollar recreation center. The center contains a fully equipped gym, weight rooms, arts and crafts rooms, exercise rooms and, on the outside, to quote their brochure, “a stylish concrete boardwalk which leads to a pier and waterfront pathway.” The entire complex is so state of the art that I hesitate to criticize it, but as to the pier, I think aesthetics were the main consideration. The pier is very small, has a few lights, plastic railing—and nothing else. 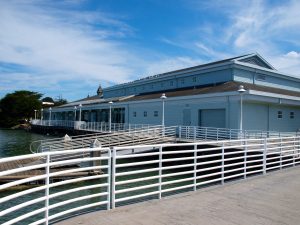 The pier sits over a fairly shallow shoreline area that is primarily mud. Pilings are concrete and covered with barnacles but no mussels, which would attract more fish. To the right side is a small landing for boats and to the left is an older dock that has wooden pilings covered with growth. 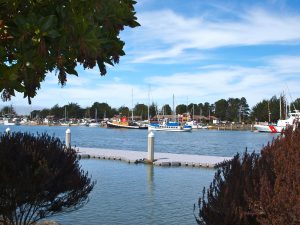 The pier sits directly across the channel from the marina on Woodley Island. The channel is fairly deep and is one of the main channels connecting the waters of Humboldt Bay to the waters of Arcata Bay. One result is frequently strong tidal action. If planning to fish on the bottom be sure to bring either surf type sinkers or sinkers which are heavy enough to hold bottom. A second problem at times is the rowing craft that come in to land at the adjacent float. Crews and individual rowers from Humboldt State University use this channel for rowing practice. It is interesting to watch the crews practicing but also can be disconcerting to have them cross over your line and it is easy to cast far out into the channel. 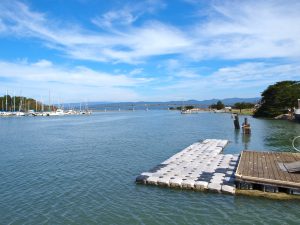 Because of the location (just down the waterfront from the entrance to the Eureka Slough, which itself drains water from Freshwater Creek, Fay Slough, and several other gulches, creeks and sloughs), this area is more estuarine in nature than piers closer to the main bay. Fisherman therefore should expect to catch less species like rockfish, lingcod and cabezon, but expect to catch more species like steelhead trout, salmon and sturgeon. The Mad River Slough, to the north, is a noted area for leopard sharks and it is expected that this area should also yield many of these fine fighting and eating fish as well as the large bat rays and skates that inhabit Arcata Bay. The most common fish however will continue to be smaller fish like walleye and silver surfperch, jacksmelt, and bottomfish, particularly starry flounder and sole. Unfortunately, shinerperch sometimes seem to cover the shallow waters near the pier, and staghorn sculpin the deeper waters of the channel, and it can be almost impossible to keep them off your hooks when your trying for more desirable species. 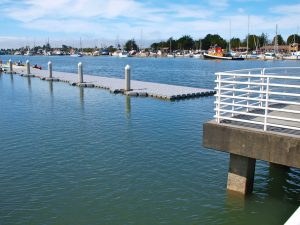 Fishing is allowed from the adjacent float

Fishing Tips. Bring two poles; a heavier pole to try on the bottom for sharks and rays —or flounder and sole, and a lighter pole to try for perch or jacksmelt. For sharks and rays use a fairly heavy line, size 2/0-4/0 hooks and squid or a small fish for bait. Many local anglers like to catch small shinerperch or walleye surfperch and use them whole for leopard sharks. For flounder or sole try tubeworms, strips of anchovy or ghost shrimp. It must be noted that there are considerable numbers of crabs in this area. It can be almost impossible to keep Dungeness crabs and rock crabs from attacking any bait used on the bottom—especially if you cast out into the mid-channel area.

For perch, use a high/low leader, size 6 or 4 hooks, and tubeworms, small pieces of market shrimp, strips of anchovy, crab backs or small pieces of clams for bait. Try different water depths until you find where the perch are biting. For the jacksmelt, rig up several size 8 hooks on the line, fish just under the surface using a float, and make sure each hook is baited with a small piece of tubeworm. If the jacksmelt are present an angler should easily fill up a bucket with fish (and the same rigging can also be very effective for walleye surfperch).

Crab fanciers should always bring along a crab net since it shouldn’t be too hard to get a limit of crabs (but remember that the season for Dungeness Crabs is January through July).

<*}}}}}}}}}>< — The Adorni Center sits just down the hill, about a block and a half away, from the magnificent Carson Mansion and the restored Victorian “old town” section of Eureka. The area deserves at least a short visit while you’re in Eureka. 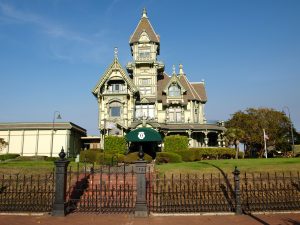 History Note. Although this is the northernmost pier in the bay open to anglers, piers and wharves dot the entire area and have done so for over a hundred years. Woodley Island, just across the water from this pier, began its commercial life when a large wharf was built in the 1870s. Arcata Bay, to the north, was an important port after 1855. That year saw the construction of a long wharf that stretched between the mudflats of Arcata and the deeper waters of Arcata Bay. It allowed Arcata to become the major port for the nearby Trinity gold rush of the 1850s. The wharf remained in use until 1914.

Handicapped Facilities: None, although restrooms are available during daylight hours at the adjacent Adorni Center. Concrete surface with railings that are 38″ high.