Yet when beachgoers turn inland, the modern Avila they see bears no resemblance to Avila of yesteryear.  To the north, a former oak-studded hillside lies invisible under a hulking resort hotel that looms pinkly in the distance. Below, a sleek new bridge spans San Luis Creek as it flows to sea. Children frolic on a state-of-the-art playground; few of them use old metal swings, which still occupy their timeworn location in sand near the pier.

The pier itself has undergone a succession of changes. Mother bought my childhood friends and me snow cones and penny candy from flimsy wood shacks built at the foot of the pier. Vendors conducted business behind the splintered counters of these structures, which leaned precariously over the sand on rickety stilts. Among pier pilings, rubber surf riders—precursors to modern boogie boards—and colorful beach umbrellas stood available for rent.

In the mid ‘50s, the dilapidated snack food huts relocated across Front Street into more respectable buildings. Sandy’s Munchies, Pete’s Seaside Cafe, Barbara’s By the Sea, and The Jetty comprised a new lineup. The Weenie Queen hawked hot dogs from a sidewalk cart. My teenage daughter found summer employment slinging hamburgers at Sandy’s, on the corner just up from the laundromat. Locals preferred worn stools at Pete’s counter or shabby booths next door at Barbara’s. Tourists with more formal dining in mind occupied picnic- style tables in The Jetty, or walked farther along Front to dine at The Old Custom House. Originally serving as headquarters for customs agents assigned to Harford Pier, The Custom House, along with Mr. Rick’s, were two moderately upscale businesses in Avila.

Mother’s great-grandchildren love Avila. They chase waves and dig in sand, collect shells and delight in peering into bait buckets on the pier. The fundamentals of this place—sunshine, waves, sand, seagulls, tourists—are as familiar to these children as they were to her.

I miss the charm and character of Old Avila, but it is pointless to project my attitude onto a generation for whom this slick new beach town is familiar and friendly. Avila will prosper and endure in its transformation. Those age-old attractions of sand and surf will complement its modern visage and captivate all those unfortunate folks who never had the pleasure of knowing eccentric, unsophisticated, genuine Avila. 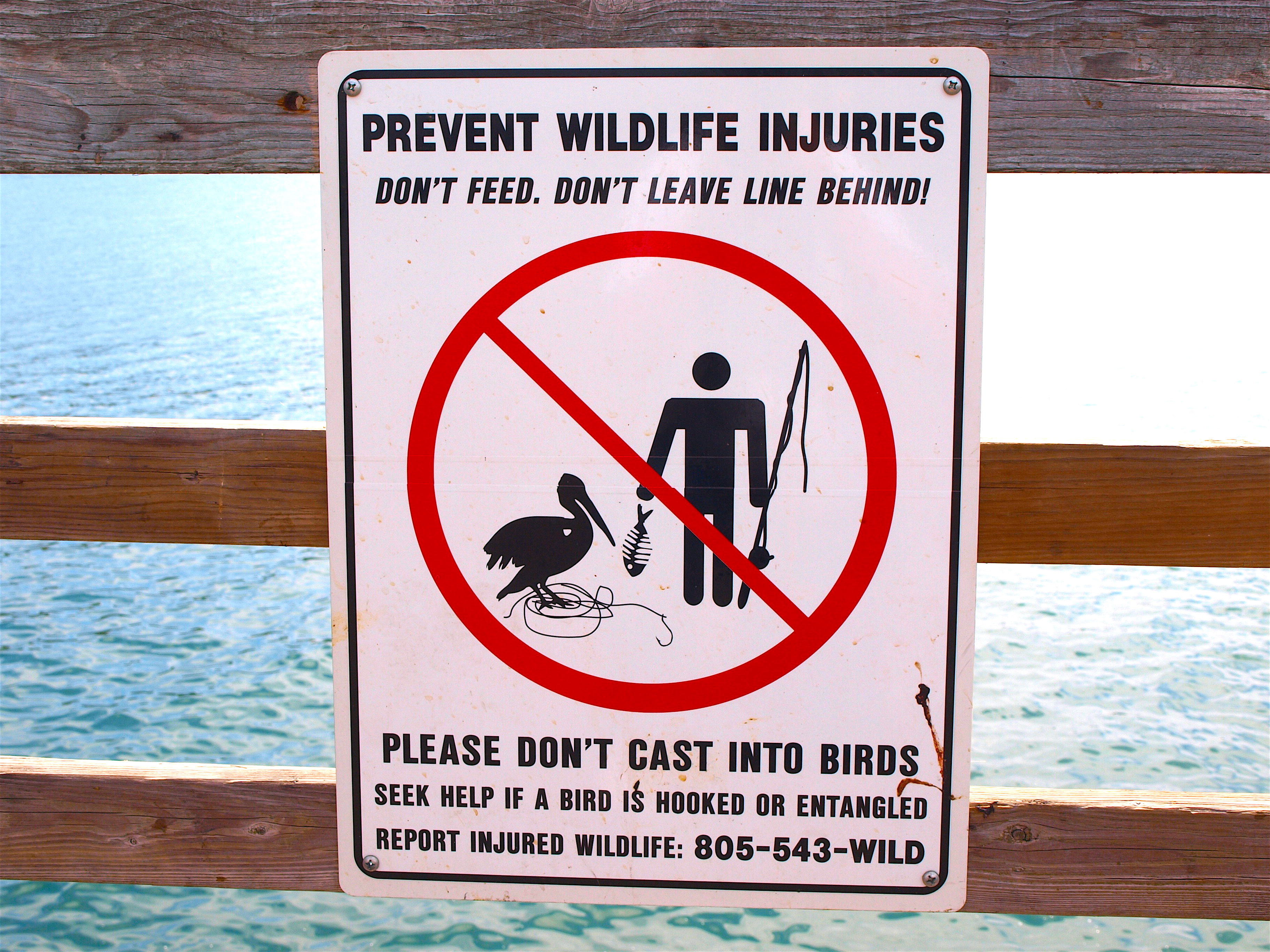 History Note. The town is named after Miguel Avila, the grantee in 1839 of Rancho San Miguelito, the site of today’s Avila Beach. Avila had become alcalde of San Luis Obispo in 1849 but like many Californios suffered heavy losses during the drought years of the mid-1860s. In 1867 his son, Don Miguel, laid out the town of Avila Beach and began to sell lots to settlers and businessmen.

The first wharf (of sorts) in the area was one built by David Mallagh at a cave roughly a half-mile east of Avila in 1855 (or 1860). Near the “Robbers Cave” was a level rock that jutted out nearly 150 feet into the water forming a natural pier. This had been a favorite fishing spot for the local Indians and became the site for the “wharf.” It was called Cave Landing or Mallagh’s Landing and was a primitive affair. Freight, mainly grain, hides and tallow from inland areas, would be lowered down from the cliff by means of a crane. Ship passengers would be lowered overboard by baskets into a rowboat which would then take them to the landing whence they were hoisted up to the rocks up above. Mallagh would then provide transportation for the passengers to San Luis Obispo via his stagecoach. A rocky trail still leads down to Pirate’s Cove, the sandy beach below the promontory. Today it’s a nudist beach, oops clothing optional beach. Apparently it’s quite popular for those wanting a good view of San Luis Obispo Bay—and nature. Right!

Mallagh’s Landing proved to be too shallow for the larger ships of the day so in 1868 a new wharf, People’s Wharf, was built near the site of today’s Avila Beach Pier. In 1873 it was purchased by local merchants who extended the wharf into deeper waters able to handle the large ships. Soon steamers were landing several times a week. A narrow-gauge railroad operated from the end of the wharf to a warehouse in Avila Beach. A horse-powered, narrow gauge tramway operated between Avila Beach and Port Harford.

Tsunami records note damage to the Avila Beach Wharf on November 22, 1878 but it was soon repaired and was used successfully for many years. In 1882 the narrow-gauge Pacific Coast Railway replaced Avila’s railroad; it would operate until 1942. However, when the standard gauge Southern Pacific Railroad reached San Luis Obispo in 1894 it meant a quicker and less expensive way for farmers to send their goods, as well as a quicker journey for passengers. Business at the wharf dropped. In addition the wharf suffered the periodic storm damage common to most piers. Following yet one more storm the county reconstructed the wharf in 1908.

With the increase in oil production, business at the bay’s piers would change. By 1910 the Union Oil Company had 205 miles of pipeline running into Avila Beach, (the largest oil pipeline in the world prior to WWI) and it added additional lines into the 1930s. Oil would become the big export from the bay but unfortunately for Avila Beach itself most of the oil would be shipped from Port Harford (that was now better protected) or from a new pier constructed by the Pacific Railway Company in 1914.

By the 1930s competition (Southern Pacific Pier and Port Harford) and a faltering economy (the Great Depression) led to a sharp decline in business; increasingly the recreational use of the wharf for fishing gained in importance. 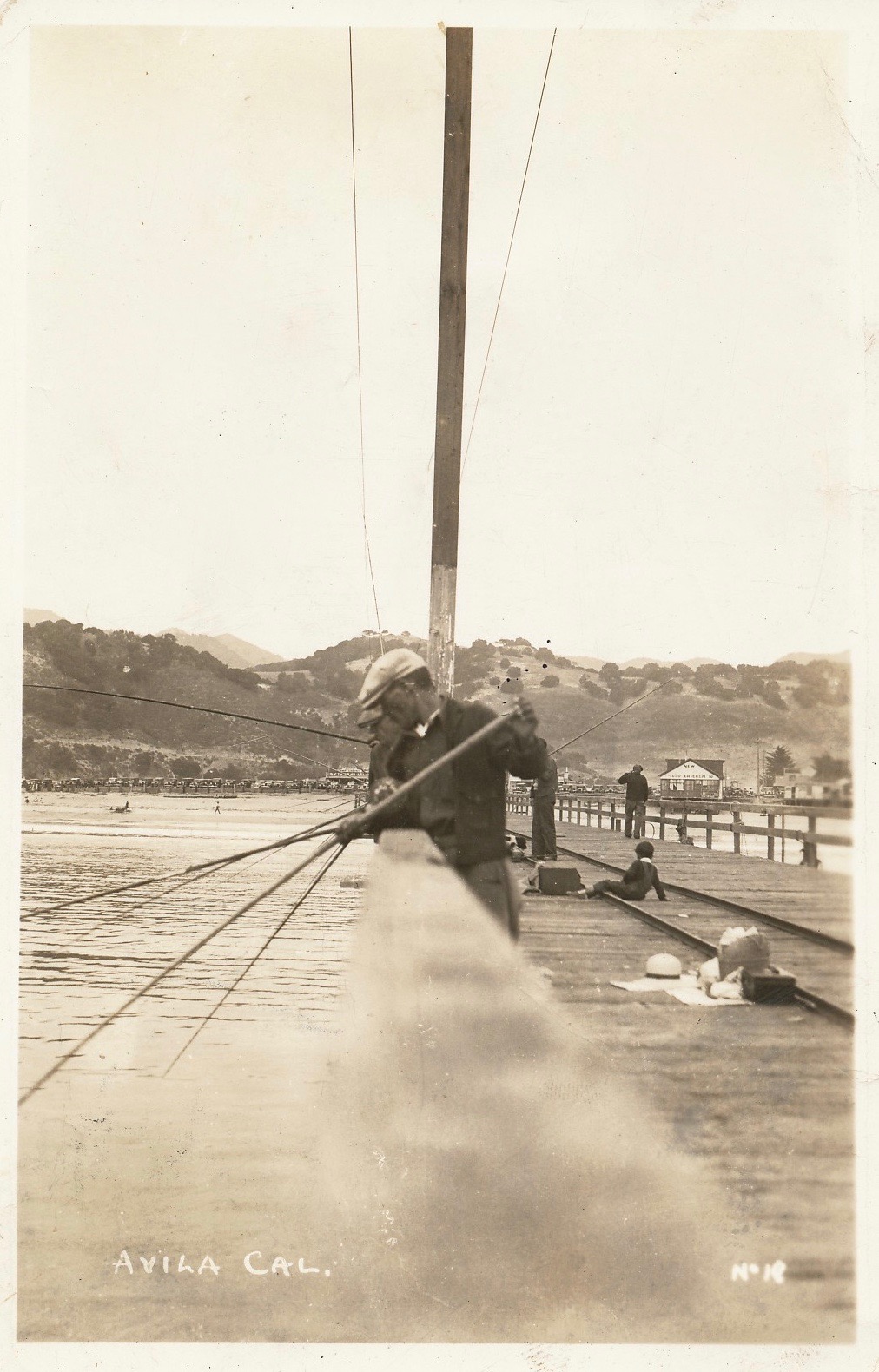 Then on March 1, 1983 the wharf was destroyed by that winter’s nefarious El Niño storm. The pier was split into three sections and people wondered how long it would be until it would be repaired.

The next year, 1984, saw the State of California and San Luis Obispo County transfer ownership of Avila Beach, including the Avila Beach Pier, to the Port San Luis Harbor District. The Harbor District would now spearhead the renovation of the pier. In August of that year the Wildlife Conservation Board allocated $500,000 to be matched by the Harbor District for repair and reconstruction of the pier (with FEMA reimbursing Federal funds). In 1988 the pier reopened and people thought the problems were over.

But NO, just ten years later a plume of oil was discovered under the town and the wharf and the town entered the new millennium in a comatose state. Luckily there was a rebirth and today Avila Beach and its pier are once again favorite seaside destinations for both locals and tourists. Today, recreation is the key word and things look rosy—for now.

The second pier that a visitor sees, a pier located just up the shoreline from the Avila Pier, is a private pier that has seen several different names and different missions. Today it is the home for the Cal Poly Center for Coastal Marine Sciences.

The pier was originally constructed in 1914 by the Pacific Coast Railway Company and used for commercial shipping. Soon after, the Union Oil Co. of California (later Unocal) leased the pier and expanded their operations (they were already shipping oil from the Harford Pier). In 1923, after the last oil was shipped from the Harford Pier, the Pacific Coast Railway Pier served as the sole shipping spot for oil out of San Luis Obispo Bay.

In 1941 Union Oil bought the Pacific Coast Railway Co. Pier and changed the name to the Union Oil Pier. The pier would now play an important roll in supplying the U.S. Pacific Naval Fleet with fuel during World War II.

The pier remained a major oil shipping point until March of 1983 when the El Niño storm that destroyed the Avila Pier included the oil pier as a victim. Quickly, in 1984, Unocal built a new pier. The company spent $27 million to replace the wooden pier with a new steel and concrete pier. Built on the same site as the original pier, the new pier extended six-tenths of a mile into the bay. It would transport an average of 8 to 10 million barrels of crude oil and refined products per year until the mid-1990s when Unocal decided to end its oil operations at the pier. In 2001 Unocal donated their pier to Cal Poly’s College of Science and Mathematics. Today the pier sits there, midway between the Avila Pier and Port San Luis Pier, inviting but unavailable to the angling fraternity.

Hours: Open 24 hours a day.
Facilities: Restrooms and showers at the foot of the pier, additional restrooms at the end of the pier. Fish-cleaning stations, benches, and lights on the pier. Free parking is available at the foot of the pier on Front Street but it fills up quickly (arrive early or arrive late).
Handicapped Facilities: Handicapped parking but non-handicapped restrooms. The surface of the pier is wood planking with some of the spaces between the planks fairly wide and perhaps unsafe for wheelchairs. A concrete ramp leads to the pier and the rail height is 44 inches. Not posted for handicapped.
How To Get There: Take Hwy. 101 to Avila Rd. and go west; turn left off of Avila Rd. on to Front St. and follow it to the pier.
Management: Port San Luis Harbor District.