If you’re looking for a place to take the kids fishing, this small pier is a great place to start. The pier is located in the pleasant setting of Dana Harbor and close to the pier sits a park and a shallow-water beach called Baby Beach. Unfortunately, that beach provides the font for one less than desirable nickname for the pier—Baby Beach Pier—but the name does give evidence of the safe nature of the beach in case you want to pay a visit with young ‘uns. 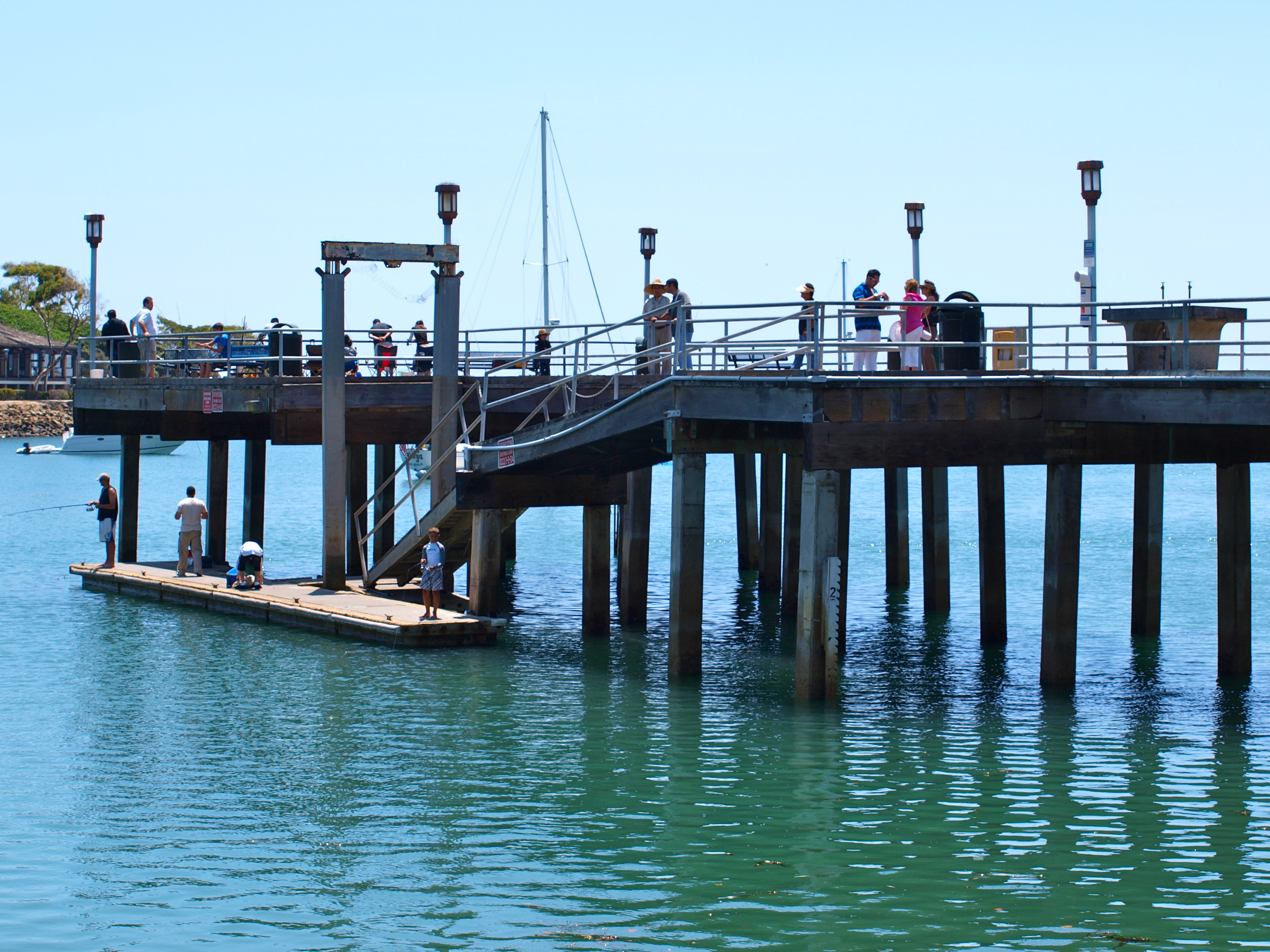 Anglers can fish from top or down on the float

Safe that is as long as you ignore the yearly listing of the beach as one of the most polluted (with bacteria) in the state. However, the county has made a commitment to find the causes of the problem and to fix them; it’s not exactly the kind of publicity a beach intended for kids needs! They’re checkin’ da birds, checkin’ da boats, and checkin’ da storm drains so hopefully the problem will disappear. Interesting is the fact that before the harbor was built the site of the beach was a rocky tidal shoreline with little sand. Sand was brought in to make the beach and new sand is added about every five years. 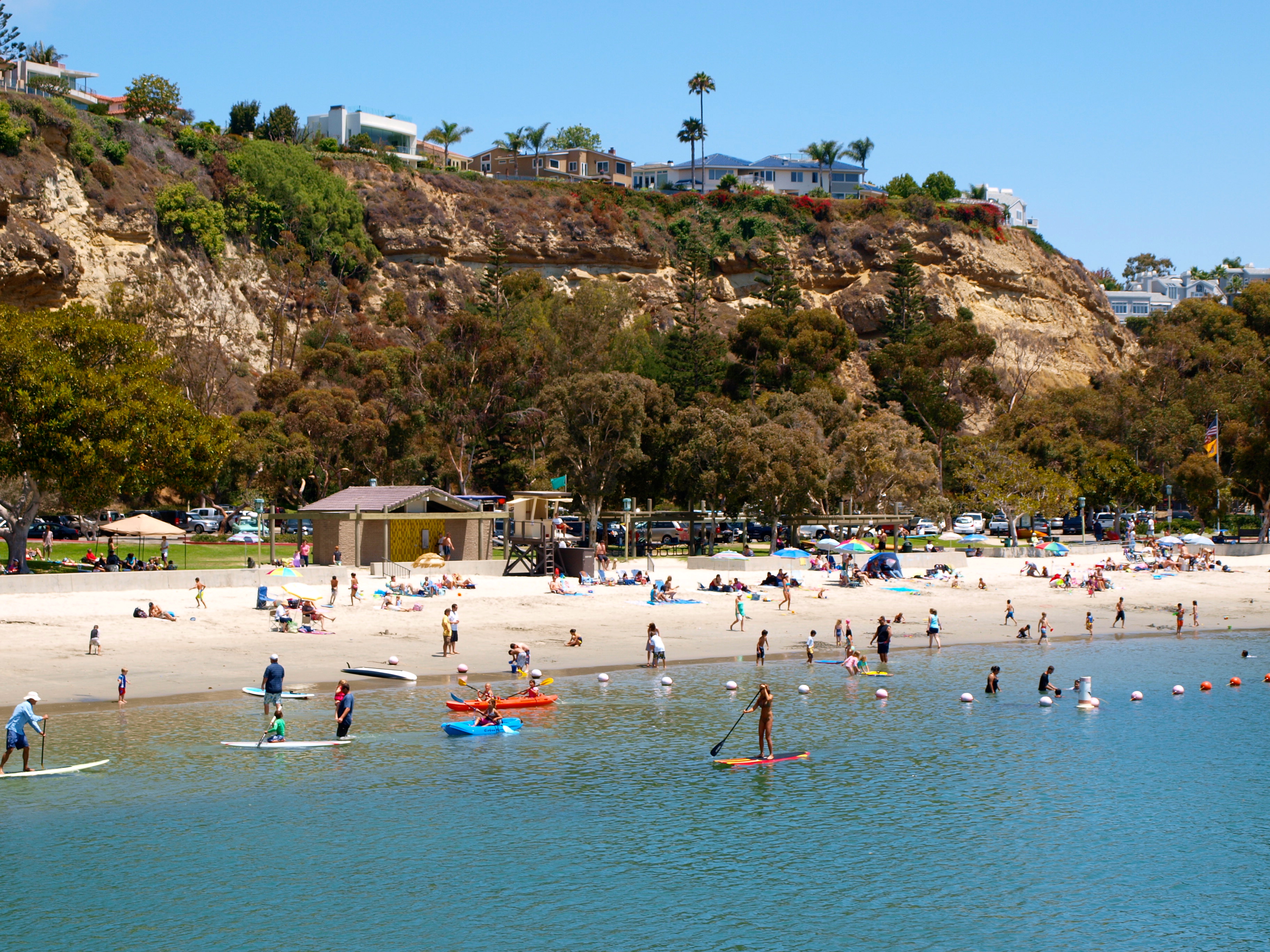 Baby Beach sits to the side of the pier

To the east of Baby Beach sits the main marina area as well as a variety of shops, restaurants and outdoor-related businesses. The pier itself is attractive, well maintained, and receives considerable use given its small 150-foot-long size. Although fishing is generally only fair, there are times when it is excellent. 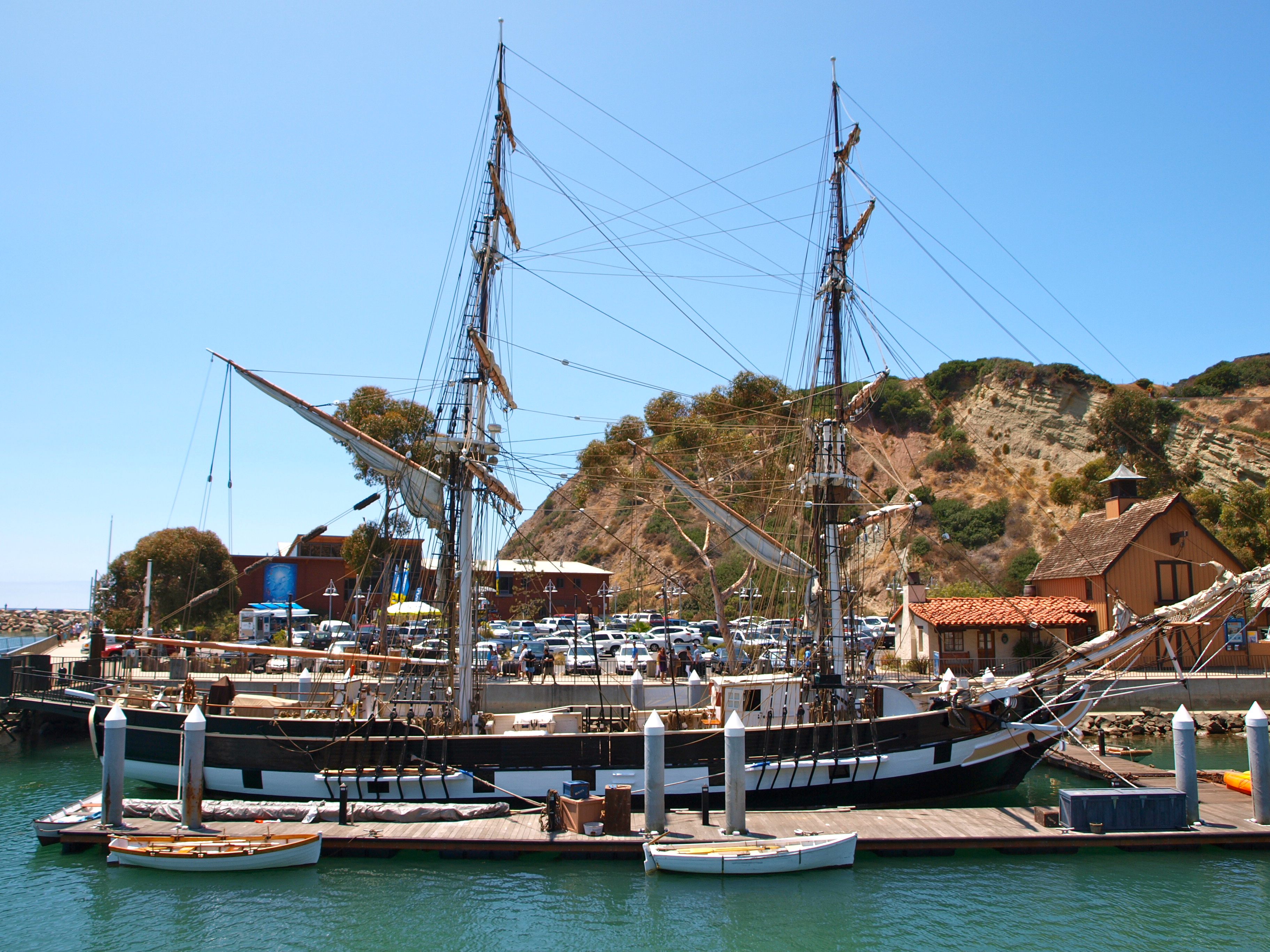 An interesting feature, just a short cast away from the pier, is a 130-foot replica of the brig Pilgrim, the square-rigged sailing ship upon which Richard Henry Dana sailed. The original ship was Dana’s home away from home when he visited the area in 1835; it became famous when he published “Two Years Before The Mast.” Today its copy serves as a home for student tours (so do be careful that you don’t send a lead sinker skidding onto the Pilgrim’s deck). 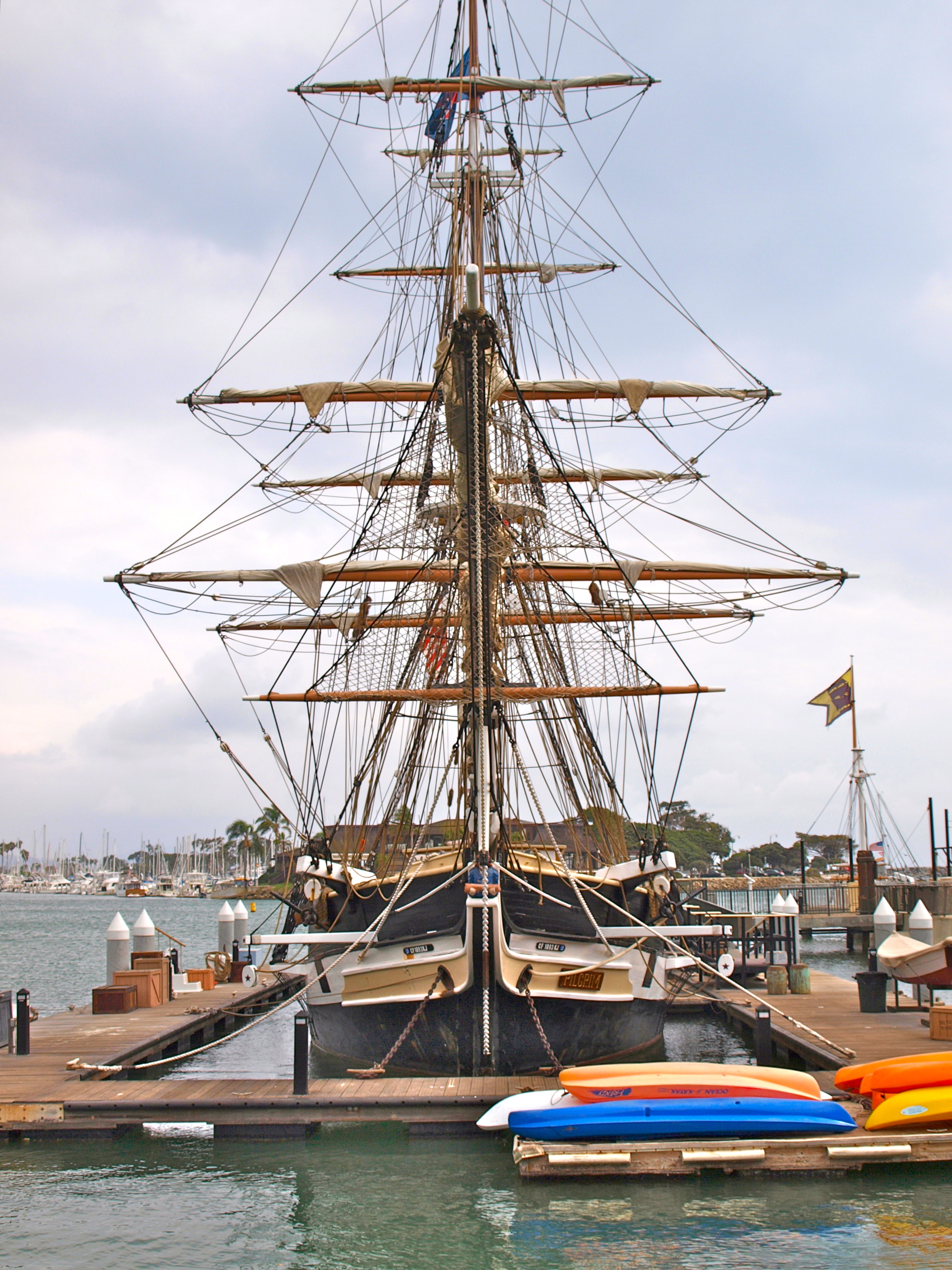 In addition, adjacent and just up the street from the Pilgrim is the Orange County Ocean Institute, a don’t-miss attraction for those interested in the sea. Visit the institute, visit the ship (on Sundays), break for a small lunch, and then take the kids fishing on the pier. Do anything you can to get the kids away from TV and Video games while taking a respite from the normal jog trot of life. 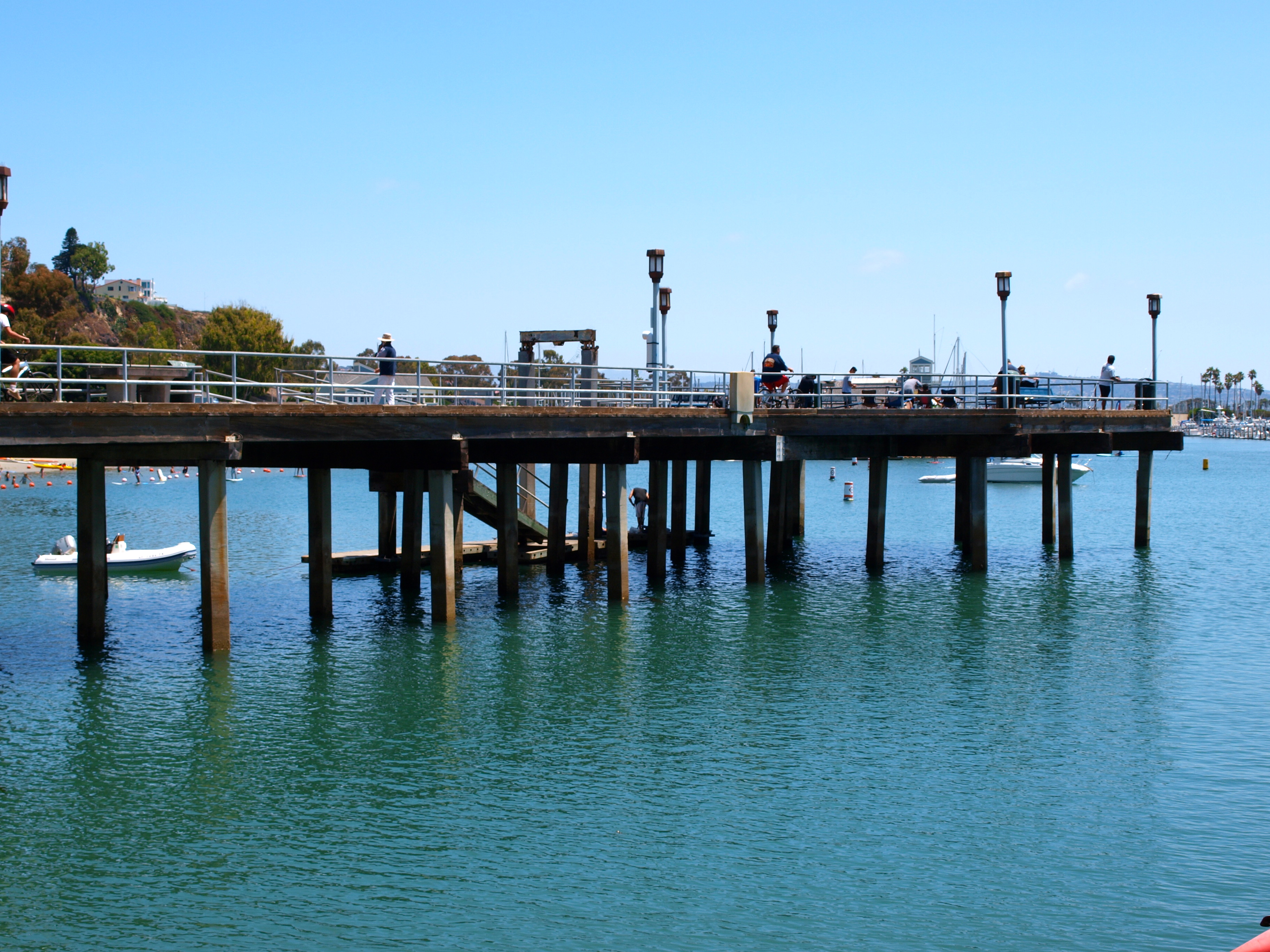 A final note: several times over the years when making my pier hoppin’ expeditions down the coast I’ve arrived at the San Clemente Pier and found parking to be IMPOSSIBLE (especially on mid-day, summertime weekends). Depending upon the time of the day, one solution was to head over to this pier and fish for a few hours; by late afternoon people were headed home and parking would be available at San Clemente. 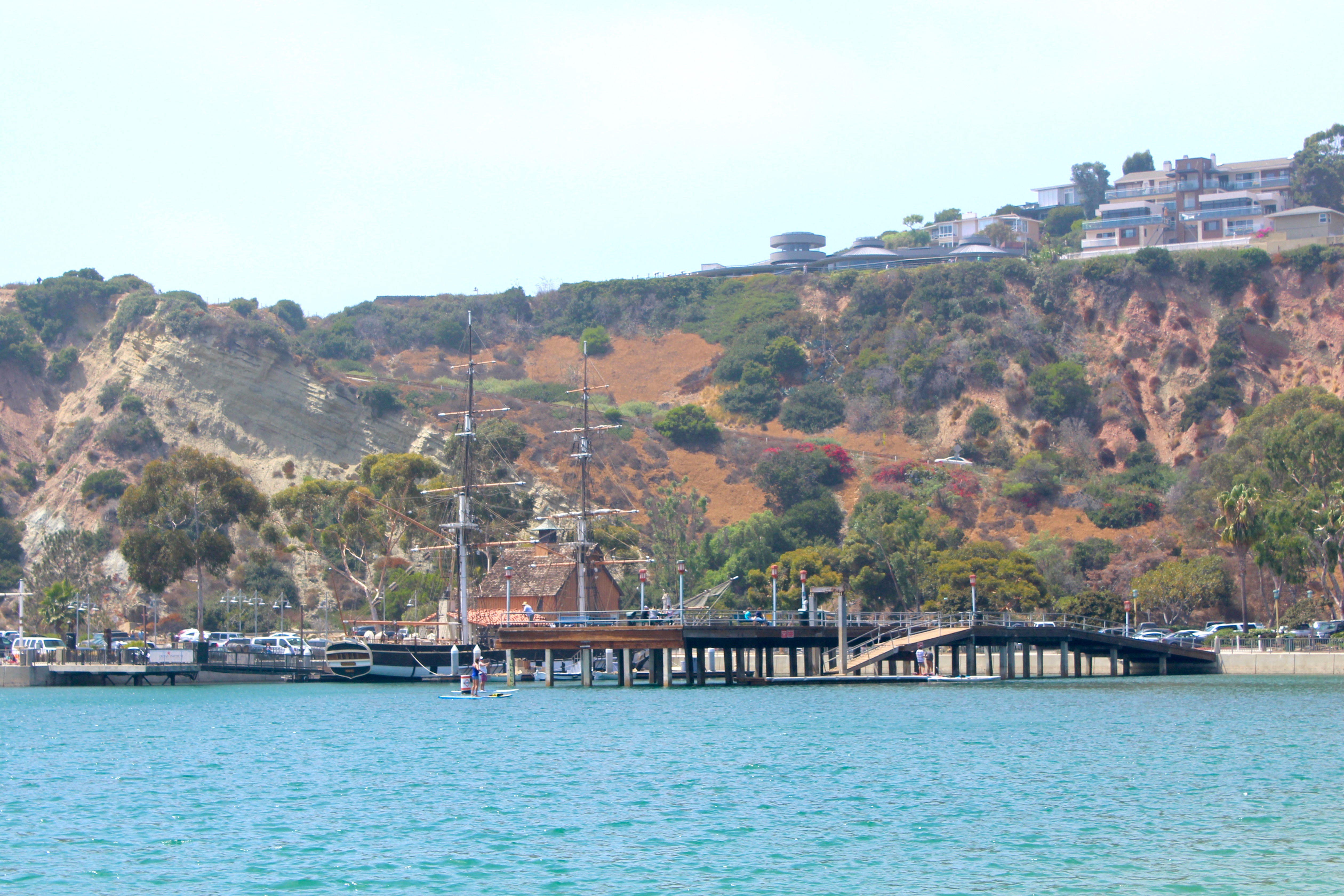 Looking from Baby Beach toward the pier and the Pilgrim

Environment. The pier is situated in the Dana Cove Park area in the northwest corner of the outer harbor. The water is fairly shallow, tidal flow is mild, the bottom is primarily sand, and there seems to be some grass within a short cast on the left side of the pier. Unfortunately, the concrete pilings usually have only moderate fish-attracting growth on them; usually there are some barnacles but not always mussels. 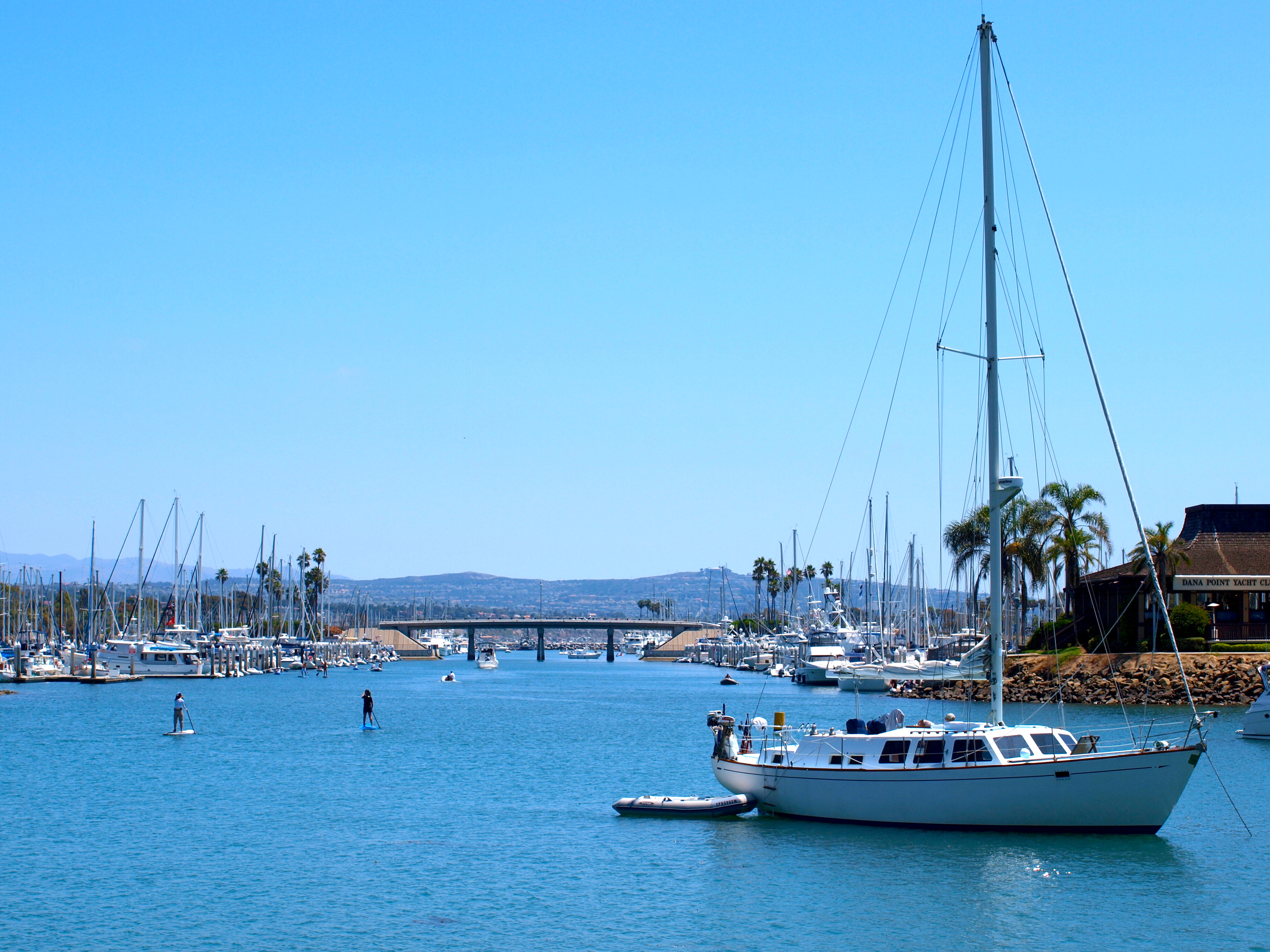 Being a busy harbor means there can be considerable traffic from motorboats and sailboats, especially during weekend days. There is also a small loading dock on the north side of the pier which means you can fish down around the pilings. However, the dock also means boats can be loading and unloading people which can make space a little tight, and fishing a little difficult. One way to avoid the boats is to fish early or late and leave the mid-day sun to the kids. The shoreline itself is covered by rocks so rock-frequenting species will appear, but overall action is slow. 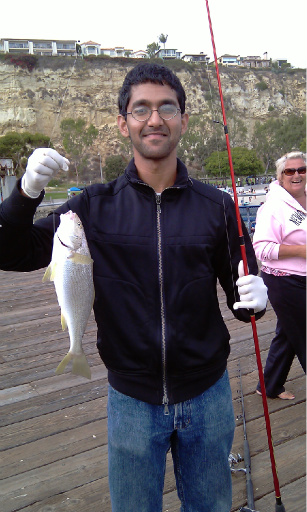 Often you will see fairly large fish jumping in the shallow waters near the adjacent beach. Most of these are mullet, sometimes exceeding three feet in length; unfortunately they are almost impossible to hook. You’ll sometimes also see needlefish swimming near the surface and, like the mullet; they are really hard to hook. Uncommon fish caught from the pier have included bonefish and quite a few yellow snake eels.

I’m not sure if there is a “best” spot on the pier, I’ve caught fish casting out away from the pier, fishing down by the pilings, and fishing the channel between the pier and the Pilgrim. Each location yielded fish, although generally with only a modicum of success. However, the different spots do produce different fish. 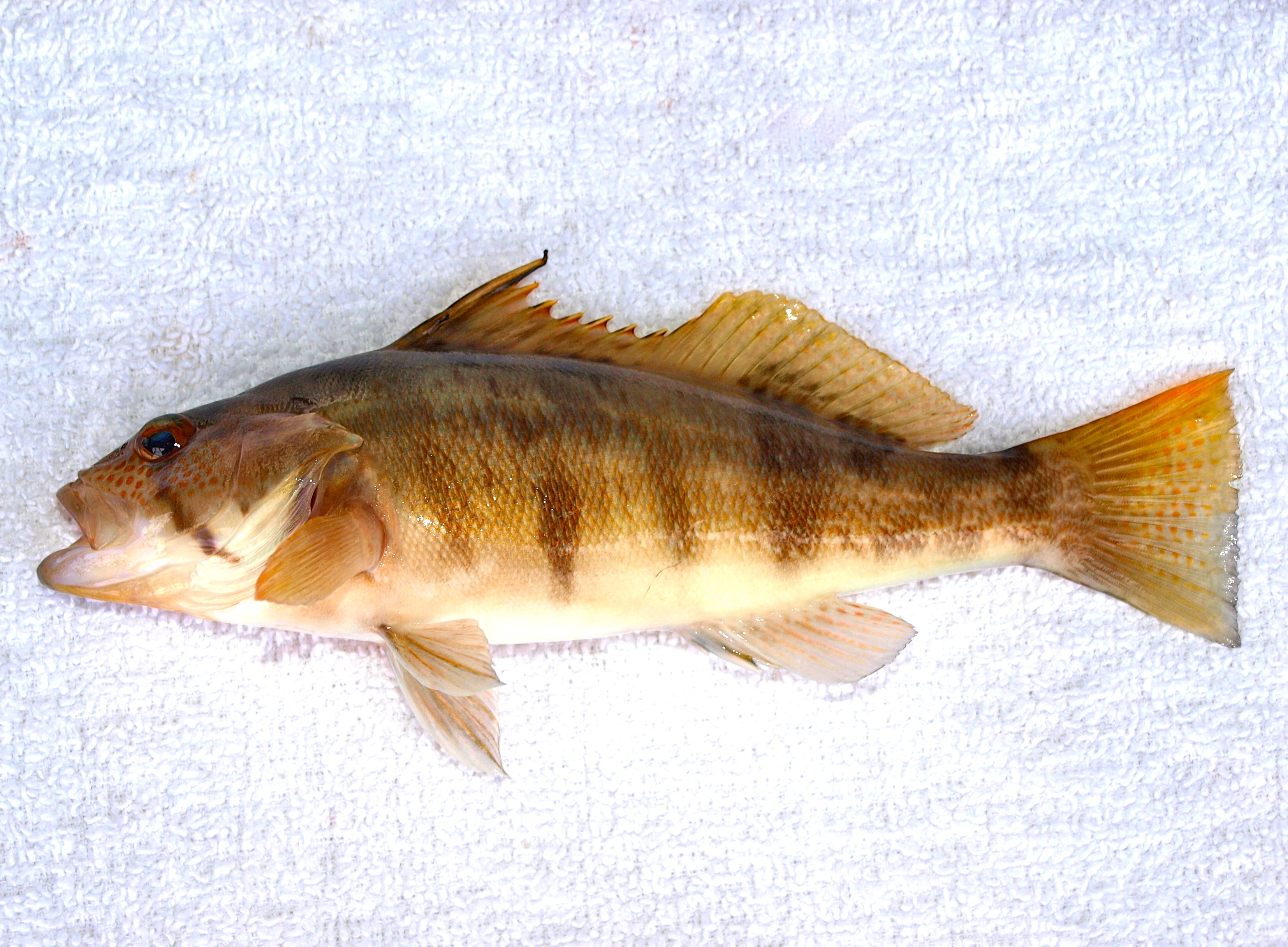 The flats out from the left side of the pier mainly produce a mixture of the normal bay species—perch, croakers, sargo and bass. White seaperch and blackperch will fall for a high/low rigging baited with bloodworms, fresh mussels or small pieces of market shrimp on a size 6-4 hook; if you have live ghost shrimp use a size 4 Kahle hook. Ditto on the area, rigging and bait for yellowfin croaker, spotfin croaker, and bass although hooks can be a little larger, size 4-2. By the way, if you have a choice buy/use small ghost shrimp for the perch, medium size ghost shrimp for the croakers, and medium/large ghost shrimp for the bass. If seeking out the bass feel comfortable using cut anchovies and strips of mackerel or squid. Although the majority of the bass will be fairly small ones, a four and a half pound calico (kelp) bass was caught in September of ’08, a good-sized bass for pier or boat. Bloodworms (or lugworms) under a bobber will sometimes produce big jacksmelt that can surprise you with their fight. Other fish that might surprise you with these riggings and baits include diamond turbot and China croaker (black croaker). I suppose an 18-foot-long great white shark could even surprise you. An 18-foot-long great white shark would certainly surprise me!

Given the close proximity to the water (even closer if you stand on the small dock), it’s a good spot to try artificials for the bass. Try soft plastics such as 3-4 inch Big Hammers, Fish Traps, Scampis, Scroungers or Berkeley Power Sand Worms. One tip is to use freshwater jig heads with your swim baits; they have smaller hook diameters and are sharper. At night try Strike Lites with a swim bait for the bass, I’ve been told it can help. 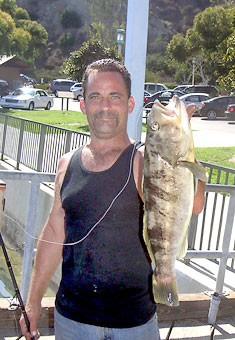 If you’re lucky the artificials might also entice a halibut. Most anglers use live bait (small smelt, queenfish, or shinerperch) on a Carolina rigging for the toothy flatties but lures can often be just as productive. Although the pier is not a noted halibut hot spot, enough are caught to keep it interesting. In fact, there was unconfirmed catch of a 40-pound halibut from the pier.

The right side of the pier presents a narrower body of water—the channel between pier and the Pilgrim but it has often been productive for me. I’ve caught several nice croakers in this area, including a couple of black croakers (China croaker) and seen several halibut landed here. I like to cast close to the ship feeling that some fish will hang under the shade of the boat but don’t do this unless you really know how to cast. That area has also yielded some nice perch. 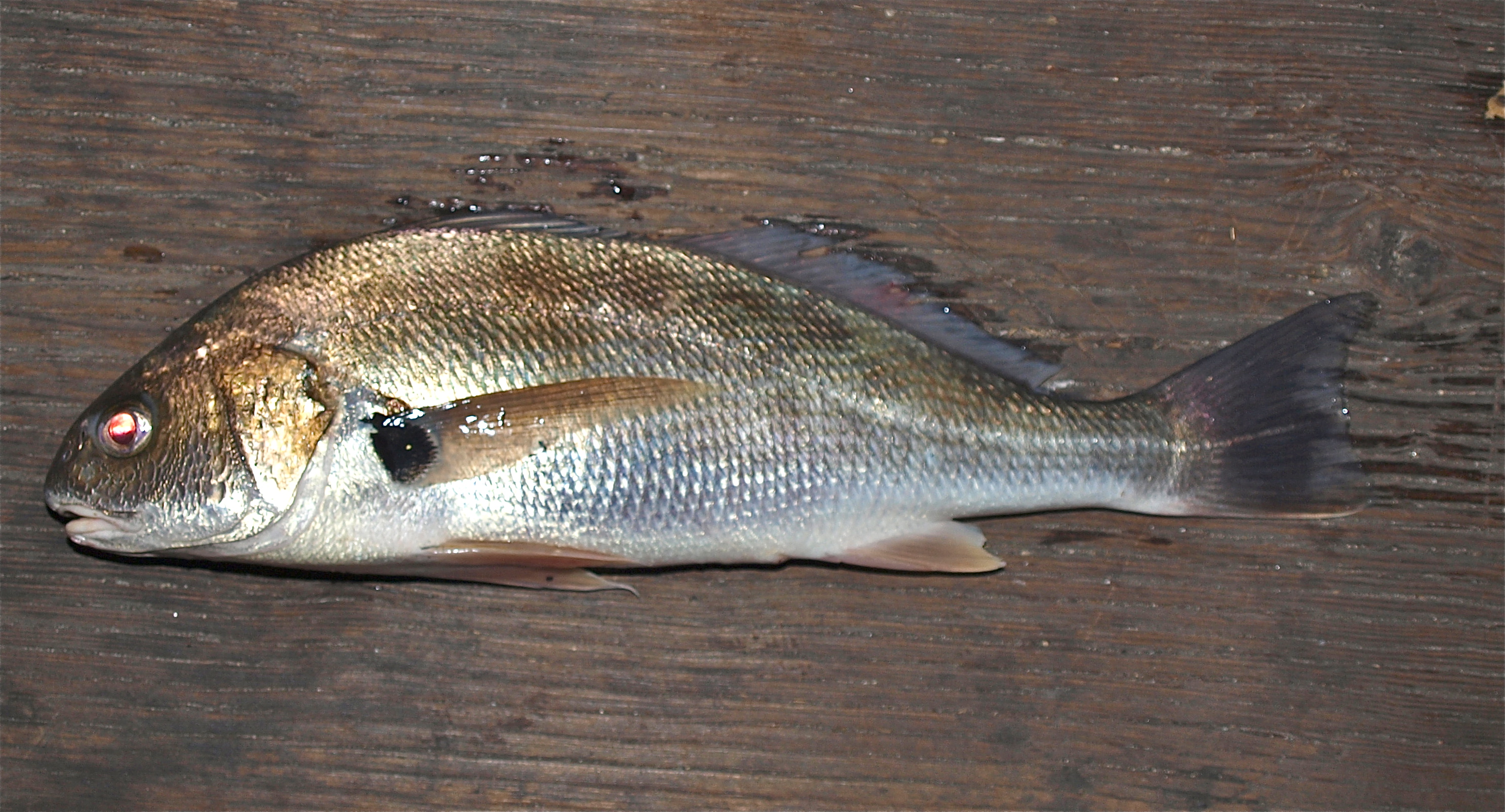 The area straight out from the end of the pier yields these species but also seems somewhat better for the shark and ray species, especially at night. Bloody mackerel and squid will attract the gray smoothhounds and leopard sharks while bat rays seem to prefer squid. Big shovelnose sharks (guitarfish) will hit a variety of baits but often like a lively smelt or small queenfish; small thornback rays and round stingrays will bite almost any bait. If fishing for the big mama bat rays (the big ones are always females) come prepared: several large 100+ pound bat rays have been landed here and you need to have a way to bring them up onto the pier. Hopefully you’ll release them so you also need to have a way to release them with as little trauma as possible.

Three other species are most common at night. California barracuda, mostly sub-legal-size fish will often show at night and hit live baits or, more commonly, whack spoons such as Kastmasters and Krocodiles. Another nighttime visitor rarely seen during the day is the misnamed sculpin (actually California scorpionfish); they prefer a strip of squid on a high/low rigging. Last but not least is the gnarly yellow snake eels and we’ve had reports of them being caught in 2002, 2006, 2007 and 2010 so they no longer can be called rare; uncommon yes, rare no. 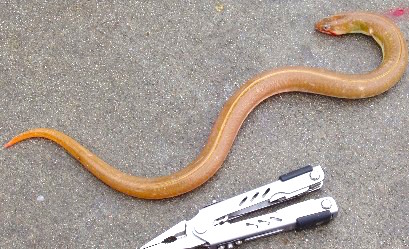 Although not noted for pelagics, the pier will occasionally see good runs of Pacific mackerel, sardines and even, some years, bonito. Most anglers will fish for the macs with either small strips of bait (mackerel or squid) under a split shot, a couple of size 4-2 hooks rigged high/low style with a piece of mackerel, or on a bait rig. The sardines are taken on bait rigs; the bonito are typically taken on a feather trailing behind a Cast-a-Bubble or lures such as MegaBaits.

Fish down under and around the pier for the smaller species. A Sabiki-type bait rig will often yield good catches of topsmelt, jacksmelt, shinerperch, walleye surfperch, or queenfish. At times the bait rigs will also hook under-sized calico bass (kelp bass) and bay bass (spotted sand bass); be sure to return any bass that are under the 14” legal size. 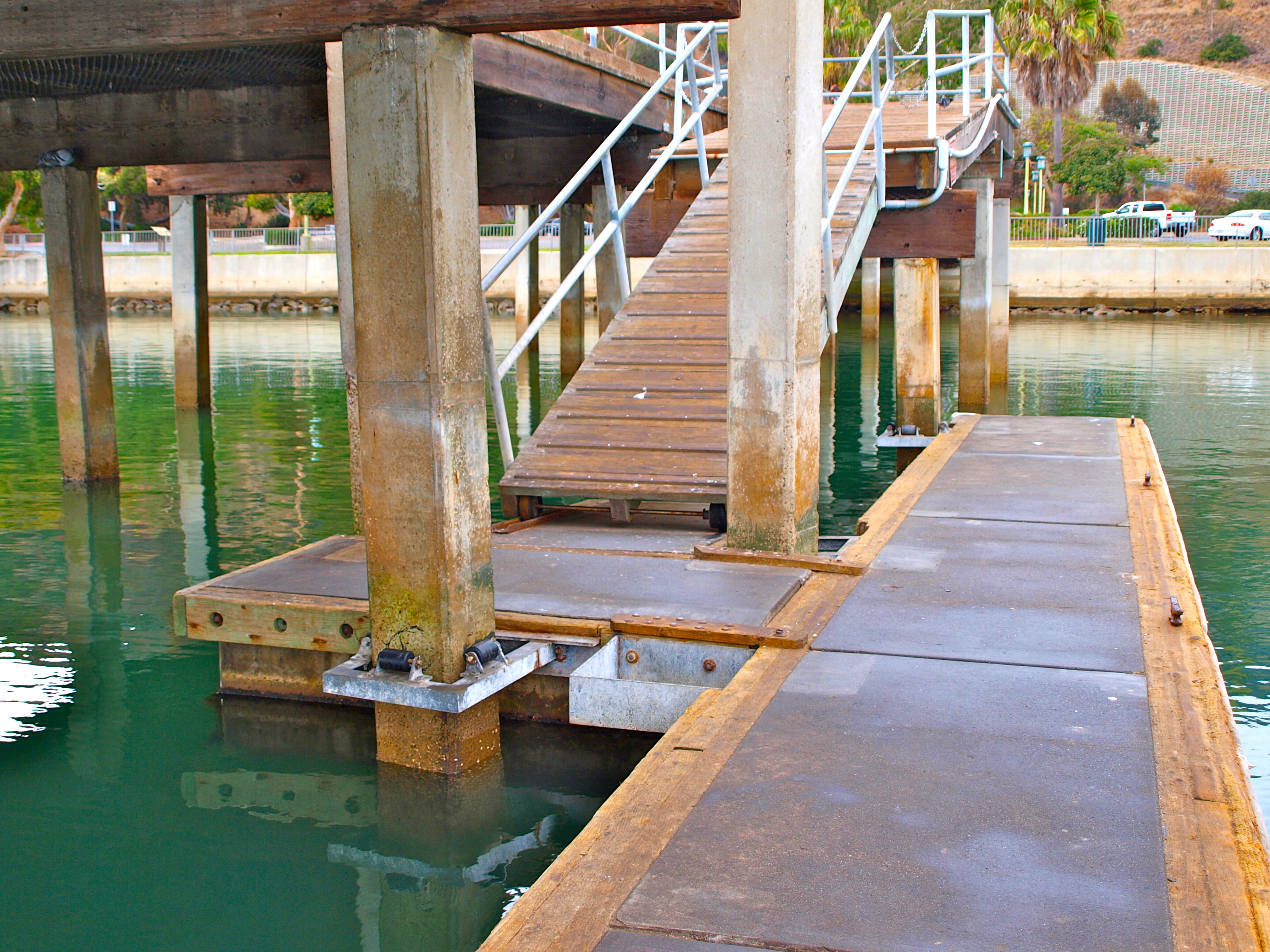 You might also join the kids (as well as learn from them). One day I decided to fish down on the boat ramp along with several young anglers. I fished for an hour and a half using ultra-light tackle, size 8 hooks, and fresh mussels for bait. The result was black seaperch, opaleye, kelp bass, sargo and jacksmelt. Several enticingly large (but illegal) garibaldi and large (but legal) rubberlip seaperch and pileperch circled slowly around the pilings, but all were unwilling to bite. This action is best during the mid-summer to fall months if/when the pilings have acquired a good growth of attractants around them. When the pilings are bare, the fish are gone. 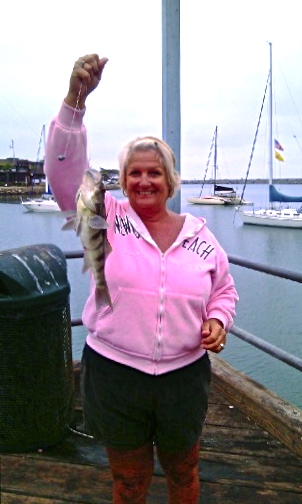 A couple of less commonly caught fish are seen quite often. Needlefish will cruise the top areas of the water and are usually mistaken for barracuda. They’re hard to catch but a small smelt fished under a float can yield the good fighting little fish. Mullet are harder to catch and most commonly caught by snagging. Don’t do it, try baiting small, size 14 hooks with vegetation or dough balls. Do it the sporting way—although it isn’t easy.

Lastly there is the mainly riprap shoreline at the entrance to the pier. It’s really only fishable at high tide but I have managed a few blackperch in the area along with a cute little wooly sculpin one night.