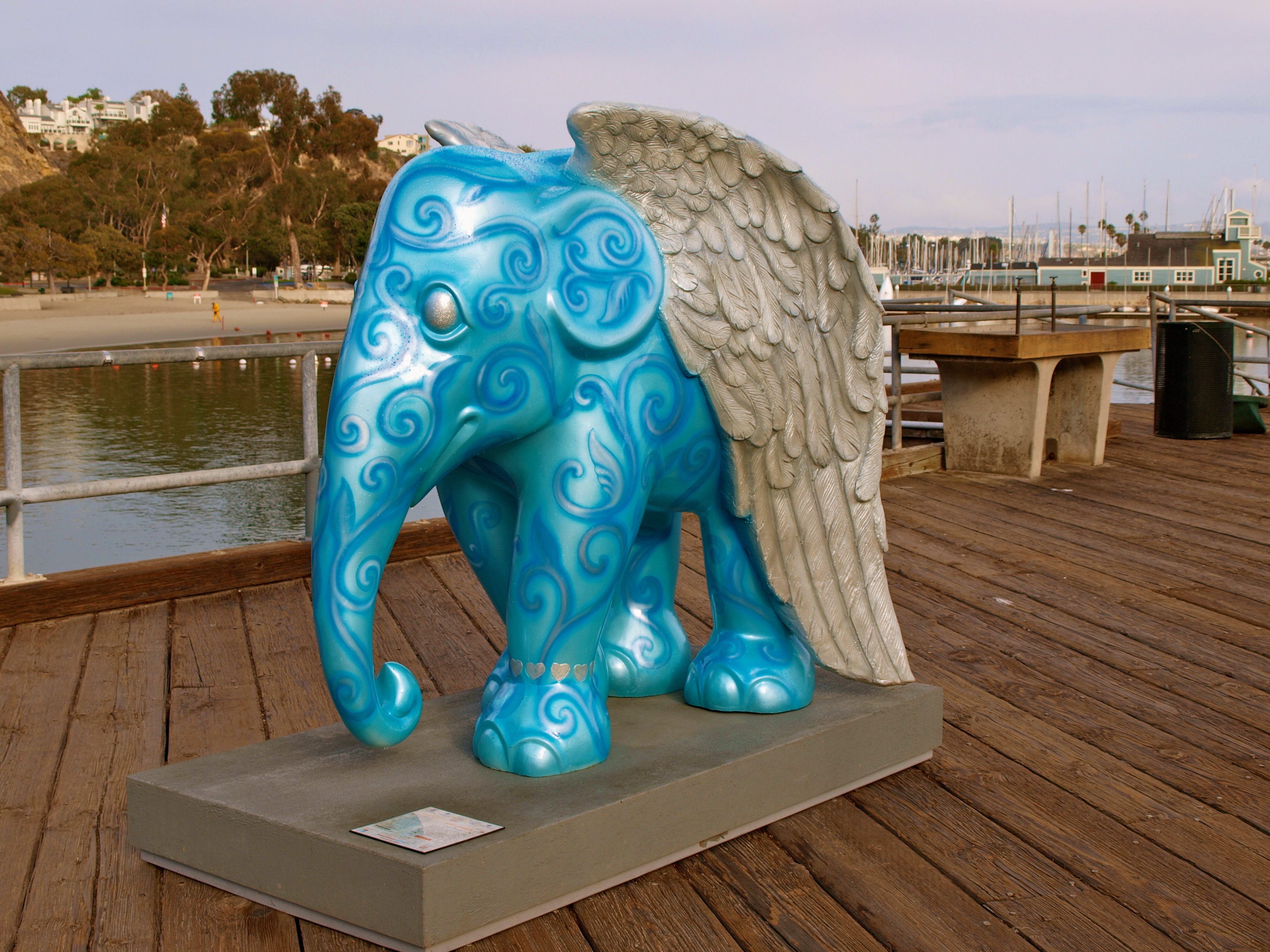 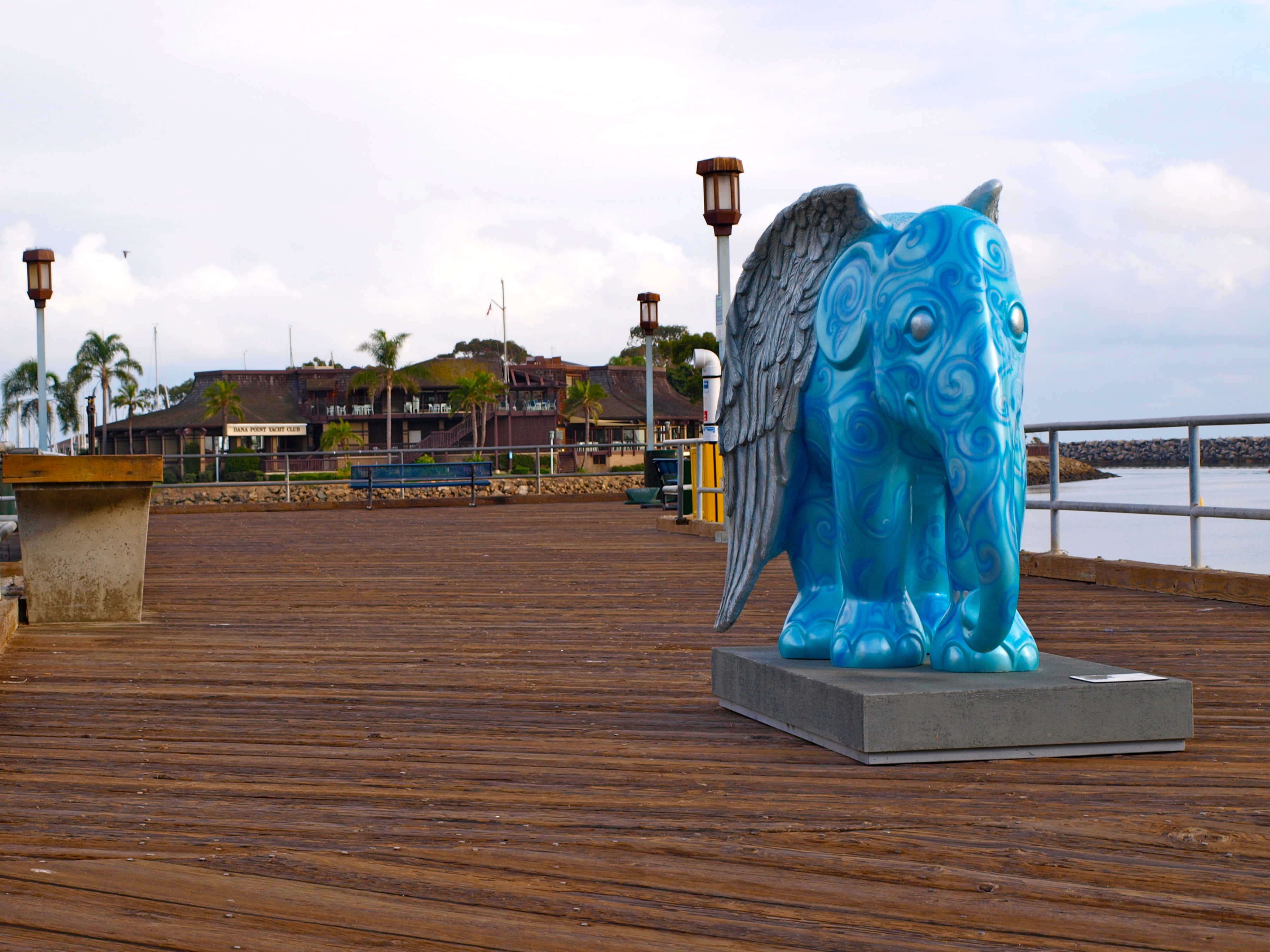 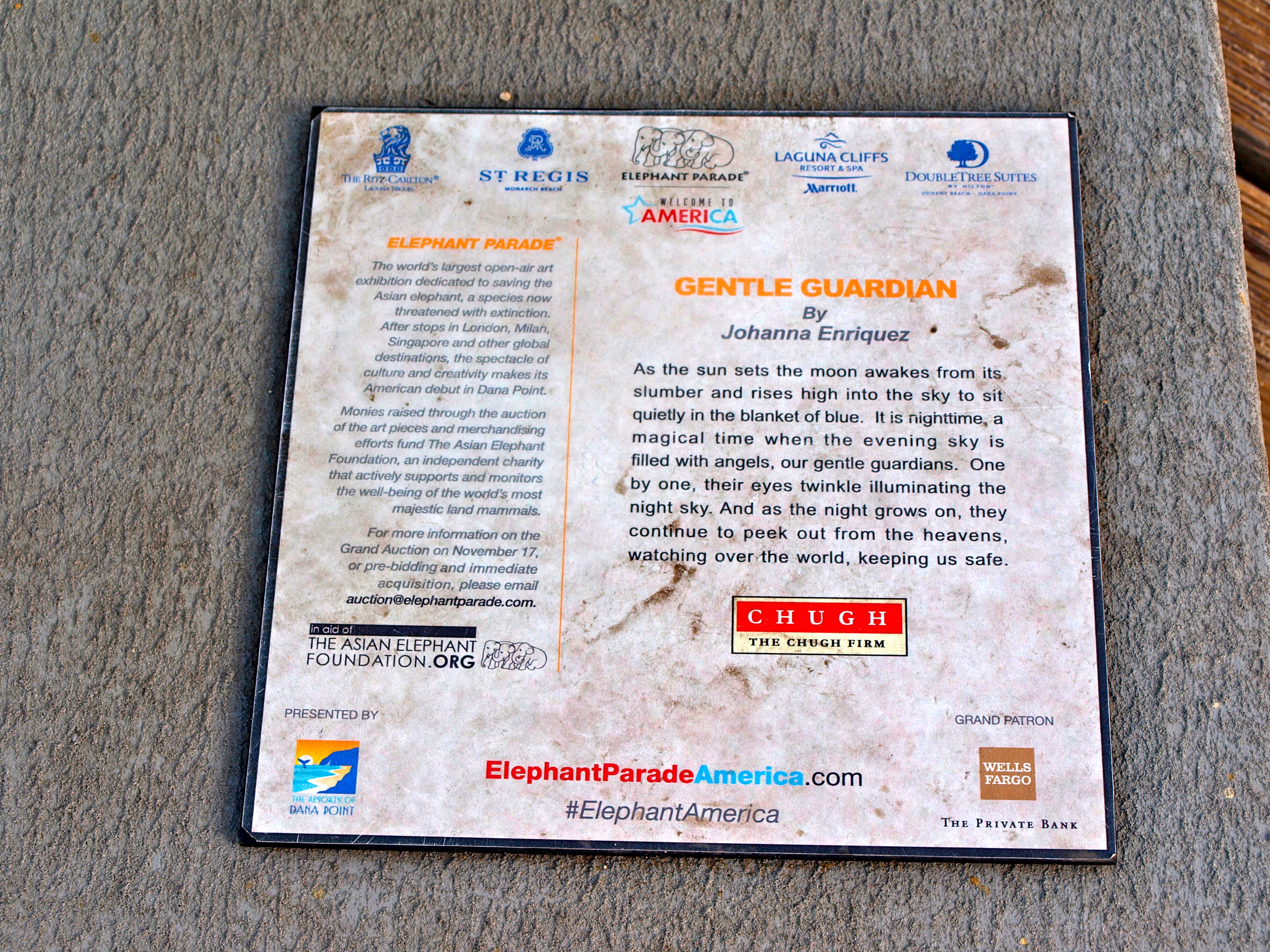 An interesting addition to the pier — 2013

<*}}}}}}}}}>< — California F&G Bulletin #96 from 1953 says of Dana Point, “Located on the coast 16 miles southeast of Newport Beach and seven miles southeast of Laguna Beach. The point is a stubby peninsula with a sheltered cove on the southeast side. It was called Point San Juan Capistrano, after the nearby mission, or was shortened to San Juan Point. It had been called Punta de Arboleda. Richard Henry Dana, Jr., in ‘Two Years Before the Mast’ described (1835) the hauling of dried hides in squeaking carretas from the mission and surrounding ranchos to the point and dumping them over the cliff to be picked up by the ship’s small boats.

This was at the cove which, like the point and the town, has been given the name Dana. The cove is now owned by Mr. Probar and is often called Probar’s Cove. There is a short pier here for the landing of small craft. The town of Dana Point, started in 1926, is on the mesa back a little from the cove. Some people now apply the name Point San Juan to the west corner of the peninsula and Dana Point to the east corner… In May, 1949, about 28,000 pounds of abalone were credited to Point San Juan and 20 pounds in 1950 were so recorded but normally the catches are reported as Dana Point. In 1950 and 1951 the landings at Dana Point averaged 64,000 pounds per year. The species were, in order of volume, lobster, abalone, albacore, sheep-head, barracuda and halibut. The rocky shores of Dana Point and the offshore rocks were the fishing grounds for some of the first paddleboard skin divers along the coast and this area remains an outstanding locality for this sport.”

History Note. All piers see change but few have seen the changes that this pier and area, have experienced.

An “oceanfront pleasure pier” was one of the many attractions that the Dana Point Syndicate hoped would bring buyers to the area (then known as Stillwater Bay) when their $1,150 home sites went on sale in January of 1927. The syndicate’s partners, led by developer Sidney Woodruff (famous as the developer of Hollywoodland, today’s Hollywood), Los Angeles Times publisher Harry Chandler, and General M.H. Sherman, Director of the Pacific Electric Railway Company, bought 1,388 acres of land and envisioned quite a town. Attractions were to include a scenic beach pavilion, a breakwater, a yacht club, and a “Pompeian” bath with heated salt water. The highlight was to be the Dana Point Inn, a luxury hotel that was to include an elevator to bring guests from the hillside hotel down to the beach. However, only 35 homes and several commercial structures were built before the Great Depression brought an end to the developers’ dreams. 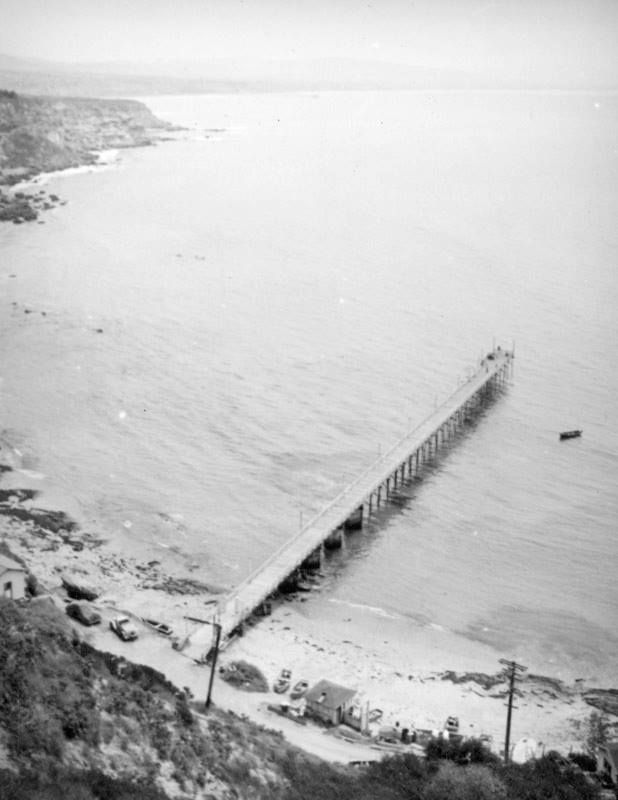 But at least one structure had been built—the “pleasure pier.” That 304-foot-long wooden pier (some sources say 295 feet) was located in the cove at the base of the cliffs, a cove that sat inside the protective curve of Dana Point, and a cove that eventually gained the name Stillwater Bay. 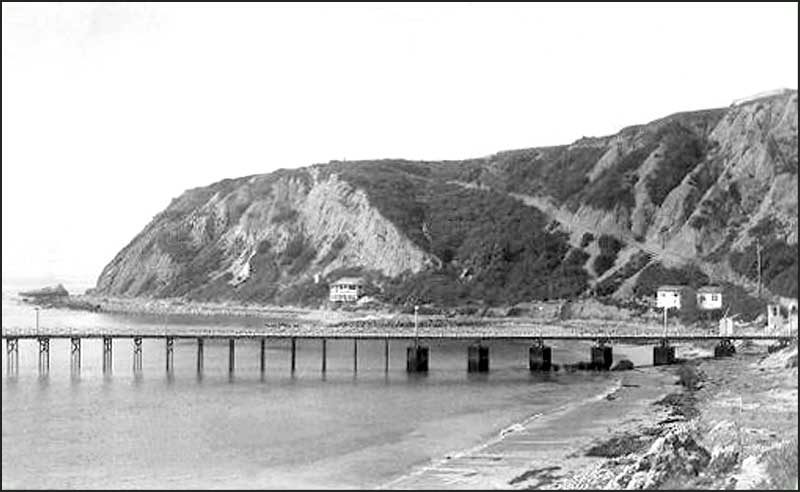 Fisherman were attracted to the area and the words on one brochure—“The wise birds fish at Dana Point”—seemed to come true. The pier was a popular and heavily visited site and even included its own Sportfishing barge, the Ace I. 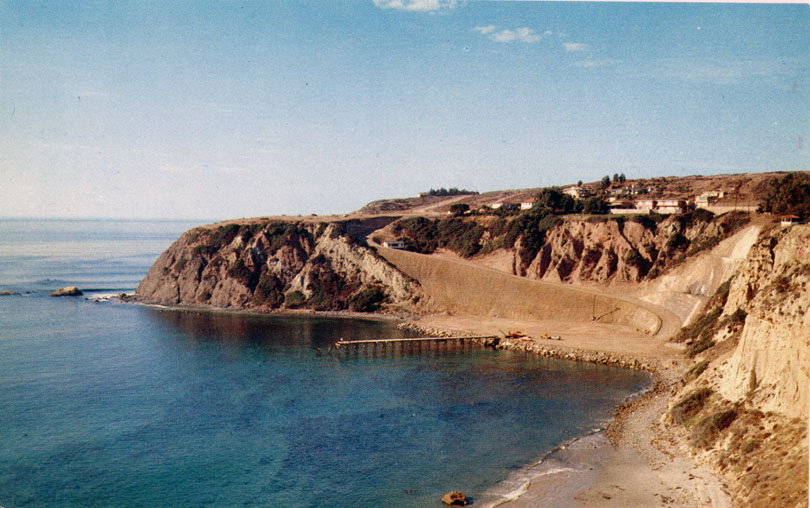 However, in 1956 the Orange County Board of Supervisors began to develop Dana Cove as a recreation area. An early necessity was a parking lot for the cove and a dike to protect the lot. Soon, a dike began to be constructed near the shore end of the pier and eventually the pier was severed with the dike running through the innermost section of the pier. The original inshore section now ended at the dike, and the outermost section started at the dike. Development in the cove continued throughout the year. Barbecue and picnic areas, restrooms, and new roads were added. Then, in January of 1957, the old, and by now rotting, pier was demolished.

A new 300-foot-long oceanfront-fishing pier was then designed and constructed. At the same time, calls began to be heard for changing the cove into a truly protected harbor. When state and federal backing for the harbor project was gained, it made inevitable an ending for the “oceanfront” pier at the cove. Dredging and expansion during the ’60s and ’70s turned the harbor into a protected bay and turned the pier into a small bay pier.

The pier was shortened at the time of the harbor expansion and then refurbished in 1988. Some decking was replaced as were some pilings, a new gangway and float were installed, fish cleaning facilities were added, and the snack bar and bait and tackle shop were moved off the pier and placed at the shoreline entrance. 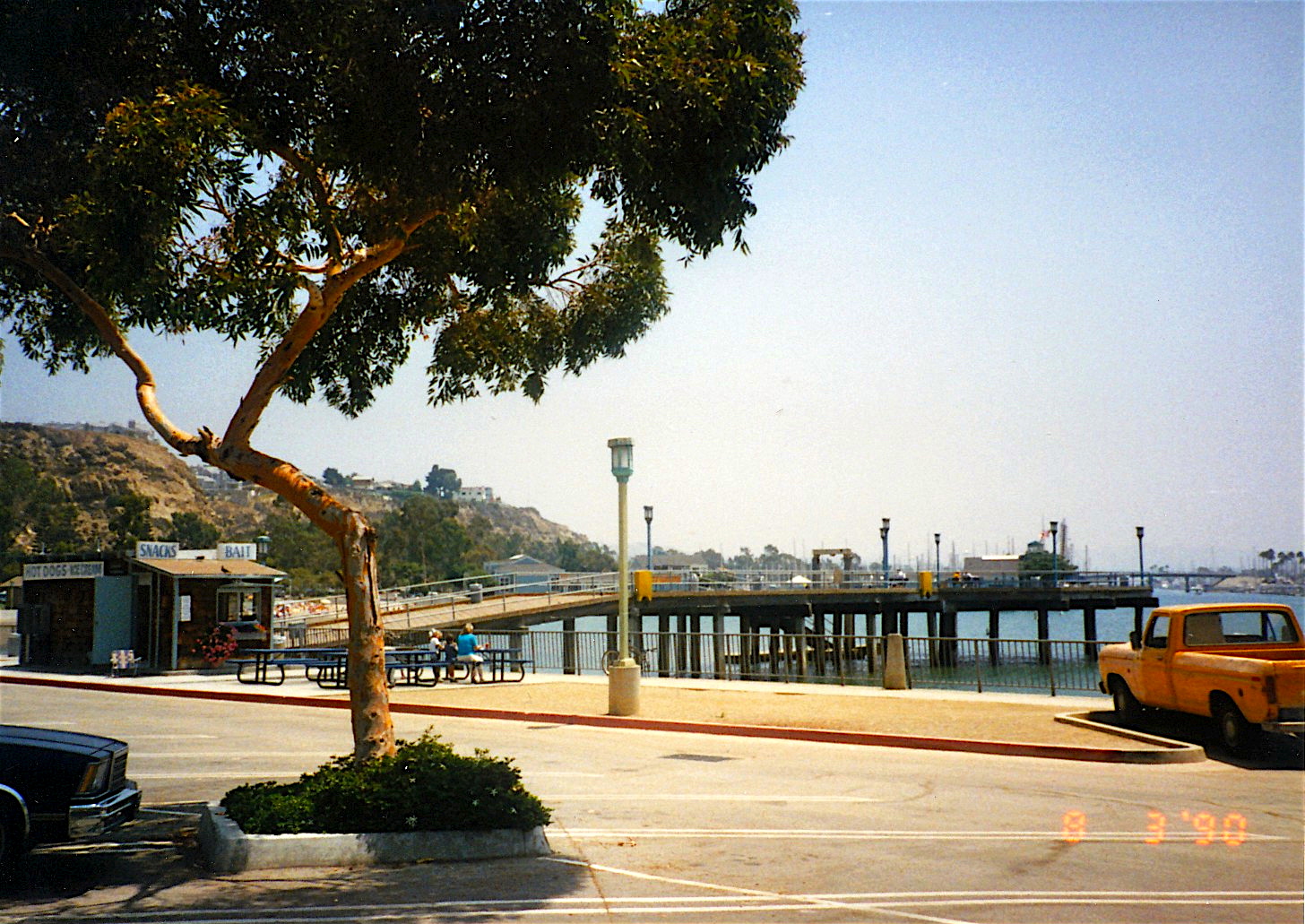 Today the pier’s length is listed as 150 feet. It is, in some ways, an inconsequential fishing pier, but it is also popular with many local anglers and does offer excellent fishing at times.

The harbor and nearby point are named after the author Richard Henry Dana who visited here in 1835. Earliest maps (by Humboldt) called the small bay “Bahia de San Juan Capistrano.”

Hours: Open 24 hours.
Facilities: Most of the facilities were rebuilt in the late 1980s and are in excellent condition. Lights, benches, and a fish cleaning table are on the pier. A small snack bar, which usually carries some bait, is located near the entrance to the pier. Restrooms are located across the street. There is free parking near the front of the pier although signs say no parking between 12 midnight and 6 a.m.
Handicapped Facilities: Handicapped parking and restrooms. The pier surface is wood and the rail height is 40 inches. Posted for handicapped.
How To Get There: The pier is located in the Dana Cove Park area of Dana Point Harbor. From the Pacific Coast Highway take Green Lantern Road south to the harbor, turn left on Cove Road, and follow it to the pier.
Management: Dana Point Harbor District.