With the extension of the Pacific Electric Railway into the area in 1902 both tourism and the city’s population boomed (it was the nation’s fastest growing city during the decade 1900-1910). Visitors found a wide, sandy, and long beach, a pleasure pier, and soon, next to the municipal pier, the “Pike” was developed, an amusement area that stretched almost a mile from Pine Avenue to Ocean Boulevard. The “Pike” would become famous throughout southern California. Attractions included the Looff Carousel, the Walk of a Thousand Lights, and in 1907 a small roller coaster that was simply called The Roller Coaster or The Figure Eight. Eventually the “Pike” itself would gain the nickname “Walk of a Million Lights.”

By 1912 there were several plans to build new roller coasters and new amusement piers. Most of the piers were never finished but E.R. Campbell constructed one in 1915. Known first as the Campbell Pier, it was later known as the Neptune Pier and finally as the Silver Spray Pier. The pier contained a number of what today seem fairly silly attractions—Monkey Dome, Pig Slide, High Brow Pigs, Snake Farm, Hit-the-Coon, skeeball, the Silver Spray Dance Hall and the Mill Chutes roller coaster.

In 1914 the Jackrabbit Racer roller coaster replaced the earlier coaster; it was the largest roller coaster on the West Coast and second largest in America (one at Riverview Park in Chicago was larger). Then, on Memorial Day 1930 a new roller coaster, the Cyclone Racer, opened. It was the world’s longest, fastest and steepest double track roller coaster and it became the final character in the story of the Long Beach coasters. It would last for 38 years, provide an estimated 25 million rides, and finally close on September 15, 1968. 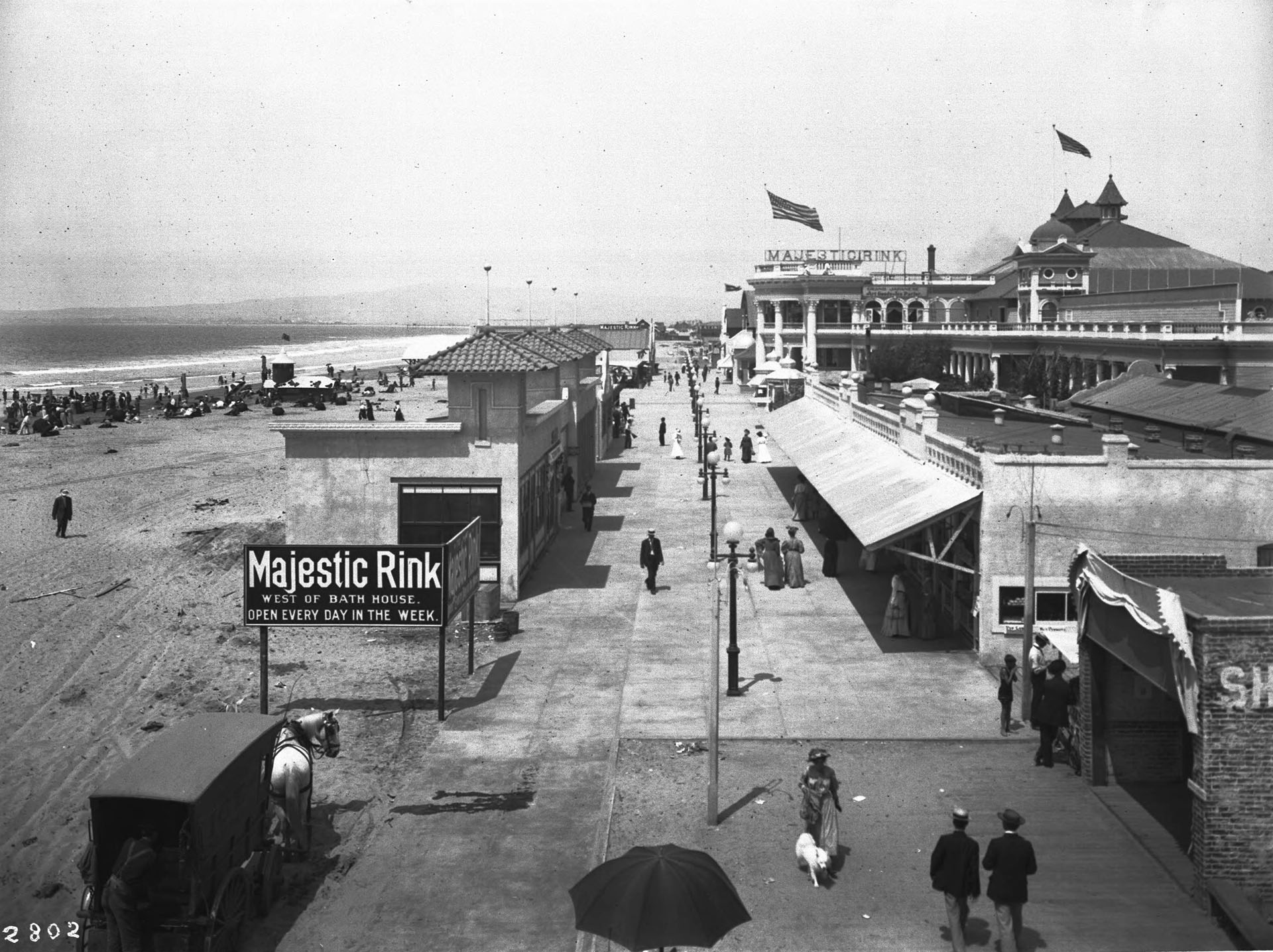 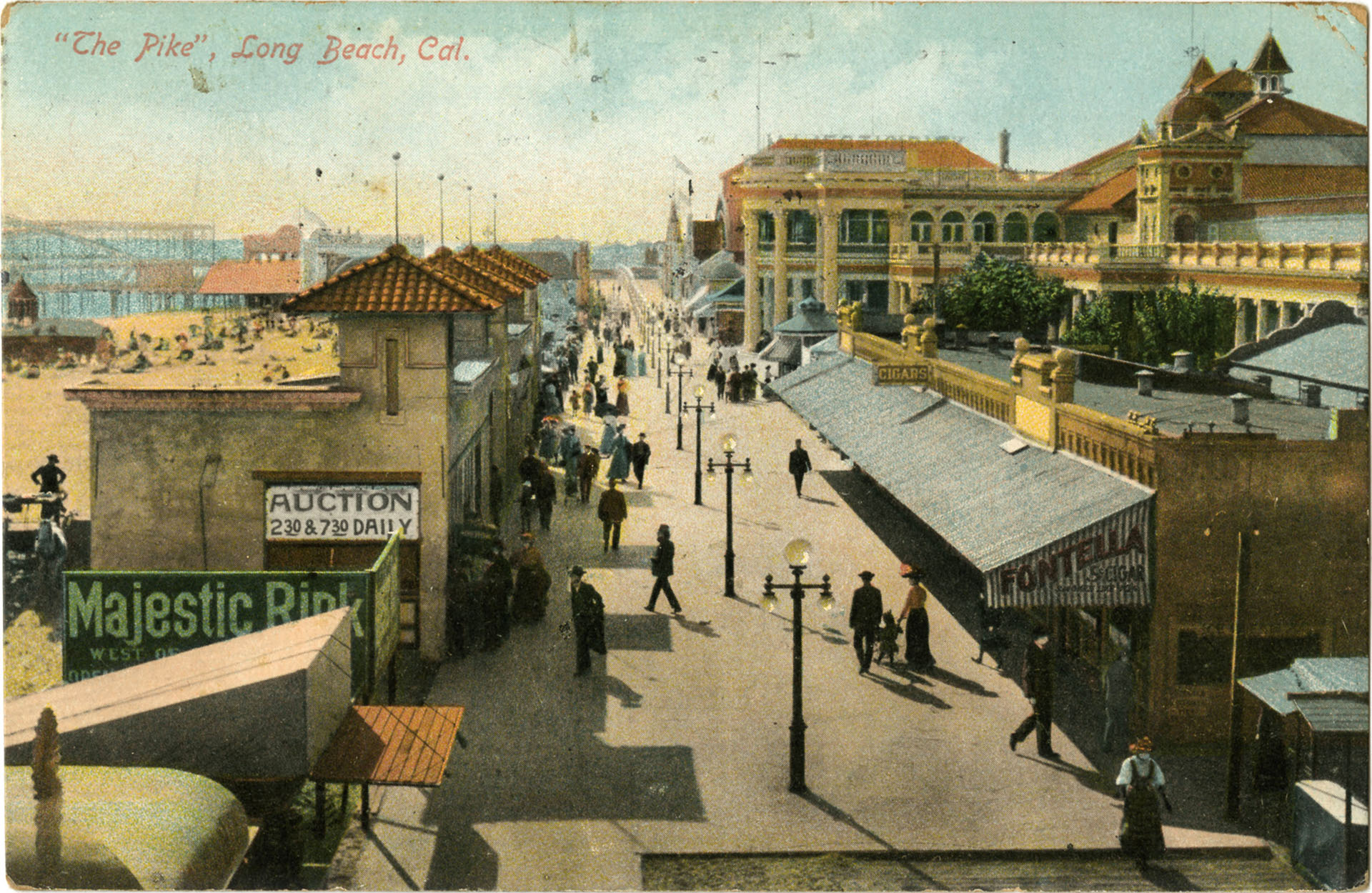 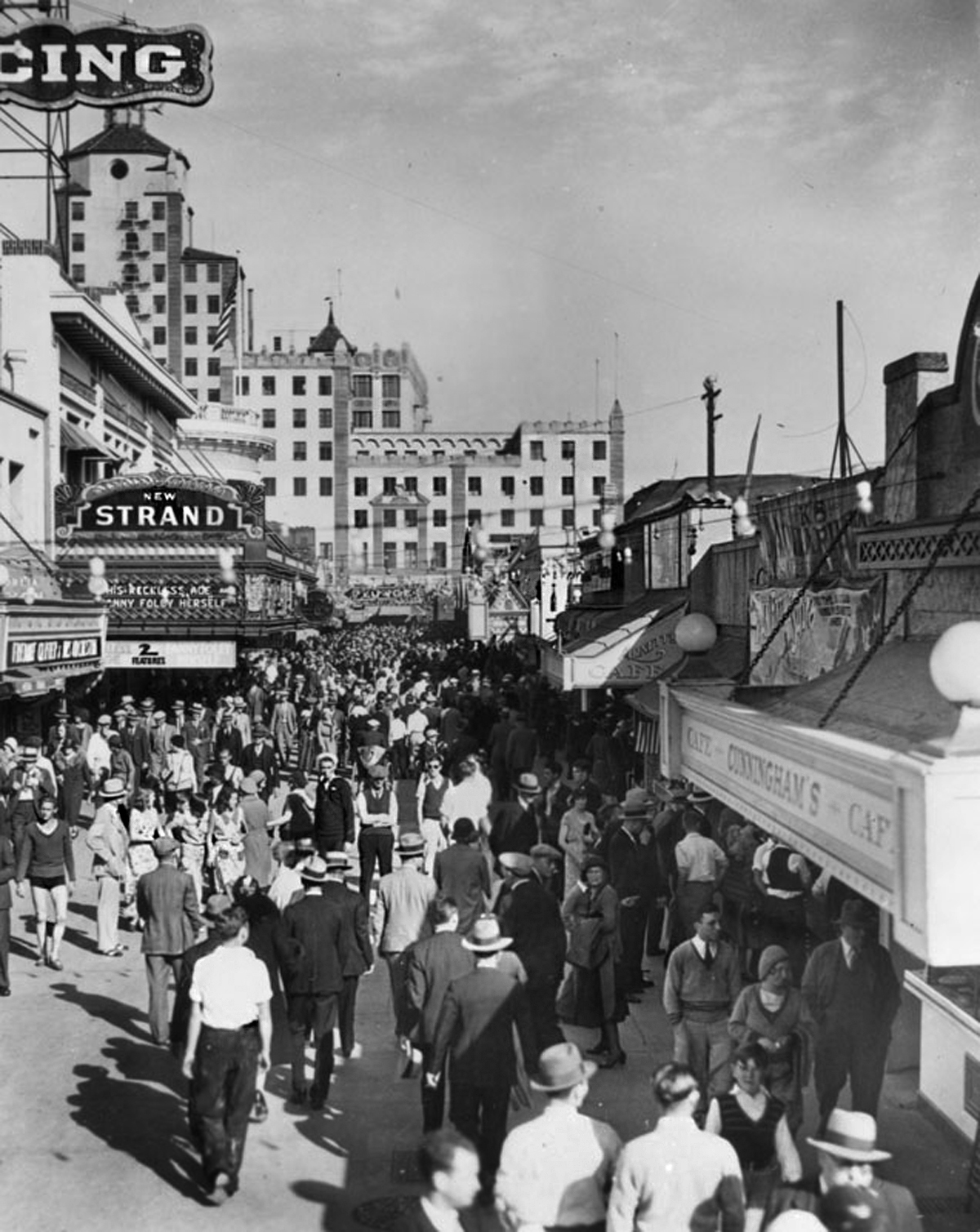 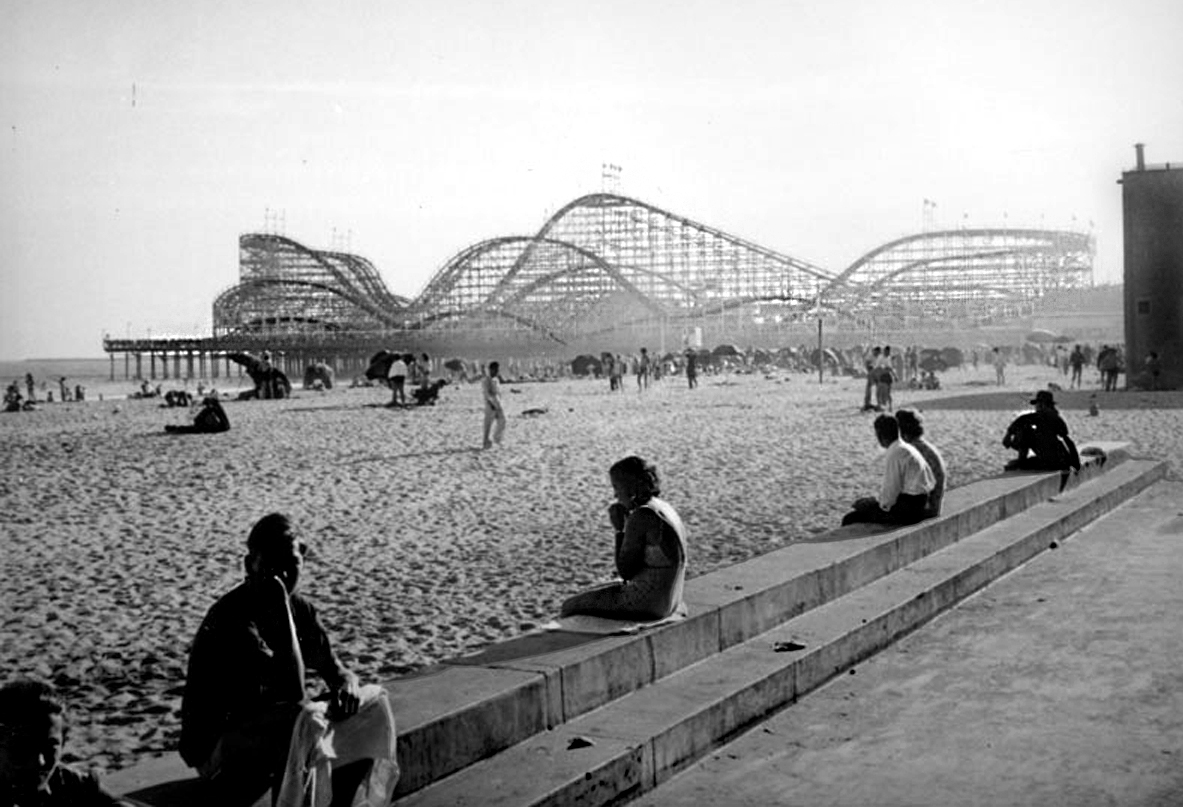 Along the strand, at the foot of Pine Ave., the city’s main street, is the Pike, a raucous amusement area, with roller coasters, side shows, hot dog stands, and similar attractions; staid townspeople rather frown upon it as rowdy and noisy, but they overlook this for the sweet music played by tourists’ and children’s dimes and quarters as they clink at the change booths.  —Workers of the Writer’s Program of the Work Projects Administrationin Southern California, Los Angeles, A Guide to the City and Its Environs, 1951

Sportfishing too was available from the pier. Ed Ries, in Pacific Coast Sportfishing,reported that several boats operated from the Pine Street Pier after about 1914 although handlines and jackpoles were more commonly used than rod and reel. Apparently large inshore runs of albacore occurred during the World War I years and handline trolling was popular, Boats that operated from the pier included the Tillikum, Moonlight, Paul G., Waterwitch, G.W., and Music. By the ‘20s, when live bait began to be carried by the boats, the albacore had decided to move offshore and few were even caught during most of the decade.

The ‘20s also saw the local introduction to barge fishing with the James McKenna(1925 to postwar) and Blue Sea(1928). The ‘30s, perhaps the heyday of barge fishing, saw several additional barges. The Shamrockand Bountywere available most of the decade while the Melrose operated for a few mid-‘30 years in Long Beach waters before moving down to San Clemente. The Samaroperated 1937-38; it would be converted to a floating machine shop in WWII.

A new chapter in the story of the downtown shoreline and piers occurred on July 25, 1931 when the Rainbow Pier was officially opened just to the south of the Pine Avenue Pier. The 3,800-foot, horseshoe-shaped pier, curved offshore from Linden Avenue to Pine Avenue, or a distance of 1,350 feet over the Pacific. It was one of the most impressive piers ever built along the coast (even if angling was only a small part of the pier’s life) and became a “must see” attraction for visitors to Long Beach. The “Pier Without Peer” had a 36-foot-wide roadway built on top of 330,000 tons of rock and supposedly 75,000 people could stand on the pier at one time. Inside the horseshoe was located the Rainbow Lagoon which quickly became one of the best places to swim in the southland, and onshore was built a Municipal Auditorium. At night, multicolored lights reflecting on the lagoon created a rainbow effect.

The Rainbow Pier had first been proposed back in 1910 by businessman S.J. Abrams as a grandiose double-decked Horseshoe Pier. It was to include a “capacious” sun parlor at the outermost point, a public bathing place, a wide space for automobiles, nine landing piers for boats, space on the lower deck for pedestrians and fishermen, and a separate concrete fishing pier extending from the southwest corner. Many of his ideas were later adopted by the city, but it took nearly twenty years and a $2.8 million bond issue in 1928 (for the pier and auditorium) before the pier was built.

Unfortunately what man can create, man and Mother Nature can also destroy. The area began to sink, apparently as a result of local oil wells, and tidal action deposited sand inside the lagoon. As a result of these two changes, the lagoon area was filled with dirt in 1955. In addition, thousands of dollars were required annually for the upkeep of the pier pilings. By the mid ‘60s it was apparent that a major rebuild would be necessary; instead, a decision was made to demolish the pier. March 20, 1966, was the last day of the Rainbow Pier and in its place came a 113-acre landfill that reached, at some points, a quarter-mile seaward.

Today, if you stand at the corner of Pine Avenue and Ocean Avenue and look west, you will see the side of the large Long Beach Convention and Entertainment Center, a pavilion-like steeple at the Shoreline Village, and weird robot-like gantry cranes (which look like something out of the Star Wars movie) off in the distance where the container ships unload. The beachfront area has been replaced by landfill, while roads lead westward to the Shoreline Aquatic Park and Village and the exciting new restaurant and shopping area adjacent to the Aquarium dubbed the “Pike” area (complete with lights that simulate a roller coaster). A freshwater lagoon, adjacent to the convention center retains, perhaps as a small tribute to the pier, the name Rainbow Lagoon Park. What you will not see is that long beach which the young lady and her sailor friends saw, the beach which was the genesis for the city’s name. 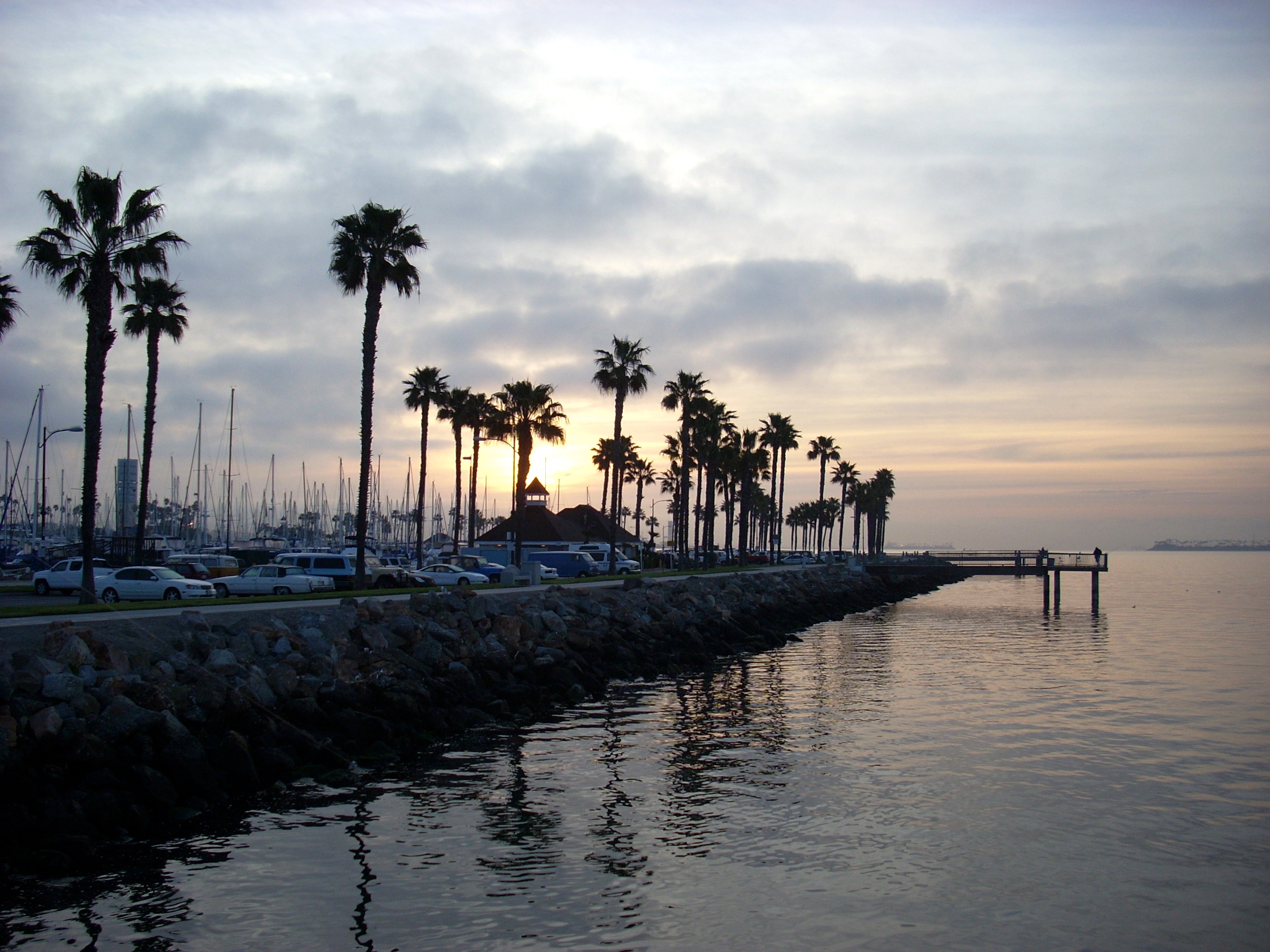 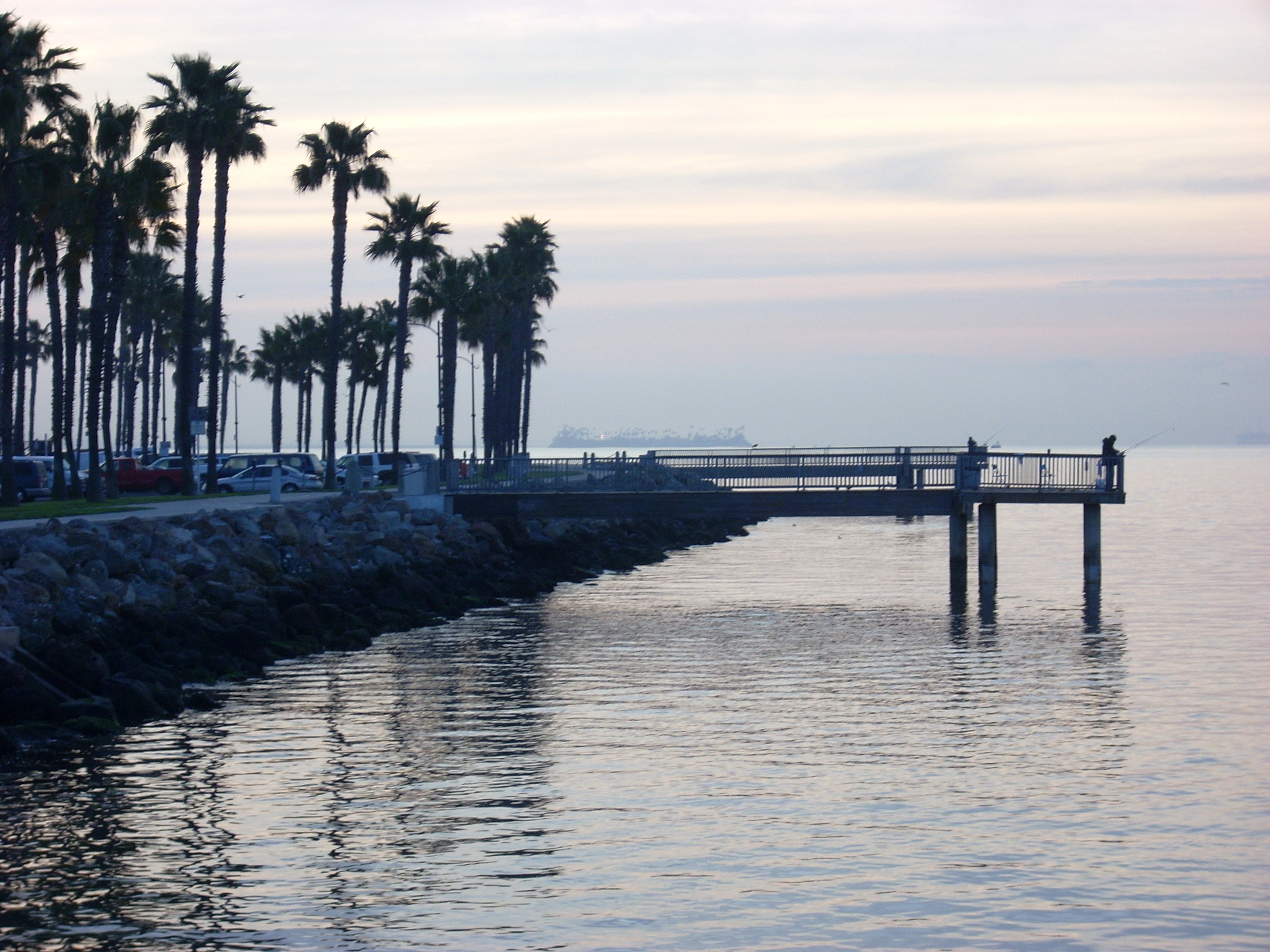 Facilities: Extremely limited. These small piers each hold, at most, 20 people on them at a time, and that would be crowded. There are no lights, benches, fish cleaning stations, or nearby sources of food or bait. There are a few metered parking spaces near the front of each of the piers; parking is $1.00 per hour (bring quarters). There is a public restroom next to Pier #2 but it’s only open during the day.

Handicapped Facilities: Handicapped parking adjacent to most piers; piers have a wooden plank surface and railing are approximately 40 inches high.

Management: City of Long Beach; Department of Parks and Recreation.