September 2006— Jesse Zambata, at Paul’s Bait and Tackle, says there’s been some good action on leopard sharks and shovelnose sharks (guitarfish) for those seeking them out. Yellowfin croaker, BIG sargo, and sand bass are also hitting good. Use ghost shrimp, lugworms or fresh mussels for the croakers and sargo, cut bait or artificials for the sand bass. White croaker (kingfish/tom cod) are also almost always available to those using cut anchovies. A lot of halibut are also showing up, especially for those using live smelt as bait. 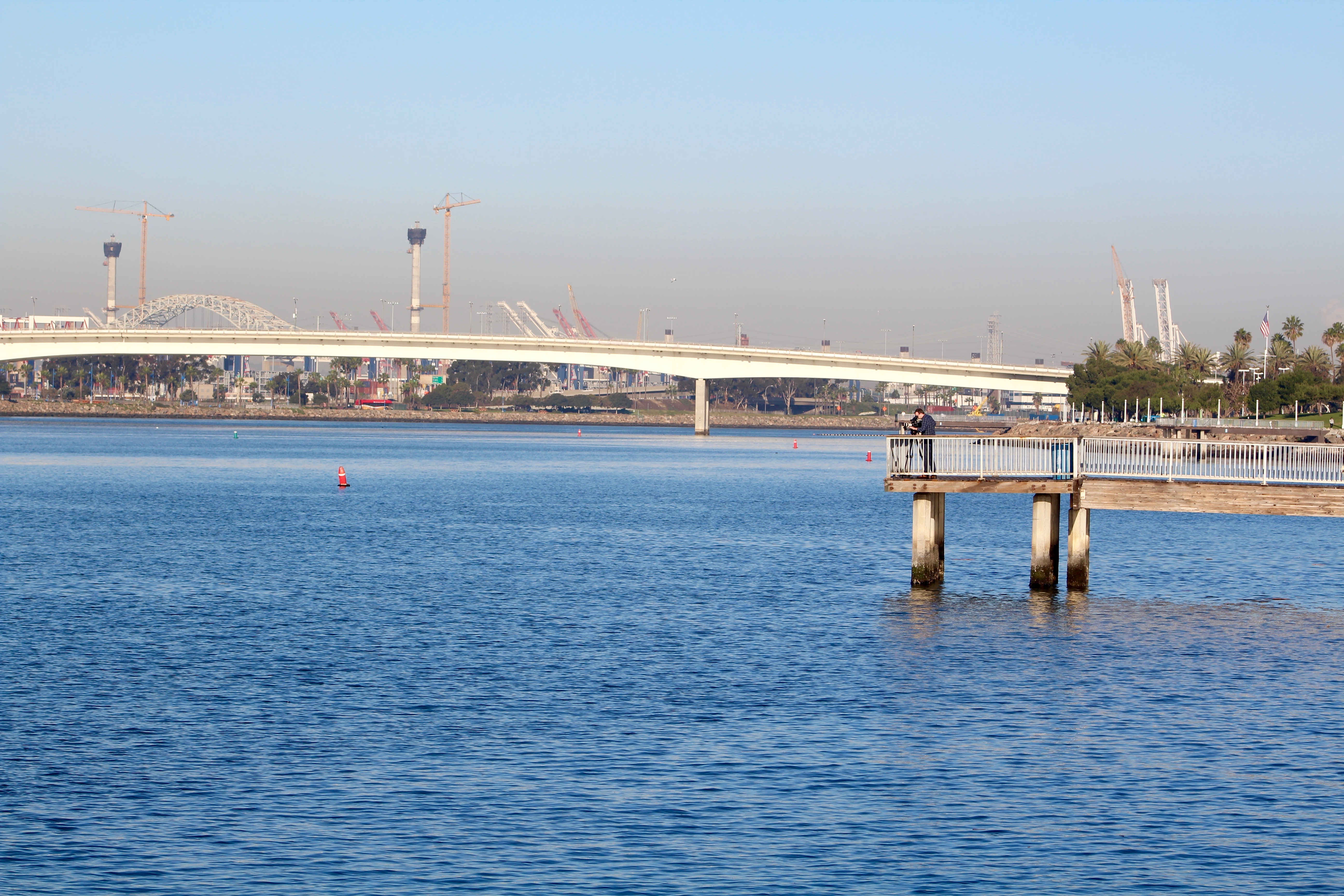 October 2006— Joe, at Paul’s Bait and Tackle, says anglers fishing from the sides of the piers (shallow water) are getting good numbers of sand bass and sargo. He says the sargo are hitting ghost shrimp and lugworms while most sandies are falling to plastics, especially green plastics. He says if you’re getting taps on the ghosties during the retrieve switch to a plastic and it’s probably a sandie. Some corbina and yellowfin croaker are also being taken from the sides of the piers. Casting out from the front of the piers is yielding mackerel, good numbers of keeper halibut, and both leopard sharks and guitarfish (at night).

March 2007— Bill, at Paul’s Bait and Tackle, says anglers continue to take good numbers of buttermouth (black seaperch) and sargo when using ghost shrimp. He says if you’re getting nibbles—but no hits on the retrieve—switch to plastic with maybe a squid trailer. There’s lot of good-sized sand bass around the pier but they’re on a light bite.

August 2007— Bill, at Paul’s Bait and Tackle, said that action is wide open on calicos and BIG halibut. They’re hitting live bait (smelt and ghost shrimp) and a variety of artificials—Krocodiles (blue pattern), white Blams, Holloween and green-speckled Blams (calicos on the orange, sand bass on the green). He says the calicos and halibut are all over that Long Beach area. Other than that it’s the usual smaller fry—buttermouth, smaller croaker and sargo (best at night). All around best bait—ghost shrimp. By the way, he’s been doing a test on Gulp bait. His regulars tell him ghost shrimp out fish the Gulp four to one, lugworms out fish the Gulp two to one.

November 2007— Bill, at Paul’s Bait and Tackle, said it’s “Blam” City at the piers. Regulars have been using Halloween-colored (green and orange) Blam lures to get a steady number of halibut. A 26-pound hallie (caught by Cedric) led the list but many of the fish are keepers. The surprise fish, on the same lure, was a 9-pound striped bass taken by Kevin. He says they are also getting a lot of huge yellowfin croaker and big spotfins on ghost shrimp as well as some calicos and sand bass. The key is to fish the sides and to fish early morning (when it’s dark) or in the evening (when it’s dark). I asked if people used lanterns since there are no lights on the piers but he says most people are now using the Promar lights that fit on your head. Results during the day are totally different.

Special Recommendation. Because of elevated levels of DDT and PCB in tested fish, the Cal OEHHA recommends the following regarding fish caught in Long Beach Harbor. “Anglers should eat no white croaker, and no more than one meal every two weeks of queenfish, black croaker and surfperch.”

<*}}}}}}}}}>< — I always enjoy visiting aquariums and close to these piers is the best aquarium in southern California—the Aquarium of the Pacific. More than 12,000 fish and assorted other creatures are located in four recreated environments—Baja California, cold-water northern Pacific, tropical coral reefs and SoCal kelp forests. If visiting for a few days don’t miss it. Of course it’s a SoCal attraction so it’s almost always busy; visit early on the weekends (get there at the opening 9 A.M. bell) or mid-afternoon (around 2 P.M.) on weekdays. Visit www.aquariumofpacific.orgfor more information. 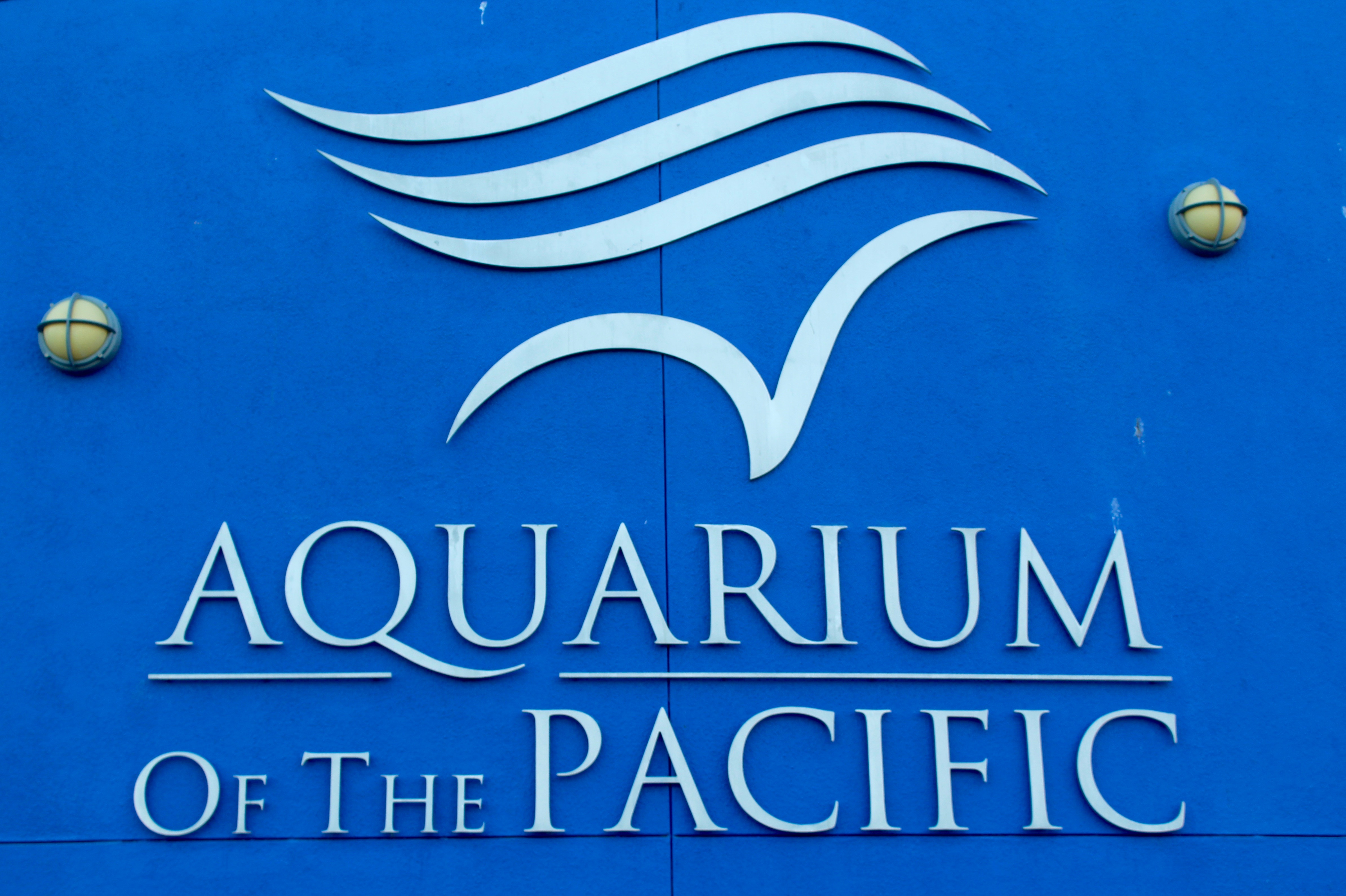 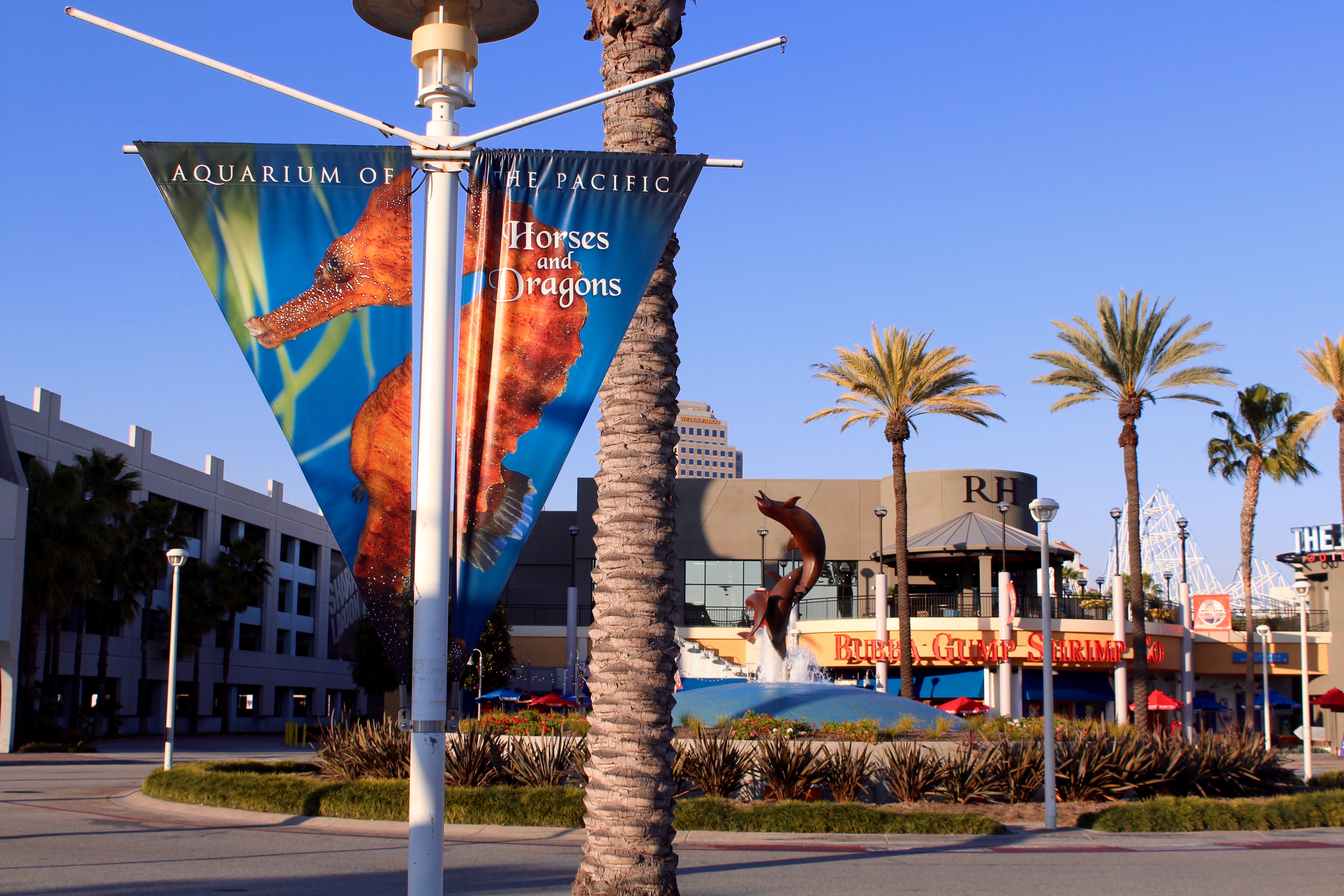 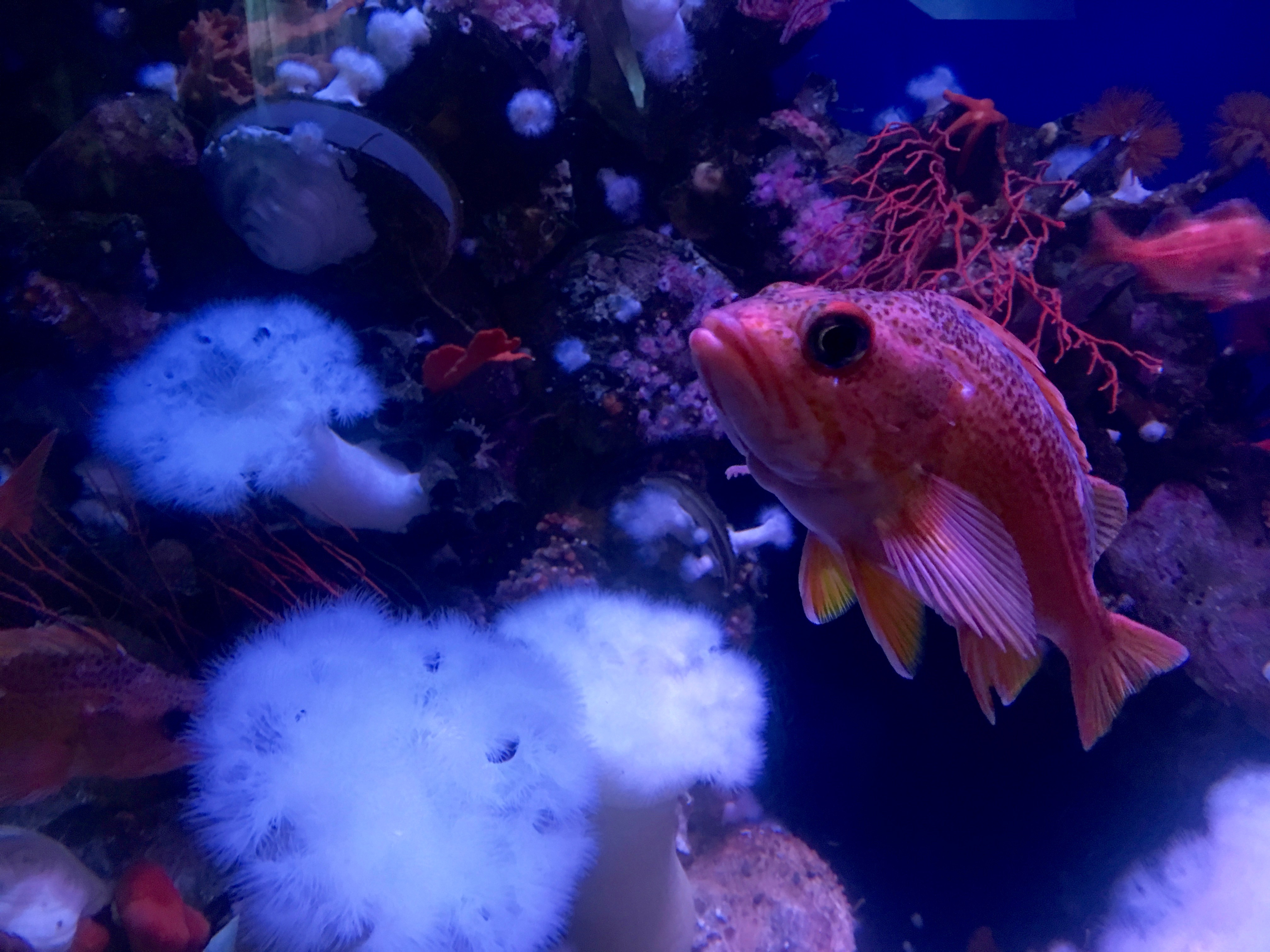 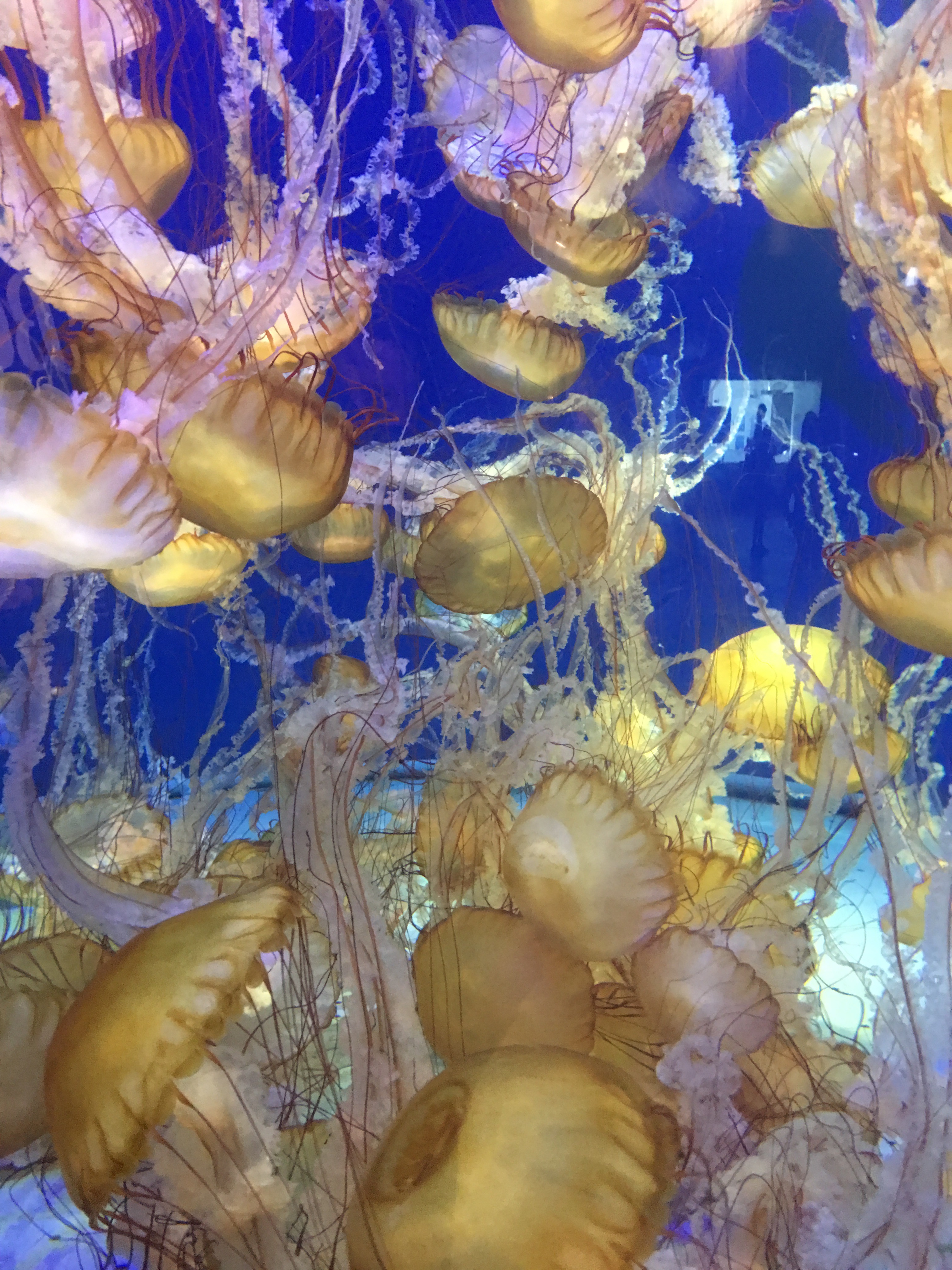 <*}}}}}}}}}>< — CA F&G Bulletin #96 from 1953 states: “Located on the north shore of San Pedro Bay 20 miles south of downtown Los Angeles… On the Long Beach harbor there are unloading docks for market fish and several fish canneries. Over the past 20 years the average landings have been 69,000,000 pounds per year with a peak of 138,000,000 pounds in 1945. The leading species handled have been sardines, yellowfin tuna, skipjack, mackerel, yellowtail, albacore, anchovy, bluefin tuna and abalone. The city has had, throughout the years, several pleasure piers for anglers. At Belmont Shore there is now a modern pier. In 1952 there were 22 party boats and 64 charter boats out of Long Beach. Five fishing barges were anchored offshore.”

<*}}}}}}}}}>< — Although I don’t have many records of the fish from the early day Long Beach piers, a Pacific moonfish (Vomer declivifrons) was recorded as being taken a short ways off the Rainbow Pier on March 18, 1959.

History Note. As mentioned, and although it’s sometimes hard to imagine today, the waterfront area of Long Beach was a fairly typical oceanfront resort at the turn of the century. The Long Beach Land and Water Company had taken over W.E. Wilmore’s failed real estate venue called Wilmore City in the early 1880s. They renamed the area Long Beach, improved the water system, instituted a horse-car line, connected the town with the Wilmington line of the Southern Pacific, built a hotel—and built a pier. Long Beach quickly became a popular destination for those seeking fun and sun in a seaside setting.

The pier built by the water company would be the first of many in the city. It was the Magnolia Avenue Pier, built in 1885 for the princely sum of $4,000. The pier was 700-foot-long, 32-feet-wide and included an underwater light for night fishing. The pier, according to records, quickly proved very popular with the fisherman who caught yellowtail, barracuda and halibut from its deck. A 632-pound jewfish (giant sea bass), caught by William Schilling and his son, was reported from the pier but it’s unclear if the fish was actually caught on the pier or on a boat from the pier. 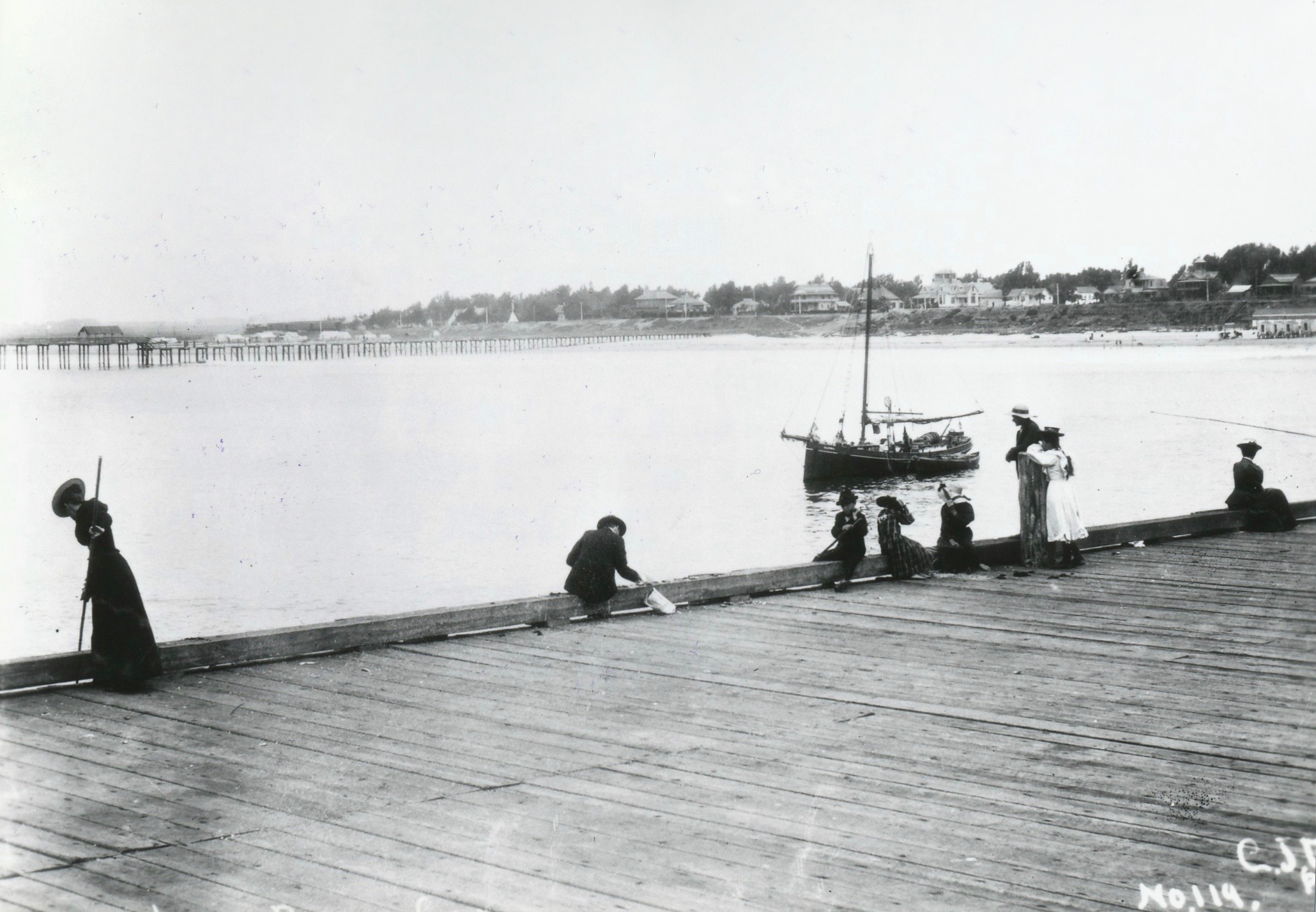 Unfortunately it began to weaken after only five years of use, was declared unsafe, and the shore end of the pier was removed in 1892. Most of the rest of the pier was destroyed by waves in 1900.

Next in line was the original Pine Avenue Pier, the first municipally owned pier on the Pacific Coast. The pier was also the first purchase made by the citizens of Long Beach and perhaps prevented citizens from disincorporating the city (since there was a huge argument over taxes and the lack of services which people felt should have been provided by the taxes). The pier seemed to unite the people and provide a reason for the city government to continue. The Long Beach Eye editorial proclaimed, “we are for the people and the people want a wharf,” and the $15,000 bond issue for the pier passed easily.

The 1,700-foot-long pier opened on May 27,1893, with a celebration that included a barbecue, speeches, and the running of a special midnight tourist train by the Southern Pacific Railroad. Several thousand people visited that first day including many anglers (whose catch was not recorded). The Los Angeles Times reported the event the next day, “Long Beach Wharf—The Only Wharf Free From Taint of Monopoly” (which reflected the fights and the political dirty deeds common among the railroads and politicians during those days). Evidently the only disappointment was the failure of the steamer Rosalieto provide free hourly excursions (because of an accident).

The new pier drew a considerable number of tourists as it provided a home for vendors and entertainment such as a merry-go-round. Buildings sprung up around the pier including a beautiful pavilion that was built at the foot of the pier in 1897. The pavilion was designed for concerts and nightly dances (although dances were limited to Tuesday and Saturday nights after local ministers complained that public money was being used for purposes which they considered morally offensive). Another attraction was the “Spit and Argue Club” which took place down near the shore end of the pier. Anyone could express his views on any subject, crowds were almost always present, and educated and uneducated debate ruled the day. People would bring their source books—including encyclopedias and the Bible—and soon the gathering acquired another name—the “University By The Sea.”

No matter the heavy and diverse use of the Pine Avenue Pier, its days were numbered. It was discovered that the structure of the less-than-ten-year-old pier had been weakened by wood eating teredos (shipworms). Long Beach, a now popular seaside resort and quickly growing town, would need a new pier. In 1903 a bond issue was passed for a new pier

One year later, in 1904, a new steel and concrete, 1,800-foot-long, double-decked pier was built. From the street to the pavilion the width was forty feet wide, the next 1,000 feet saw a width of thirty-two feet, and the final 300 feet of the pier saw a 100-foot width. At the end, the pier sat in water thirty-two feet deep (with the lower deck about 12 feet above the low tide level). It opened on November 12, 1904 and was called at various times the Long Beach Municipal Pier, the New Pine Avenue Pier, and the Long Beach Pleasure Pier.

Whatever its name, it promised fun. A promenade for pleasure seekers as well as landing places for ships and pleasure craft were planned, the famous Sun Parlor was constructed out at the end of the pier, and early pictures show anglers jamming the lower level rails with their long bamboo poles. The city directory proudly proclaimed, “The main interest for the tourist and visitor is the opportunity it affords for an unrivaled marine promenade above the roaring breakers and out over the ocean billows for 1,800 feet.” 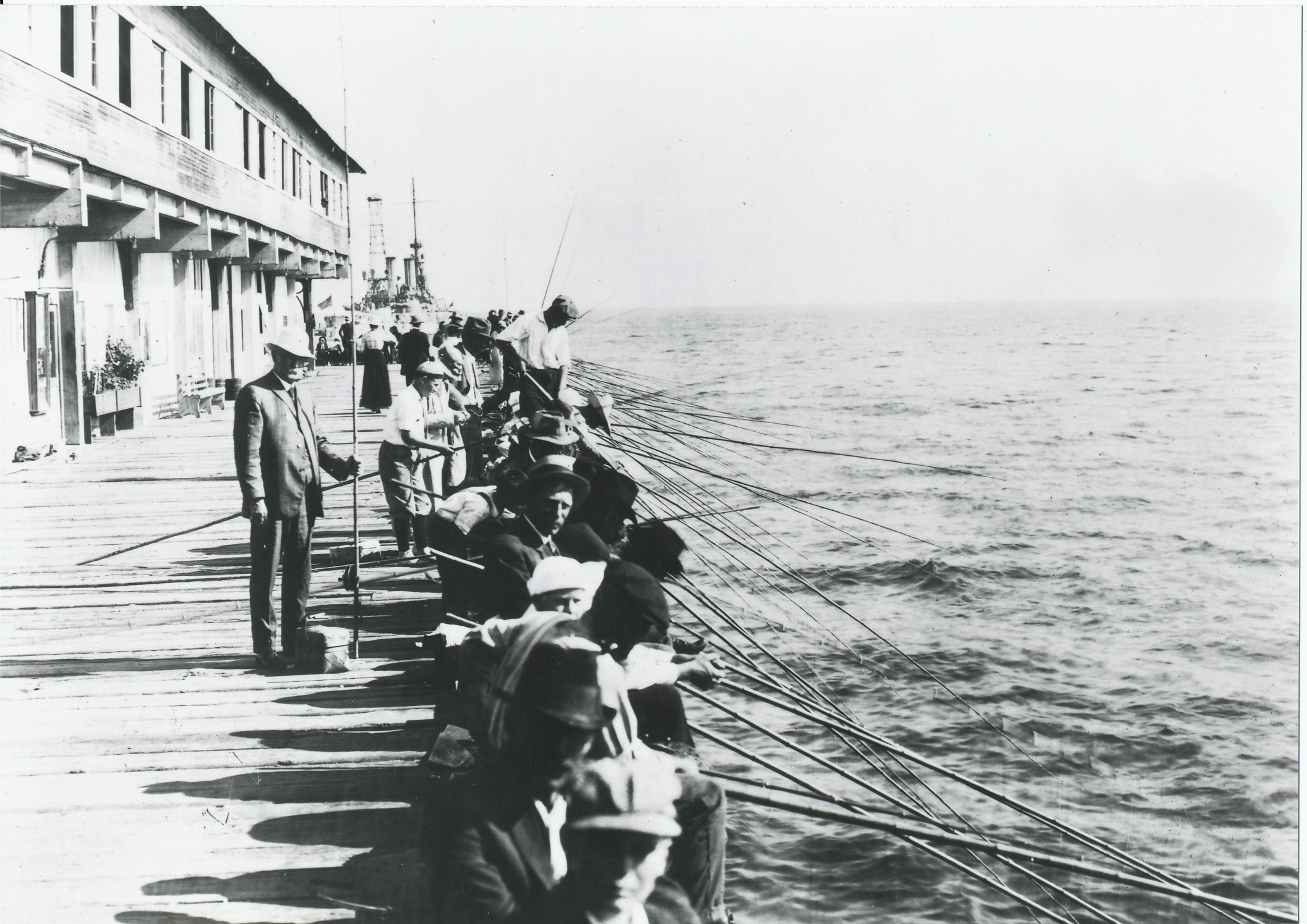 Fishing from the Pine Avenue Pier

Over the years the municipal pier was to suffer the damage that is common to all piers. In 1910 a high tide washed out 80 feet of the pier. On March 11, 1912, the newspaper reported that the “mad fury of a sixty mile gale tears out the south end of the pier,” the next day it recorded that a “gale is raging offshore, yet the pier still stands.” On May 25 the paper reported that the pier is closed due to piling damage from a storm. On September 14, 1921, a report was given that “the Pine Avenue Pier is condemned,” but in 1929 a new report stated that ground breaking for the W.L. Poterfield building marks the beginning of the end for the pier. But, the pier would survive for five more years courtesy of a new pier—the Rainbow Pier. 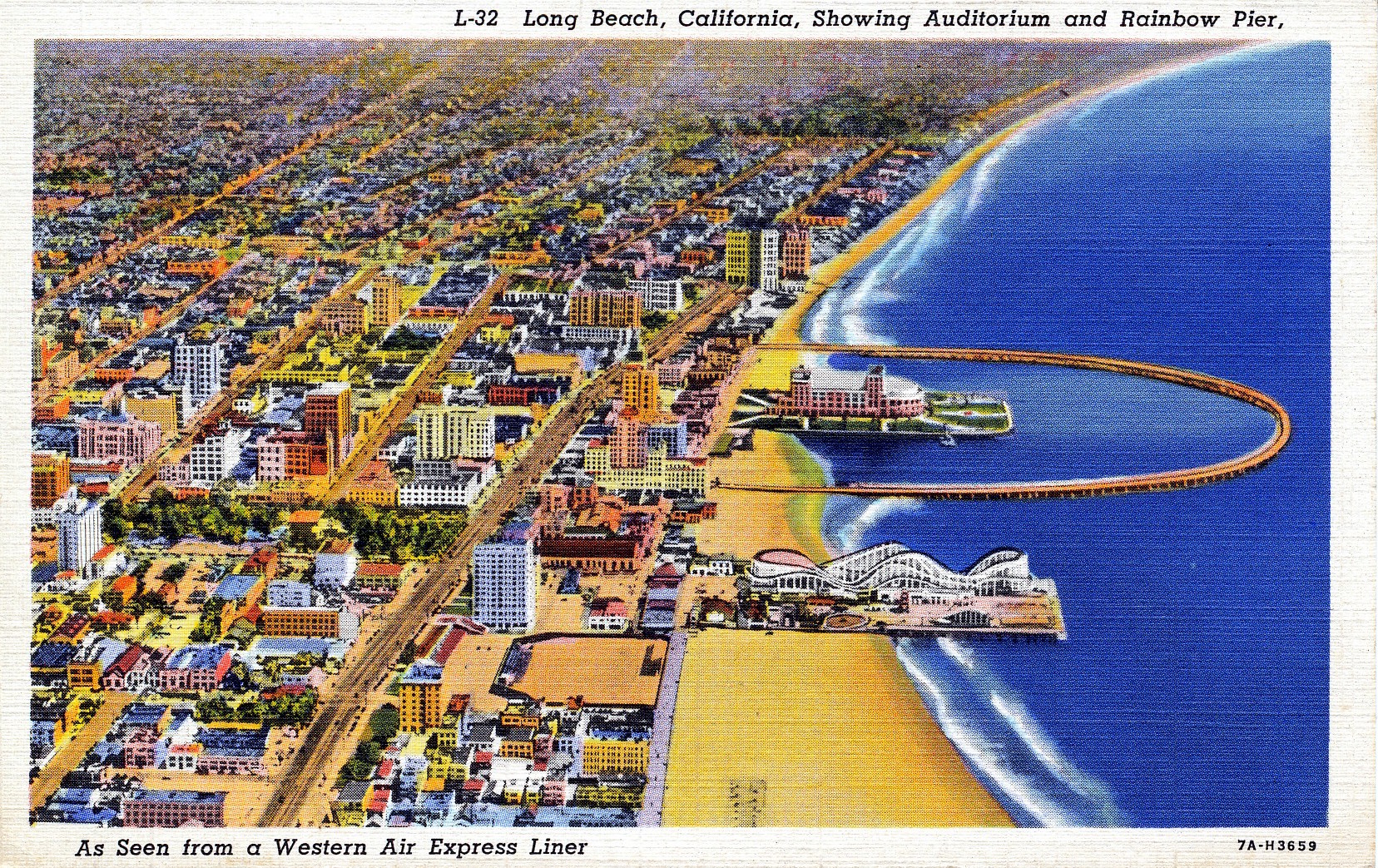 As the Pacific Electric tracks neared their Long Beach terminus, citizens of the seaside resort rushed preparations for the crowds and new way of life the trolleys were expected to bring. The most notable preparations included added safety precautions on the seashore for inlanders who were not accustomed to the rolling surf and city ordinances which sought to protect the dignity of Pine Avenue, the town’s main street, by making it illegal to stroll on the sidewalks either in “beach costume” or carrying fishing poles… The mention of Long Beach always had inspired a tongue-in-cheek attitude among the more sophisticated inlanders. Santa Monica made no secret of being a roaring resort, where one could enjoy the seashore with a glass of beer and revel in non-Victorian activities. Long Beach, with its strict ban on liquor and Sunday closing of most stores, was regarded as the seaside resort for the more conservative elements.