“The CEOs of the oil companies don’t eat fish out of the bay. They fly-fish in British Columbia and Montana,” said Karras of Communities for a Better Environment. 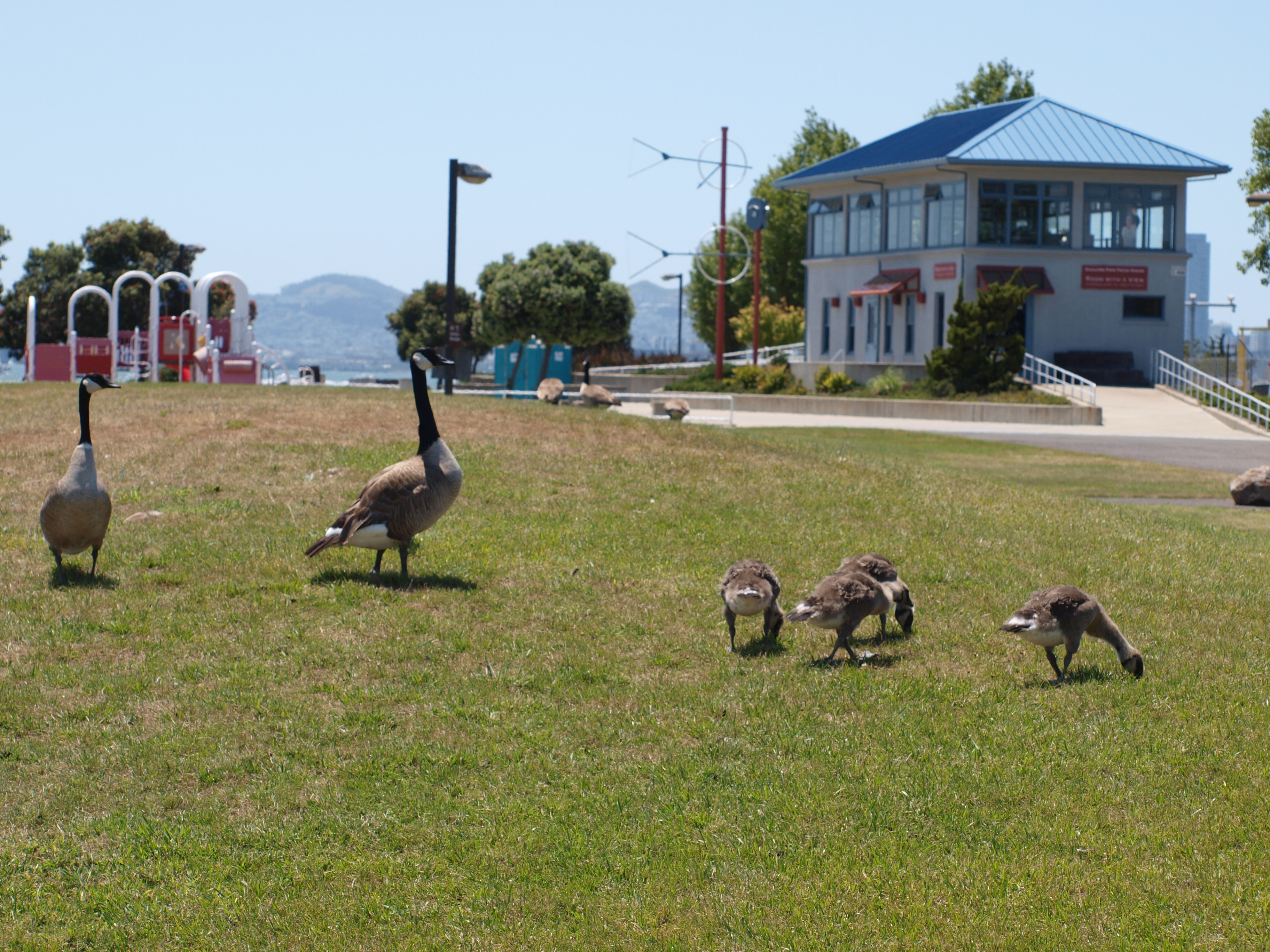 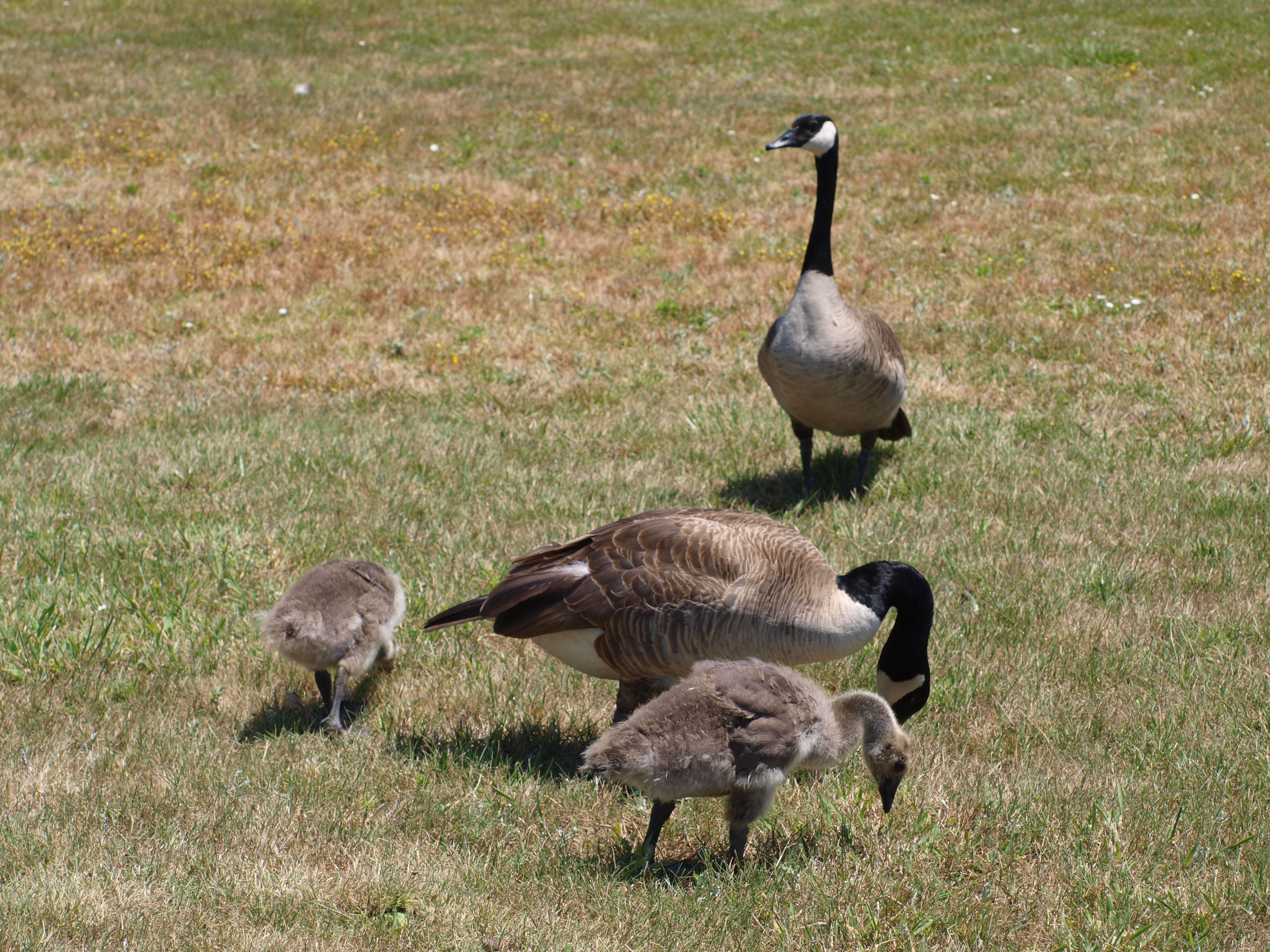 Watch where you walk. There’s a lot of geese and geese poop at the park.

History Note. The entire waterfront along the Oakland Estuary and harbor has undergone significant change since the mid-1800s. The first wharves in Oakland were apparently built by Horace W. Carpentier back in 1853. In 1852 he had acquired a 37-year use of the waterfront and exclusive rights to erect wharves and docks from the town of Oakland. He was to build three wharves initially, one at Main Street, one at either F or G Street, and one at E Street (all of these are in this general vicinity). The action was denounced as illegal and dishonest by many people but nevertheless was approved by the board. He reported completion of the wharves on July 12, 1853. In March 25, 1854, the City of Oakland was incorporated by the State of California and Mr. Carpentier became the cities first mayor.

An original Oakland Pier (basically railroad trestles) was built in 1863 to handle both the passenger and cargo needs of the Central Pacific Railroad. Six years later, in 1869, it was extended out to 6,900 feet. Then, on January 6, 1871, the area’s largest wharf was opened, the two-mile-long Oakland Long Wharf (which almost reached Goat Island, today’s Yerba Buena Island). Transcontinental trains of the Central Pacific (as well as local passenger trains) ran right out to the end of the pier where they met the various sailing ships of the day.

With the completion of the Long Wharf (which ran parallel to the Oakland Pier), major changes were in store for the older pier and the adjacent lands. The trestle pier was filled in and covered by dirt creating an earth embankment which reached out nearly two miles into the bay. This embankment, called the Oakland Mole, opened on January 22, 1882. Once the Mole was opened, the use of the Long Wharf was restricted to freight traffic while passengers were moved down to a new Oakland Pier at the end of the Mole. The Central Pacific (later Southern Pacific) Railroad, which owned both the Wharf and the Mole, continued its industrial development of the waterfront area near the northern end of the Inner Harbor and the Outer Harbor. Although the Long Wharf would cease to handle freight in 1918, the Mole and the Oakland Pier would continue to be used until 1958. The Oakland Pier itself was demolished in 1966.

Another huge project and pier was that of the Key Route Ferry which started in 1903 and paralleled today’s eastern approach to the Bay Bridge. A rock causeway led to a wooden trestle and then to the pier holding the ferry slips and terminal; total length was again over two miles. In 1933 a fire destroyed part of the terminal and pier but it was rebuilt. More permanent was the danger posed by the completion of the lower deck of the San Francisco-Oakland Bay Bridge in 1939 (which carried two tracks for interurban trains). The ferries were no longer needed (although they continued to haul workers, and then visitors, to the Golden Gate International Exposition on Treasure Island in 1939 and 1940). The end of the fair saw the end of the Key System.

Interesting to me are the early day stories which tell of fish being caught off of the Oakland Pier, the Long Wharf, the Oakland Mole and other piers and wharves found in the area. Most amazing are the number of salmon and steelhead that evidently were caught in these waters every fall. Also apparently common were smelt, perch and sharks. The jacksmelt, perch and sharks are still there, but you would have to be very lucky to hook a salmon or steelhead today. A few articles —

“During the (eighteen) sixties, seventies, and eighties, thousands of so-called ‘grilse’ or ‘salmon trout’ were caught by hook and line by fishermen fishing off ‘Meiggs Wharf,’ from the wharfs all along the San Francisco waterfront, and off the Oakland Mole. On any Sunday during the fall months of these years hundreds of fishermen could be seen all along the wharfs of San Francisco Bay and the Oakland Mole fishing for steelhead trout. The rig used by these fishermen was similar to that used by smelt fishermen, being a bamboo cane pole, cork float, and hooks baited with mussel, pile or angle worms, and fresh shrimps.”

West Oakland — The murky mornings of the past few days, while disagreeable to humanity in general, have been hailed with delight by the anglers on the Long Wharf, and big catches of fish, such as smelt, rock-cod, rom-cod, etc., are reported by local fishermen. The waters about the bay in the neighborhood of the Wharf and Mole still swarm with small sharks, and to a great extent interfere with anglers. These young monsters of the deep bite at anything from a carpet tack to a railroad spike, and the fishermen’s angle and grub worm bait have no chance whatever. The young sharks, in several instances, are reported to have swallowed the hooks and then bit the line in two.

The Old Long Wharf — The Oakland Long Wharf as it was called, was an early institution on the western waterfront. It started from about where the Albers dock is now located at the foot of Seventh Street and ran out into the Bay until deep water was reached on a line with the present Key Route slips. To the old Long Wharf came all kinds of ships, but mainly sail driven craft. The wharf was a shipping point for sugar as well as other types of general cargo. The tall-masted ships, in or outbound to the ports of the South Seas would line in alongside the bulkheads and with whips rigged to their yardarms would sling the various shipments aboard or onto the dock.

The wharf was supposed to be forbidden territory to small boys and fishermen but many were the times when the youth of Oakland sneaked out there and dropped their lines overboard. The watchmen were tolerant as long as the fishermen did not get in the way of the dockworkers.

In those days sturgeon were plentiful in the Bay but they were hard for the average youngster to catch or land. Then one bright genius conceived the idea of attaching a stout cord, with hooks and bait, to a Standard Oil coal oil can. With this as a float the largest sturgeon found it impossible to sound and break the tackle after being hooked.

But amusing experiences sometimes took place when one of the big fish became so hooked. The Dogwatch remembers once how he and a couple of friends had gone after sturgeons and managed to hook a big one. This fish was a fighter and instead of being in after tiring itself out by battling the oilcan, it seemed to grow stronger. Then it took off down the face of the wharf towing the buoy with it. At the time the wharf was lined with a large number of grownup fishermen not at all interested in sturgeon. As the big fish and its can came tearing along there was a general tangling of lines many of which were whipped into the Bay and lost. During the ensuing snarl-up the Dogwatch and his companions laid down their lines and made a fast sneak away from the Long Wharf. If they hadn’t they would have been tossed into the Bay wit h their sturgeon by the irate fishermen on the dock.

Hours: Supposedly sunrise to 10 PM although some sources say open 24 hours a day.
Facilities: Free parking, restrooms, picnic tables, drinking fountains, a playground, and a snack bar with some bait and tackle are all located near the entrance to the park. Benches, lights, fish cutting boards (bravo!) and a fish cleaning station are found on the pier. Additional restrooms and drinking fountains are located adjacent to the pier.
Handicapped Facilities: Handicapped parking and restrooms. The deck of the pier is wood and somewhat dangerous for wheelchairs and the pier railing is 44 inches high.
How To Get There: Located at the end of 7th Street in Oakland. From San Francisco leave Interstate 80 at the West Grand Avenue exit, soon you will see the Harbor Terminals exit, go south on Maritime Street till you hit Seventh Street, turn right and follow the street to the park and pier. From Interstate 880 take the Eighth Street exit and go west to Peralta, turn left on Peralta and then right onto Seventh Street; follow it to the park and pier.
Management: Port of Oakland.