Species: Squatina californica (Ayres, 1859); from the Latin squatina (an ancient name for a related Mediterranean species) and californica (describing where the fish was first caught).

Identification: These sharks look like a ray, or a cross between a shark and a ray and are often mistaken for rays by anglers. However, a couple of items gives them away: (1) angel sharks have a flattened body similar to rays but have broad pectoral fins that are unattached to the head, and (2) the mouths of angel sharks are up front of the head, not underneath as in rays. Their camouflage coloring, typically sandy gray, gray brown, or reddish with dark spots, allows them to lie relatively unnoticed on the bottom. The belly is white. Angel sharks are unique in that the lower lobe of the tail is longer than the upper lobe.

Size: Reaches a length of nearly six feet (68.9 inches) and a size of 60 pounds. Most caught from piers are under 4 feet in length. 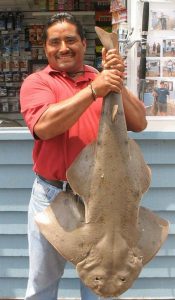 Angel shark from the Oceanside Pier in 2012

Habitat: Offshore and in shallow bays in sand or mud bottoms near rocky reefs. Found from surf zone down to 672 feet. Primarily feeds at night and their main foods are fish and shellfish (although they’ll settle for squid, octopi, sea cucumbers and other unusual tidbits in order to maintain a well balanced and nutritional diet). Some sources say one of their main foods is California halibut. So flatties beware! Angels are bottom lurkers and ambush predators that like to lie partially buried in the sand awaiting unsuspecting prey to wander by. When fish and other organisims, aka food, come close, angels use their protrusible and highly expandable mouths (armed with big teeth) to quickly inhale the unlucky prey. Perhaps the prey should have been praying since they don’t have a prayer of a chance. 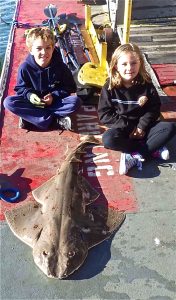 Angel shark from the Capitola Wharf

Bait and Tackle: Medium tackle, 30-pound or so line with size 2-4/0 hooks should suffice for these beasts.

Food Value: The flesh is considered good quality and very good eating. As a result, they have become the object of a considerable commercial fishery. The flavor is mild, the texture is firm, the flakes are large and they are moderate in fat content. Generally considered suitable for all methods of cooking. 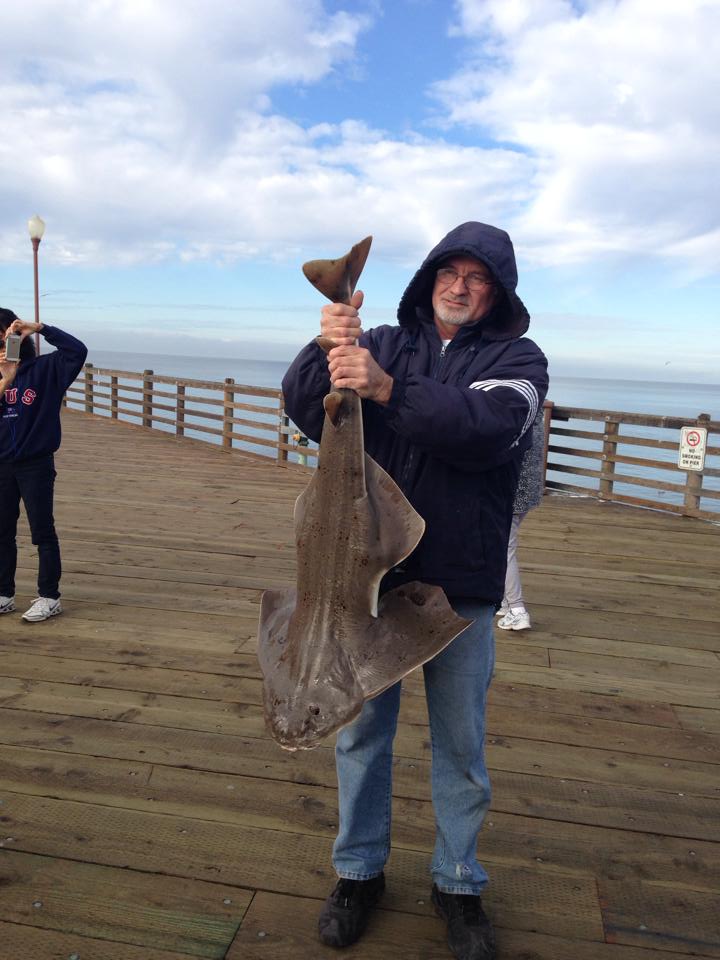 Angel shark from the Oceanside Pier — 2014

Comments: Their name is derived from the large pectoral fins that remind many of angel wings (and how about a buffalo wing and angel wing combo plate?). As mentioned, these guys (or girls) have the nasty habit of extending out their jaws in an explosive manner to capture food and, unfortunately, quite a few anglers have been bitten by angel sharks after the fish were landed. Never stick your hand or arm near the mouth of an angel shark unless you are absolutely sure it is dead.

Angel Sharks from piers —An uncommon shark that when caught are often good size.