But did ya step on some of those spines in bare feet? 😉 j/k Congratulations is all I can say right now and that I am glad that I was there to witness the monumental occasion. It was meant for me to be there as I was up ’til 4 am the night before after fishing at Coyote Point ‘til 2am the CRW canceling a mission this morning. On top of that I had an awakening call that sent me running into the pouring down rain to fish with you. Fate/Destiny/Karma

Maybe you brought Mel some luck! I’m glad Red was there. 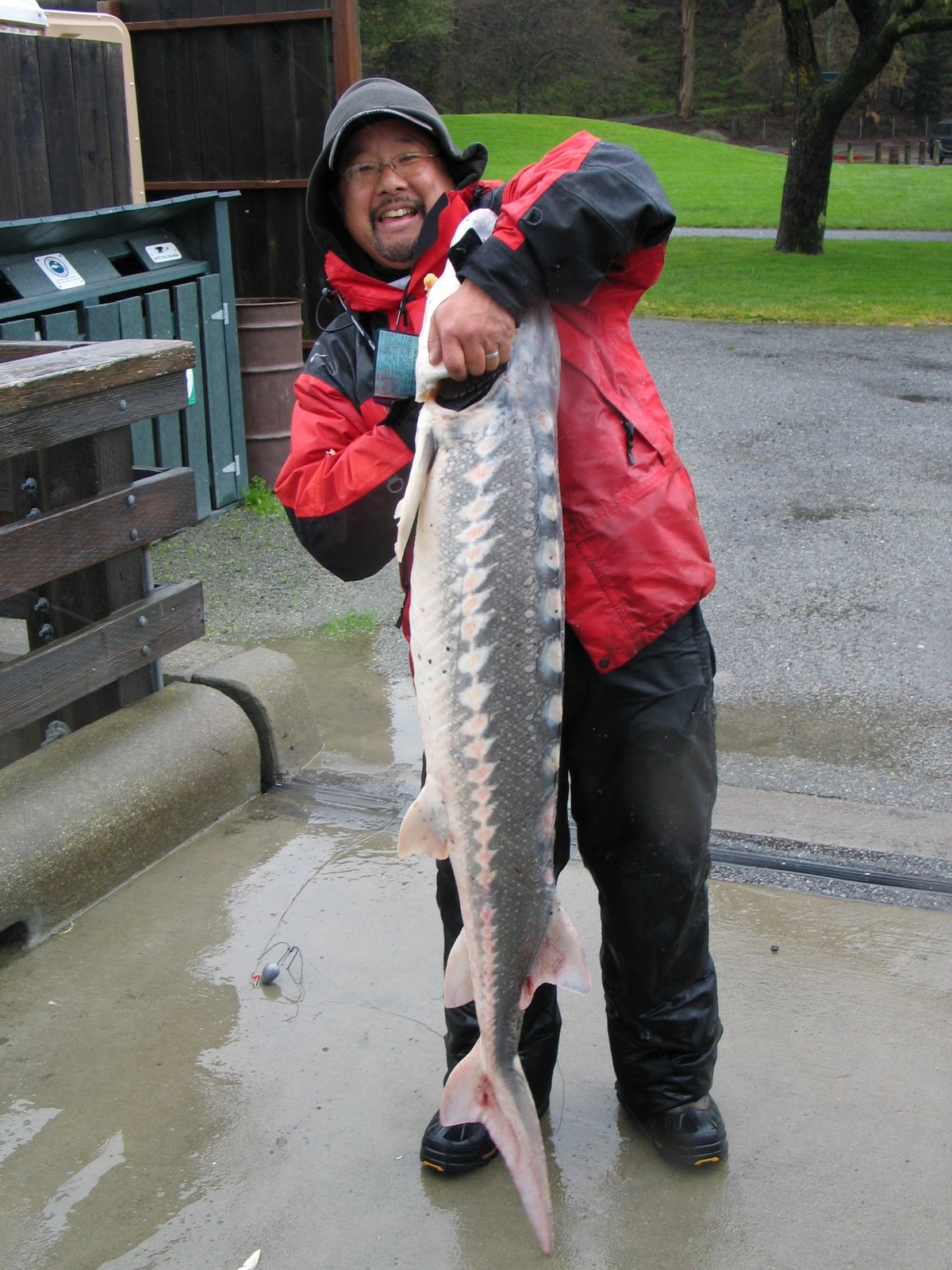 I’m glad everyone who was there was there! Everyone played a part in my catching that fish. I’m really sorry that we didn’t get pics of Red taking a header into the water right before he grabbed the fish. I was horrified! Not because Red might hurt himself but he almost landed on my fish! J/K! I had my canopy up and the five of us bunched up underneath it to stay out of the all day constant rain. It was like Red said, one of the funniest times on what could’ve been a gloomy day for all. I feel like I just won the Super Bowl or the World Series. Everything just fell into place, including the crappy weather. It seemed like it took hours to bring that thing in, as walking a big fish down the pier is not easy. Lucky for me the current wasn’t really kicking today. I would’ve been in big trouble with an opposite current and more of a crowd. I even had to climb over the sink because I didn’t want to take my eyes off the sturgy. What’s next? Don’t know yet. I’ll think of something.

Here’s Mel and a YouTube video of him catching a 67.5 inch sturgeon from the pier. 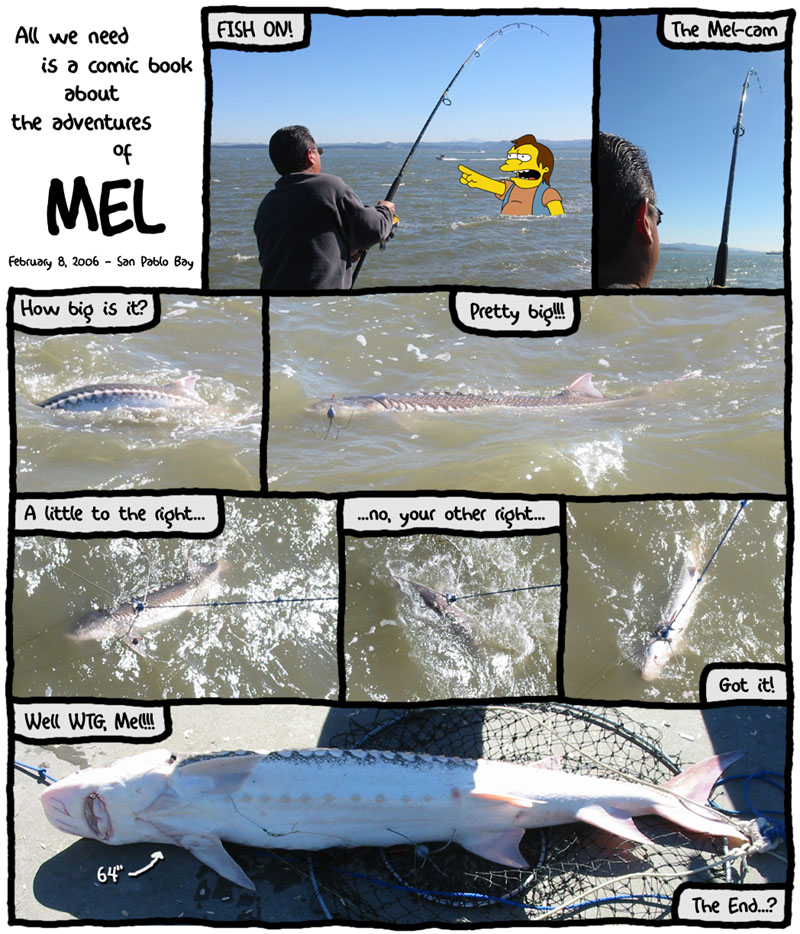 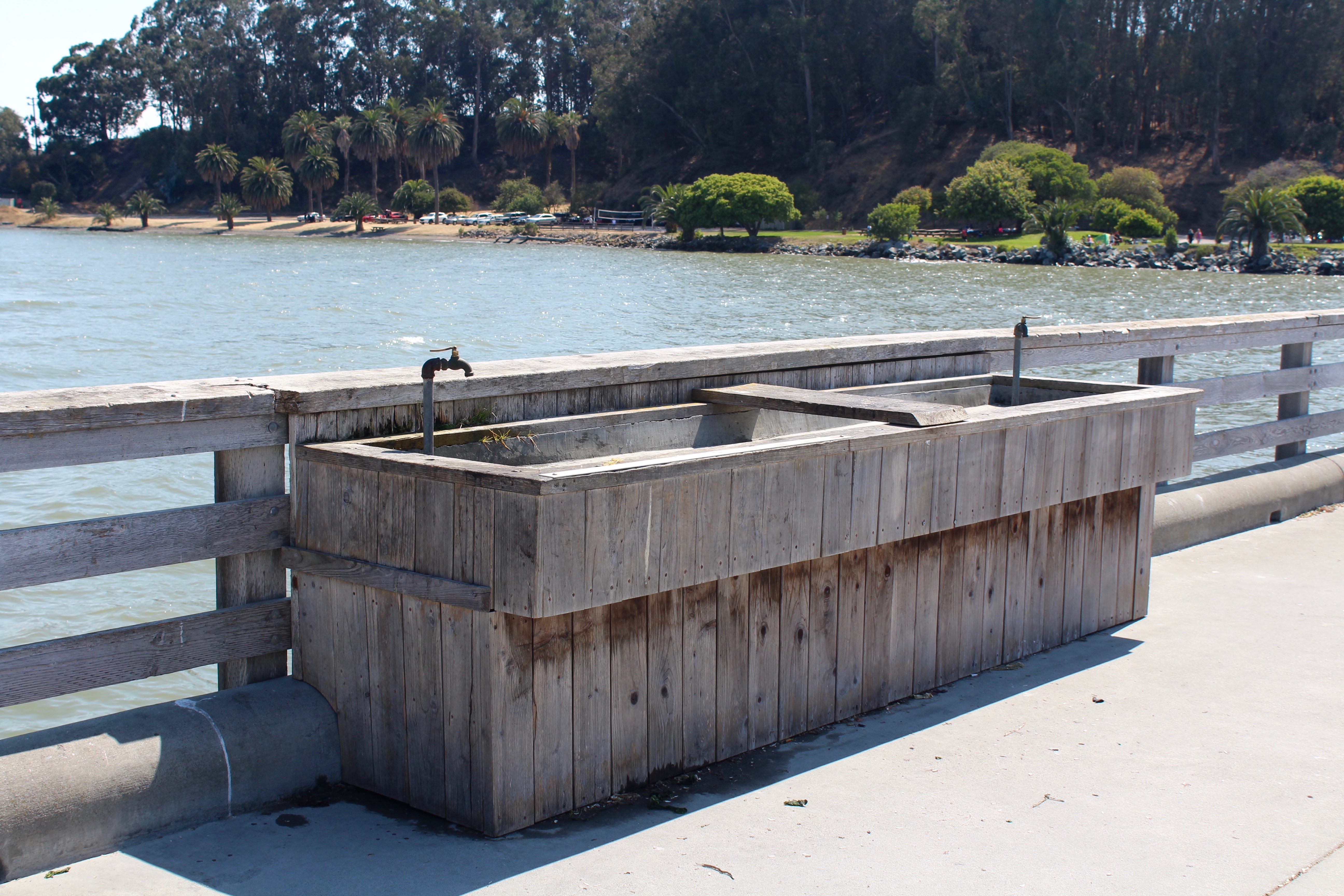 McNears Landing (Point San Pedro) — San Pablo Strait connects San Francisco North Bay with San Pablo Bay. On the northwest side of the strait is Point San Pedro, better known to fishermen as McNears Point. McNears Landing is just north of the point on San Pablo Bay. Point San Pedro was first known as Point Abastos. Later (1811) the present name was given by one of the Padres. This should not be confused with San Pedro Point on the coast of San Mateo County. McNears Landing has been a fishing port for more than 50 years. Shrimp fishermen and set liners made headquarters there. In 1927 or 1928 there were four or five shrimp camps near here but only one inactive camp remains. During the height of the sardine fishery there were three canning or reduction plants at this place and during the nine-year period 1937–45 the sardine landings averaged about 21 million pounds per year. Since then two of the plants have been dismantled and the remaining one has not operated recently. The last sardine landings were made in 1950 and since then fish deliveries at this port have been negligible. For many years a large rock quarry has operated at the point. Just a little way northwest of the point is the campground and resort area of McNears Beach. From this campground there is sport skiff fishing, especially during the striped bass season. 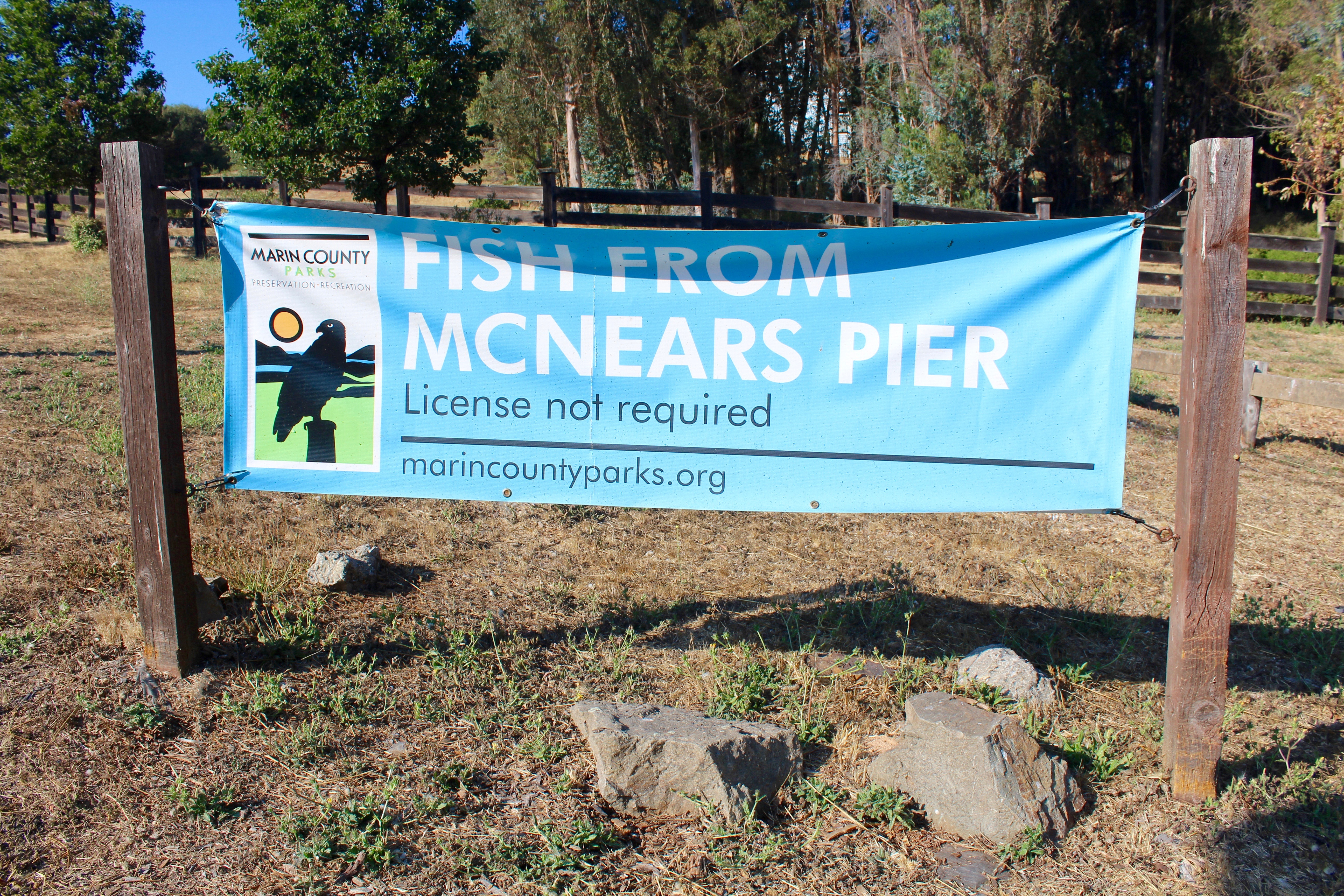 History Note. Although the fish bulletin above gives credit to the McNears name to “one of the padres,” most sources say the park is named after John McNear who owned this land and the nearby brick-making operation at Point San Pedro back in the 1880s. 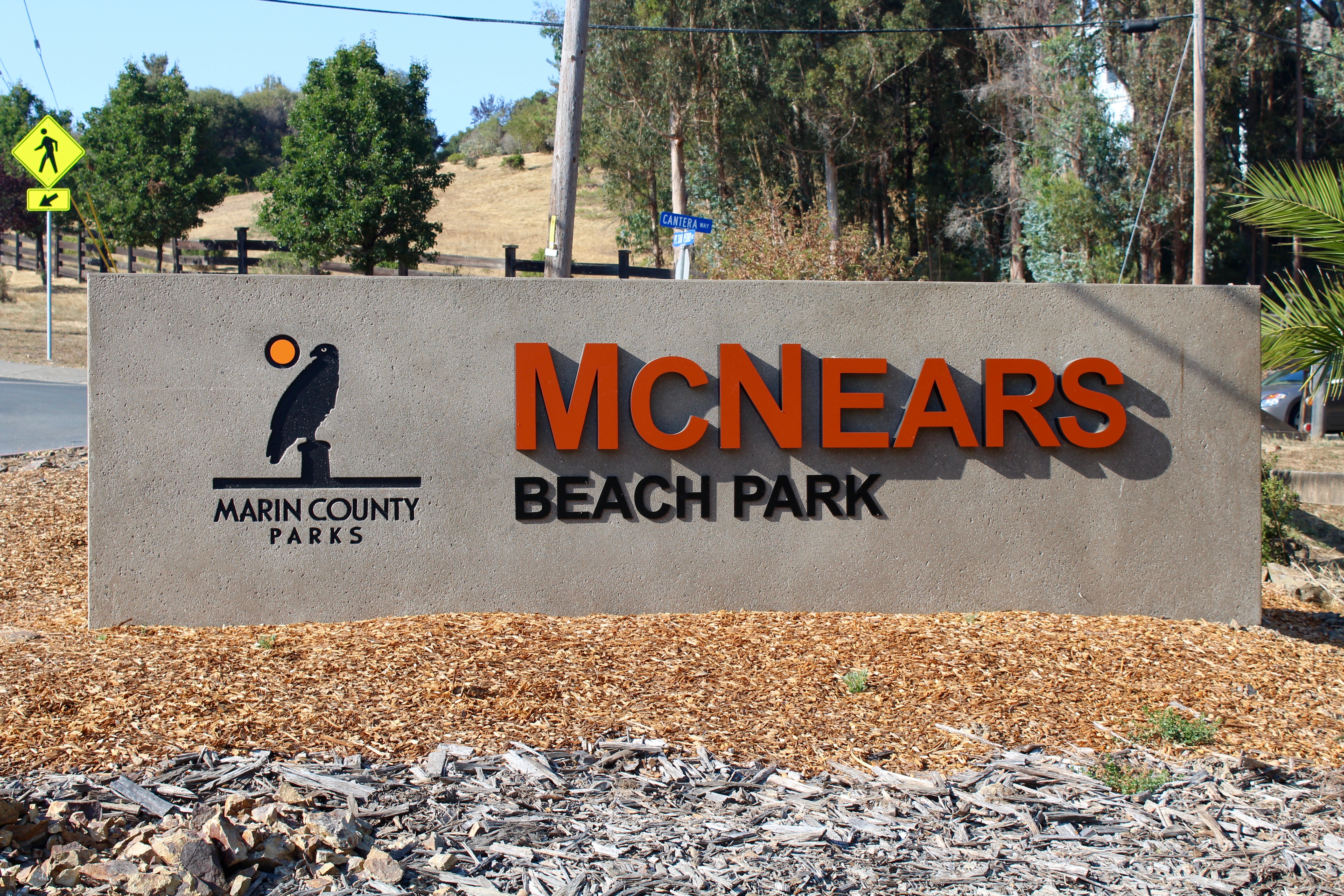 Facilities: There are benches, water faucets and fish cleaning stations on the pier. There are no lights on the pier. Adjacent to the parking lot are two portable restrooms. Nearby is the snack bar; adjacent to it are a swimming pool, tennis courts, and extensive lawn areas. Entrance cost to the park varies: the walk-in fee is $2; car costs vary depending upon season. An August visit was $10.

Handicapped Facilities: Some handicapped parking spaces. The surface of the pier is concrete and the railing is approximately 40 inches high.

How To Get There: From Highway 101 take Point San Pedro Road east — follow it for approximately 8 miles to the park entrance and road.